Director :  Tom Harper
Year Of Release :  2014
Principal Cast :  Phoebe Fox, Jeremy Irvine, Helen McCrory, Adrian Rawlins, Leanne Best, Ned Dennehy.
Approx Running Time :   98 Minutes
Synopsis: Seized by the government and converted into a military mental hospital during World War II, the sudden arrival of affected children to Eel Marsh House has awoken its darkest inhabitant. Eve, a beautiful young nurse, is sent to the house to care for the children, but soon realizes she must save them from more than their own demons. Despite Eve’s efforts to stop her, one by one they fall victim to the Woman in Black.
What we think :  Leisurely paced sequel is nowhere near as skin-crawling as its predecessor; the cast are game for it, and Tom Harper has a keen eye for period detail, but as a scare-fest, Angel of Death leaves most of its good stuff until the end, and then it’s too late. If you enjoyed the first you might enjoy this, but remember to keep your expectations low.

The surprise success of 2012’s The Woman in Black, a feature starring Harry Potter alum Daniel Radcliffe, was always going to ensure a sequel. Angel Of Death, the nomenclature subtitle of said sequel, lacks Radcliffe’s presence, and to a large degree removes a lot about what made the first film really rather effective, but as a work of scare-fiction, it does some nice work with limited material. Others may find Angel Of Death a drudge and a chore to watch – it’s a plodding opening half that removes a lot of creepy atmosphere the film’s final third ramps up – but on the whole, for a small-budget chiller, it’s satisfactory. 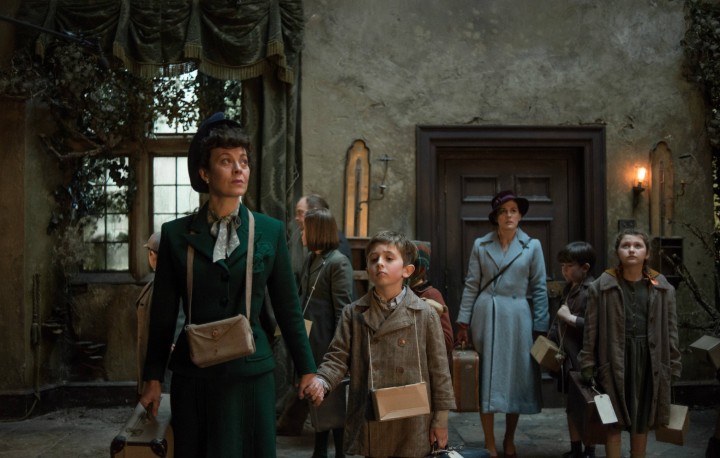 So you’re stuck in a ghost movie, and you don’t know what to do? Doors creak open by themselves, usually in the dark when there’s nobody in that room down the hall? Windows slide shut (or bang) in the dark? Cupboards groan with the weight of some unearthly inhabitant, when all you’re trying to do is store your latest purchase of Dolces? Kitchen utensils suddenly clank for no reason other than to startle you? Then may I suggest that perhaps Angel Of Death isn’t for you? In fact, I could suggest an exorcism, but most people who need one generally don’t believe in ghosts until it’s way too late. The Woman In Black: Angel Of Death, eschews modern scare sensibilities and aims directly for mood and atmosphere. Think Sixth Sense rather than Freddy Krueger, an often tingly venture into chills that…. well, doesn’t work as well as you’d hope, and avoids actual tension thanks to a lackluster screenplay. 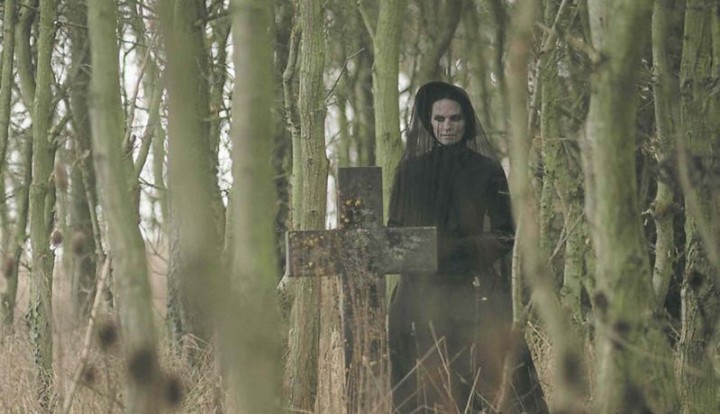 Set during the midst of the Blitz of London, Angel of Death is one of those “roll your eyes” plot setups that, if you don’t buy into it, ruins the rest of the film. A bus load of Blitz orphans and children, led by carer Eve Parkins (Phoebe Fox), become stranded inside a run-down building known as Eel House, where they’re tormented by the titular lady sans color. Yep, it’s pretty simple, and the film’s breezy set-up belies much of the dramatic weight within what little character development the movie has. The addition of plentiful children to kill is particularly eerie, almost taboo. Jon Croker’s slow-burn screenplay wobbles its dialogue between awful and adequate, with faux emotional content magnifying the harsh deficit of actual characters. With the exception of Fox’s Eve Parkins, nobody else in this film is really developed much past 1-dimension.

Although often starkly dramatic in terms of visual cues and tone, and with the presence of so much death all around anyway, Angel Of Death didn’t really have to go very far to accentuate the inbuilt tension of the scenario. What’s annoying is that the film doesn’t really reach into its potential at all; in aiming to match the original film’s simplistic scares and elemental fright, it actually swerves into cliche and frustrating predictability. Nobody smiles, lights don’t work, the sun barely rises, and the manifestation of the Woman herself is aided by CG and cast with a pall of shadow and darkness. 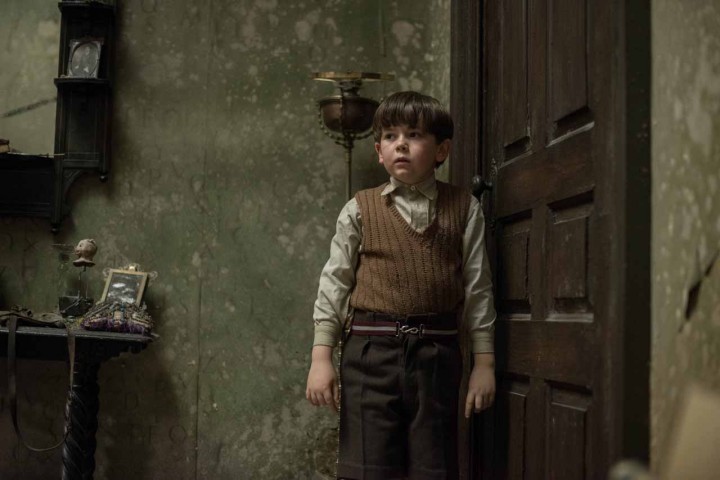 One thing I’m not a fan of in these kinds of movies is a malevolent spirit that cannot be stopped. The “inexorable evil” overtaking everyone in the film has become so passe in the last few years, so much so that it’s actually started to bore me. The original film’s disquiet in this regard was telling – aside from Radcliffe’s performance and the utter stylishness of the end product, I’d have regarded it as a lesser work in the genre – here, Angel Of Death lacks the same grace of subtlety, instead relying on a grab bag of spine-chilling jump-cuts and creaky, groaning sound design to inflict maximum scares. But there’s no intelligence, just raw, unfiltered atmosphere here, which will make the hardest scare-fan yawn more often than not. 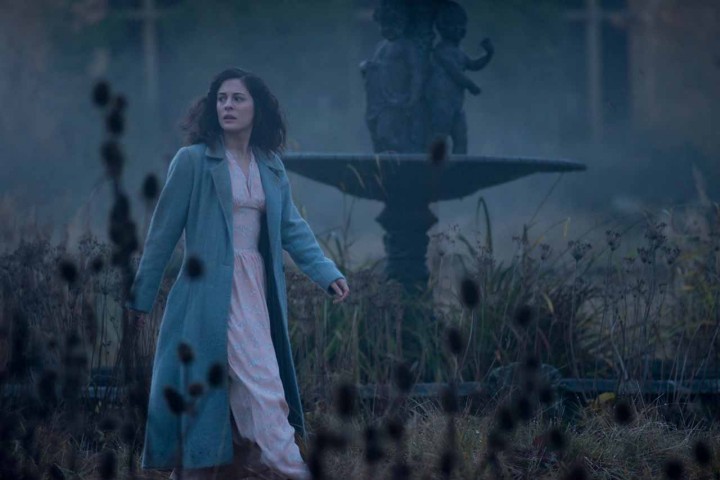 Part of what drew me to this film was its visual similarities to the recent Aussie film, The Babadook. Angel of Death contains a similar dearth of complexity, a pared-back monochrome tableaux which is more than suitable for a film such as this – the effort is for naught, though, with few genuine scares to speak of. The turgid opening half, in which the mood is set, lacks punch, and the final half becomes a mixture of screaming, running, breathless exhortations and invariably, death. The inexplicably malevolent Woman pops in later in the film, a malignant force of darkness whose increase in “power” as the film progresses is never explained. Exactly why this evil spirit goes from simply making doors creak and toys clatter, to running rampant through the building and terrorizing everyone openly, is never explained.

The cast perform with expected perfunctory naturalness – Phoebe Fox is genteel and virginal as the film’s nastiness warrants, while War Horse star Jeremy Irvine is sweet as the square-jawed war veteran with a dark secret. The headmistress, Ms Hogg (Harry Potter’s Narcissa Malfoy, Helen McCrory) is a straight stick in the mud, and the rag-tag team of kids range from bullies, mutes, orphans and everything in between. Naturally, the conduit for the Woman is strongest through the kids. Nobody here really puts a foot wrong, at least in terms of acting and believability, but without much depth beyond genre cliches, the “story” part of the film tends to bog down in inevitability. There’s no “freshness” here. 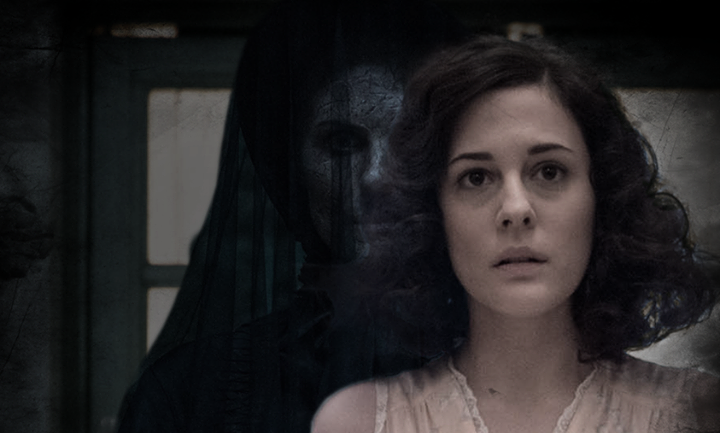 Angel of Death’s compulsion for atmosphere over story robs the film of genuine conviction. Iconic moments of fear are drowned out by an abundance of orchestral braggadocio, characters behave as inanely as you would inside a nightmare. The story seems to drag, and the melancholic, dreary tone actually starts to work against the movie. As far as sequels go, Angel of Death does little to movie the franchise in a good direction – as a stand-alone creep-flick, mood and visual tricks will only get you so far, and this one doesn’t get very far at all.