I’m only surprised nobody thought to throw in the kitchen sink. I mean, this film has it all. And that’s not good.

Sequels to cinematic successes are fraught with danger. Most of the time, audiences simply want to see the same characters again, doing similar things, and (mostly) using a similar template to the original film. Filming two sequels at the same time, in the hope they’ll both be a success, is an even more perilous scenario – if the first sequel bombs, you still have to release the second one, hoping to recoup your money. For the first and second Pirates Of The Caribbean sequels, Dead Man’s Chest and At World’s End, you’d hardly describe them as “bombs” in the true sense of the word; At World’s End, then the most expensive movie ever made at around $300m, made a staggering $960m at the box office, but as we all know, box office success doesn’t always make it a good film. Michael Bay will attest to that. With the first Pirates movie being both a box-office and a critical success (a rare double feat in blockbuster entertainment), and Dead Man’s Chest meeting with decidedly mixed reviews, At World’s End had to recapture the spirit of the original movie, and conclude the adventures of an apparently deceased Jack Sparrow (who dove into the maw of the Kraken at the end of the previous film) and a recently revived Barbossa (who was killed off at the end of Curse Of The Black Pearl, and who makes his triumphant return in a shattering cliffhanger in Dead Man’s Chest). Does At World’s End meet the expectations of Pirates fans the world over, or is the film a middling mess of high-seas hijinks that makes little sense whatsoever?

At its basic core, At World’s End is a staggering mess. A conniption of story-telling yips and a clusterf@ck of characters doing nothing whatsoever to earn them any audience favors, At World’s End is a hodge-podge of awkward humour, graceless action, mind-numbing spectacle, and a refusal to focus on any single story element for more than a minute at a time. Whereas the original film had charm and a freedom to adhere to nobody at all, you can kinda see how the big, bigger, f@cking biggest! mantra took hold of this Jerry Bruckheimer produced miasma and gave us a story where the biggest surprise is a cameo appearance by a member of the Rolling Stones. 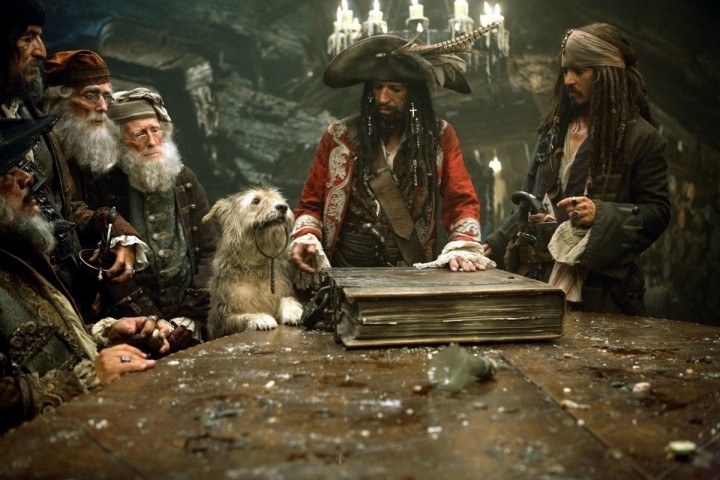 At the end of Dead Man’s Chest, Jack Sparrow (Johnny Depp) is dead, swallowed by the Kraken and now existing in some alternate plane where he has visions of himself and his ship is carried by millions of stone crabs. Davy Jones (Bill Nighy) is under the control of Lord Beckett (Tom Hollander), and is hunting down pirates to be killed with the hangman’s noose. Captain Barbossa (Geoffrey Rush) leads a team including Will Turner (Orlando Bloom), Elizabeth Swann (Keira Knightley) and Tia Dalma (Naomie Harris) to Singapore to rescue Jack from Davy Jones’ locker, by way of stealing a map to the location from Pirate lord Sao Feng (Chow Yun-fat). Ambushed by Beckett’s men, the pirates all decide to rendezvous at Shipwreck Cove, where the Brethren Court (a gathering of the nine pirate lords) will determine the future of the pirate way of life. Will, meanwhile, strikes a bargain with Jack that will ensure he can rescue his father, Bootstrap (Stellan Skarsgard) from Davy Jones’ ship, the Flying Dutchman, only to find that both Jack and Lord Beckett have other ideas. 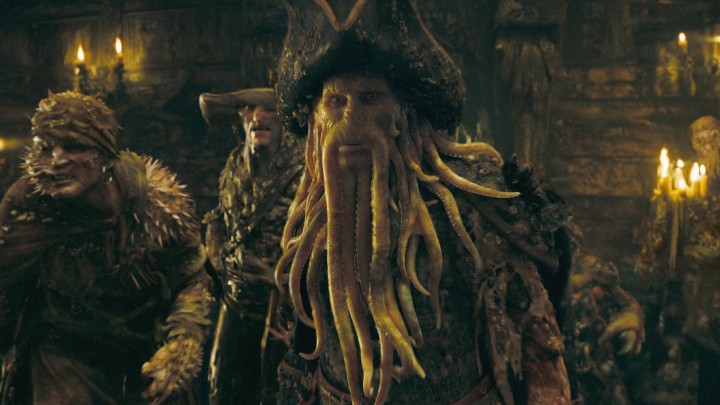 If Dead Man’s Chest had a veritable embarrassment of riches at its disposal, then At World’s End has more, and even less idea what to do with them. Throwing all manner of convoluted pirate-themed ideas at the screen, Ted Elliot and Terry Rossio’s screenplay is extravagant, excessive, and ultimately a disaster. The problem with these Pirate movies is that there’s just too many people taking up too much time with too little dramatic development; the original managed to capture that balance perfectly, which is why it remains as good as it is, but both Dead Man’s Chest and At World’s End suffer from an unfocused narrative on too many characters. In fact, the film pushes many of the franchise’s best characters aside for large sections of the film (Jack Sparrow goes missing for almost the entire first third of the movie!) to spend time with characters who have almost zero audience connection, and to whom too much is forcibly invested. The key trio of Sparrow, Will and Elizabeth has made way for even the likes of second and third stringer characters to almost become major players – Lee Arenberg and Mackenzie Crook, as well as jack Davenport’s James Norrington, are all pushed aside for the likes of Naomie Harris’ Tia Dalma (who turns out to be the love of Davy Jones’ life, Calypso, a water nymph in Greek mythology, with similar powers to King Neptune) and Stellan Skarsgard’s Bootstrap Bill Turner to have their moment in the sun. 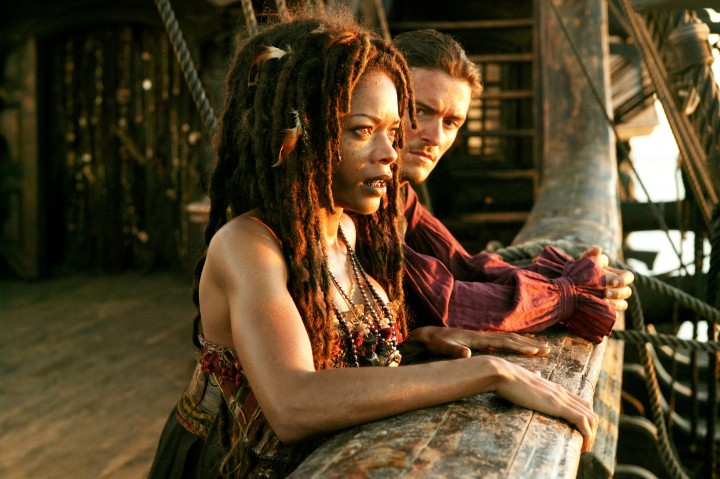 The romance angle between Will, Elizabeth and Sparrow that sparked in Dead Man’s Chest is forced to be resolved here, but it’s handled terribly, with odious dialogue and hamfisted plot twists ensuring the young pair don’t reconcile until the very end (more on this in a moment), leaving any “romance” to dwindle and die on the vine as the film’s headache-inducing final act kicks in. A laughable “marriage” between Will and Elizabeth between the clash of swords and the faceless fury of I-don’t-know-who’s-fighting-who battle fatigue merely brings into sharp relief the fact that, by the end of this thing, nobody had any clue how to end it. So it just. keeps. going. And the concluding act of Will’s sacrifice for Elizabeth, cursed to spend an eternity aboard the Flying Dutchman as a replacement captain for Davy Jones (who re-joins his love, Calypso, at the bottom of the ocean!), is just insipid, an uninspired and useless tragic act designed to make women swoon as the lovers are torn asunder only moments after consummating their “wedding”. Neither Bloom, who goes for “rugged” and comes across as “emo”, and Knightley, who might as well have been swapped out for a plank of wood for all she brings to the movie, can offer much beyond simplistic, confused, stare-and-goggle archetypes, and that’s damned annoying. 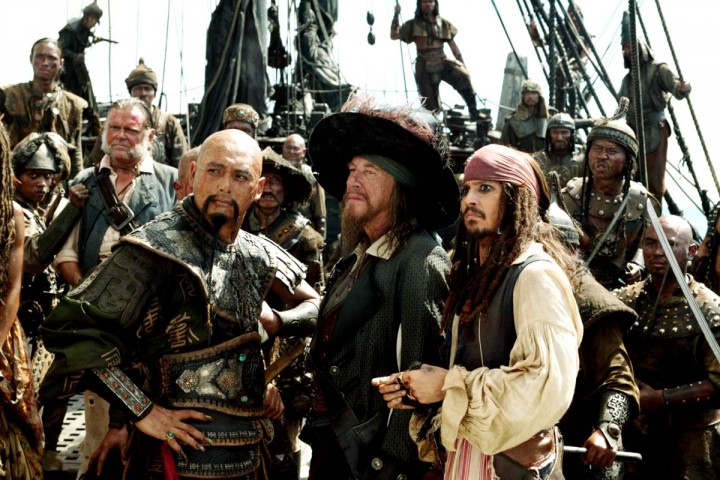 The story arc of Davy Jones and Calypso is especially egregious, given way more screen time than it needed, and resolved with such cavalier brevity it’s insulting to those who sat through two films to get there. Bill Nighy’s Jones is probably one of the best characters in the entire franchise aside from Jack Sparrow, and the film obviously wanted to make sure he gets as much time to do his thing as a story will allow, but a late-act pit-stop moment between Nighy and Harris, as they lament the years they’ve spent apart after some kind of betrayal (I admit, I’d lost interest by then and don’t really remember what it was all about) drags the film to almost a complete halt. Chow Yun-fat must have watched this film in utter amazement at how badly he does in the role of Sao Feng, a Chinese pirate skulking about in the underbelly of Singapore and who would appear to be utterly full of himself; he spends half an hour berating his fellow pirates before joining up with them. Ugh. 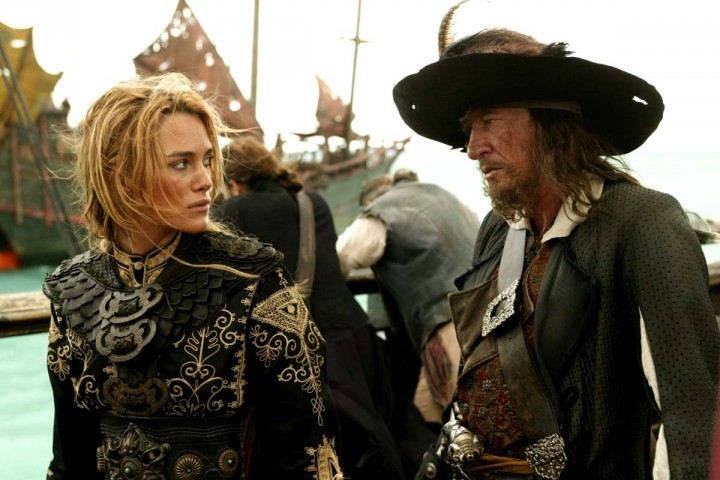 Then there’s Jack Sparrow, the film’s most important (beloved?) character. Unfortunately, he’s given almost nothing to do throughout this film other than to look startled, surprised, baffled, confused, or a mixture of all four. Depp’s a better actor than this trash deserves, and his character is unfortunately cast aside in favour of developing lesser roles for no reason other than to make that “kitchen sink” final act feel so bloated. The roster of characters the film pays service to is huge, and Depp, even with his hilariously wicked sense of humour, is reduced to near-parody of himself as a minimal impact player in the grand scheme. Sparrow spends about twenty minutes stuck on some salt lake (which doubles for Davy Jones’ Locker, apparently), wandering about his beloved Black Pearl talking to literally himself. Exactly why this sequence needed to go for so long, I’m not sure, and if they’d removed it completely and had Jack just arrive over the horizon, it would have worked a lot better. And what the hell was with that ongoing peanut gag, I’m not sure. Peanuts? That’s how much you think of the audience? 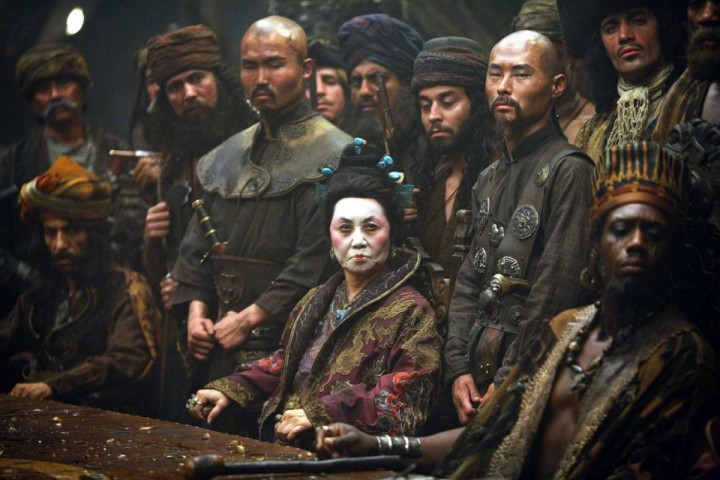 At World’s End boasts some impressive visuals, in spite of its haggard story development. The ship-to-ship battles are enormous, and the locations, production design, CG rendering and sound work are superb, in every way. But it’s too much! Hans Zimmer’s tumultuous score, a sonic assault of orchestral brutality, becomes almost its own character in the film. The film’s final act, which sees the Pearl and the Dutchman battling it out inside an enormous maelstrom at sea (a giant whirlpool), feels like the Pirates franchise swiped some ideas from the Fast & The Furious guys, saying “f@ck logic, let’s just make it as crazy as we can.” The excess with which director Gore Verbinski pulls out all the stops to overwhelm the audience with sheer “look what we did with all this money we spent” moments is staggering, a travesty of incoherence and bloated egomania, as characters (and us) are tossed about on the high seas for what feels like an eternity. Clocking it at nearly three hours, At World’s End often feels like it’s too long, and that’s bad. 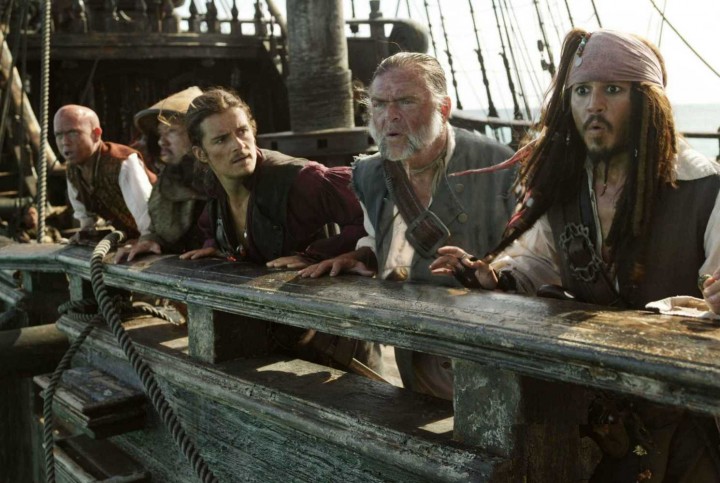 After an interminable stop-start relationship with the viewer, At World’s End is all sound and fury, and very little convincing payoff. The gamut of characters prevents the film’s focus from fully taking hold, and as far as “grand adventure” goes, you’re better off with Cutthroat Island than this mess. The very essence of hubris leeches from almost every frame, as staggering set design and troughs of money appear to have been thrown at the screen to try and entertain. Instead of a film blasting audiences into the back row of the cinema, perhaps if they’d spent more time giving us fewer “main” characters (it seemed like everyone was a main character here) and a story we could actually follow (I admit, I was scratching my head at times, wondering what the hell was happening), At World’s End might have been a better film. Yeah, it made gonzo box-office, but as a critical work of blockbusting art, it’s like a monkey throwing shit at a canvas and hanging it in the Louvre.