Director :  Gore Verbinski
Year Of Release :
Principal Cast :  Johnny Depp, Orlando Bloom, Keira Knightley, Bill Nighy, Stellan Skarsgard, Tom Hollander, Kevin NcNally, Jack Davenport, Jonathan Pryce, Lee Arenberg, Mackenzie Crook, Naomie Harris, David Baille, Martin Klebba, David Schofield, Geoffrey Rush.
Approx Running Time :  145 Minutes
Synopsis:   Jack Sparrow races to recover the heart of Davy Jones to avoid enslaving his soul to Jones’ service, as other friends and foes seek the heart for their own agenda as well.
What we think :  There’s almost too much story here, too many characters trying to do too much, and the film’s bloated mid-section almost brings things undone. In spite of this, however, I still find this one the most enjoyable of the Pirates sequels. While not a patch on the original, Dead Man’s Chest is filled with stunning production design and some nice comedic moments intertwined with the drama.

Down to Davey Jones’ locker….

I guess it was inevitable. After the massive success of the first Pirates Of The Caribbean movie, The Curse Of the Black Pearl, it would follow that Disney would seek to further option their franchise potential with a sequel – hell, not one, but two, filmed back-to-back (after all, it worked for Lord of The Rings, right?) and released a year apart. Almost the entire original cast reprise their roles, with a few new additions to the mix; namely, Bill Nighy as the dweller of the depths, Davy Jones, and Tom Hollander as a dastardly East India Trading Company lackey who seeks a fabled treasure all to himself. The folly of mounting a 2-film production in such a way meant that if the first sequel bombed (unlikely, but possible, said the Wachowski Brothers…ahem) then the second sequel (in this case, At World’s End) might be a disaster from which resurrection would be impossible. Now, I get the general distaste for Dead Man’s Chest; it’s a bloated, messy, poorly structured venture into the same twisting narrative that made Black Pearl so charming, and if you’ve not seen the original film then this one will make no sense whatsoever. But I still enjoy it. 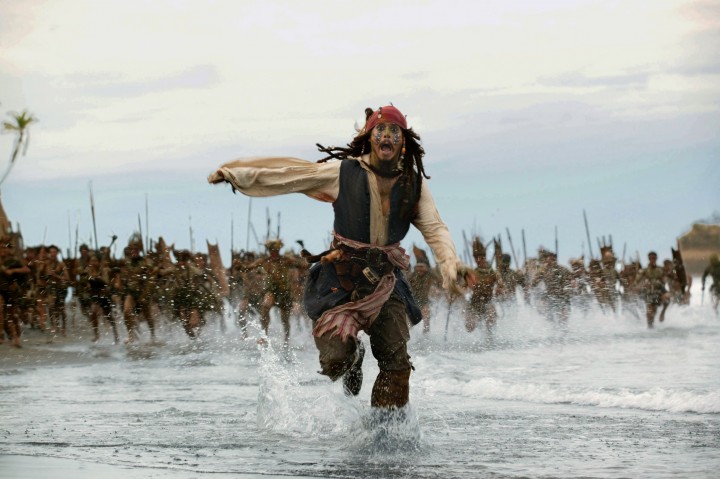 Re-watching this film recently, I found myself startled at just how filled with ideas Dead Man’s Chest is. It runs some 140 minutes, and at times really feels like it, but at no point could you ever consider this film “boring”. In many cases, confusing is probably more on-point, but I still find this film to be a largely energetic romp even when many will roll their eyes and sigh, wistfully. That’s not to say there aren’t problems with the film – because there are huge problems to be found – but on a sheer enjoyment level, I just think its garish, hubris-laden pleasures outweigh its faults.

The key problem with Dead Man’s Chest is its apparent desire to give everyone on the screen some kind of arc. From Depp’s always amusing Jack Sparrow, to the lesser cameo of a pirate hanger-on, it seems Ted Elliot and Terry Russo’s screenplay has tried to outdo the previous film, and while it succeeds in giving us more story, more often, the end result becomes a white-noise garble of disposable plotting and character arcs that offer naught but silly plot twists. In fact, whereas the original film’s labyrinthine plot felt organic to the characters and premise, Dead Man’s Chest feels forced, as if the desire to spend all that Hollywood money needed some extra scenes where effects and action set-pieces could be cobbled together to add to the running time.

It’s not that the characters are unlikeable, it’s that they’re asked to take on story-lines that don’t really work all that well. Orlando Bloom and Keira Knightley are the most egregiously served by a retrofitting of their back-stories, with Bloom’s character meeting his long-lost father (an under-served Stellan Skarsgard, who does to this film what Sylvester McCoy’s Radagast does to the Hobbit movies) and having to make the choice between cursed family and his soon-to-be-executed fiancée, Elizabeth. Knightley’s role in the film lurches from clutching lady-like innocence to boys-own grubbity grub with no wit or tact. Her character, Elizabeth, has some decidedly WTF moments with Jack Sparrow, a kinda unrequited love subplot, that doesn’t feel like it needed to be shown rather than implied, and Verbinski’s handling of this facet of the story constantly grinds things to a halt. I know, adding some manner of angst to the Elizabeth/Will relationship is good for the story, but given how reduced in prominence it is with everything else going on, perhaps they should have just avoided it altogether.

The presence of Tom Hollander, as a truly vile East India Trading Company shill, is the film’s real bright spot – he’s a human villain in a film filled with mythological presence, and Dead Man’s Chest comes alive whenever he’s on the screen. Although his motivations and endgame wouldn’t play out until At World’s End, here he delivers a boo-hiss-at-the-screen performance that contrasts nicely with Depp’s drunkard pirate. And the film sorely needed a replacement for the missing Barbossa (who does cameo at the end, in a nice cliffhanger for the next film); that role is primarily taken by Bill Nighy’s CG enhanced Davy Jones, a tentacled creature from the depths who has torn out his heart and placed it in a lost chest (hence the title of the film) so that he won’t feel any emotions. Jones is a magnificent piece of production design and CG effects work; as a character, he’s the standout visual motif of Dead Man’s Chest, although too often he’s surrounded by a clamour of crewmen from his ship, the Flying Dutchman. The crew of the Dutchman represent a similar vein of story to the Black Pearl’s cursed crew, with the Dutchman’s crew all carbuncled ex-sailors now lured into spending 100 years on board the fated ship terrorizing the seas. It’s here Will meets his father, and it’s through this side of the story that Dead Man’s Chest comes unstuck in a big way. 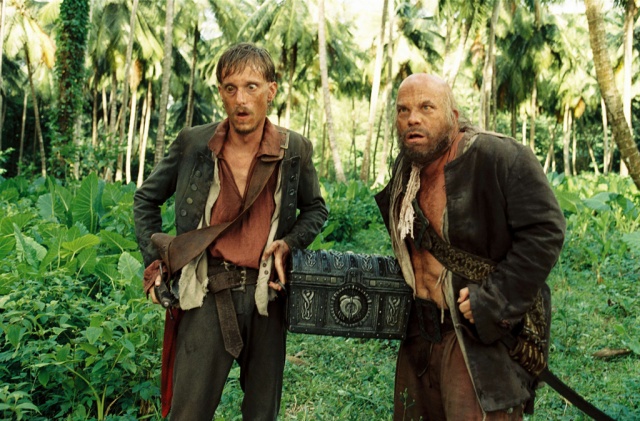 See, with Depp, Bloom, Knightley, Hollander and a returning Jack Davenport all vying for screen time with their own stories, now we have an entirely new set of character to whom we’re supposed to enjoy, and with the exception of Nighy’s Davy Jones, the rest of this ragtag team of production design overkill have a lot of screen time to achieve almost nothing by way of audience appreciation. As I said earlier, there’s just too much happening here for it all to work like it should. Too many characters, too much betrayal and double-cross, too much intrigue and plot twists to make much sense of anything. Nobody’s who they seem, everyone’s out for themselves, and nobody is inherently “good”. Even Knightley and Bloom, as the white-as-snow innocence of The Curse Of The Black Pearl, become charlatans and hoodwinkers here, plummeting to the same level as Jack and his crew as they skip about the high seas in pursuit of… well, I’m still not exactly sure. 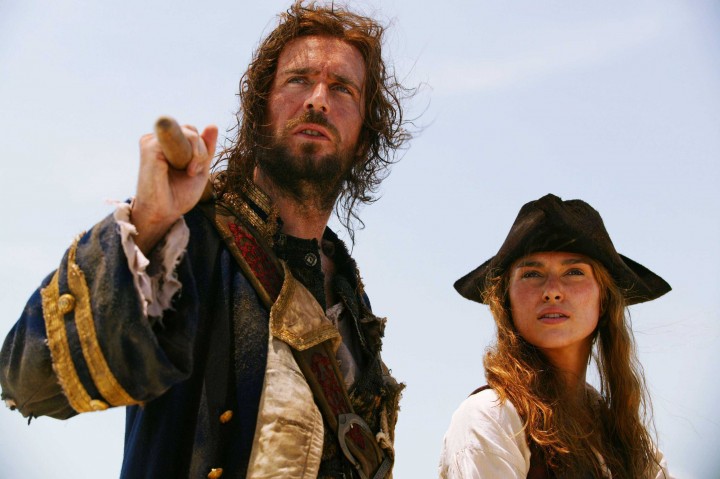 If nothing else, Dead Man’s Chest positively glows with Hollywood money. This film look astonishing, a grand scale adventure with a “do it for real” lack of excessive CG. Okay, there’s still plenty of CG, and most of it comes with the Dutchman’s crew and Davy Jones, but everything else is done “for real” as much as possible. And like Curse Of The Black Pearl, it makes the film feel grounded in realism, or as much as can be expected from a film where a kraken makes an appearance. Indeed, the kraken’s arrival in this film heralds the most jaw-dropping of all the action sequences, as a tentacled leviathan beneath the waves makes life miserable for many a hapless seafarer. Considering that Clash of The Titans would go on to outdo Dead Man’s Chest for kraken representation, today it looks a little underwhelming in comparison, but the moment the kraken rises up to swallow Jack Sparrow at the end of this film, is still mega-cool and uber-gross. Yeah, Dead Man’s Chest at least offers plenty of visual spectacle and eye candy, even when the story bogs down with malaise.

In spite of its gaping flaws and huge pacing problems (the entirety of Will’s time on the decks of the Flying Dutchman, with his father, and with Davy Jones, is forgettable work that does little other than stretch out the running time), there’s loads to enjoy in Dead Man’s Chest. The extended three-way sword-fight between Jack, Will and ex-Commodore Norrington is hilarious, as it traverses an old church, a water-wheel, and the beach, and the comedic timing of Lee Arenberg and Mackenzie Crook’s pirate ne’er-do-wells remains a highlight. Oh, and watching Johnny Depp look utterly lost with this story, as Jack Sparrow’s personality changes as often as he mentions rum. And that’s a lot. While it’s nowhere near the quality of the original film, in my opinion it’s still the best of the sequels and a worthwhile film to recapture the spirit (if not the pizazz) of its ancestor.