Director :   Chris Miller
Year Of Release :  2011
Principal Cast :  Voices of Antonio Banderas, Salma Hayek, Zach Galafianakis, Billy Bob Thornton, Amy Sedaris.
Approx Running Time :  90 Minutes
Synopsis:  Puss teams up with Kitty Softpaws and Humpty Dumpty to locate some magic beans – beans which will grow an almighty beanstalk via which they can steal the good that laid golden eggs from a magical cloud castle in the sky. Don’t you read your fairytales?
What we think :  The coolest character in Shrek gets his own film, and it’s everything I expected. Banderas provides the tounge-in-cheek cool of Puss, Hayek oozes sex appeal as Kitty, and Galafianakis does well as Humpty; wrapped up in the slick Hollywood production values we’ve come to expect from Dreamworks. While the film isn’t entirely flawless, it’s certainly a far cry from Shrek The Third or Forever After – Puss in Boots is great.

If there was ever any doubt as to who would get their own spin-off film from the now deceased Shrek franchise, it was a slim doubt indeed. Donkey was too annoying for a full feature film on his own, while the secondary Shrek characters, such as Ginge, the Three Little Pigs, Pinocchio et al were all one-note creations designed as background fodder for the main story. Puss, however, was about the only character who could have held a film on his own, and finally, he does. While the film must – by contrivance of the character – exist within the reality established by the Shrek universe, there is no other hint of characters or nods to the previous films in this franchise. If you go into this film as a newcomer, never having seen a Shrek film, you might struggle to balance the mythical fantasy of talking cats, walking eggs, and crazy magic, but long-time fans of Shrek will be able to dive right in without a problem. I guess the question still needs to be answered, though: is Puss In Boots a good, great, or merely average film?

Dolce & Gabana got nothin’ on me!

Puss (Antonio Banderas) has been searching his entire life for the legendary Magic Beans, which are said to lead to the location of a magic castle in the clouds where lives a goose that lays golden eggs. During a Spanish fire festival, Puss tries to steal the three magical beans from the evil Jack and Jill, (voiced by Billy Bob Thornton and Amy Sedaris respectively), but his heist is interrupted by the arrival of a fellow cat-burglar – Kitty Softpaws (Salma Hayek), who seeks the beans for her own purposes. After a brief escape and pursuit, Puss runs into his estranged friend Humpty Alexander Dumpty (Zach Galafianakis), an egg for whom Puss holds a large grudge. The trio team up to steal the beans, in order to grow the beanstalk and obtain the Golden Egg-laying goose – with Jack and Jill hot on their trail, and vengeance in their hearts. 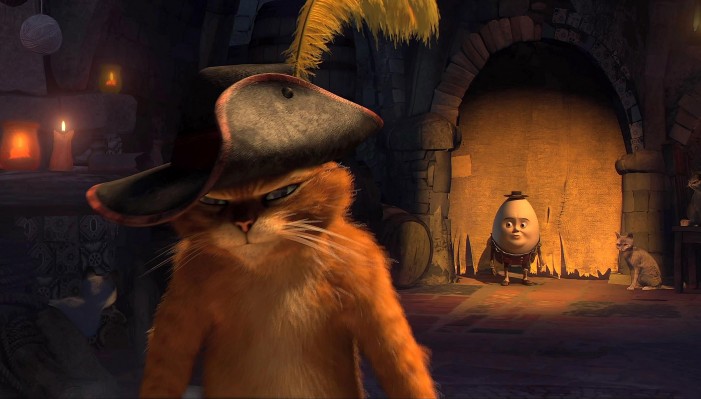 Ever since that awesome moment when Puss turned to Princess Fiona’s query as to whether he was, in fact, Shrek, and gave the response “No, but for you, I could be,” I’ve believed Puss In Boots to be ripe for his own film. In one of the Shrek franchise’s more astute moments of casting, Antonio Banderas brought his Mexican charm to the voice of the tiny boot-wearing feline, and the character became something of a cult icon to himself. Since the Shrek saga closed with Forever After some years back, after lackluster reviews and performance, I always felt that the world set up by the great green ogre’s adventures was ripe to be mined some more, even if the story didn’t revolve around Shrek himself. Puss In Boots, which is set many years before Puss ever meets Shrek, is the first film to spin out of that franchise and take things in a completely new direction. Yes, the fairy-story framework is still here, but somehow the filmmakers skirted having to be slavish to the origin stories of their characters (Humpty and Puss being the only two genuine fairy-story characters in the film, at least two only two who talk) and given each iconic motif a new voice, like a breath of fresh air. 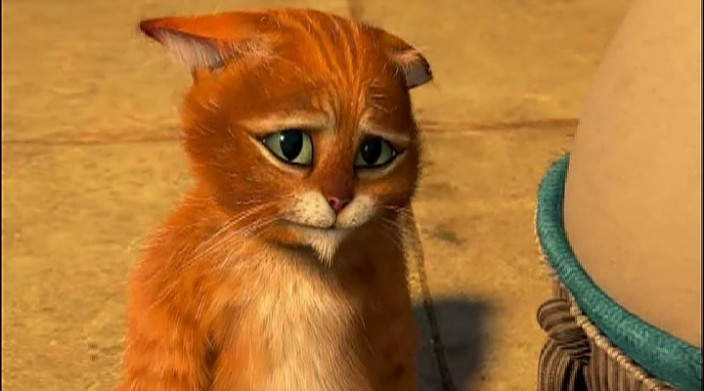 The story is fairly complicated for a kids film, I will admit. Puss’s backstory with Humpty, where they were both orphans dumped on the doorstep of a willing mother and grow up to be blood-brothers, is great to watch, because not only does it provide an emotional hook for eventual villain Humpty, but deepens’ Puss’s character from the Good Guy to the solo petty thief he comes to be in the end. The addition of Jack & Jill, a duo of horrendously ugly and incredibly sadistic humanoid characters, provide some much needed tension with the films’ more manic pursuit sequences, although neither character exists to be more than a simple plot device. Humpty Dumpty, voiced by Zach Galafianakis, is the central plot motivator of the film, ultimately a villain much like The Incredibles’ Syndrome, in that his narrative trajectory is defined by sadness, (perceived) betrayal and imprisonment. Humpty is a tragic villain, although I didn’t find the emotional balance with his relationship with Puss as fulfilling as I’d have liked. Kitty Softpaws, voiced by the equally sultry Salma Hayek, is this films’ equivalent of a Bond Girl – she adds little to the film other than a potential romantic interest for Puss, and although her quirks and traits endear her to us in the short term, she’s not as memorable a character as either Puss or Humpty. Wisely, however, the filmmakers push the Humpty angle more, and the film is the better for it.

I mentioned in the summary that the film isn’t without its flaws. Where I think this films biggest issue lies is in its haphazard sense of humor. Now, I know what you’re saying: surely a film that’s funny doesn’t have an issue with its humor, right? That’s true in the majority of cases, but with Puss In Boots I thought the humor was a little…. out of context, and a little off-kilter. Sure, the script rips into the funny without stopping for breath a lot of the time, and a lot of the humor is derived from visual cues more than anything the characters actually say, but there was just something eerie about the way this film went about it. I lack the proper vocabulary to adequately describe what I felt watching this – and please don’t take my apprehension for the humor style to misrepresent my absolute enjoyment of the film as a whole – but the closest I can come to explaining what I mean is to draw parallel with a Muppet movie, where the humor style changes from scene to scene, moment to moment. One minute it’s about the slapstick, the next it’s a piece of witty dialogue, and the next it’s all serious with explosions… there just didn’t seem to be a linear logic to the films humor, and I think that’s where I had my biggest issue. Not that it’s that big an issue anyway, but I figured it was worth mentioning.

Next time you suggest going off road, remind me not to listen to you!

Where the film succeeds, however, is in its rapid-clip pacing and its dazzling visuals. Set in some ubiquitous Spanish region (I guess), the film’s large sweeping vistas and Looney Toons-evoking set-pieces make for gorgeous animation. The special effects and brilliant detail in the animation ensure this film will keep you blinking in amazement. One shot, as an example, that floored me with just how meticulous the attention to detail was, involves a close-up of Puss’s boots walking along some cobblestones. The detail in those boots, the scuffing and wear-n-tear, is near on to perfectly rendered, and simply one more example of just how far this style of film-making has come since Toy Story.

That awkward moment when they bring out the Gimp.

Don’t get me wrong – Puss In Boots is an awesome animated film, and streets ahead of those final two Shrek films. Sure, it’s problematic in parts, and I’ve no doubt the film will be buried beneath the ever increasing animated output from Hollywood; it’s a film that truly does deserve your time to watch. It’s funny, it’s exciting, it’s cleverly written, and had the filmmakers ensured those three facets worked together instead of existing as separate entities, this would have been a classic.

What Others Are Saying About Puss In Boots:

Dan The Man thought it could have been shorter: “Another thing that kind of kept this film away from being taken to the next level was that it is essentially a 70-minute film stretched into a 90-minute film, which to some may not seem like a total problem but it does drag on just a tad too long for my own liking.”

Darren over at The Movie Blog thought it was good: “While I laud the movie’s decision to stay away from popular culture, I will concede that it does make quite a few jokes at the expense of its leading man. Most of these are allusions to Antonio Bandares’ past roles, but they never feel too intrusive.”

Stevee Taylor over at Cinematic Paradox snagged this gem from Puss Himself: “Well, I am animated, and kids like animation. I come from Shrek, and kids like Shrek. Why do you not think I am ‘suitable’ for the kids? Is it because I like to spend my time with the lovely looking female felines?”

Teri at FrontRoom Cinema had this to say: “All in all though, Puss In Boots is a fair contender for the best family Christmas release – witty, well-written, visually sumptuous, imaginative and never a dull moment.”

Nostra at My Filmviews thought it was okay, but not awesome: “So basically a very enjoyable movie, but I did have an issue with the story because of the way it ended.”

Don’t agree with what we’ve said? Think this film was a work of genius, or an absolute debacle? Let us know in the comments below!!