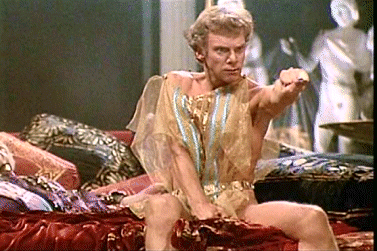 Harken back, if you will, to a brief moment in cinema history whereby a genre known as “pornography” slipped across from the dingy backrooms of sleazy screening dungeons and into the mainstream. The time of Deep Throat, perhaps the most iconic of all porn films (how on earth people fell for the misappropriation of the term “mainstream” when describing a film based solely on the concept of a woman having her clitoris in the back of her throat still staggers me!) saw a weird influence take place on Hollywood – suddenly, porn was chic. Instead of strolling down to the local cinema to catch the latest Disney animated feature, you’d ditch the kids and sneak away to catch the latest blockbuster release involving full-screen penetration and copious body fluids posing as “art”, perhaps hoping to instil in your partner a somewhat sordid level of eroticism which would lead to… well, an imitation of said film later on back home. Caligula, a film ostensibly a historical peice about a violent period on ancient Roman history, was released hanging on the combination of big-name stars and raunchy, explicit sex, most of which featured a bevy of that year’s Penthouse Pets – thanks to Penthouse founder and publisher Bob Guccione’s input. I don’t know whether to be impressed with his balls at putting out a film this convoluted, or whether to simply cringe in embarrassment to all involved.

To try describing the plot of Caligula is to try understanding what on Earth Malcolm McDowell and Helm Mirren were thinking by associating their names with this trash. McDowell, who’s star had risen high thanks to a starring role in Kubrick’s A Clockwork Orange, and Mirren, who would go on to win an Oscar playing Queen Elizabeth many years later (do you imagine the Queen ever sat down to watch Caligula?) are quality performers, as are Sir John Gielgud and Peter O’Toole, who appear in the same shots as a plethora of naked men and women all engaging in something akin to a sexual frenzy. McDowell brings his a-game to the title role of the insane Roman Emperor Caligula, giving the role his all in spite of the terrible scripting and deplorable character development. Mirren, as the uppity and aloof Caesonia – who would later become Caligula’s legitimate wife – is also up to the task, even though she’s badly filmed and terribly underwritten, and it’s easy to see how her magnetic screen presence eventually won her an Oscar in years to come. John Gielgud looks for all the world like he’s lost in a different film, like he’s wandered onto the wrong set and the completely wrong movie. I feel for the man, I really do, because his role of Nerva is a thankless one. Peter O’Toole, an actor who once played f***ing Lawrence Of Arabia, must have been hard up for cash to sign on for the role of Caligula’s uncle Tiberius.

That’s if you can all Tinto Brass’s use of camerawork and framing on this mess a “style”. According to industry legend, Brass was fired from the production of Caligula after running up huge cost overruns, leaving ring-ins Giancarlo Lui and Bob Guccione himself to add in all the explicit porn. The film is shot as if it were a stage-play, with only the most minimal inventiveness behind the camera for framing and shot selection. The long tracking/dolly shots that Brass uses, swinging his camera around the cavernous Roman sets at Italy’s Dear Studios, and his resistance to use cutaways and insert shots (he does, but only sparingly), give Caligula a languidness the film cannot overcome – to its detriment. The film lacks energy (even with all the naked flesh on display) and spark, the script feels like a a sermon of arrogance and pomposity, and the direction of the actors within the film itself seems restrained, as if Brass is afraid to really cut loose. The look of the film itself is also dull and lifeless. The sets, magnificent as they probably were, look for all the world like high school play scenery, a weird wooden vibe that reeks of backroom porn production value. The filmmakers have gone for opulence, and ended up with something approximating the term “try-hard”. With such an atrocious script, terrible filming technique and a criminal abuse of the stars at their disposal, it’s hard to imagine the producers of this mess actually being able to hold their heads up at the premiere.