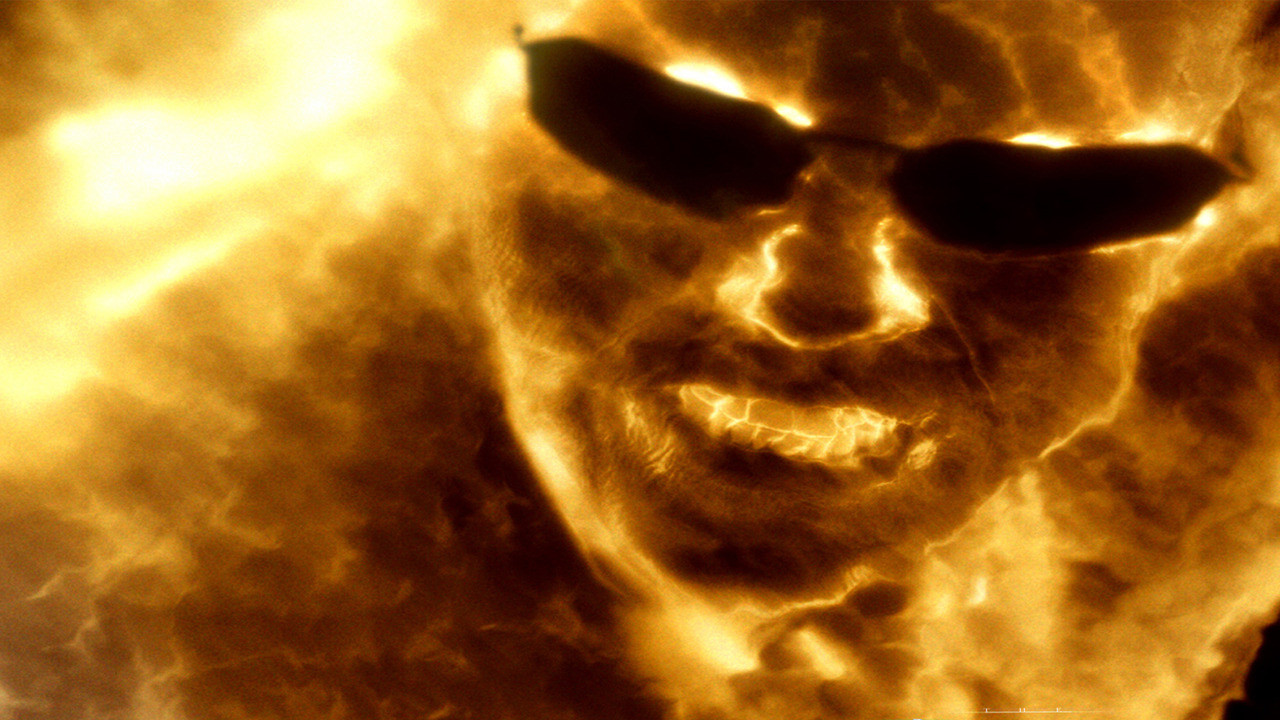 After the critical drubbing received (rightly or wrongly) by The Matrix Reloaded, cinema audiences were crossing their fingers and toes that the Wachowski Brothers could restore the Matrix trilogy to its intended glory with the third installment of the series – The Matrix Revolutions. Not only did it have to deliver the highly anticipated Machine attack on Zion, it also had to complete the story arc of Morpheus, Trinity and Neo that had been started in the original film. To say the pressure was on is an understatement, and audience expectation was high. Had the Wachowski’s blown their wad on an unnecessary and more depressing story, perhaps even killed off any love the audiences might have had for these characters from the first film? In a word: yes. I know, you don’t expect such a definitive revelation in a review so early on in the piece – after all, we’re only one paragraph in and already I’ve told you what I think of it as a film. Fanboy expectation aside, I had an inkling of concern after viewing Reloaded for the second time in the cinema a few months prior to Revolution’s release, because while I enjoyed the action and the explosions and all the pretty pictures, the heart of the film seemed to be beating in some kind of arrhythmia. With Revolutions, the expectation was not only deflated upon release, but the feeling of having a good thing sullied by a desperate and incomprehensible finale washed over audiences around the world, and the ugly truth had been revealed. The Wachowski’s couldn’t deliver the promise the original film had given us, and the finale fell flat as a tack on its green-tinged face, fists flailing and effects glimmering with effort: all of which was to no avail.

At the end of Reloaded, the sole survivor of a Machine ambush, Bane (Ian Bliss), has picked up a mysterious new personality – the malevolent Agent Smith has found a way to enter the Real World from the Matrix, and is using Bane’s body to do so. This puts Neo, Trinity and Morpheus (as well as the rest of humanity) in danger, a danger only compounded by the rapid arrival of the Machine army at the gates of Zion, phasers set to “obliterate”. In a race against time, Neo and Trinity fly off to the Machine City to strike a bargain with their enemy, while Morpheus and Co lead the resistance against the Machine invasion of Zion. And there’s plenty of blah going on too.

The Matrix Revolutions is an incomprehensible mess of a film, a film lacking anything remotely resembling fun and adventure, or even a counterbalance to the interminable dirge they decided to call a narrative. Humanity is up against an implacable enemy, impossible odds, and the only chance they have hangs on the remote chance Neo can make it to the Machine City to stop the attack – somehow. Gargantuan set-pieces, thunderous sound design and a complete lack of the charm and intellect that made the first film so brilliant, Revolutions drags the audience through hell and back, and doesn’t even have the common courtesy to finish the story in a way people can understand. I won’t give away the ending to those souls fortunate enough to never have seen this movie, but by the end, you’re sitting there going “is that it?” All that build up, and the end of the film feels like you’ve had your underwear pulled over your head by the school bully. Sore, and battered. It’s an unsatisfying completion to a story which began so well. The Wachowski’s throw everything into this film, needed or not, and end up with the cinematic equivalent of minestrone soup: bits all over the place. Unlike a good minestrone, however, Revolutions isn’t the sum of its parts – it’s a visual disaster.

Let’s cover off the good bits first, shall we? Perhaps out of everything in this debacle, the performance of Aussie actor Ian Bliss portraying a human-form Agent Smith (affecting Hugo Weaving’s mannerisms to perfection) is the sole reason you might appreciate this film. Bliss revels in taking over from Weaving as the major antagonist for a fair portion of the film, and it’s hard not to see Weaving behind Bliss’s eyes, figuratively speaking.

Okay, that’s the good, now for the bad. First, the acting. Why is it that a film about Mankind vs Machines has the humans acting more like robotic automatons than actual human beings? Neo, Trinity and Morpheus have gradually sat further and further on that stick up their collective asses, and behave less like humans and more like android replicants: there’s no glimpse of true emotion or genuine feeling virtually anywhere in the entire film. A moment in the latter third, between Neo and Trinity after they’ve flown their ship into the machine city (if you’ve seen it, you’ll know what I mean) has all the emotional weight of a turnip. Supposedly a pivotal part of Neo and Trinity’s relationship, the scene between them generates zero emotion because the entire film has none to promote it in the first place. Keanu Reeves acts like Keanu Reeves the entire time, but I expected more from Carrie-Anne Moss and, to be honest, Laurence Fishburne. Morpheus is, in this, a shadow of his former self. The rest of the cast, including Weaving (who’s more obnoxious here than ever), new “Oracle” Mary Alice (former Oracle Gloria Foster passed away mid-shoot – Alice was chosen as her replacement and the script has a subtle nod to this change), Zion commander Harry Lennix and even Nathaniel Lees as Captain Mifune all deliver performances with little emotive quality whatsoever. It’s hard to watch the humans, fighting the machines, act more like machines than the machines do! Jada Pinkett-Smith is so out of her depth in this it’s ridiculous, her character supposedly strong and independent, yet Pinkett-Smith radiates a homely charm that’s impossible to get past.

Poor Lambert Wilson, as the Merovingian, and on-screen wife Monica Bellucci, as Persephone, are given short thrift and a bunch of nonsensical dialogue to qualify as “character development”, although the only things developed here are Bellucci’s tits. Persephone and the Merovingian (now referred to in his shorthand as “Merv”) have an extended cameo in a garish, goth/punk club where Bellucci’s boobs take center stage in a dress so revealing it’s almost pornographic. Not that I minded, mind you,  but my God, they take over the entire scene when she’s on screen, and it’s little wonder the men in the audience missed that entire conversation. Collin Chou again delivers a one-note performance as the bafflingly underwritten Seraph – who he really is and why he’s even in this film is beyond me… must have something to do with the ancillary stories of this world told in Enter The Matrix. Clayton Watson, who must have thought he’d hit the big time appearing in the Matrix sequels as The Kid, a disciple of Neo and savior of Zion during the battle with the machines, gives it his all but delivers a performance bordering on epileptic. His skittish, wild eyed portrayal of the Kid is both annoying and frustrating. I’m sure with the right material and decent direction, Watson’s future in film would be bright, but he’s lost within the cacophonous oblivion of a zillion machine robots attacking Zion, and ends up as a poor man’s Bruce Willis stereotype.

Speaking of the machines attacking Zion, there’s something you don’t see every day. While the production design on the apocalyptic battle is superbly rendered, the emotion of the moment is pummeled into submission by a pounding soundtrack and a faceless, unstoppable enemy. Humans die (yawn), machines are stopped by those crazy blue zapper things (yawn after the hundredth time), and Neo once more goes into Superman mode within the Matrix to defeat Smith (an enemy he cannot defeat with punches, so why does he continue to do so?). The scale of the film dwarfs any kind of subtle, character-based nuances, and in the end you can’t do much except let it all wash over you like a wave of noise. The script is littered with faux-importance, lines which sound more like “statements” than “dialogue”, and a disastrous finale in which nothing is explained yet somehow made worse. truth be told, I knew even less at the end of this film than I did at the beginning. The monstrous Deux Ex Machina, the Machine City’s version of a PC Game Boss, is well done, but ambivalent to the entire show, with Neo’s confrontation with Smith being the central tentpole this film hangs its resolution on.

Don Davis delivers a score redolent with apropos weight: the thumping, thunderous, tumultuous score is designed not only to accompany the visual importance of the events, but to give one a headache whilst doing so. The final Neo/Smith battle, above the enormous city inside the Matrix, features a track entitled “Neodämmerung“, a nod perhaps to Wagners Ring cycle, a pounding piece of music which tries to go higher and higher with each new punch or narrative development – man, take a breath. Davis’s thematic material from the original film is gang-raped by his increased collaboration with Juno Reactor, and whereas the original score had plenty of troughs in between the waves, and Reloaded had an energetically frantic buzz working in its favor, here, the score just can’t handle the sheer epic-ness of the material. So many crescendos, not enough pianissimo to counteract it.

The Matrix Revolutions could quite easily have been entitled The Matrix Repetitious for all the sense the story made. The Wachowski’s must have had flaccid sphinctoral muscles after being given their blank cheque from Warner Bros to make the sequels, and it’s hard not to imagine anything otherwise. No doubt once they’d tightened up, they decided to throw every idea they’d ever had (even the shitty ones) into the twin films, with the majority of those ideas ending up in the third. Revolutions suffers not from a lack of ideas but from a lack of control over them. The Wachowskis went from being auteurs of sorts to being mega-watt directors virtually overnight, and they couldn’t handle it. The weight of expectation hanging on them after The Matrix was such a success would have buried a continent, and while they may have thought that by giving us a slew of characters and story points to deal with outside of those we already knew, as well as dabbling in making shit happen just for the sake of it, the sequels probably could never live up to what the audience wanted to see. That said, it’s no excuse for delivering crappy films, and let’s be honest, the sequels are regarded as pretty lame (although my thoughts on Reloaded have a caveat to that) for a reason.

The Matrix Revolutions is an epic masterpiece in excess – it’s bloated, conceited and dull. The script is nonsensical, often trite while trying to be clever, and the characters behave like the automatons they’re battling. It’s obvious that by the time they got to this stage of the scripting process, they had pretty much written themselves into a corner they couldn’t escape from, and no pseudo-religious iconography was ever going to save them. Revolutions completes the story in ever way save one – the way that matters: and while Neo, Trinity and Morpheus will forever be cult figures in their own right, audiences around the world will forever grumble at an opportunity wasted. This time, the Hollywood Law Of Diminishing Returns worked this franchise over like a two-bit hooker.