Regular commenter and fellow blogger Al K Hall, who tends the glasses over at The Bar None, was among the first people I called upon to participate in our Worst Film Week event, and like most functioning alcoholics, found time to leave it all to the last minute to contribute. Okay, I’m in jest there, but Al did send me across a little diatribe on one of Hollywood’s fallen stars, Nic Cage. I present it to you here, for Worst Film Week. For those interested in reading more from Al, and visiting the Bar None (where, I am told, each new visitor receives one complimentary shot of tequila to get them started) then you can follow the links scattered around the site, in particular in our Friends section in the sidebar to the right. I know Al would appreciate you visiting him! Take it away my man!

You know how you get drunk and sleep with Nicolas Cage? Me neither, but I have this image of Nicolas Cage waking up nude in a cold sweat, clutching his sheet tight against his trembling lips as his eyes dart frantically too and fro looking for some sign that his secret is out: he is so completely void of talent that he can’t act out, up, or even his age. Well, I’m here today to rip that sheet away and expose him. 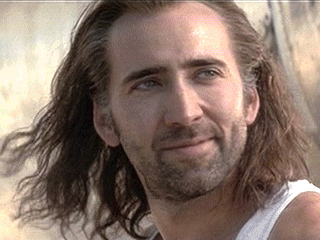 There’s a fable about a powerful emperor who hired a tailor for new robes. The tailor, however, only pretended to sew, then draped imaginary clothes over the emperor and asked what his majesty thought. Standing naked before the mirror and fearful of looking foolish, the emperor asked his court for their opinion and everyone, afraid to anger the regent, replied he looked splendid. Beerhounds and Barmaids, I’m the drunk little boy in the crowd who’s not afraid to shout out loud, “Nick Cage Is Naked!” And he can’t act, either.

So, how is it that he has been able to stagger along so far in this parade buck-ass naked? One word: Francis Ford Coppola. Ford Coppola is arguably one of the most gifted directors of the 20th century. He’s also a nepotist (which is the exact same thing as “incest” except he hires his family instead of sleeping with them). Nick Cage’s real name is Nicolas Kim Coppola and, as Francis’s nephew, a few of his earliest film appearances were in Rumblefish (still one of my all-time top 10 desert island movies), The Cotton Club and Peggy Sue Got Married. Who directed them? I’ll give you three guesses but you’ll only need one.

“But Al!” I hear you whining. “Look at all the good movies he’s made. Lord of War, Adaptation, and he won a freaking Oscar for Leaving Las Vegas! For chrissakes, Al. You call yourself a ‘Chronicle Drinker’—you of all people should appreciate the mad genius that is Leaving Las Vegas.” To which I’ll reply, “Dudes. Chill,” and then I’ll pour you another drink and as you sip it, I’ll calmly explain that Nick Cage has never made a good movie. The producers of these films produced good movies, the writers wrote and the directors directed good movies but if any of Nick Cage’s movies were any good at all, it was in spite of his participation in them.

What makes him worse than the world’s other crap actors? What sets him apart from the dislikes of Keanu Reeves and Crispin Glover is that nobody will admit now unforgivably bad Cage really is. My problem with Cage is simple. He has only one speed and that’s high strung. If he were an opera singer, we’d all be deaf; if he were a cook, we’d all be sick; if he were a surgeon we’d all be dead because he’d go into the operating theater with only a chainsaw and start hacking away indiscriminately. The man’s about as subtle as a flatulist in a prayer meeting.

To conclude, I’d like to take this opportunity as your Functional Alcoholic Slurperson to bestow on Nicholas Cage the Bar None’s first Alkie Award for Lifetime Mischievement for Bad Acting.

Thank you, and I’ll meet you back in the bar. Next round’s on me.

9 thoughts on “Nicolas Cage Is Naked”