If you asked people to name a film series that defined the “odd-couple buddy cop” subgenre, I’d wager a fair amount that the wide majority would have Lethal Weapon at the very top (if not the only choice) of the heap. A defining film franchise of a decade of Hollywood cinema, Superman director Richard Donner’s invigorating, raucous, career-making Lethal Weapon remains one of the 80’s big box-office champs (earning a whopping $120m across a meagre $15m budget) and set the bar for urban action filmmaking. Think about this: in the last few years of the 1980’s, we saw not just Lethal Weapon rise to prominence, but also Beverley Hills Cop 2 (similarly, an action comedy, and considered by many as superior to the original film), and Die Hard (an action-thriller that had a few laughs), cementing our big-screen heroes within the pop culture zeitgeist and making box-office superstars out of their respective leads. 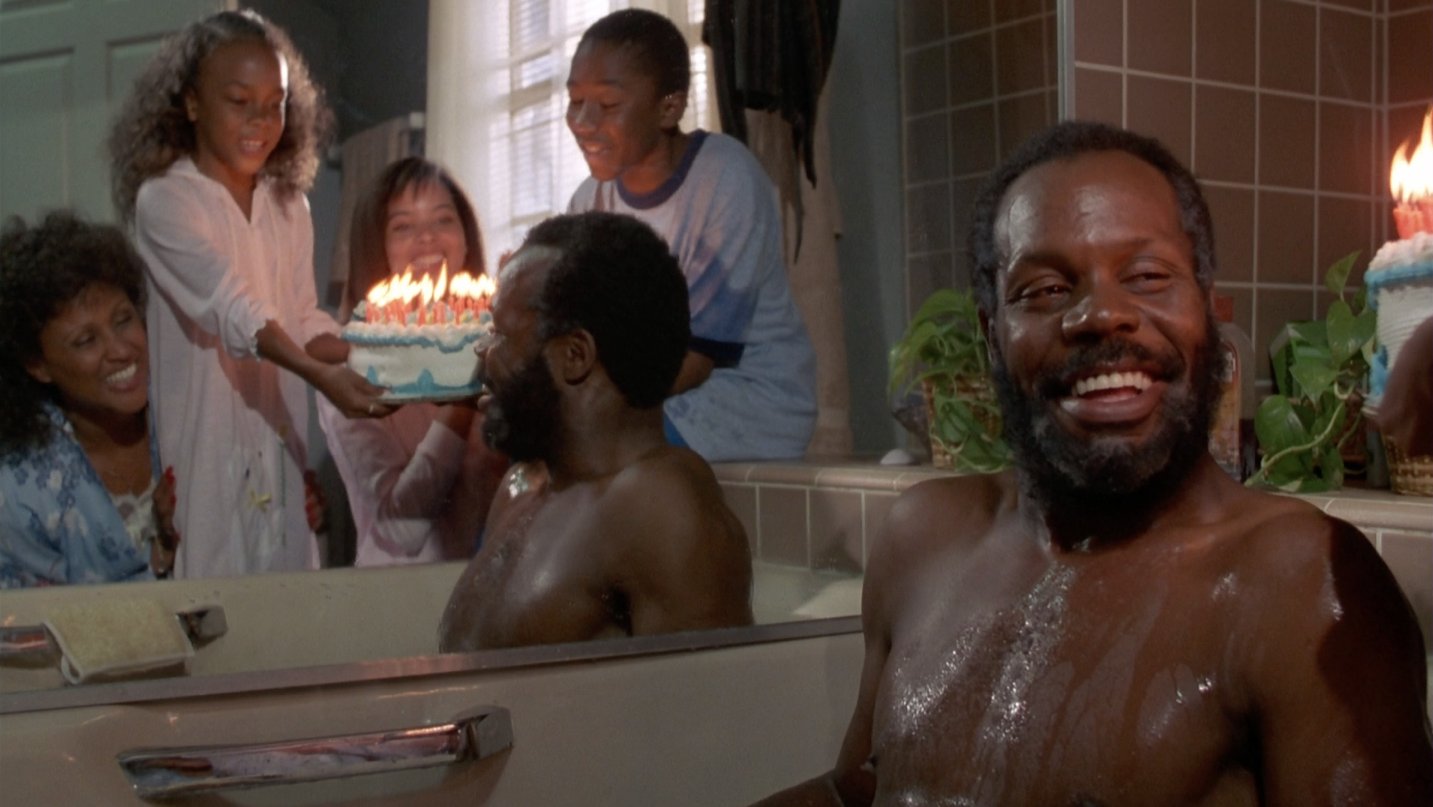 After the apparent suicide death of the daughter of a former colleague, LA Police Detective Sergeant Roger Murtaugh (Danny Glover) is celebrating both his 50th birthday and the arrival of Christmas when he’s paired up with suicidal narcotics agent Sergeant Martin Riggs (Mel Gibson), against his better judgement. Murtaugh’s by-the-book ways and penchant for avoiding outright danger are in direct contrast to Riggs’ incendiary and confrontational methodology, which also causes the LAPD’s local psychoanalyst, Dr Stephanie Woods (Mary Ellen Trainor) concern. Murtaugh and Riggs discover that the girl had also been poisoned by a startling new drug, brought into the country illegally by the cunning former Special Forces commander General Peter McAllister (Mitchell Ryan) and his cold-blooded henchman Mr Joshua (Gary Busey). So when McAllister and Joshua drag Murtaugh’s innocent daughter, Rianne (Traci Wolfe in her screen debut) into the mix to force Murtaugh’s hand, sparks and blood will surely fly. 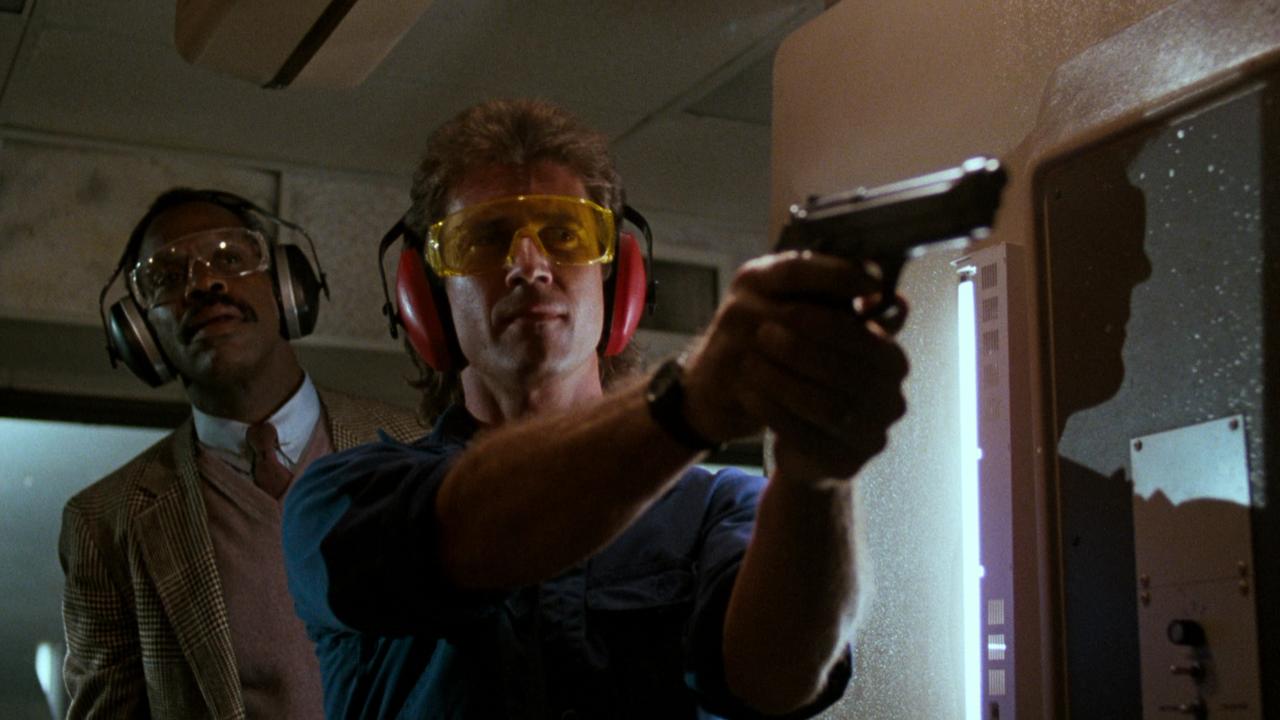 Prior to the release of Lethal Weapon in 1987, Mel Gibson had become a household name on the Australian big-screen in the three original Mad Max films, the cult classic war film Gallipoli, and alongside Anthony Hopkins in the The Bounty, a modern remake of Mutiny On The Bounty in which Gibson appeared as Fletcher Christian. While well known inside Australia, and noted as a rising talent in Hollywood, it would be Lethal Weapon that turned both Gibson and co-star Danny Glover into overnight superstars. Enormously successful, the pairing of Gibson and Glover as opposites-attract cops shoved together to stop crime turned out to redefine the police-action-comedy genre forever, spawning three sequels (the last being released 11 years later, in 1998) and boasting a ragged, rip-roaring sense of cinematic showmanship from a director better known for his horror, fantasy and comic-book film projects. Donner, whose 1978 big-screen version of Superman broke all the box-office records, and who had previously directed the supernatural horror feature The Omen, had significant failures to his name before Lethal Weapon came along. Box-office duds Inside Moves and The Toy, none of which dampened his lustre as a solidly dependable helmer of big-budget genre projects, were a blip before this: although it should be noted that when he stepped into the director’s chair for Lethal Weapon, it came with a significantly smaller budget than he was used to. Made for a reputed total of $15m (just shy of $40m by today’s money), Lethal Weapon would go on to become the ninth highest grossing film of that year. A phenomenally successful spring blockbuster, Lethal Weapon scored big largely due to the chemistry between Gibson and Glover, which even by today’s standards is electrifying to watch. Gibson in particular shoulders a lot of the wild-eyed insanity Donner has control over, playing Riggs’ as a dynamic and out-of-control dude with no restraints – in the story, Riggs’ wife was recently killed in a car accident, leaving him devastated and on the brink of suicide, meaning he quite literally has “nothing to lose”. The LAPD don’t want to lose a good officer so they pair him up with Glover’s Murtaugh and hope to point him in the right direction, which through a combination of skill and sheer dumb luck turns out to be the right path. Gibson’s memorable Three Stooges riffs pop up throughout the film (and are heavily referenced in the film’s early stages with an on-screen cue for the legendary comedy team), and Glover’s immortal age-specific catch-cry – “I’m too old for this shit” – is a refrain that earns its place among the very coolest of Hollywood’s lengthy history. 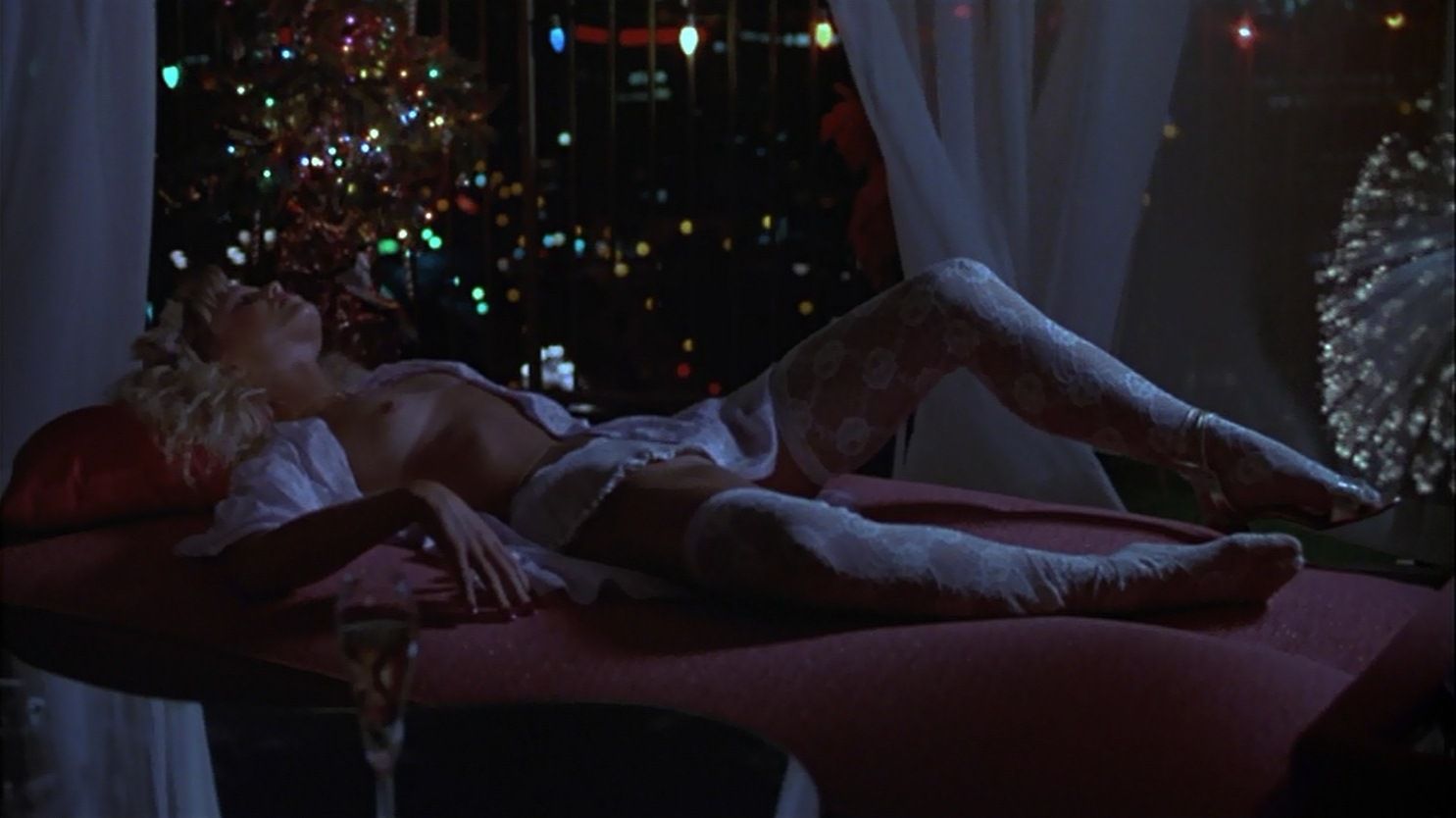 Written by the legendary Shane Black, who also assisted with John McTiernan’s Predator script in an uncredited capacity, Lethal Weapon’s scattershot approach to dialogue and characterization is evident from almost the first frame of the movie. Unsurprisingly for an 80’s film, Lethal Weapon was produced by Joel Silver, so of course it’s a pulpy, sexy, sleazy production of gratuitous violence, occasional nudity and a tone one could describe without flinching as “masculine”, with both Gibson and Glover, as well as Gary Busey in fine scenery-chewing style, attempt to out-manliness each other throughout. Black’s dialogue is rapid-fire, sarcastic and soaked in realism, despite the rather ineloquent nature of the film’s character roster – nobody here is particularly smart, just whip-smart enough to survive the mean streets of LA I guess – and there’s a distinct 80’s bravura nature to Donner’s direction of his cast that makes this nutty premise work. It helps that both Gibson and Glover commit to their respective roles with dead seriousness, finding the humour in both deadpan and sardonic performances that elicit audience chuckles in the face of some quite dark thematic subtext. Martin Riggs operates on a hair-trigger and Black goes to great pains to ensure we keenly feel his anguish, which lays a solid foundation for his off-the-chain antics throughout the remainder of the film, while Glover’s gentler, family-oriented Murtaugh remains the straight-man to his partners histrionics. This paternalistic partnership would solidify across the remaining three films and become the touchstone element of the franchise as a whole. 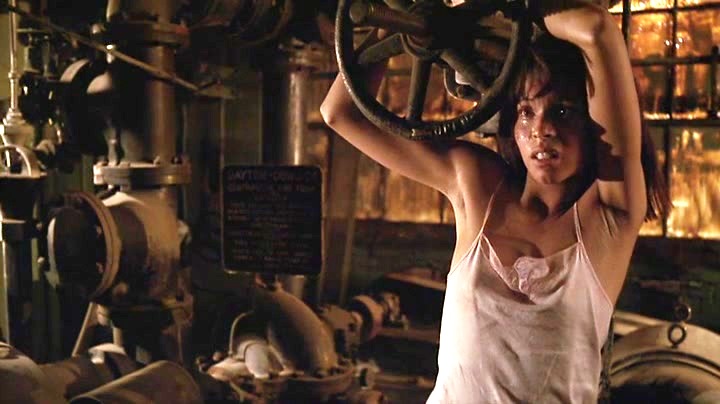 The Lethal Weapon franchise has since become synonymous with gloriously over-the-top 80’s action filmmaking. The action sequences here are big and bold and certainly deliver spectacle, at least they would if we were still living in the 1980’s. It’s been an eon since I last watched the original Weapon and I was quite surprised to find that I felt the film’s sprawling street-bound and desert-scape action sequences felt a little anaemic, propped up ably by the cast but otherwise feeling decidedly insufficient to the film’s status as a classic. The cinematography isn’t to blame: industry titan Stephen Goldblatt (Batman Forever, Striptease) makes this thing look as slick and clean as anything filmed today, with a couple of nice trick shots (zooming from a distance to something up close, for example) interspersed throughout to keep the visual side of the movie pulsating. The film’s rock-solid 80’s score also can’t be blamed, with Michael Kamen (together with Eric Clapton) providing a jazzy, saxophone-infused melodic theme that has perhaps become the default style of an entire decade for nostalgia hounds, with percussive and guitar riffs sprawling throughout this combustible premise. No, where I felt the film kinda stumbled a little was with Stuart Baird’s editing. Baird, himself a long-standing legend within editing circles, having cut almost all of Richard Donner’s films, as well as innumerable action, sci-fi and dramatic films down the years, isn’t afraid to chop and cut an action sequence to within an inch of its life; sadly, Lethal Weapon almost feels over-edited in its contortive action sequences, as if refusing to allow us a breath to take in the bone-snapping, blood-spurting brawling and bruising antics Gibson, Glover and Busey endure within. Sadly, some of the scenes are cut together with a rather uneven, discombobulating style. It’s definitely a style known within the Joel Silver, Jerry Bruckheimer and Michael Bay school of action editing, but I think the lack of fluidity or cohesion to some of the sequence editing leaves a little bit to be desired. 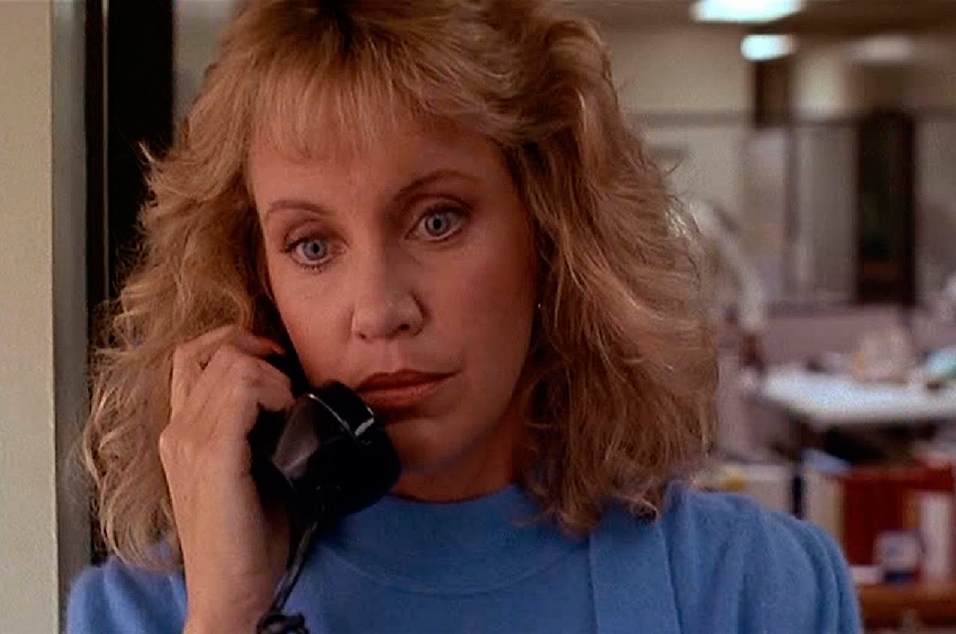 That minor issue notwithstanding, revisiting Lethal Weapon was a genuine pleasure. A cast who know their stuff, a writer who knocks it out the park, and a director at the top of his game combine to produce true Hollywood alchemy; as potent a mixture of magic and star power as you’ll see on the screen. Little wonder this Weapon would become the benchmark for the genre going forward, and (despite what you think of him now) gave us a sexy-as-hell star turn from Mel Gibson (which would launch his American career into the stratosphere). Lethal Weapon still packs a wallop.