When it comes to the subgenre of “Movie” parody movies – Scary Movie, Not Another Teen Movie, et al, Craig Mazin’s 2008 entry Superhero Movie stands as one of the more respectable. There’s still an interminable low bar to these low-budget cameo-riddled slapstick affairs, but I can honestly say that this film actually forced more than a couple of chuckles out of me, and at least two genuine belly-laughs. Not bad for a subgenre of film I figured was worn out back in the 1970’s with Airplane and Airplane 2. Typically these films have a shelf life of about three years or so, if not shorter, due to their reliance on the audience being familiar with the films these movies are taking the mickey from – parody films work well when the humour is broad enough to overcome pop-culture specificity, the problem being that these modern Naked Gun-style parody films are entirely reliant on said audience awareness. Superhero Movie, however, is a rare example of one of these silly things actually striking the right tone between self-aware and genuinely affectionate towards the material it’s sending-up, and despite leaning waaaay to heavily on Sam Raimi’s original two Spider-Man films, is just clever enough with the comic book genre milieu to stick the landing more often than not. 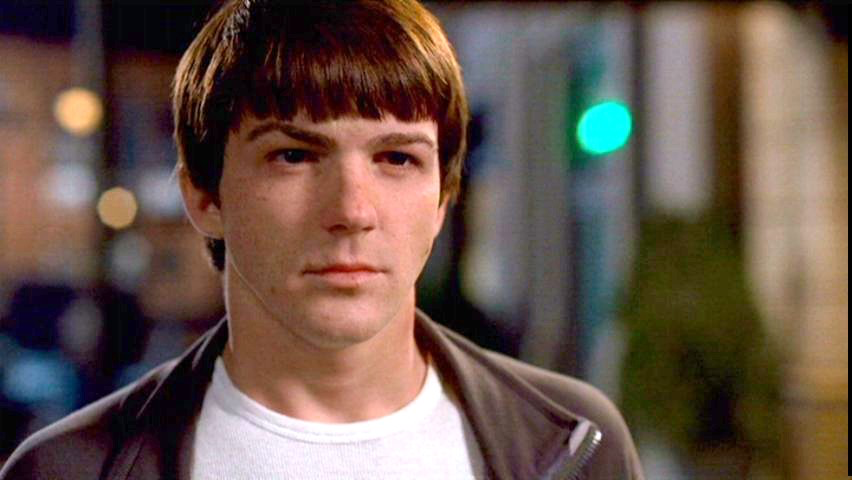 Unpopular high-school kid Rick Riker (Drake Bell) is bitten by a radioactive dragonfly whilst on a school excursion, which gives him special dragonfly like powers. He hides this ability from his Uncle Albert (Leslie Nielsen) and Aunt Lucille (Marion Ross), and his best friend Trey (wait, it’s Kevin Hart!), moonlighting as the costumed vigilante superhero Dragonfly. Meanwhile, terminally ill businessman Lou Landers (Christopher McDonald) and his science boffin associate Dr Strom (Brent Spiner) attempt to create a device that steals the life essence from random victims and allows Landers to prolong his life. Landers eventually turns himself into the villain Hourglass to steal enough souls to grant him immortality. Standing in his way is Rick and his romantic infatuation with local girl Jill Johnson (Sara Paxton), who looks extraordinarily like Reese Witherspoon and not Kirsten Dunst, especially when soaking wet. 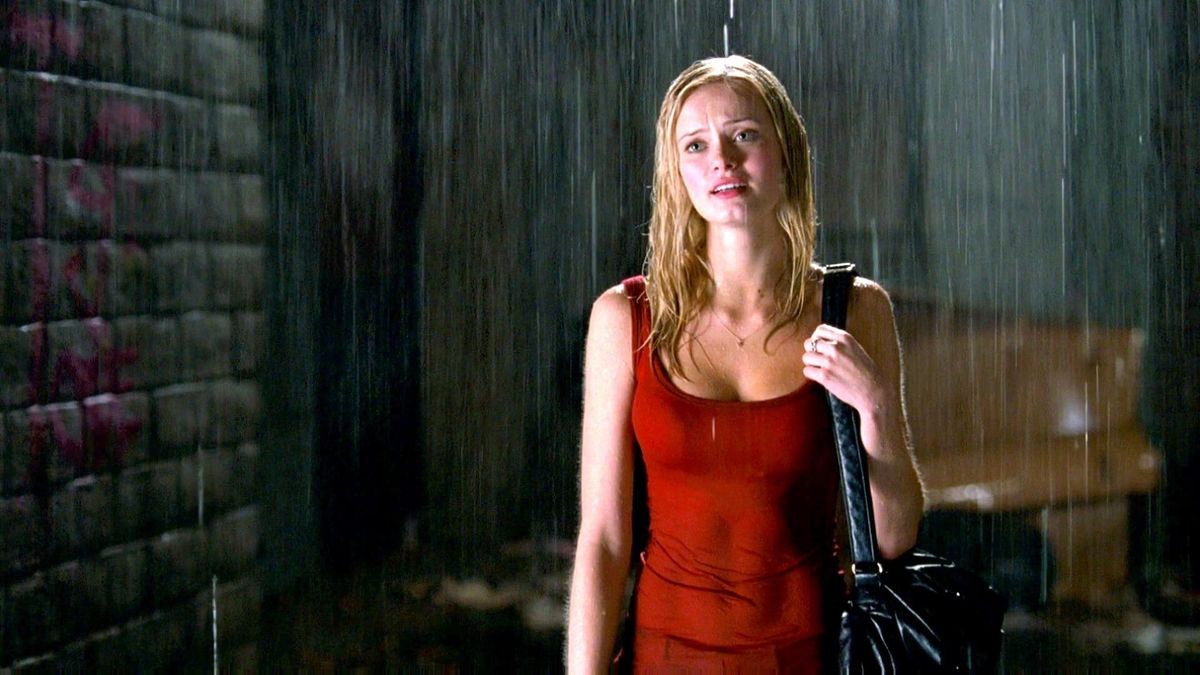 You may be sitting there reading this thinking to yourself “I think I’ve heard the name Craig Mazin before, but I can’t put my finger on where” and if so, you’d be just like me. Turns out, Mazin would more recently create and write the critically acclaimed HBO miniseries Chernobyl, a multi-Emmy-award winning show starring Jared Harris and Stellan Skarsgard. The transition from writing parody films Scary Movie 3 and 4, raunchy adult comedies like The Hangover Part II, or schtick fantasy films like The Huntsman: Winter’s War to a stellar piece of filmmaking like Chernobyl is a real head-scratcher, but you can’t deny a man his big break. Superhero Movie, one of only two films Mazin has directed (the other being 2000’s The Specials, written by James Gunn), never once indicates the kind of serious filmmaker Mazin would become, what with its teeny-bopper sense of humour, lurid suggestiveness and po-faced sarcastic takes on the semi-serious nature of comic book movies. 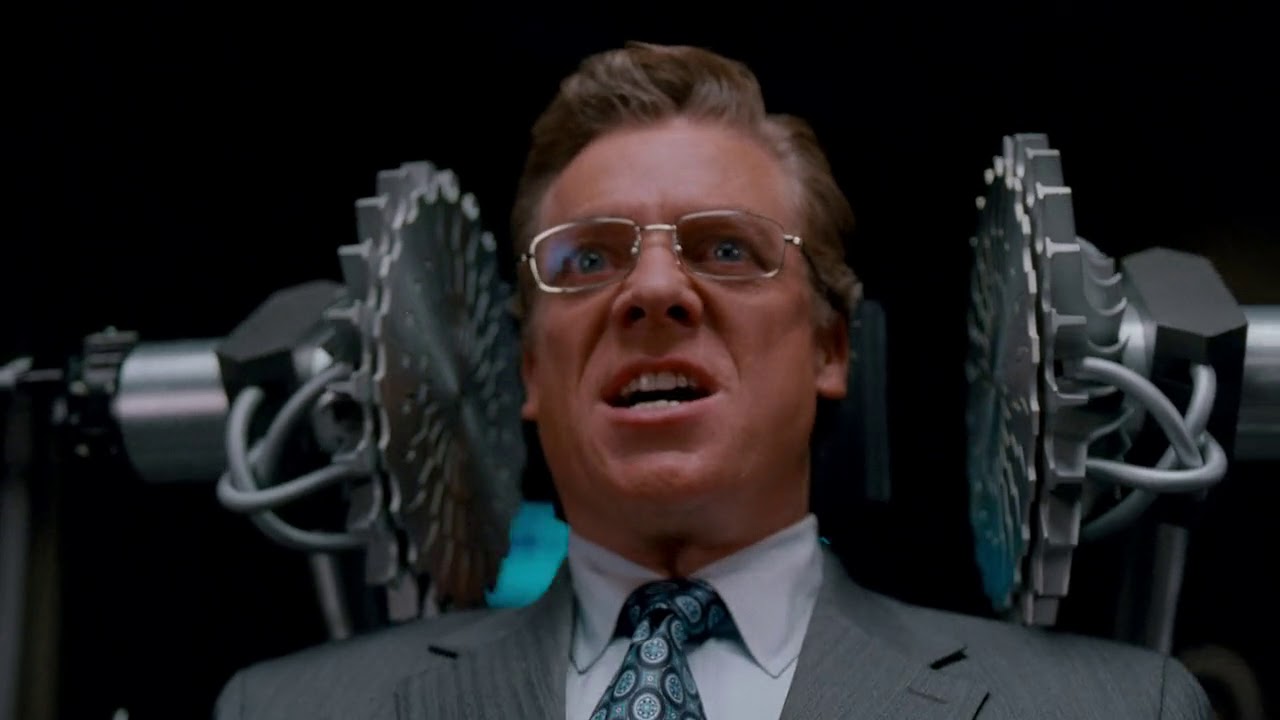 Spoofed inside this loose Spider-Man riff is homages to Marvel’s X-Men franchise, the Fantastic Four, and a plethora of ancillary creations fans will have fun spotting in the plentiful crowd sequences. In keeping with the subgenre, the film is littered with cameo appearances from stars big and small – Tracy Morgan makes for a hilarious black Professor Charles Xavier, Pamela Anderson as the equally hilarious Invisible Woman, and Craig Bierko appears in an end-credit outtake as everyone’s favourite Adamantium-clawed Canadian mutant, Wolverine. There’s a load more too – the voice of Homer Simpson, Dan Castellaneta, Regina Hall, Keith David, Lil’ Kim and Jeffery Tambor pop in every so often, offering pitch-perfect spit-takes on well known characters and a variety of all-too-close approximations of the then Sam Raimi-led Spider-Man films popular characters. 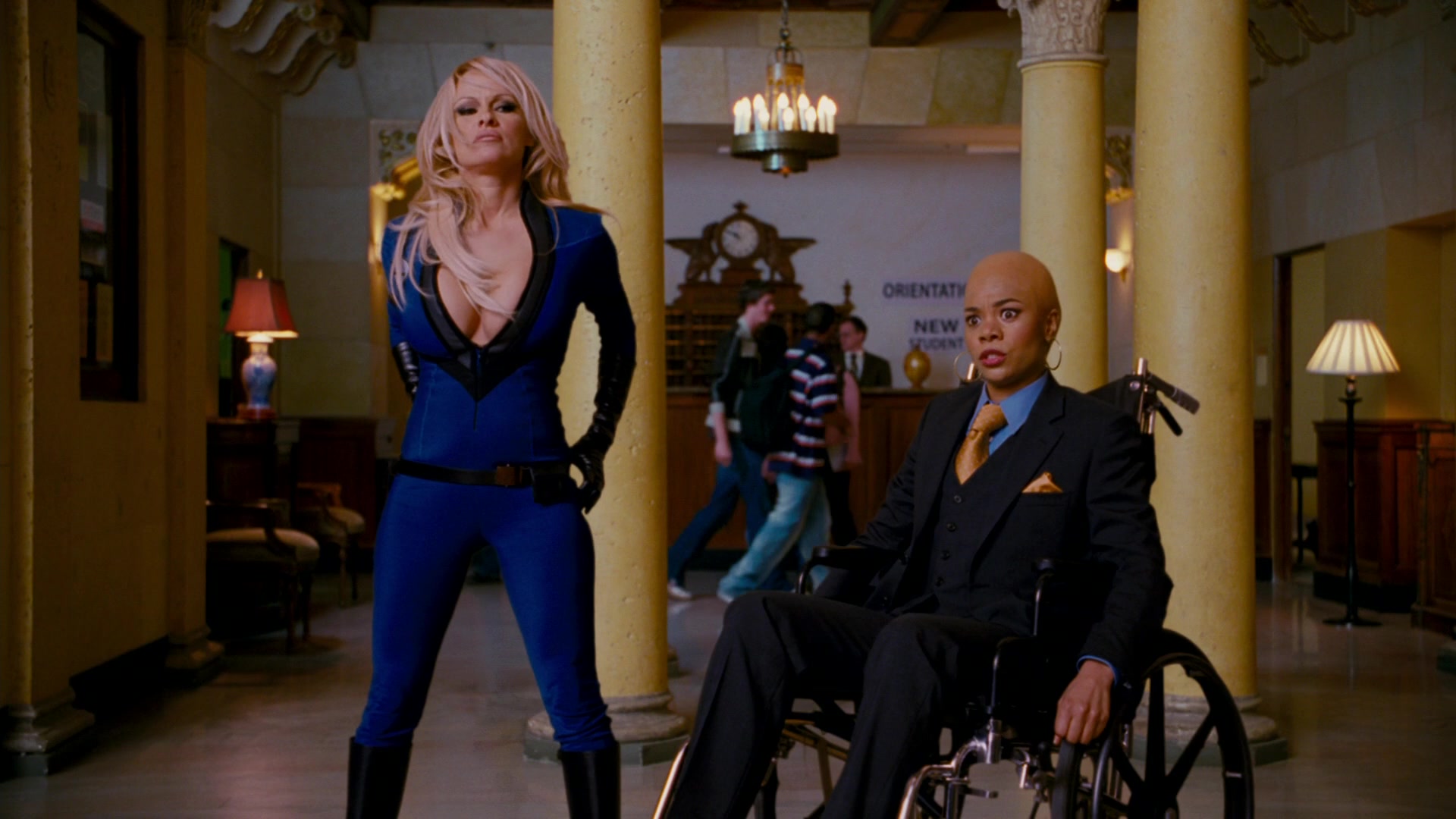 Of course, having top-tier talent like Leslie Nielsen (whose deadpan delivery is always hilarious), Kevin Hart (honestly, he’s got the most dated dialogue in the film but he’s still funny) and Christopher McDonald in primary roles helps sell the comedic convincingly, despite the less-than-enthusiastic turns by both Drake Bell, as Rick Riker, and Sara Paxton as his love interest Jill Johnson. Bell, who squints through the film like he’s got a bad case of terminal flatulence, makes a solid if indifferent fist of comedy as Rick, while Johnson plays up the saccharine blonde girlfriend role personified by Kirsten Dunst, only without the requisite flair. Neither are terrible, but as leads in an otherwise jovially anarchic comedy spoof film, they are really rather flat. 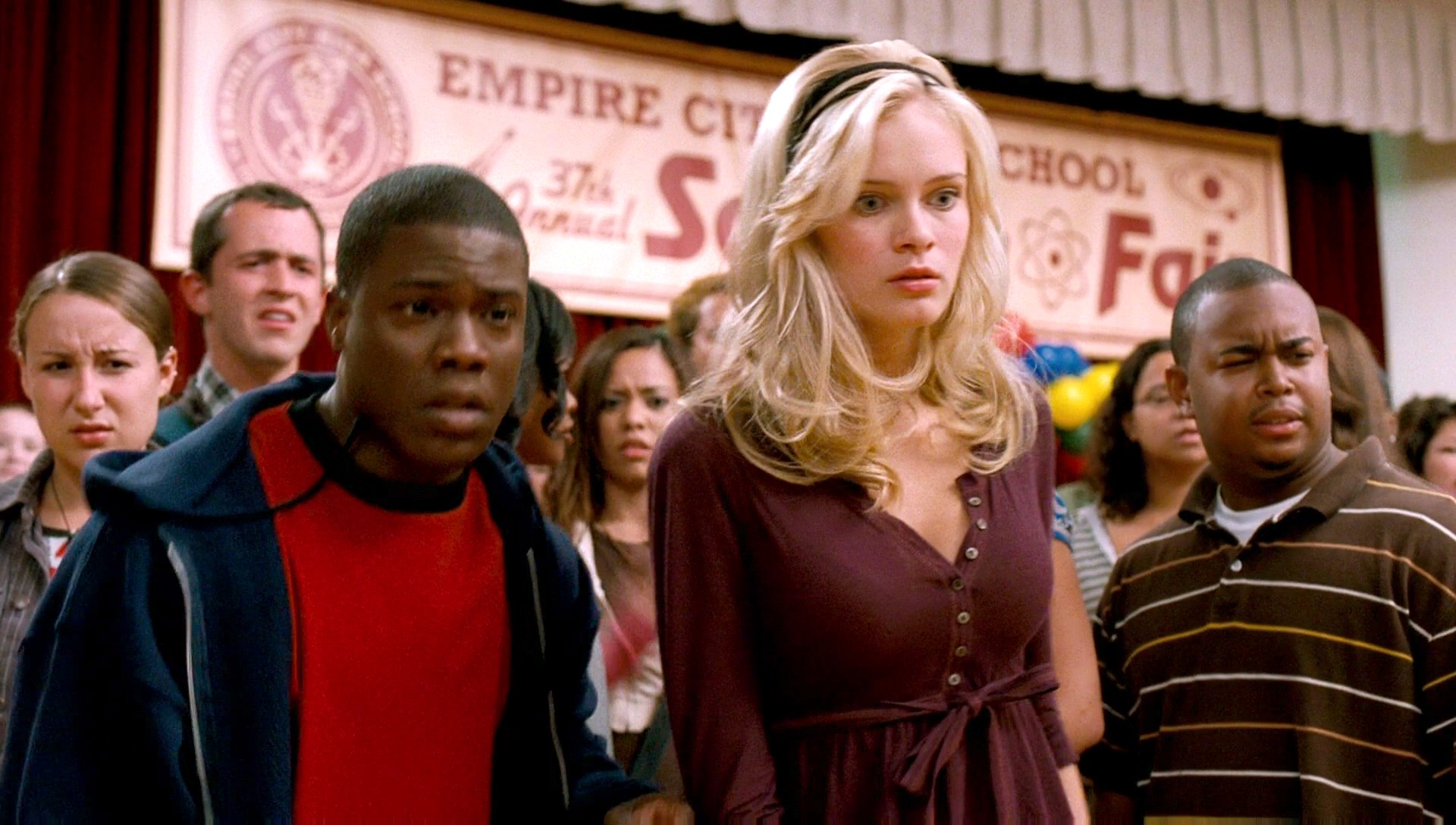 As somebody who saw all the referenced films in Superhero Movie in cinemas, a lot of the jokes worked for me. Many have dated badly since 2008, and the film’s inopportune lack of Marvel Cinematic Universe movie references (this film predated Iron Man’s release by a couple of months) makes engaging with it in a historical context that little bit more difficult, but I found plenty to guffaw at, as gags and references flew at the screen in such rapid succession I found myself enjoying it against perhaps my better judgement. Mazin’s direction is flamboyantly engaging enough to make most of the material work, and even when jokes land badly the pacing is enough that you never get time to really give a shit. You’re too busy waiting for the next set-up and zinger. Obviously, with a meagre comedy movie budget to hand, Mazin can only achieve so much with a genre flooded with visual effects but he pulls off the various stunts, CG graphics and comic-book tropes with an accomplished hand anyway, although sometimes seeing the structural and production wires when there shouldn’t be any was distracting. 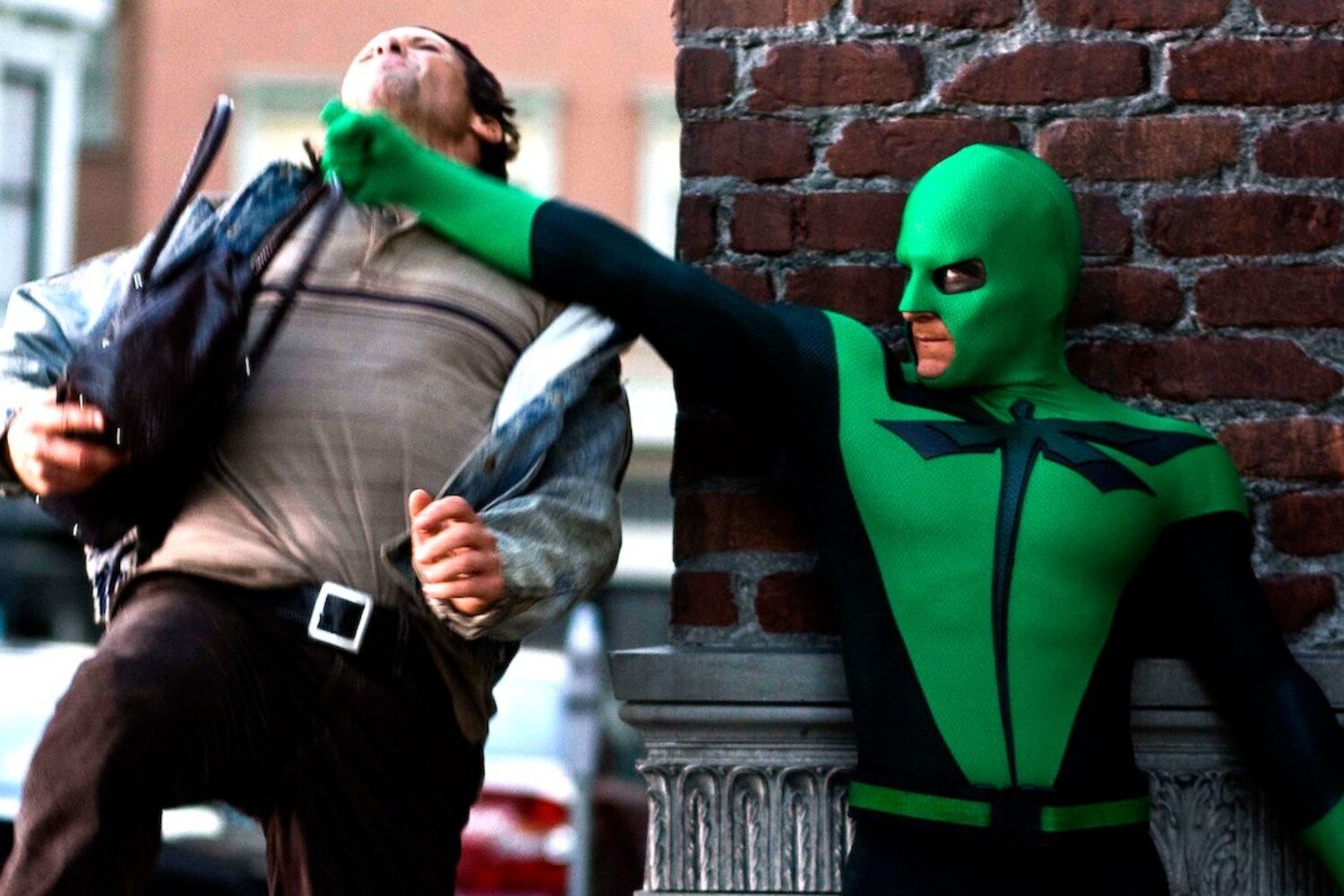 I don’t think anybody will be rushing out to catch another viewing of Superhero Movie. It’s dated badly now that audiences have moved on from lauding the Raimi Spider-Man and Fox X-Men franchises on the daily, but as an example of how to pitch and deliver a great spoof genre flick I would argue there’s few better in the last decade or two. There’s enough innuendo and sexual chit-chat to maintain interest for the bawdy crowd, the comic-book geeks will likely wince at some of the poorly done skewering of their favourite franchise players, and the skit nature of the film’s piecemeal plot doesn’t do anyone any favours, but I have to admit I really found it engaging and filmed with such carefree enthusiasm I couldn’t help but laugh along at some of the on-point humour. Just… keep your expectations low. For the lazy Sunday afternoon crowd, or for retrospective buffs, I would suggest this – and this comes with all the caveats you might expect from this kind of movie – is one of the better spoof films of the early 21st century.