Obnoxiously incoherent, this violently anarchic sequel to 2018’s legitimately decent soft reboot of the Halloween franchise lacks the former film’s narrative imagination or the flair for the cinematic, despite having the exact same film-making team and cast of characters returning. Halloween Kills is a truly awful film, wasting the talents of Jamie Lee Curtis, Judy Greer and Will Patton in one of the most inexcusably stupid outings in recent memory. Even by the franchise’s long, low standards, or even the standards of the horror genre in general, Halloween Kills is a despairingly jumbled, excruciatingly written and bafflingly awkward film, comprising a multitude of gratuitous kills amidst Curtis’ continued mythologising of Michael Myers from her hospital bed, while Jud Greer deserves better. Was I expecting Oscar-worthy acting or writing? No, but I was expecting something at least comparable with the sense of menace and foreboding the 2018 film instilled in reprising these characters, and Halloween Kills fails utterly to deliver on that expectation. 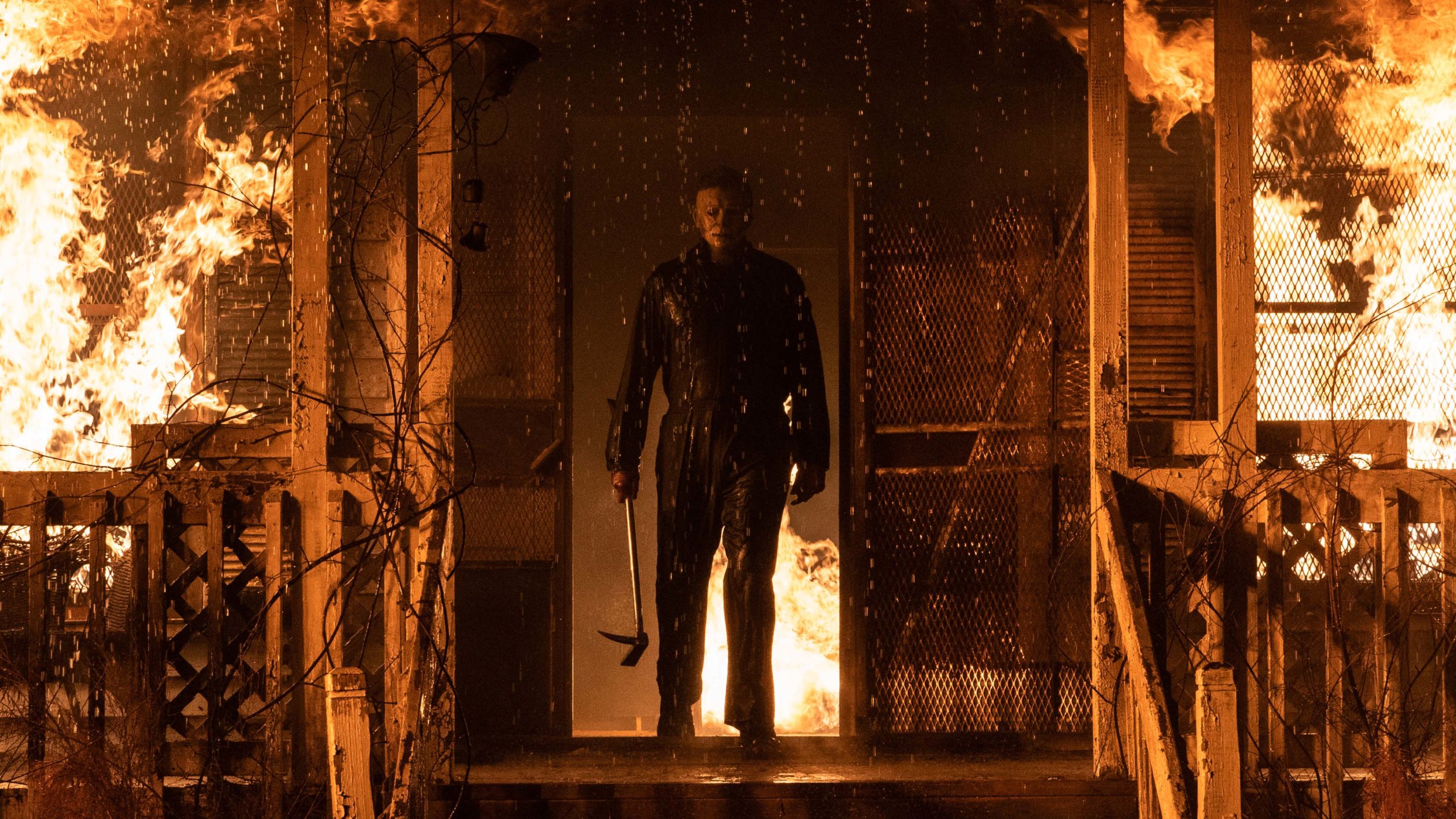 Following the events of Halloween, in which Michael Myers is supposedly defeated in the basement man-trap of Laurie Strode’s (Jamie Lee Curtis) incinerating home, Strode, her daughter Karen (Judy Greer) and granddaughter Allyson (Andy Matichak) are taken to Haddonfield hospital for recovery. However, monstrous serial killer Myers isn’t dead, and escapes the conflagration by killing a dozen or more first responders, and setting off on a path to catch and kill Strode and her family. As the town celebrates Halloween, at a nearby bar former victims of Myers recount their tales of terror, before realising the masked killer has returned for real; unable to contain the white-hot anger at the police’s failure to put Myers down, the townspeople form a lynch-mob and take to the streets to kill Michael themselves, led by Tommy Doyle (Anthony Michael Hall), Lindsay Wallace (Kyle Richards) and Marion Chambers (Nancy Stephens), all of whom had close encounters with the town’s nemesis in the 1978 film. With Laurie stuck in hospital recovering from her injuries, and Michael’s new body count rising by the minute, the rage and communal anger towards the killer threaten to boil over into outright anarchy. It would be easy enough to write Halloween Kills off as another nonsensical entry into this iffy franchise were it not for the fact that it comes on the heels of 2018’s commendably solid soft-reboot. David Gordon Green, Scott Teems and Danny McBride return to co-write the script, which picks up the moment the 2018 film ends, although somewhere between that film’s production and this they absolutely lost the plot with what was a carefully constructed examination of the effects of John Carpenter’s original movie. Halloween Kills tries to double-down on the ripple-effect Myers original slaughter had on the town of Haddonfield, but misses the mark in accomplishing this with any nuance or creativity – instead, Haddonfield becomes a cauldron of outrage and mob-mentality vengeance and in this aspect the movie loses its way badly. New characters or reprises of old characters from Carpenter’s original make appearances with varying degrees of reverence, and Myers’ influence on the film’s overall tone repeats continued motifs with sledgehammer brutality, and for all the blood, for all the ingenuity at their disposal, the filmmakers can’t muster the ability to make any of this make sense at all. 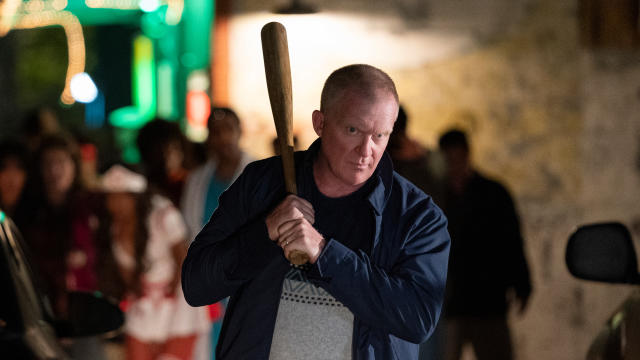 Part of the problem – nay, the main problem – is the film’s benching of its most valuable asset, Jamie Lee Curtis. After being stabbed by Myers at the end of the 2018 film, Curtis’ Laurie Strode spends the entire film in hospital – let me repeat that: she spends the entire film in a hospital room waxing lyrical with Will Patton’s Deputy Hawkins – which is the equivalent of leaving Ripley on the Sulaco to watch the marines go down to LV426. As stupid a creative decision as this is, and it is one of the stupidest ones in living memory, the filmmakers try to one-up the 2018 film by having characters associated with the 1978 film return to the screen as older adults, and in almost every respect this fails. An early flashback repurposing the look and feel of Carpenter’s eerie original movie suggests a plethora of ancillary characters who also encountered Myers on his first big killing spree, which bulks out the cast of secondary characters enough to ensure the kills-per-minute count on this movie is startling for anyone watching. What it does, though, is rob the Strode storyline from the 2018 film from any decent momentum, consigning Curtis, Greer and Matichak to passive observers in their own movie, and that’s a creative decision from David Gordon Green that hamstrings the franchise considerably. How you get Jamie Lee Curtis, in her own franchise no less, to simply spend the film sitting in a room poetically describing the effect Michael Myers has had on Haddonfield without having her do anything else at all, is a terrible choice. At least the kills are good though, right? Well, yes and no. The body count and inventiveness of many of the film’s butchery is high and cool, and there was plenty of wincing with the overpowering sound of foley effects representing the tearing of flesh, the thudding of knives, and the snapping of bones, but at no point was I ever shocked. I mean, really, truly, gaspingly shocked. At a ratio of about three kills every minute Halloween Kills certainly lives up to its title. But it’s all a nonsense, with indecipherable cinematography, dreadful editing and stylistic ineptitude making watching this film a laborious chore. Smothering your film in darkness and genuinely refusing to build any tension through an absence of action might feel modern and cool to filmmakers, but for audiences hoping to feel any sort of emotion throughout it’s a vast, bloodsoaked disappointment. Rehashing John Carpenter’s iconic theme for the film also feels distinctly underwhelming here, although if “by-the-numbers” is the kind of filmmaking you’re aiming for, achieving it in such a manner is appropriate. 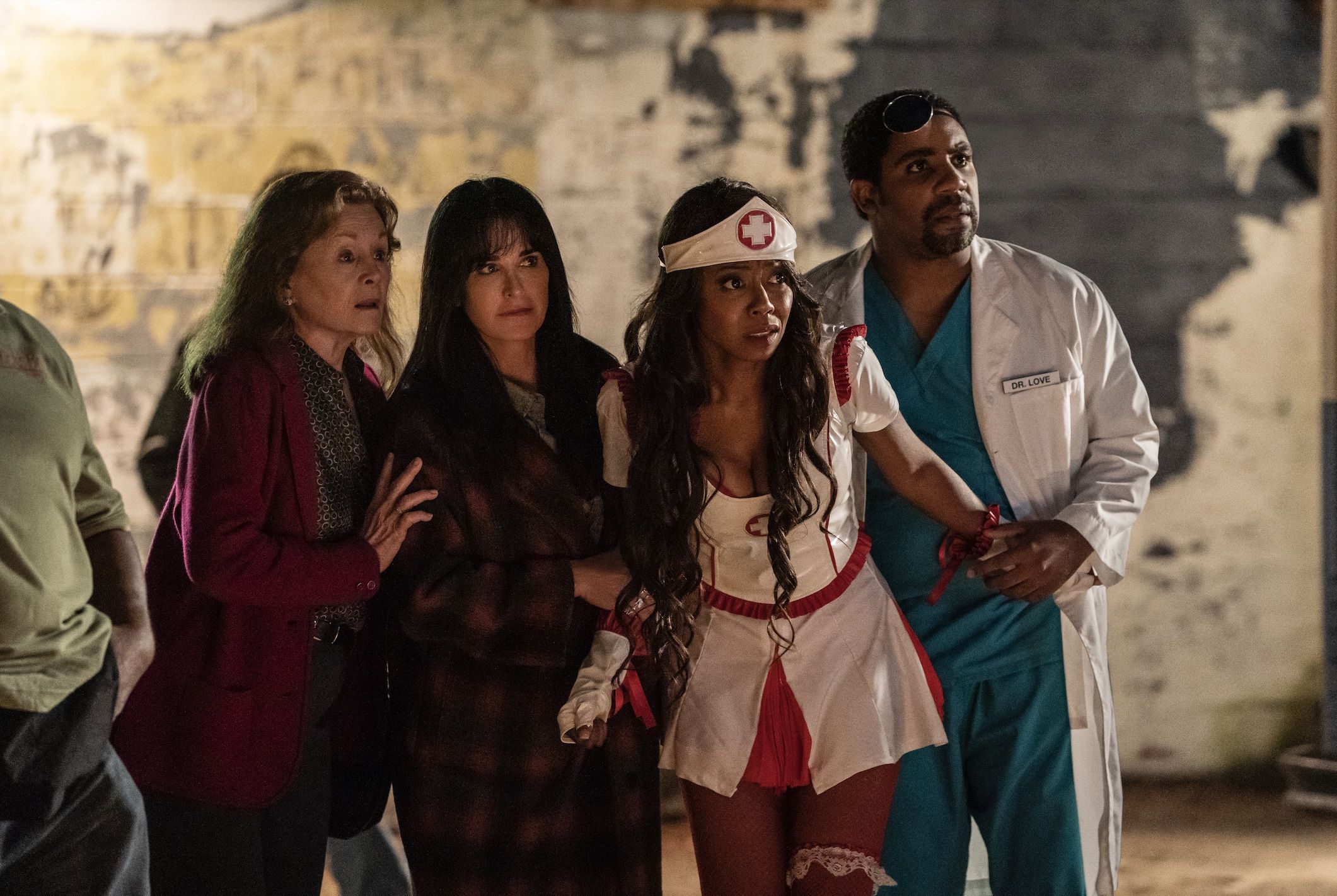 Halloween Kills is a loudly dreadful film, filled with astonishingly terrible story decisions, execrable dialogue and a plethora of wasted characters with little or no redemptive quality. I have no doubt the film will satisfy the hardest of hardcore franchise and genre fans, but casual viewers should be aware that what the 2018 Halloween promised us, Halloween Kills fails to deliver on. As unsatisfying a sequel as there has ever been.