Problematic prejudice to Central and South American people aside, Clear & Present Danger is an ambitiously sprawling, if painfully inert, action-thriller from the pages of veteran espionage novelist Tom Clancy, a Jack Ryan sequel to both The Hunt for Red October and Patriot Games, the latter of which saw Harrison Ford grumble his way into the role of Ryan’s famous virtuously unblemished data analyst. With several of Patriot Games’ stellar cast reprising their roles for a paycheck, and Harrison Ford’s Jack Ryan merely an accessory to other people’s work, Clear & Present Danger is an unambiguously patriotic but a fairly pedestrian genre entry, with returning director Phillip Noyce unable to gather convincing action sequences or genuine sense of jeopardy despite solid cinematography or workmanlike editing. 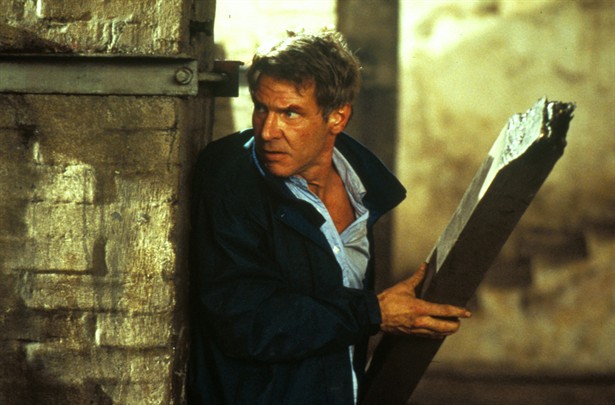 After the US Coast Guard intercepts a vessel sailing the Caribbean, and discovering the bodies of a family closely associated with the American President (Donald Moffatt), CIA analyst Jack Ryan (Ford) tries to uncover the identity of a mysterious individual working for the drug cartels of Colombia. This individual, Colonel Felix Cortez (Joaquim de Almeida) is currently working for local drug lord Ernesto Escobedo (Miguel Sandoval) but is obviously not doing everything he can to protect his employer, leading Ryan and his CIA buddies to discover that his boss is really NSA James Cutter (Harris Yulin) and chief henchman CIA Deputy Director of Operations Robert Ritter (Henry Czerny). The President, at the behest of Cutter, instigates an incursion by US forces into Colombia to disrupt Escobedo’s drug supplies, with the small squad of men led by CIA operative John Clark (Willem Dafoe), and commanded by field officer Captain Ramirez (Benjamin Bratt); unfortunately, the closer Ryan gets to uncovering this illegal activity, the soldiers soon find themselves cut off from any rescue and left to die in the South American jungle.

With its slew of hoo-rah American exceptionalism and declarations of danger to the United States sounding awfully like imperialism at its finest, Phillip Noyce’s second film in the Jack Ryan franchise plays to the cheap seats with broad-scale simplistic dialogue, easy-to-follow plotting and a singular dearth of characterisation that makes this the equivalent of junk-food for your brain. The film’s central conceit sits centrally in the Nixon-era “War On Drugs” manifesto, which has not aged well at all by today’s standards, but even by today’s standards the film’s rather gung-ho tone and Harrison Ford’s stalwart goodness are jarring with their inelegance and pernicious subtext, despite what I would imagine was the best of intentions in the screenplay adapted by John Milius, Donald E Stewart and Steven Zaillian. This is a trio of writers who ought to have at least made the film distinctly intelligent. Instead, we get treacly, insipid Latino machinations and single-dimensional characterisations from everyone here, even the almighty Harrison Ford looking like he’s bored shitless to be on the project.

The premise itself isn’t a problem, moreso the tone the film takes with tackling such an important subject matter. Drugs were (and continue to be) a major problem in American society and the proliferation of South American imports of the illicit substances were famously brought to a head with Richard Nixon’s declaration of a quote-unquote “war” on their production and transport to the continental USA, a war continued by both Presidents Reagan and George HW Bush, and it makes the film’s 90’s era sensibility ring a little truer than it might had the film be made today. That said, the film’s wide-brush slathering of Colombia being a a stereotypical den of crime and villainy, with drugs at every turn, is problematic at best, hideous at worst, with American consular personnel being targets for the various drug cartel militias at almost every turn and seemingly without redemption. In painting the world of South America with such ferocious hatred, one suspects the film’s rat-a-tat violence and grungy, bloodstained aesthetic would have played well in Middle America, if not country-wide, as American populism designed to placate a country ruffled by the collapse of the USSR and the first Gulf War.

As much as Harrison Ford is a figure of much adoration among the general public, for his roles in such iconic films as Raiders Of The Lost Ark and Star Wars, the star look bored out of his mind in Clear & Present Danger. There’s no danger to the role, no development beyond a square-jawed goody-two-shoes and morally implacable CIA agent and this lack of light and shade to Jack Ryan makes him a fatally flawed figure. That and Ford’s performance being one of uncomfortably lengthy pauses and bland, charisma-free emotional heft. It’s as if the inclusion of Jack Ryan is an afterthought in the film; as the lead character, you kind of expect things (such as the plot) to involve him in some way, instead of merely occurring around him as it does here. Hell, even Ryan’s own family are given extremely short thrift, appearing in a clutch of scenes if for no other reason than to force us to remember that Jack Ryan is a family guy (in case you’d forgotten their near-death experience in Patriot Games), which is a waste of the talents of Anne Archer and a very young Thora Birch. Archer’s role is reduced to the perennially concerned “doting wife” archetype and it’s annoying as all get out. Hell, even poor James Earl Jones, as Ryan’s paternalistic CIA boss Jim Greer, who bows out of the franchise with terminal cancer in this film in order to protract the lengthy running time with some kind of ill-conceived motivational trajectory for Jack Ryan to follow, seems to have phoned this in, a sad comedown for the actor following his solid work in the previous entry. 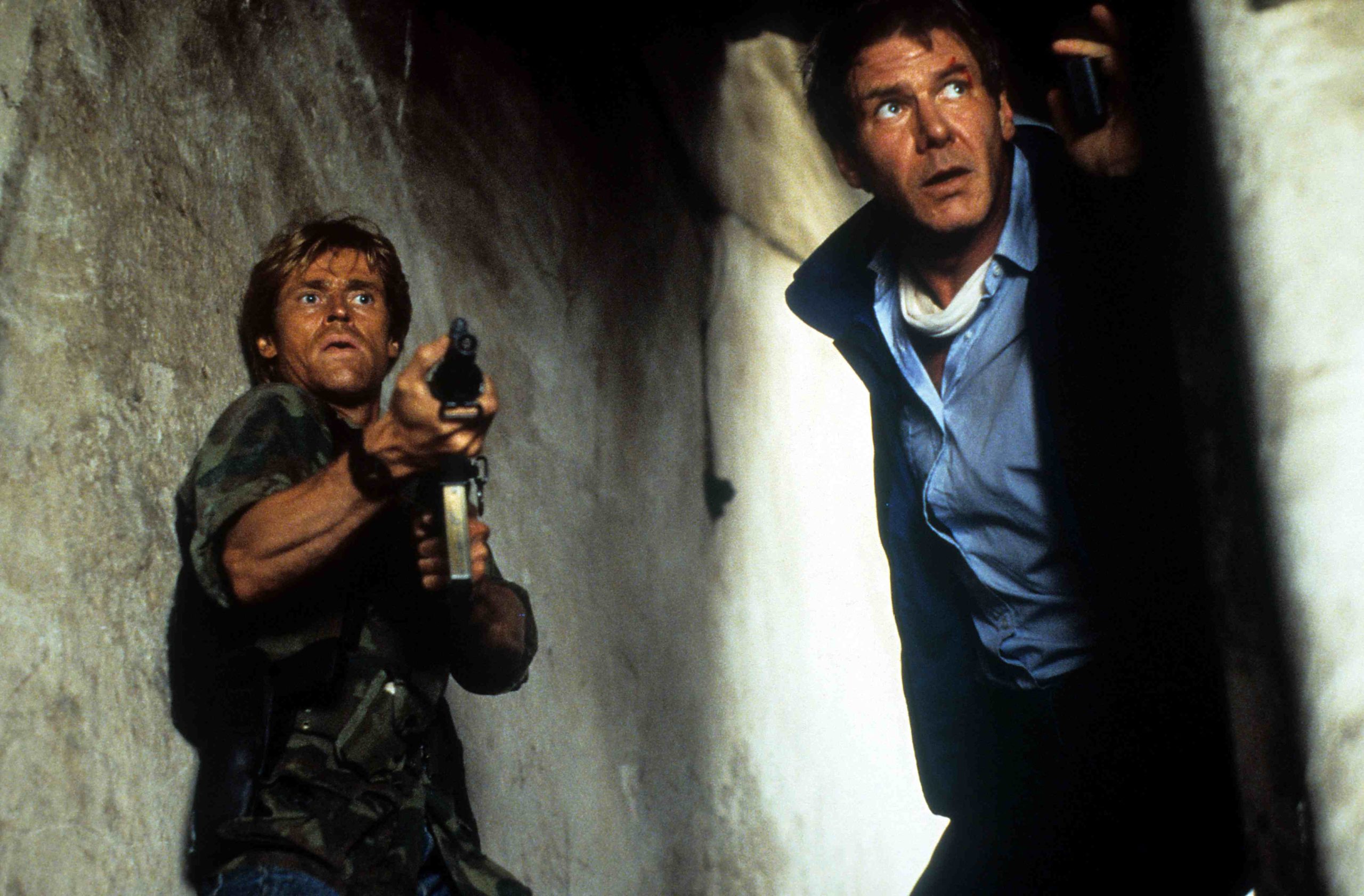 In terms of the film’s positives, Noyce and his production team had the good fortune to luck into some solid supporting casting. The likes of Harris Yulin, Willem Dafoe, Donald Moffatt, Benjamin Bratt and Raymond Cruz are a continued delight, while perennial screen villain Henry Czerny proves yet again he should have had a bigger career playing complete assholes. Watching the likes of Greg Germann, Vondie Curtis-Hall and Ted Raimi appear as various CIA operatives at the Langley HQ is also a blast, despite the brevity of their appearances, while Joaquim de Almeida and Miguel Sandoval play ruthlessly convincing – if entirely cartoonishly generic – South American bad guys. You never get the sense that these characters have life beyond the screen, or any depth to their personalities, but watching actors of this calibre cavort around the jungles of Colombia or the wide-clear halls of Langley’s bureaucracy is always something to enjoy.

Phillip Noyce’s attempts to generate excitement through the film’s action scenes isn’t one of the film’s strongest aspects. He has a general approach to action that could be described as “competent,” without really elevating the thrills and bloodshed a genre film such as this might expect. Sure, there’s explosions, stunts, lots of guns and even a startling missile strike on a drug cartel den, but betwixt the concussions and bloody violence is an insufficient dramatic narrative held together with steady cinematography and bland, uninspiring technique. At times the film sputters to life (the missile strike on the gang headquarters mid-film is one of the more tense sequences Noyce elicits) but more often than not it seems to sleepwalk through a complex web of subterfuge and too-easily-uncovered betrayal, wrapped up in an American fervour of a distinctly incongruous nature. You know things aren’t working when the film’s hero – a suit-wearing bureaucrat with an aversion to violence – only gets a chance to show his moxie in the final gunfight shootout, having spent the entire film either staring into the abyss of 90’s technological obsolescence or waving around CIA intelligence briefings with incredible vivacity, and Ford’s apparent disinterest in performing the role is evident. Ford is essentially a supporting character in his own film.

Clear & Present Danger feels too generic and by-the-numbers to make much impact in today’s action film market. The filmmaking style is definitely “old school”, and unfortunately the cracks on Noyce’s directorial ability are only getting wider the further past its debut this film is viewed. Hewn from a blanket of bored bricks, Harrison Ford’s second foray as Jack Ryan is a listless, lifeless affair elevated notably by its solid supporting cast and the script’s doubling-down on 90’s-era propagandist themes of a tsunami of drugs coming from South America, which skews badly when viewed now. Scant thrills and a shallow, meaningless plot render this film anything but dangerous, despite the best efforts of most involved.