Principal Cast : Joey King, Dominic Cooper, Olga Kurylenko, Veronica Ngo, Ed Stoppard, Alex Reid, Katelyn Rose Downey, Kristofer Kamiyasu, Fergus O’Donnell, Antoni Davidov.
Synopsis: When a beautiful, strong-willed princess refuses to wed the cruel sociopath to whom she is betrothed, she is kidnapped and locked in a remote tower of her father’s castle. With her scorned, vindictive suitor intent on taking her father’s throne, the princess must protect her family and save her kingdom.

It’s hard to know where to begin with this violent fairy-story actioner, now showing on Disney+’s STAR platform (Hulu in the USA). A violent riff on the Raid movies if they were mixed with Rapunzel by way of Pixar’s Brave, steadfastly led by The Kissing Booth franchise lead Joey King, The Princess is a film desperate to latch onto the young streaming star’s legion of teenybopper fans and, inexplicably, people who enjoy hardcore bloody violence. The disparate demographics The Princess obviously aims at are never, ever going to appreciate this startlingly fatuous outing, with the bloody violence too much for a typical “princess” movie and the milieu too saccharine for the more adult viewer, leaving the film to tread an increasingly stupid line between both worlds. Sadly, Vietnamese-born director Le-Ven Kiet’s furious filmography back in his home country doesn’t translate to this hodgepodge miasma of production values and kooky, eye-rolling Americanised action torpidity, which is a shame because his previous films have all had some element of shock value and you’d expect a more entertaining ride. 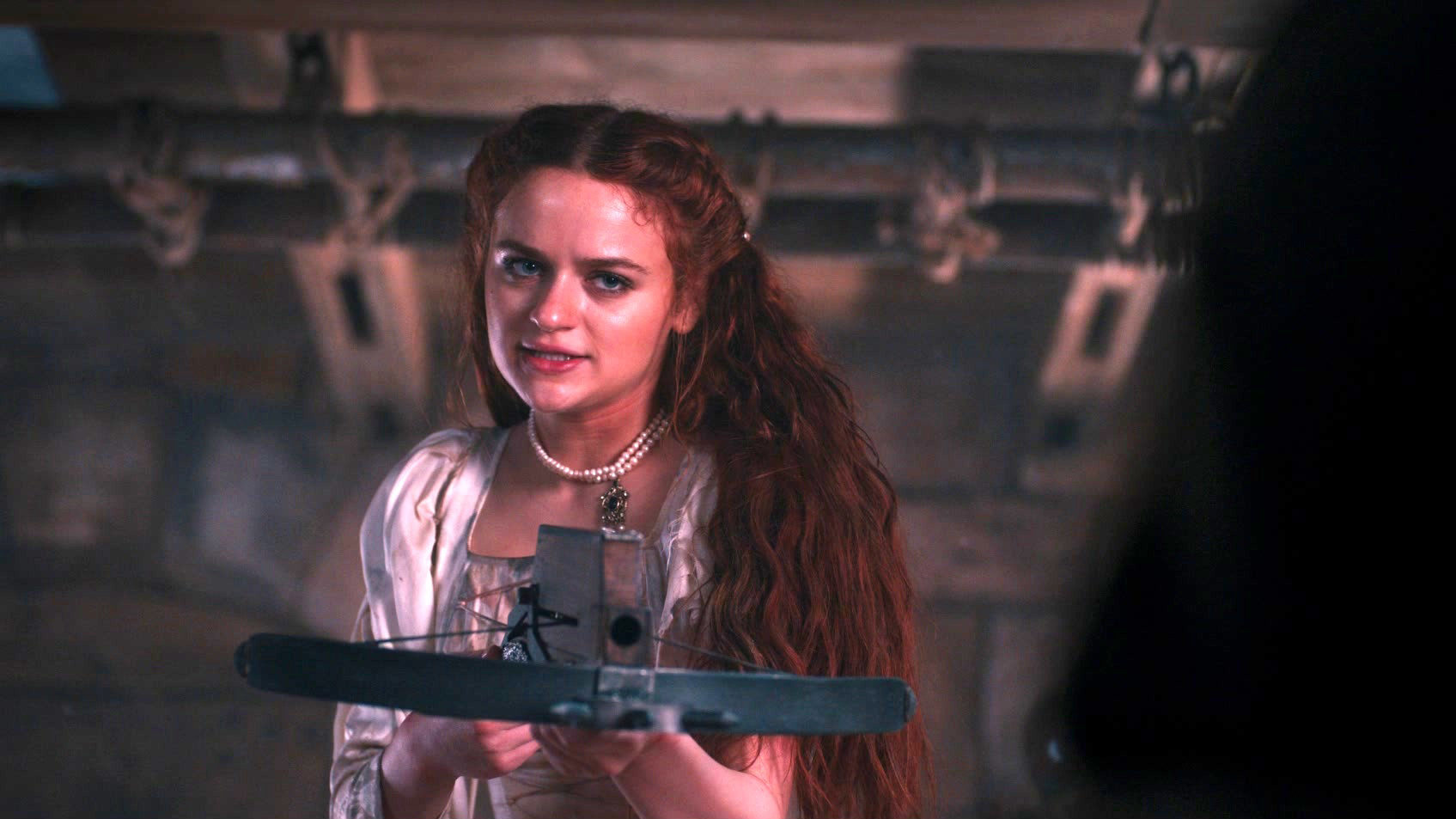 A beautiful young princess (Joey King) wakes from unconsciousness to find she’s being held prisoner at the top of a high tower in her father’s expansive castle, and under guard. A proficient combat brawler, the princess escapes custody and begins to make her way down the tower, where she discovers hew parents, the King (Ed Stoppard) and Queen (Alex Reid) have been taken prisoner by the cruel Julius (Dominic Cooper), who wants the Princess’ hand in marriage to assume control of the kingdom by force. The Princess battles a wide variety of Julius’ henchmen, as well as his second-in-command, the evil Moira (Olga Kurylenko), while being assisted by her combat trainer Linh (Veronica Ngo) and tiny sister Violet (Katelyn Rose Downey), and must take a stand against Julius’ evil in corrupt matrimony against her will. 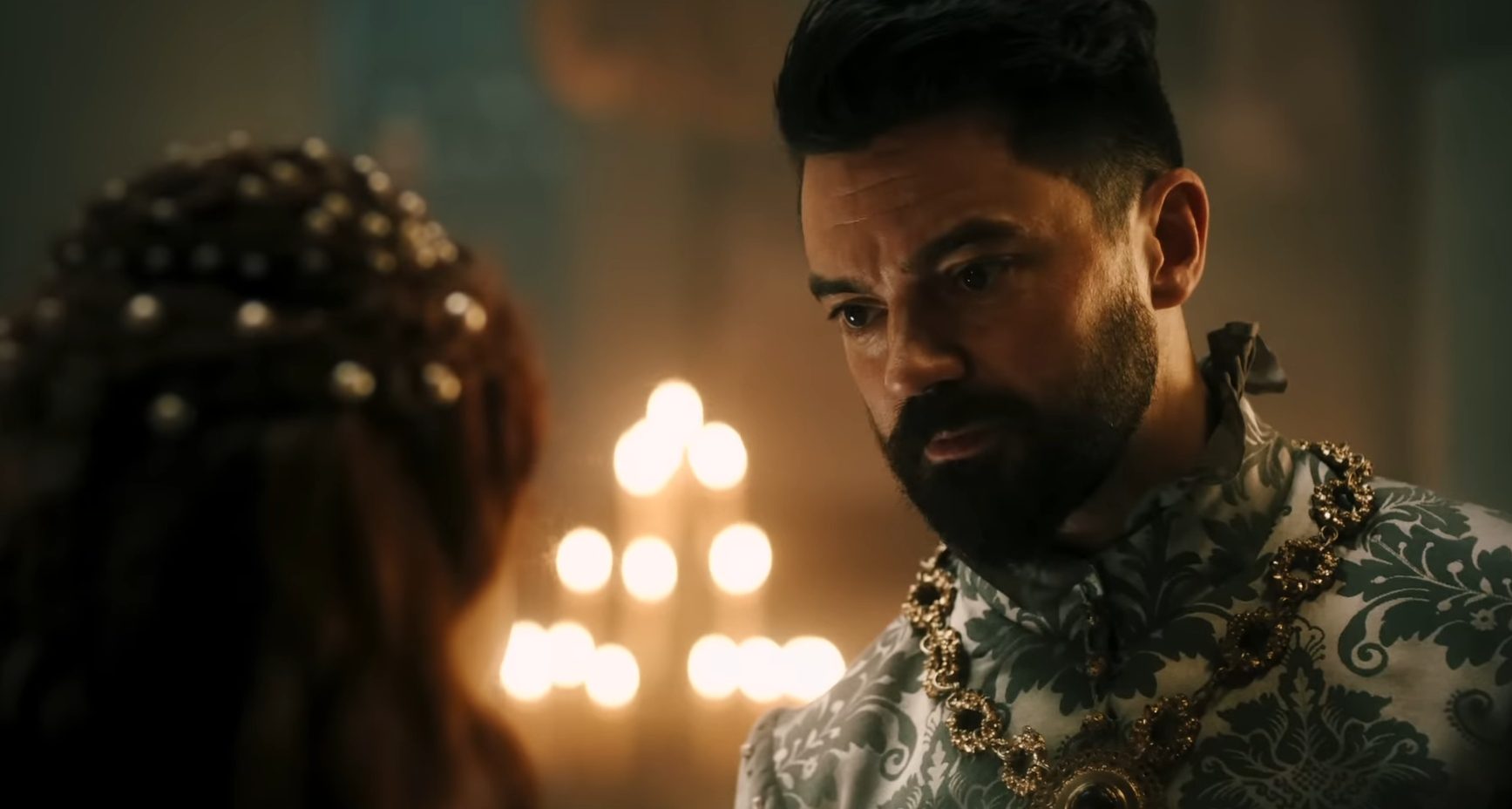 I’m not going to sugar-coat this: The Princess is absolute garbage. Joey King isn’t an action star, no matter how hard this film endeavours to cast her as one, and with such a dire script she’s unable to really do much beyond flinch, highkick and flip her way into an orgy of mind-numbing violence that’s as insufficient as it is inane. Ben Lustig and Jake Thornton’s screenplay is risible, a trashy fairy-story nonsense with kings, queens, villains and countless armoured henchmen all for the titular kick-ass royal babe to benchpress into oblivion as she slashes, slices and pummels the various peons to victory. The dialogue makes this borderline unwatchable, the delivery from the poor cast payed off to attend filming this mess trying hard to countenance believability with the facile, dementedly generic lines they’re given to utter, and nobody, not even Dominic Cooper, manages to make it out of this movie with dignity intact. The very few chuckles on offer are fraught with childlike simplicity, a gormless humour of falling bodies, flaming knights and one huge fat dude climbing to the top of the tower with all the “let’s laugh at the overweight guy joke” awkwardness that brings. The whole script feels tone deaf, clashing modern violence stylings with a calamitously television-budget production value and a weird pre-teen-audience-vibe that throws everything about The Princess out of whack. 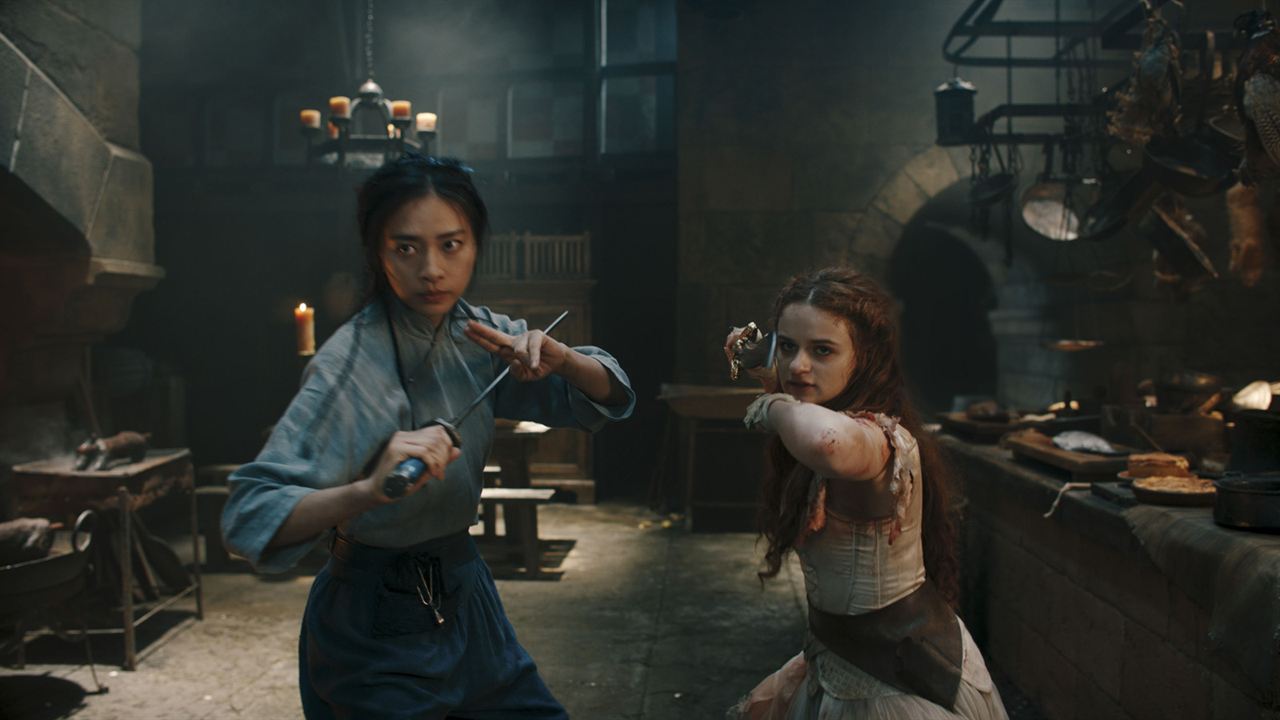 Joey King, herself a co-producer on this, has a character that’s as single-note and paper thin as it’s possible to be, a character as personality-and-charisma-free as a puddle. There’s an idiotic “she’s been trained by a martial arts specialist since she was young” story motif, which brings the notable star power of Veronica Ngo into the story, which has a huge whiff of faux-feminism masquerading as proto-masculine genderswapping, and King’s physicality is such that she at no point ever feels like a legitimate match against the countless henchmen she has to battle through. We’re meant to accept that Joey King’s Princess, standing four-foot-three with the musculature of Sheldon Cooper on a cold day, is a stone-cold badass warrior woman who’s as handy with a sword as she is with a steely glare? Sorry, I didn’t buy it for a moment. King’s gasping, high-school-level performative overacting is laughable, replete with smatterings of blood and gore but utterly baffling when you consider the stature of almost everyone else around her. Veronica Ngo, by contrast, actually looks and moves like she could take down a football team with one punch, and practically runs rings around her on-screen sparring partners; maybe the film should have been about her, instead. 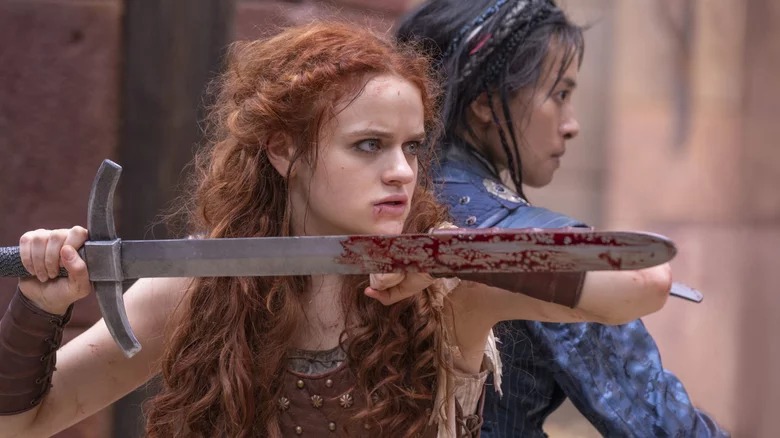 Then there’s Dominic Cooper and Olga Kurylenko, both of whom are astoundingly terrible in this. Kurylenko was never the world’s greatest thespian at the best of times, and with a character so hideously written there’s no way she could do anything but fuck it up. Her role as the whip-wielding Moira, all goth makeup and everything, is a flaming shitshow in The Princess and frankly, one of the worst villain roles I’ve seen this year. Arguably the worst villain role I’ve seen this year, mind you, is also in this film: Dominic Cooper’s Julius is the stupidest, most cringeworthy, poorly written and acted screen performances I’ve seen in a very, very long time. Bizarrely, the role seems to have been written in the mould of Alan Rickman’s Sherriff of Nottingham, but with less humour, and Cooper’s performance of the part is capital-H horrendous. Neither Cooper nor Kurylenko have a shred of chemistry together as a pairing, which is also an egregious oversight on the part of director Le-Van Kiet, who spends more time focusing on the action sequences than he does the terrible dialogue. I mean, I get it – a violent action film doesn’t demand Oscar-winning screenwriting, but you have to hope at least somebody reads this script out loud before making actors perform it in front of a camera. 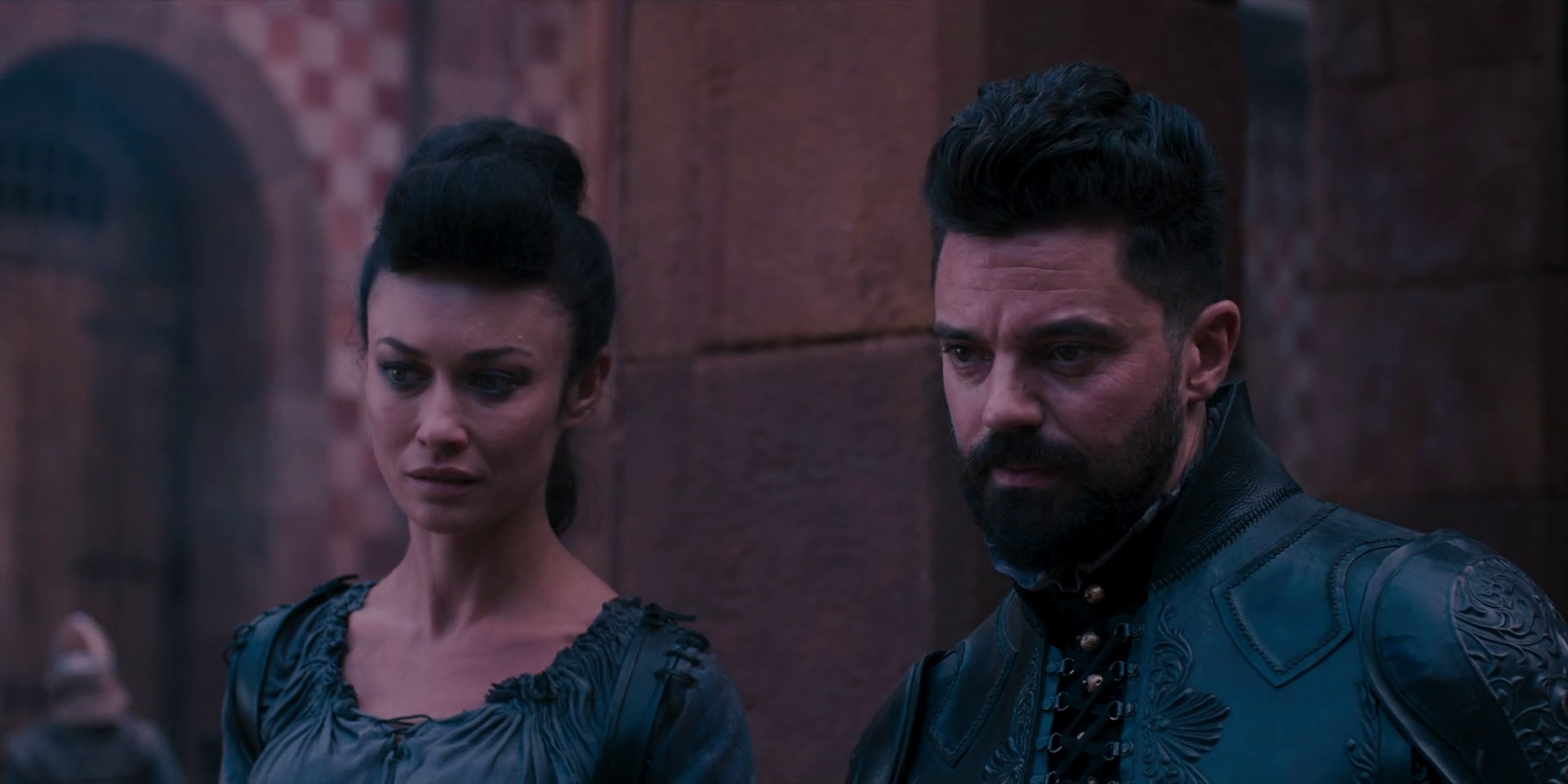 In terms of action, The Princess also fumbles the ball. Le-Ven Kiet’s Furie was a bona-fide smash in his home country, as well as a minor success internationally, a showcase for his visual talent and ability to direct action. That raw guerrilla ability seems to have had the life wrung out of it when he steps onto a Hollywood set: The Princess’ action is stop-start, ho-hum and decidedly mediocre. Sure, it’s bloody and violent and there’s plenty of sweet, sweet gore to keep undiscerning audiences happy, but the action has no impact, no heft, and becomes tedious quite quickly. The reason for this? A story without meaning. If you don’t care about the characters, or at least have interesting stakes in play, the action sequences in which the lead character is in jeopardy lack the impact audiences need to cling to, in hope that things turn out okay at the end. That the story revolves around a shitty arranged marriage and Dominic Cooper’s unbridled rage (for no particular reason, maybe he has a small cock?) makes the lengthy, ongoing slash-n-dash swordplay and gravity defying acrobatic combat sequences seem almost an afterthought. Some have described The Princess as “The Raid in reverse”, which make narrative sense, but in giving Joey King’s titular character almost no development beyond “she’s a kick ass princess” the breathless and nonsensically comedic fight scenes almost become parody. Hard to enjoy it when the tone says “laughter in every corner” but the visuals say “blood splatter everywhere!” and the leading lady lacks the acting chops to pull off such a demandingly physical role. 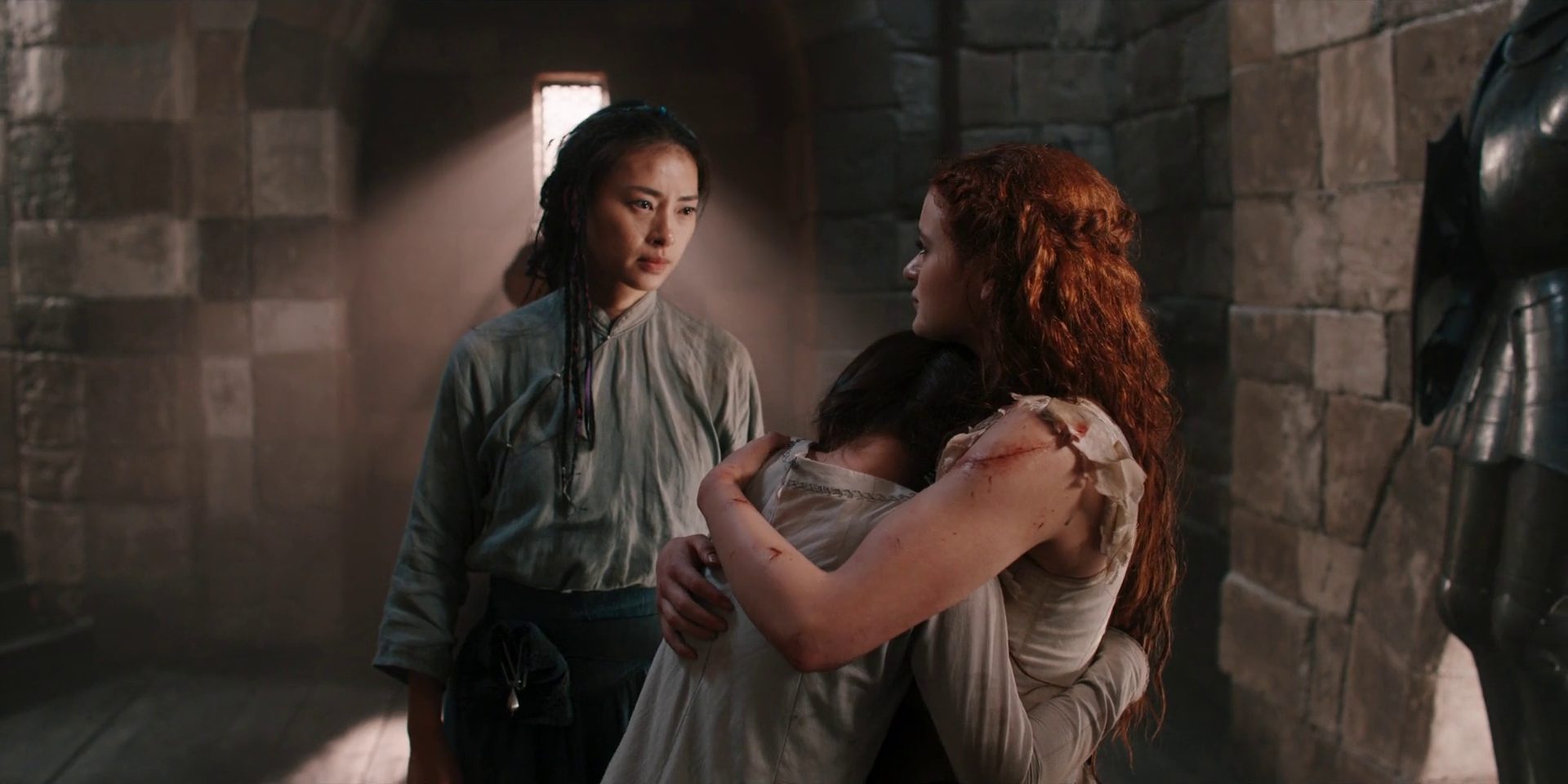 The Princess is unmitigated shit. It’s not even fun in a pleasant, time-wasting sense of the ridiculous, and charmlessly thinks it’s far more serious than it manages to be. That people read this script and thought “yeah let’s sink millions into this” is beyond the pale, let alone allowing people to watch it in public. Not a single person in front of, or behind the camera, gets away from this mess with any respect; Joey King isn’t an action star and should realise this as fast as possible, Dominic Cooper’s hiss-worthy villain performance will almost certainly win him a Golden Raspberry, and Le-Van Kiet’s American career is almost certainly over before it’s even begun. Note for Hollywood: if you get a popular international director of fun, well-made low-budget action films and give them a Hollywood budget to make an American film, ask yourself why? Why put these poor people through this? Take what you love about their filmography and make more of those films with Hollywood money! It’s become problematic to expect Asian directors to work well within a Hollywood aesthetic, and The Princess just proves that point. Remember when Hollywood tried to turn Jackie Chan into an American movie star? Or John Woo into a major Hollywood director? Le-Van Kiet deserves better than this.

At no point is The Princess a good idea to watch, and everyone involved should be fucking ashamed of themselves.