Starting out as a spec script co-written by a young Matt Reeves in college, Steven Seagal’s Under Siege sequel, subtitled Dark Territory, is (surprisingly) a superior film to the original in almost every way, although in no way should it be assumed that Under Siege 2 could be considered “good”. In fact, at times it’s downright risible, an incompetently acted action vehicle barely hiding its lead actor’s inability to.. you know, act, and offering only a marginally better overarching plot device to manifest yet another Die Hard clone boasting the culinary and hard hitting anti-terrorist skills of former Navy SEAL Casey Ryback. 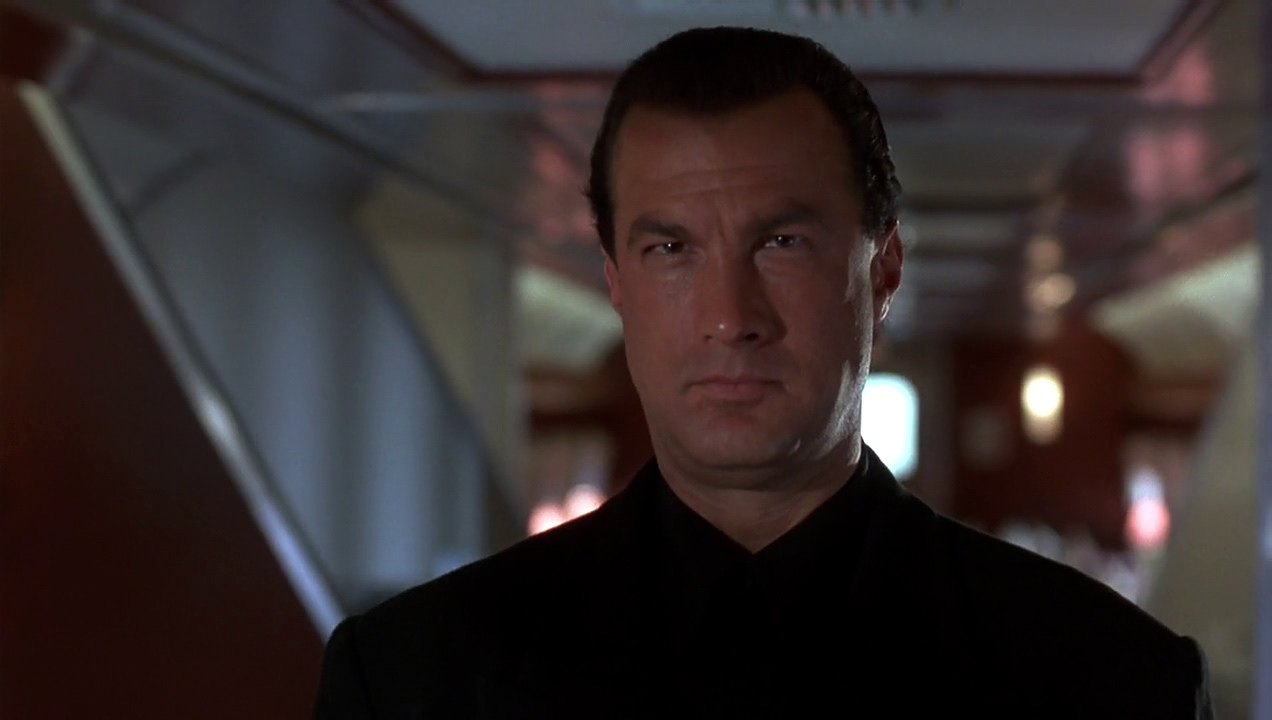 Ryback finds himself yet again in the wrong place at the right time, travelling via train across the Rocky Mountains with his niece, Sarah (Katherine Heigl – Grey’s Anatomy) when their locomotive is hijacked by mercenaries led by Marcus Penn (Everett McGill), who is working for recently missing genius computer programmer Travis Dane (Eric Bogosian). Their plan? To take remote control of a mysterious orbiting satellite that has the power to create underground earthquakes anywhere on Earth. Their ransom? A billion dollars. In a hidden military base deep in the Colorado mountains, Admiral Bates (Andy Romano) and Major General Stanley Cooper (Kurtwood Smith), as well as Captain Nick Agrza (Dale Dye), work through various military attack options with very little success. It’s all up to Ryback, together with train porter Bobby (Morris Chestnut – Ladder 49, The Call) and a grabass load of sheer pluck, as they attempt to take back the train, rescue the hostage passengers, and prevent global catastrophe. 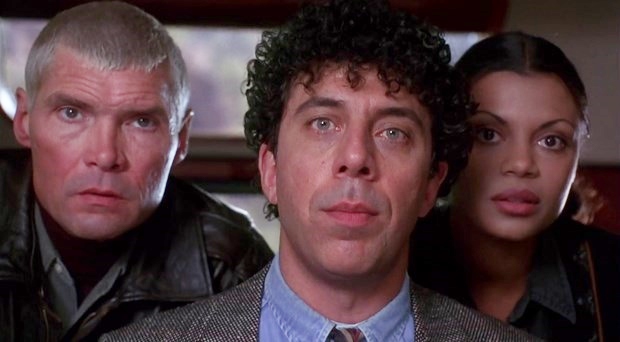 Although Under Siege wasn’t the greatest action film of the early 90’s, it did solid enough box office to warrant a sequel; duly noted, says Hollywood. Along comes Under Siege 2: Dark Territory, a convincingly competent follow-up film that ekes out minor character development for Seagal’s stoic, stone-faced Ryback, throws in a nubile young family member in the form of barely pubescent Katherine Hiegl, and pits the kickass black-suited warrior against the best modern 90’s technology had to offer. As with the previous film, the characters are one-dimensional, the plot as nonsensical as all great 90’s wild-eyed actioners tend to be, and Geoff Murphy’s dynamic direction is well above passable given the budget, which was almost double that of the original movie. The script was written as a spec sale by then college student (and soon to be blockbusting Hollywood director) Matt Reeves (together with Richard Hatem), if you can believe it, although one suspects the original premise and structure was greatly adjusted not only to suit Seagal’s performative strengths but also his weaknesses – emotion, gravitas, a sense of showmanship – and while the plot is just as loony as that of the first film, at least the stakes here feel a lot more prescient. An orbiting satellite with the ability to destroy entire continents, shows obliterating a variety of objects from the reaches of our upper atmosphere, sends a chill down the spine of anyone familiar with Reagan’s Star Wars orbital defence programme. Much like the original, the production wisely surrounds Seagal, who is as wooden as a tree trunk and moves almost as gracefully, with a bunch of solid to mid-range actors all overachieving their pay packets in this adventure in high hokum. Eric Bogosian’s Dane, a wild-eyed computer genius, is a lot more restrained than either Tommy Lee Jones or Gary Busey in the first film, although the longer the movie goes the more he slips into moustache-twirling, cheese-eating capital-V villain mode, which works this time because his motivations are far more clear than previous bad guys in this franchise. Everett McGill (Silver Bullet, Licence To Kill) playing the bleached-blonde master mercenary serving as the central foil for Ryback is a fun watch, the dude understands the assignment and plays his boo-hiss bad guy to the hilt. Morris Chestnut is the token comedy relief in this here lark, as a wily yet insufficient train porter who befriends Ryback once the shit goes down; I like Chestnut as an actor but he overplays things a little here. Katherine Heigl is solid as Ryback’s niece, and the young actress (she was seventeen at the time the film released) easily shoulders the considerable burden of being the emotional centerpoint for her uncle’s bland, unnervingly dispassionate character. Supporting roles to more “hey, it’s that guy” actors in the form of Royce D Applegate (Gettysburg), Kurtwood Smith (That 70’s Show, RoboCop), Dale Dye (every film in which the US military is depicted in a good light), Andy Romano (reprising his role from the previous film as a determined Admiral Bates) and Jonathan Banks (Breaking Bad, Beverley Hills Cop and Gremlins) round out a great cast cashing in on the franchise’s easy-money nature. 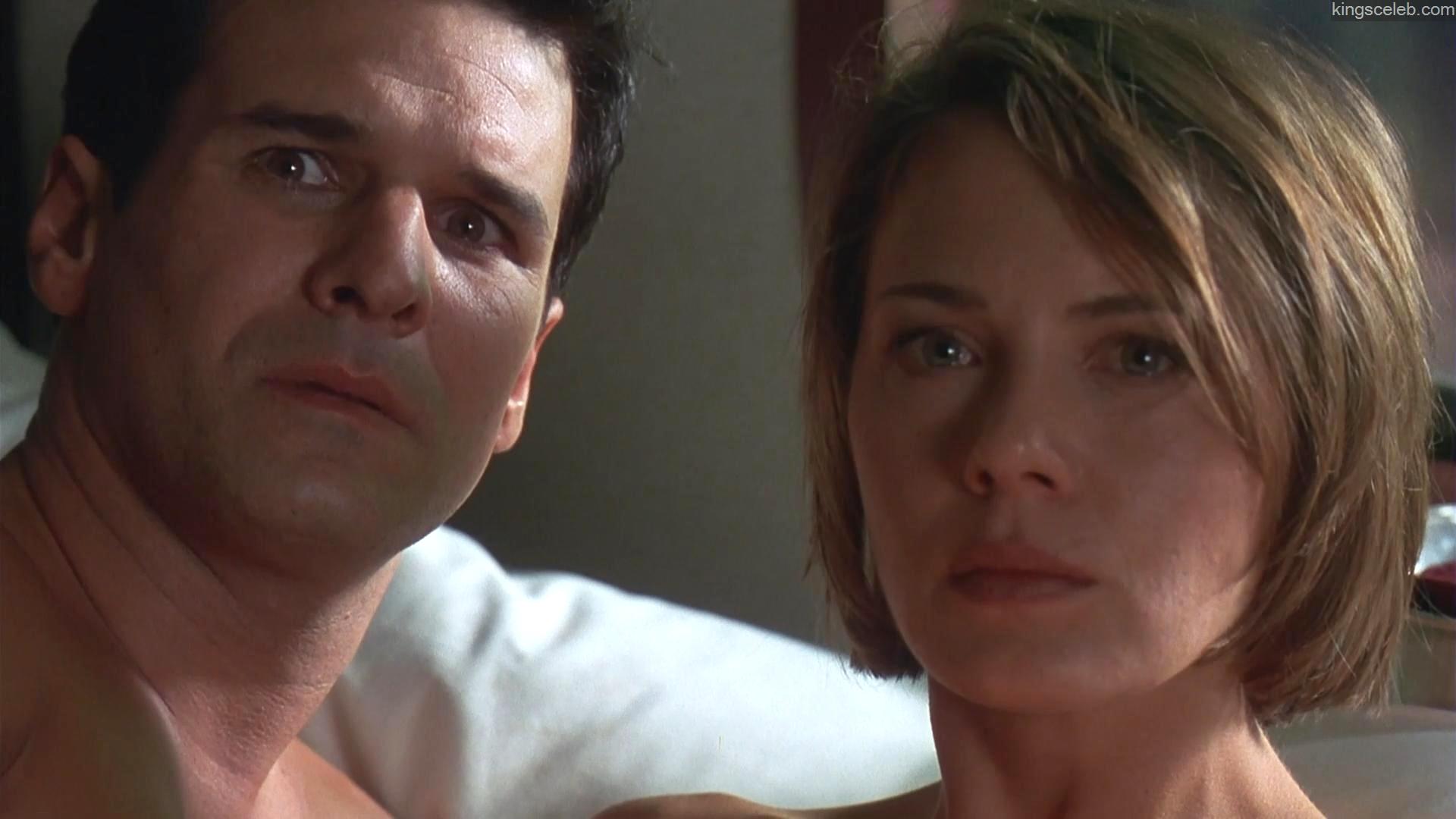 The thing about Under Siege 2 that separates it from the original is the action. This film gives Seagal’s Ryback a lot more to do, a lot more ground to cover, and a far more difficult terrain in which to operate. At least in Under Siege he kinda knew his way around the massive battleship upon which the film was set. Here, a fast moving train with narrow access points, limited room to move, and persistent technological disadvantages – the “Dark Territory” of the title refers to a large stretch of canyons and tunnels through which the train speeds, where there is no communications from the outside world.. meaning no phones, no fax, no nothing – offer a new twist on the Die Hard model, with Seagal forced to move from one end of the train to the other using a variety of weapons, explosives, and other duplicitous MacGuyver moments to ensure he gets the one-up on the bad guys. Geoff Murphy, a New Zealand filmmaker who was coming off the success of Young Guns II and a critically successful outpout on HBO, took the reins to deliver a film of suspenseful pacing, less contrived kills and plot twists (although there are a couple of genuine eye-roll moments throughout) and a more energetic, high stakes editorial style than the original film. Some of the green screen effects and rotoscope rear projection elements do look a little wonky by today’s standards but generally the film holds up spectacularly well. Especially a jarring and hugely effective train crash sequence in the film’s climax, a mixture of sublime model work, practical effects and good ol’ Hollywood magic. If nothing else, Under Siege 2 is predictably crowd pleasing in the most shallow, easily stage-managed manner possible. Accompanying the bullets, blood and rapidly rising body count is a majestic, militaristic Basil Poledouris score that evokes patriotism and engages a general kick-ass emotional state in any viewer; by the end, you’re left wondering where there’s an American flag you can go and salute. 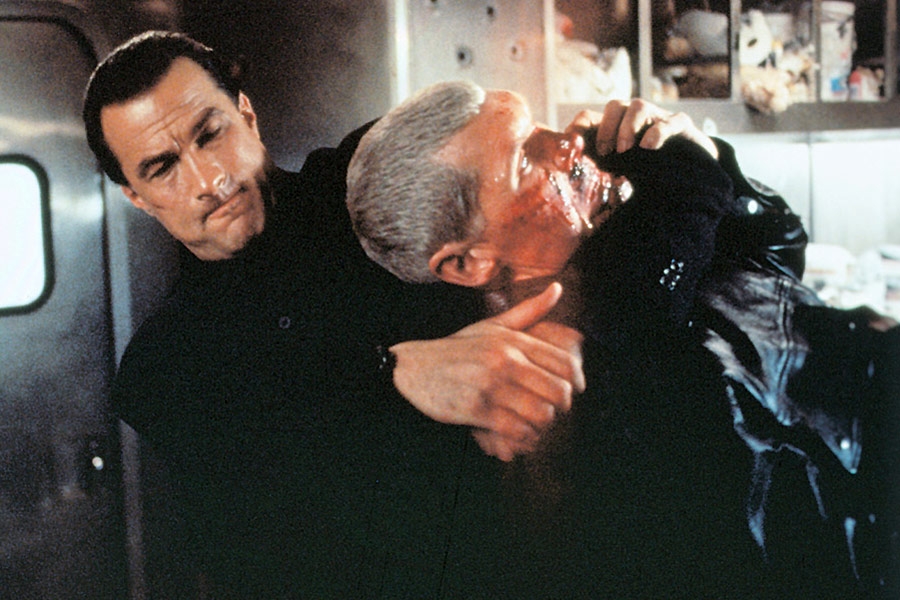 Under Siege 2: Dark Territory is a mindless, forgettable Steven Seagal vehicle that works its ass off trying to ensure the supporting characters do most of the heavy lifting here. Seagal is a charisma vacuum at the best of times and this isn’t even the best of times, so the other players have to rise to the challenge of making this thing watchable, if not entirely enjoyable. At a laughable B-movie level there’s a lot of satisfying cheese on screen here, as bad guys chew the scenery, good guys frown and pontificate the chances of survival, and Seagal shoots, stabs, crushes, defenestrates, slashes and strangles his way through yet another legion of asshole terrorists all whilst dodging bullets and convincing zingers as only he can. It’s all entirely formulaic, a touch chintzy, and altogether hilariously bad but it is never anything other than pure escapist enjoyment.