Jack Nicholson headlines this classic noir entry from then-rising star director Roman Polanski, best known to American audiences for Rosemary’s Baby (1968) and the controversially violent version of Macbeth, released in 1971. Chinatown, which would co-star Faye Dunaway and John Huston in supporting roles, landed eleven Academy Award nominations, including Best Picture (losing to The Godfather Part II), Director, Actor and Actress, and Jerry Goldsmith’s Score, but it would only win a single one – Robert Towne for the Original Screenplay category – although the film has reached the status of a classic in the decades since its release in 1974. The film is famous for Nicholson’s hard-bitten portrayal of Los Angeles-based Private Investigator Jake Gittes, as well as the classic line “forget it Jake, it’s Chinatown” concluding the movie’s jarring final scene; the film has long been a blind spot in my film appreciation, and I expected something that would entertain me in a manner befitting other award-winning films of the era. It’s surprising to me that I found Chinatown really, really disappointing. The varied parts that went into making the film – Polanski as director, Nicholson as star, and screenwriter Robert Towne, who wrote the first two Mission: Impossible films and directed Tequila Sunrise, among other things – are all exemplary elements in their respective fields, and the obvious prestige with which the film is presented is immediately apparent thanks to stellar production and costume design. Yet, for a variety of reasons, I didn’t like the film. At all.

The story revolves around a water crisis in Los Angeles in the 1930’s – there’s a drought on, and the company responsible for supplying the rapidly growing city has everyone on rations, whilst ostensibly refusing to send any water across the valley to local fruit growers desperate for sustenance for their parched crops. After being recruited by a mysterious woman (Diane Ladd) to spy on the infidelity of the water company’s top man, Hollis Mulwray (Darrel Zwerling), local gumshoe Jake Gittes (Nicholson) tracks down the man’s real wife, Evelyn Mulwray (Faye Dunaway) in order to find out why Hollis not only was having an affair but also why he was killed: he is found supposedly drowned in one of his own water pipes along a deserted aqueduct. Jake even questions Evelyn’s powerful father, Noah Cross (John Huston) about his relationship with his daughter, while a hard-nosed police detective (and former colleague of Jakes) follows his own line of inquiry as the body-count starts to mount. The case becomes even more confusing when a mysterious young woman (Belinda Palmer) appears on the scene with a tragic and shocking past. 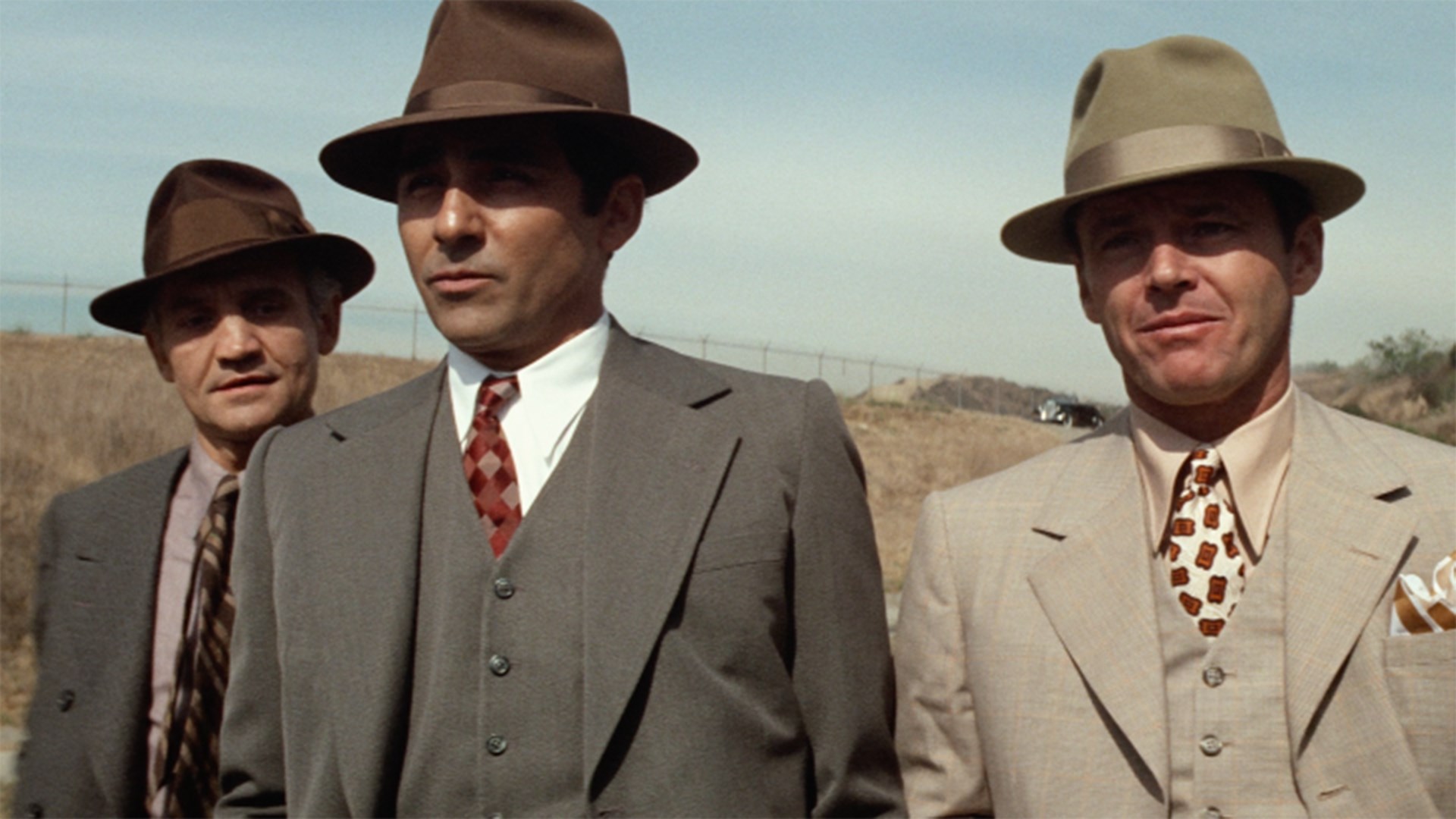 I found Chinatown to be an ugly, ice-cold film, a desolately unappealing affair of malignancy despite compelling performances from both Nicholson, in top form, and Fay Dunaway, who…er, shows her top form. I understand that noir films such as this are designed that way on purpose, and should be approached recognising this style and its effect on the audience, but the frosty, insouciant nature of Chinatown’s shocking twists make appreciating this film, for me at least, an intransigent accomplishment. This is less to do with Towne’s screenplay, which bubbles along with the same heat as the Californian bleached landscape, and the laconically garrulous Jake Gittes epitomises the swaggering insolence of any great noir detective, a guy who espouses indifference but for whom Doing The Right Thing is obviously a significant character flaw, but rather the distance with which Polanksi holds the story away from the audience. At no point are you really invited into the film, but rather have to watch from afar, removed from the events transpiring by a sense of remoteness from the storytelling. The dialogue is peppered with terrific cynicism, with Towne’s pragmatic approach to the period, locale and overarching backdrop of a Los Angeles water crisis epitomising the multicultural immigratory soup of early 20th Century America. He percolates the disparate social conflicts with an undercurrent of machismo, soliciting Gittes as the flawed but stoic nature of United States anti-authoritarianism writ large. In the face of this corpulent demagoguery, Chinatown elicits a feeling of bitter isolation, a malaise of corruption and belligerence, not to mention a remarkably unsavoury concluding act that will leave your jaw agape.

Shock tactics are nothing new from Roman Polanski, who directed the classic horror film Rosemary’s Baby to considerable acclaim. The fact that Chinatown has a last-act revelation that kicks the breath out of you plays into a similar trope he encouraged in his earlier film, and for what it’s worth Chinatown’s impact because of this plot-twist is certainly right up there with other, Sixth Sense, The Mist and Oldboy-style punches. Whether it’s worth the journey, though, is the question, and for me it was such a difficult film to really get into that I can hardly claim to have enjoyed it. The mixture of violence, sexual chemistry and illicit goings-on would normally invite positive descriptors, but I found the violence too antiseptic, the sexual chemistry completely absent, and the illicit goings-on too uneven to find an accommodating appreciation of the film’s declarative obnoxiousness. Part of the appeal of Chinatown is the inclusion of Faye Dunaway, a woman I’ve found generally to be the opposite of alluring or persuasive, and I thought the on-screen relationship between her and Nicholson to be absent any real human emotion or lustful yearnings. John Huston, however, is always good to watch, and his work here is again informative to the man’s legendary talent. As Noah Cross he’s portrayed as almost a Godfather figurehead, a philanthropic benevolence mixed with slimy  bureaucratic headstrongness. 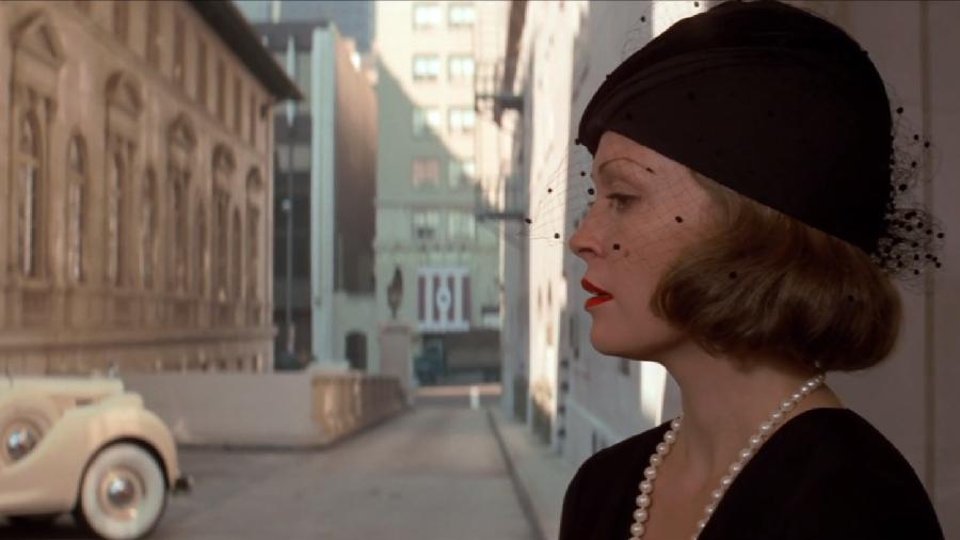 Polanski’s direction feels quite vertiginous at times, as if the whole thing is going to shift into some crazy off-the-wall nonsense (it never does, perhaps to its detriment), with elements of the same psychedelic lunacy Rosemary’s Baby developed once poor Mia Farrow figured out something was wrong. The film’s cinematography boasts splendid 70’s-specific turd-brown hues and a dusky, soft aesthetic in keeping with the period – Chinatown was a contemporary of the New Hollywood school of filmmaking of the decade, ushering in evocative, violent, more sexually explicit content to an audience wrangling with civil rights, flower power and Vietnam, with Chinatown seemingly voicing this angry, discontented time as a way to psychoanalyse the American mindset.  Although set in the halcyon 30’s, with Los Angeles sitting as the center of global filmmaking, the story’s bespoke specificity to its location may not engender any empathy from international audiences, but I get the distinct feeling that Polanski, through Jake Gittes’ cynical eyes, is reprimanding corporate America not to screw with the little people. The photography on Chinatown is terrific (Scarface DOP John Alonzo snagging an Oscar nomination for his work here), despite the dour story and characters inhabiting it.

It’s not that I’m unfamiliar with, or unappreciative of, the noir subgenre, nor of Polanski’s films in particular (The Pianist is a masterpiece), but gosh Chinatown rubbed me the wrong way. I continually felt like I was being ambushed and mistreated, despite the superb on-screen cast, the wonderful production design and technical work, and Robert Towne’s scabrous screenplay. I wanted to feel like I understood at least one of the characters here, or approach the story with any sense of empathy, but Chinatown kept me at a distance. Maybe it’s Polanski’s style, his artful raggedness in compiling his movies almost as series’ of vignettes, that has put me off a bit, but even then I can usually discern the artistry within and give it a pass. I didn’t like Chinatown at all, really, despite Nicholson’s restrained work and Dunaway’s doe-eyed compliance setting the stage. Some might consider it one of Hollywood’s greatest ever films (it consistently ranks inside most top 10 lists in this regard) but I’m obviously an outlier to this; Chinatown is indifferent to emotion, savage with character turns, and lacks grace in its darkest moments, and I found it far too unconquerable to access to find it entertaining in any sense.