Francis Ford Coppola’s third film in his epic Godfather saga has become something of a cinematic oddity in recent decades, often cited as the cause célèbre of sequels suffering from diminishing returns, and routinely derided as the poor second cousin of the Best Picture-winning films that preceded it. Coppola described the film in legacy interviews as an “epilogue” to both The Godfather and The Godfather Part II, and in reappraising the film today it’s easy to see that this project was less a creative firestorm and more an allegorical afterthought. Lacking both the scintillating period aesthetic of previous films, and mixing in a baffling Vatican-centric subplot to keep the various machinations in play, The Godfather Part III suffers from an increasingly obvious case of reuniting the franchise players for one last swing for the fences without really divesting disinterest in making it – reputedly, Paramount had offered Coppola a budget to make a third film, which was only accepted following the legendary misfire of One From The Heart fractured the director’s relationship with the studio, and this over-the-barrel-lifeline rescue package certainly feels like the epilogue it was labelled as.

It should be noted that this review is based upon the 1990 theatrical cut of the film. Coppola recut the film entirely for the 2020 release of The Godfather Coda: The Death of Michael Corleone, which is yet to be viewed at the time of publishing this review. The Coda release is currently streaming on Netflix. Original release prints of the film are still available on BluRay and some streaming services globally. 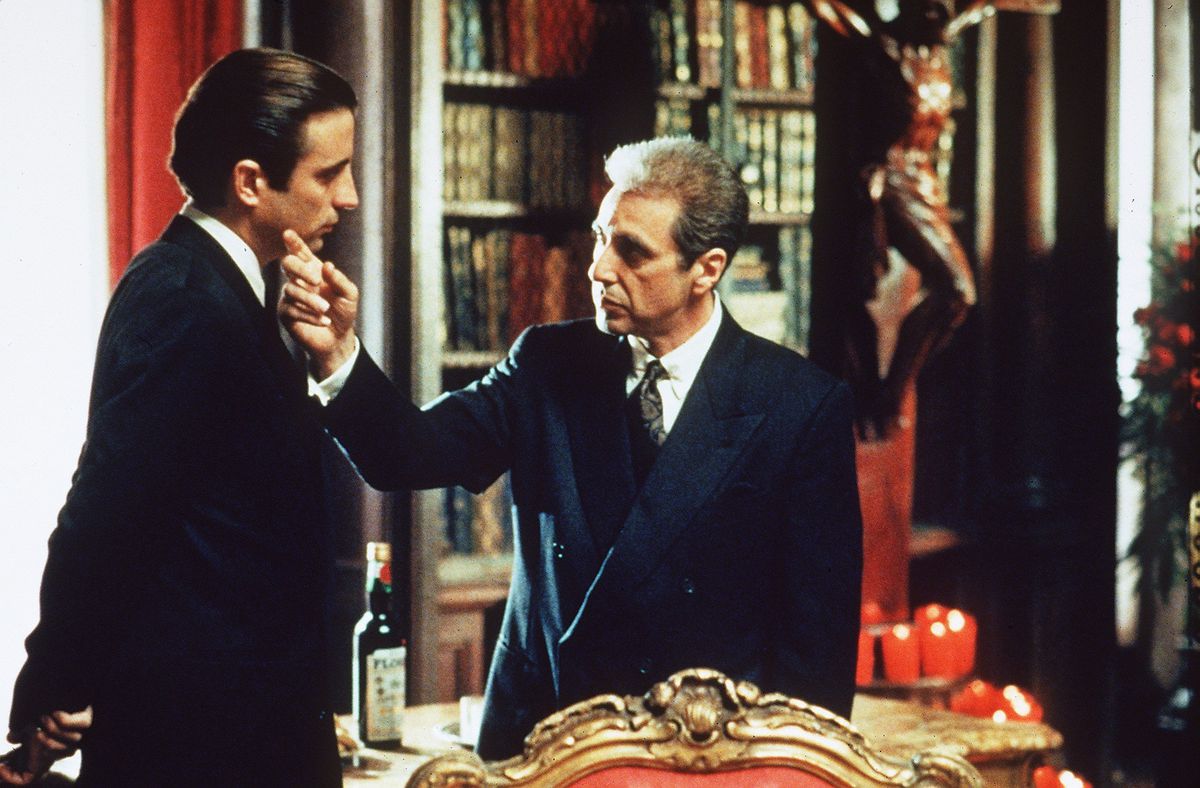 It’s the late 1970’s, and ageing Godfather Michael Corleone (Al Pacino) is suffering from inextinguishable guilt over the death of his brother Fredo (as seen in The Godfather Part II) years earlier. A devout Catholic, Michael has spent the time between then and now moving the family business into legitimate enterprises, and away from organised crime. He donates millions of dollars to charities, in particular a sizeable chunk to the Vatican. His son, Anthony (Franc D’Ambrosio) is now a successful opera singer, while his daughter, Mary (Sofia Coppola) is the face of his philanthropic organisations. His ex wife Kay (Diane Keaton) has remarried, although Michael still carries a torch for her. Michael’s upstart and petulant nephew Vincent (Andy Garcia) comes to work for the family after a falling out with New York-based gangster Joey Zasa (Joe Mantegna), and immediately falls hard for Mary, much to Michael’s chagrin. Of course, Michael still has toes to his former underworld life, notably the figure of Don Altobello (Eli Wallach), which whom he reminisces over the old days when things seemed a lot simpler. The Vatican bank, led by Archbishop  Gilday (Donal Donnelly) and abetted by Swiss banking financier Frederick Keinszig (Helmut Berger), seek to bring the Corleone into the fold with a duplicitous swindle of over half a billion dollars, an offering by Michael from the sale of all his Vegas casinos. Michael is also a target for assassination (Mario Donatone), with shadowy underworld figures seeking revenge constantly, leaving the former Mafia Don with little option but to strike back. Make no mistake: The Godfather Part III deserved its Best Picture nomination. It is a terrific film, especially viewed in tandem with its ancestors, although one could argue it doesn’t stand on its own legs as much as Part II did from the original. The story feels a little too lightweight, having moved Michael away from the violent immediacy of controlling the Corleone family and into a patriarchal, tragic figure; Pacino is too strong an actor not to give it his all and rise to the occasion of making this character swing as potent as he does, but Coppola and Puzo’s screenplay jettisons protracted time in his presence in order to spend a lot more time trying to pass the baton to Oscar-nominated Andy Garcia’s hypnotically engaging Vince. Beefed-up roles to Talia Shire’s Connie, Michael sister, and a terrific Eli Wallach, as the frail but well-respected Don Altobello, ease out the film’s lengthy running time – this is an instance where a film could easily be trimmed down to maintain interest, or at least lose several minutes of ancillary plotting to move things along – but I found the film’s lethargic pace and ripened sense of nostalgia for the past to limit the epic-ness of what Coppola carefully constructs. The sense of closure Part III offers is redolent of a final chapter, although as I have already alluded to, the story’s addled plot and weird offshoot narrative feels more like an expanded back page note than a full blooded investment. Part III is entirely a story of melancholic redemption. From the opening party sequence (which echoes how both previous films opened) to the climactic, all-too-tragic opera house steps violence, the third Godfather film is a centered around Michael Corleone attempting to atone for his past sins. The old “I try to get out, but they drag me back in” line isn’t referenced once here (a mistake, in my humble opinion) but looms over the film like a portent of doom, and as Michael starts to feel his family slipping away from his control desperation starts to kick in. I guess the idea of redemptive contrition makes sense if you factor in the rampant Catholicism and Vatican-centric subplots contained in the story, awkwardly using the sudden death of Pope John Paul I as a story crutch does jar somewhat. The arc of redemption isn’t qualified clearly enough by Coppola’s measured direction, although it is there in a jumble, unfortunately, if you care to seek it out. The burden of guilt Michael carries over Fredo’s death is cathartic enough to prompt a tearful admission from the younger brother at one stage, and I would posit that this is perhaps the whole point of the entire trilogy – that crime doesn’t pay, and will eat you alive if you persist in it. It helps that Pacino delivers one of his great performances in this moment, a shattered man coming to terms with what his life has led him to. At one point Michael even tries to reconcile with Kay, only to fail at the last hurdle. I appreciated that Coppola and Puzo tried to round out the deleterious nature of dealing in death and crime, and showcase the toll it can take, but somehow the message seems garbled and confused, as if they don’t quite know where to take their leading character. The film’s memorable final two shots, in which Michael sits, alone in his Sicilian villa, are stark and shocking for their perfunctory nature, especially considering the tragic scene that played out merely moments earlier; I hated the way this film ended, as unsatisfying as possible and lacking a sense of genuine regret or conviction. I expect it was intended to work as a reprise of Brando’s famous death scene in the first film, only it lacks that sequence’s grace and mournful tone. 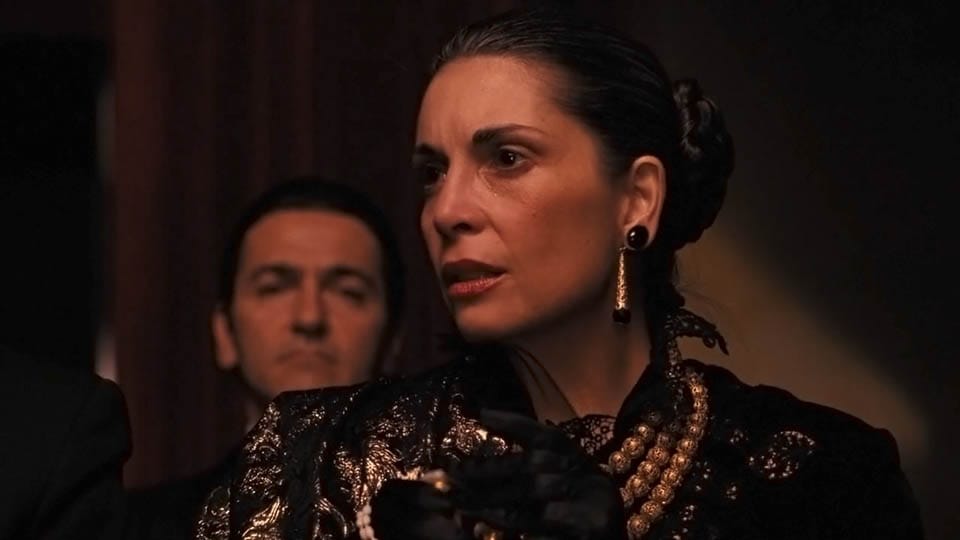 A lot of criticism was (and still is) levelled at Francis Ford Coppola for committing an almost unforgivable sin: casting his own daughter in a significant leading role, that of Mary, Michael’s beautiful daughter. Nepotism is a taboo catchphrase in Hollywood but everyone knows it happens, only Coppola brought it to the surface in a manner some found unpalatable. That poor Sophia isn’t an actress is all the more evident, with her wooden delivery and clumsy performance style – she is radiantly beautiful, however, which mitigates a lot of the awkwardness of watching her play the part. I want to go on record as saying she’s not dreadful on-screen, and that I’ve certainly seen worse, but as with most things involving Part III her casting in this role certainly feels like Coppola was just doing it to screw with the studio. The film sprinkles some solid supporting cast members in as well, namely Joe Mantegna as the film’s odious archvillain Joey Zasa, Bridget Fonda as a one-time fling for Vince, Richard Bright as Michael’s current leading henchman Al Neri, Diane Keaton as Kay, and an almost in-disguise George Hamilton as Michael’s latest consiglieri, BJ Harrison. It’s wonderful to sit back and watch a film in which the performances almost all seem effortless, from the leads down to the background players, and Part III of this fascinating trilogy is no exception. Wisely, Coppola saw his daughter wasn’t capably of delivering a performance equal to that of her co-stars, so he appears to have edited around her performative deficiencies as much as humanly possible. One suspects there is a lot of material he wrote for the role that never made it to the final cut. 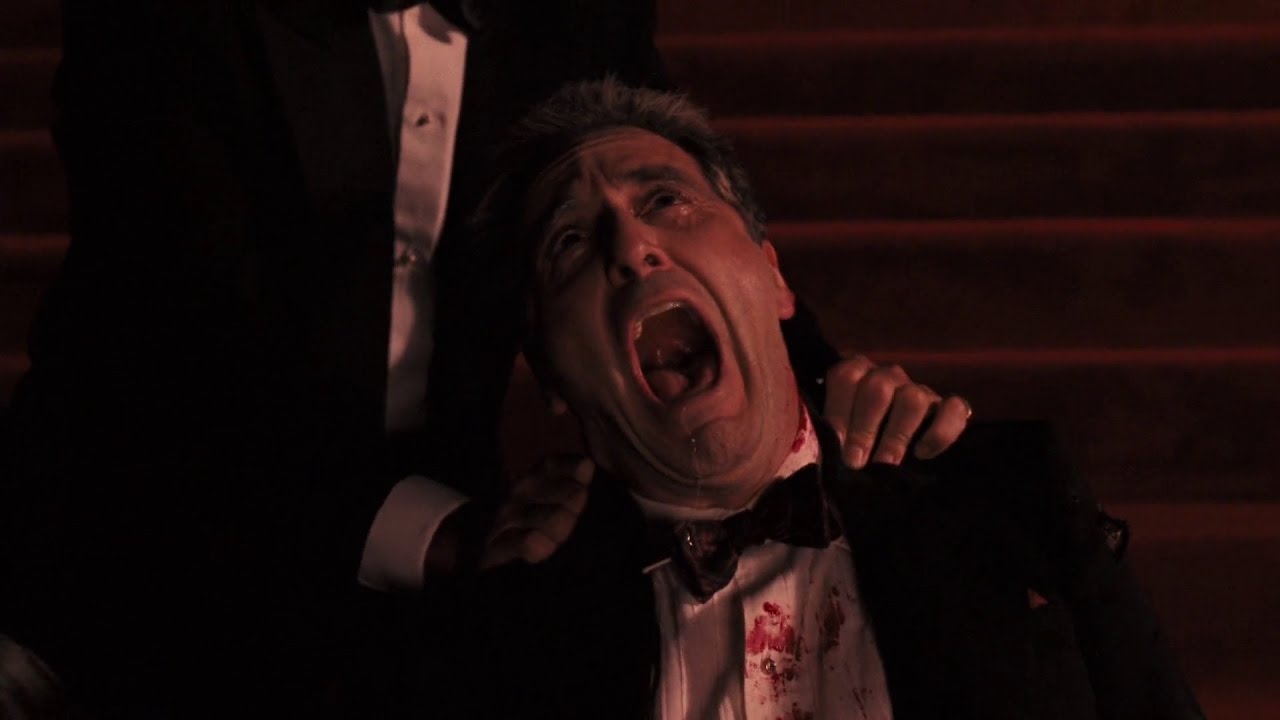 The whole “getting the band back together” feeling of Part III never really leaves. Cinematographer Gordon Willis returned to complete his triumphant masterpiece of photographing this story, Nina Rota provided ancillary musical score to Carmine Coppola’s less trenchant themes, and Coppola’s utilisation of ageing cast members (and some wonky old-age makeup) remains a smirk-worthy aspect to the otherwise prestigious aspects of the film. The lavish location shooting, the attempted widescreen storytelling stringing multiple plot threads with such ease, the production design of both the costumes and period details, are eminently enjoyable and go a long, long way to papering over the narrative missteps Puzo and Coppola create for themselves. An argument could be made that Part III is a little too late to the party, and offers an unsatisfying overall completion to what was until then a masterful representation of Cosa Nostra life during the 20th Century, but taking it in as simply an addendum to two sublime movies it’s not wholly without merit.