The Academy Award race for Best Picture in 2006 is perhaps best remembered for the huge anticipation for industry legend Martin Scorsese finally, almost unbelievably, snatching the Best Director Oscar for the very first time. The man has made some of the most iconic films in all of film history – Raging Bull, Taxi Driver, Goodfellas and Casino to name but a small few – and by the time The Departed came along and set cinemas ablaze with its incendiary crime-thriller story, it was almost fait accompli that the success of this film would finally signal that Scorsese might be, at long last, granted the award more or less as a career accomplishment if for nothing else. The Departed, which would be announced as the Best Picture of 2006, isn’t just a simple case of Scorsese phoning it in to grab an Oscar nomination, however. This is a full-throated hand-grenade of greatness, a masterwork from a director with more than his fair share of them, delivering a rapacious story of underbelly criminality, dishonour, violence and corruption, held together by one of the great all-time performances by both Leonardo DiCaprio and Matt Damon in the same film, a truly sublime supporting cast, and directed with astounding ferocity by one of cinema’s most astute and complete filmmakers. Rookie Boston police officer Colin Sullivan (Matt Damon) joins the force with the intent on becoming a mole for local Irish Mob boss Frank Costello (Jack Nicholson). As both the BPD and FBI (led by Captain Ellerby, played by a terrific Alec Baldwin) attempt to build a case around Costello’s illicit activities, Captain McQueenan (Martin Sheen) and vociferously vulgar Staff Sergeant Dignam (Mark Wahlberg, in his Oscar-nominated role) recruit cadet dropout Billy Costigan Jr (Leonardo DiCaprio) to go undercover and infiltrate Costello’s gang, feeding them information from the inside. Initially gaining Costello’s trust, such as it is, Costigan is placed in extreme jeopardy as Sullivan’s attempts to weed out the rat, and inform back to Costello, leads to a clash of loyalties and a violent, bloody confrontation. 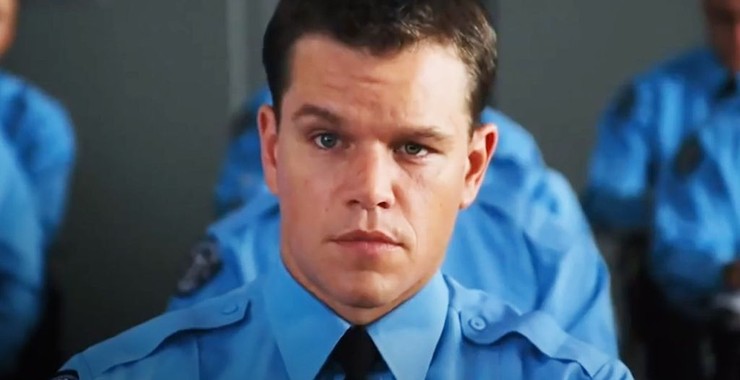 Sometimes the Oscar for Best Picture is handed out to films that don’t really warrant the blessing of historical legacy (Crash, I’m looking at you!), and often for films that exist in a moment of time that, when looking  back nostalgically, often don’t stand the test of time. I would suggest that many recent Best Picture winners might lack the cultural cache of, say, a Lawrence Of Arabia or a Gladiator, cemented forever in the pop-culture landscape that redefine not just cinema but the way audiences view cinema. The Departed is the exception to this increasingly banal roster of post-millennial awardees, remaining inside the top 3 winners of the award since Gladiator took the crown back in 2000. It is bested maybe by only Return of The King when it comes to Best Picture winners in the last 20 years. In the nearly two decades since it took out the top gong, I would argue that very few films in that time could hold a candle to the virtuosity and ferocity of this scorching crime thriller and dramatic one-two punch that quite literally will leave you breathless. 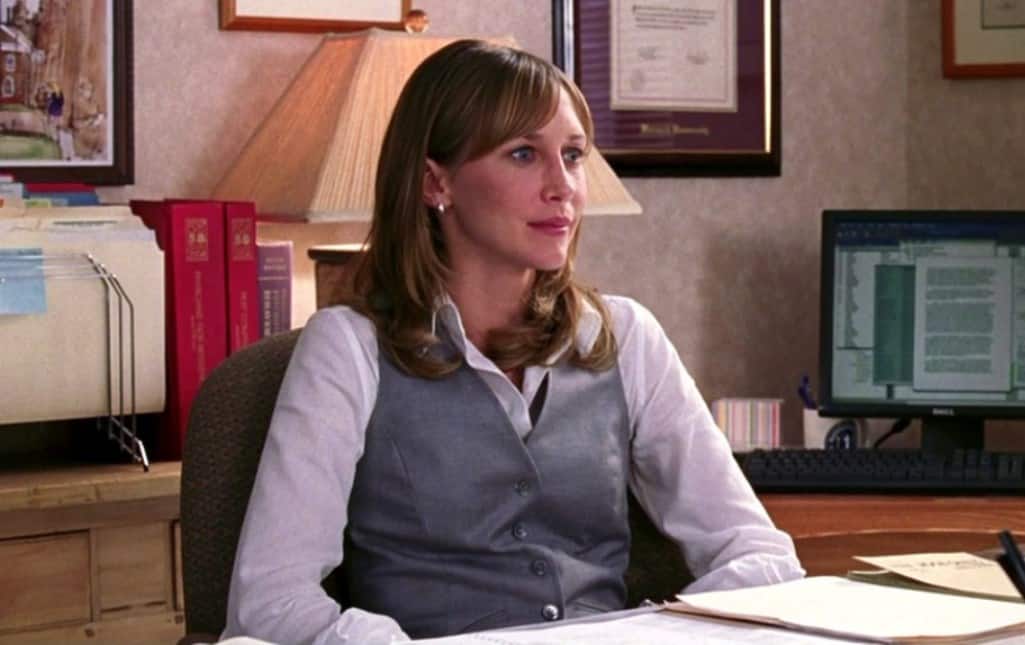 Written by Willian Monahan, who the year prior had scribed Ridley Scott’s Kingdom Of Heaven, and who would go on to have credits on Body of Lies (another DiCaprio film) in 2008, and Rupert Wyatt’s 2014 project The Gambler (which starred Mark Wahlberg), The Departed is a remake of cult-classic Hong Kong action film Infernal Affairs (2002) and flicks the setting from the Chinese Triad to the Irish mafia in Boston, recasts the central villain as a riff on legendary FBI informant Whitey Bulger (the character who would be played by Jack Nicholson), and treads very very heavily into Goodfellas territory with its brutal and unflinching violence. It’s a film about moral quandary and fractured loyalty, questionable ethics and corruption run amok, perfectly Scorsese-ian in every way given the director’s love-affair with the identity of criminal honour and humanising the American myth. The dialogue, the crackling monologues by both Nicholson and Wahlberg at various points through the movie, is entirely riven in pulp lasciviousness, a smarmy, seductive allure to the dark side set within scabrous underbelly of an all-too recent Boston landscape, and Monahan’s ability to weave the rising pulse of imminent discovery (of both Damon’s white-hot police mole, and DiCaprio’s sweaty, hoarse-throated Costigan) with the beautiful semi-empathy with the scenarios depicted within you almost – almost – feel sorry for these people. 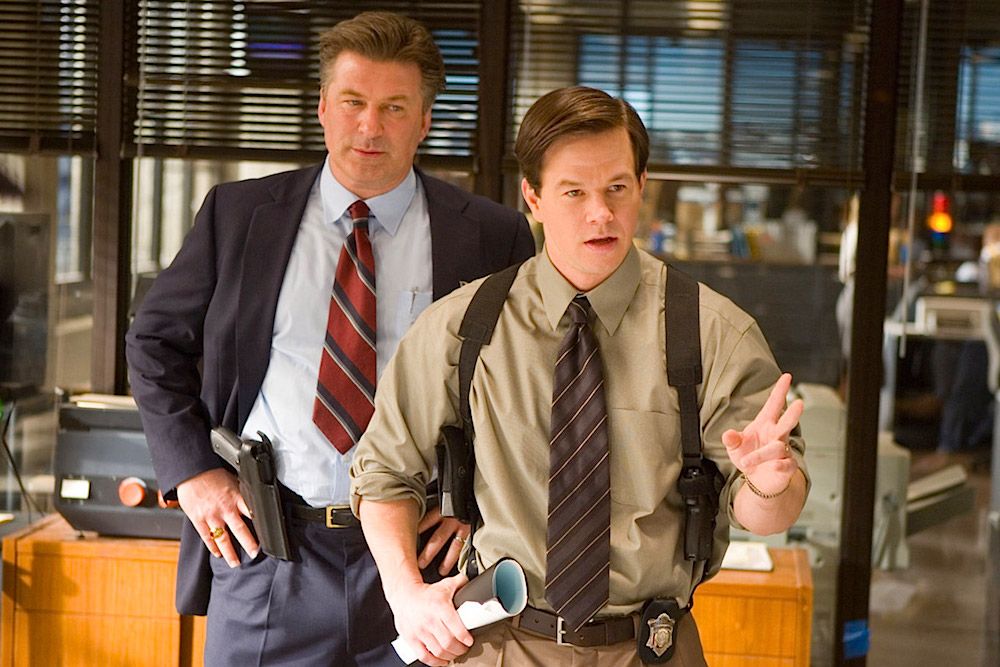 The one-two punch of a pair of all-timer performances from Damon, who has never been better, and DiCaprio, who completely inhabits the role of Costigan here, unlike his work in Gangs of New York where you could “see” him a-c-t-i-n-g, is the core strength of the film. Matt Damon’s frantic, tragic work as the dour Colin Sullivan, who perceives Frank Costello as the father he never had and who has an undying loyalty to the older gangster, is simply terrific, while DiCaprio’s bug-eyed and at times cheeky work as Costigan, often going up against Jack Nicholson as his on-screen performative sparring partner, is truly astonishing. I’m often torn about DiCaprio. I think he’s a fine actor generally, and when he sets himself a role with heft and meaning he really tries to inhabit the performance, often with varying degrees of success. I think the role of Billy Costigan suits his ability, and the actor really knocks it out of the part here, jittery and wide-eyed wondering when he’ll be caught out and dropped by Costello or his henchman Frenchie, played by a gruff Ray Winstone. I believed he was Costigan through and through, unlike many of his other performances where it just feels like “oh, it’s Character X as imagined by Leonardo DiCaprio” the whole time. I’m honestly surprised DiCaprio found himself nominated for Blood Diamond instead, rather than this film. I think he’s better here. And I frickin’ loved Blood Diamond. 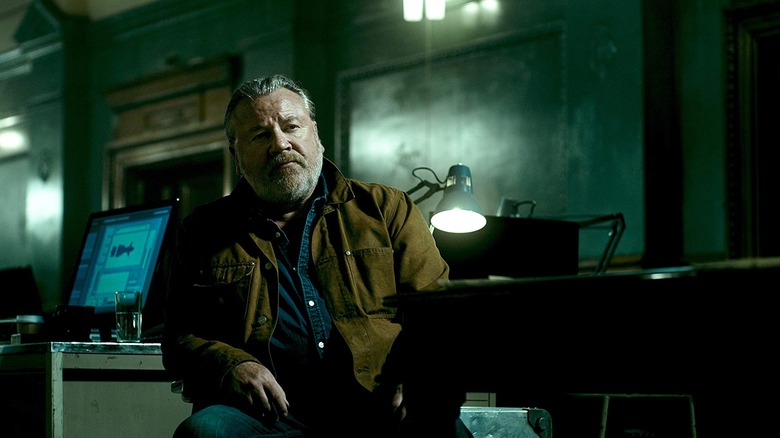 Backing up this truly remarkable duo is the inestimable talent of Jack Nicholson. Sometimes Nicholson phones it in (especially in many of his later roles) and just plays himself having a blast on-screen. With The Departed, you can feel Nicholson investing in the insanity and madness of the role of Frank Costello, a man for whom murder and crime are genetically imprinted and who understands that with great power often comes a great fall. Nicholson’s menacing, malevolent turn isn’t flashy, nor is it particularly outside of the actor’s ability to charm the pants of the viewer by being the most deliciously evil bastard he can possibly be; Frank Costello is a man of simplicity and centered focus, and Nicholson’s suave, hissed line delivery and gangster-swagger engender a feeling of impending doom whenever he’s on the screen. When he puts himself into the role, and commits, Nicholson is a hypnotic, mesmerising force to be reckoned with. Here, he’s at his Oscar-winning best. The fact he wasn’t even nominated for an Academy Award shows just how strong the field that year was – he was nominated for a lot of other awards that season, but still – with Mark Wahlberg the only one out of this amazing cast to garner a nod.

Wahlberg is indeed terrific amidst a throng of equally compelling and excellent supporting players. Not a single bum note or miscast actor takes away from Scorsese’s work here. Vera Farmiga plays the love interest of Matt Damon’s character, and latterly DiCaprio’s, as a local psychoanalyst who mines the minds of the city’s best and brightest, and she offers formidable resistance to the idea she’s just there to balance out the sausage-fest around her. Alec Baldwin is hilarious and magnificent in full cock-clutching glory as the commander of the Boston Police Department’s Special Investigation Unit, hounding Costello and his gang into every dark crevice and abyss he needs to to see the job done. It was a surprise to see Anthony Anderson, usually stuck in loudmouth sidekick roles elsewhere, get to play it remarkably straight as one of Sullivan’s fellow academy rookies, as with James Badge Dale in a minor (but crucial) role. Spotting Kevin Corrigan, Mark Rolston and David O’Hara in supporting roles for Costello’s gang was also among the film’s many, many highlights. Everyone here gets a moment to shine, even in the smallest role, and the balancing act to create audience attachment to even the minor players is a treasure among treasures in The Departed’s delivery.

Scorsese didn’t win a career Oscar for directing The Departed. He won it for directing the absolute shit out of the movie. Look, everyone loved Taxi Driver and Raging Bull and Goodfellas and The Wolf Of Wall Street and hell, even The Irishman for a variety of reasons. But you stack the majority of Scorsese’s latter work up against The Departed and most of them look like also-rans. This film is an absolute masterpiece of production design, cinematography, Thelma Schoonmaker’s editing (she won her third Oscar in this category for this film), and execution, overseen by an undisputed master of the artform. The angles, the focus, the lighting and use of sound, as well as the sense of pacing and subtle wit within the subtext, married against this script and those actors, is pure on-screen joy as far as the eye can see. There is quite simply not a single thing wrong with how Scorsese directs this, from the softly-spoken opening montages between Sullivan and Costigan training for their various futures in crime or law and order, to the violent bloodbath climaxing this operatic symphony of despair, insomuch as I would declare this to be a rare example of The Perfect Movie. Take one piece out, the rest might crumble. Move one moment or one action within the story’s framework and everything else becomes meaningless. The camera never stops moving, your eye is drawn to exactly the place on-screen Scorsese demands it, and accompanying the visuals is Howard Shore’s eternally melancholy, irresistible score, maximising the effect this combination has on the audience. Watching The Departed is an effortless thing, and very few films make watching them such engaging, such enveloping experiences.

At times confronting, at times maddeningly impossible to believe it exists on the screen, and with a final act that will drag the breath from your body despite knowing morally these people deserve what’s coming to them, The Departed is not only one of the best Best Picture winners of all time, I would suggest that it is easily one of the great American Films ever made, standing alongside Scorsese’s own Goodfellas and Raging Bull as a bona fide masterpiece in every single way. Suffocatingly tense at times, led by towering performances from the top down, and produced with such tenacity and visual ferocity, The Departed is essential Hollywood cinema and a must-see piece of motion picture art.