Profane, blasphemous, idiosyncratic, raucous; Alejandro Jodorowsky’s cult classic The Holy Mountain is a feast for the senses. Exactly which senses, I’m still not quite sure, however. As an exercise in pure visual film language The Holy Mountain is a superbly stylish, instantly provocative mediation – or, dare I say it, repudiation – of scatological religious iconography that will appal many, and delight some. Filled with some of the most bizarre and memorable frames of film ever committed to the artform, The Holy Mountain is not a film for the weak-willed or puritanical of heart, for the film contravenes almost every known narrative cliché in its quest to dissemble the spiritual awakenings of the day, and offer a semi-satirical look at everything from consumerism, capitalism, mysticism and Zoroastrianism, replete with near constant nudity and a profound sense of the sublimely ridiculous. The Holy Mountain is like Monty Python’s Life of Brian without the jokes. 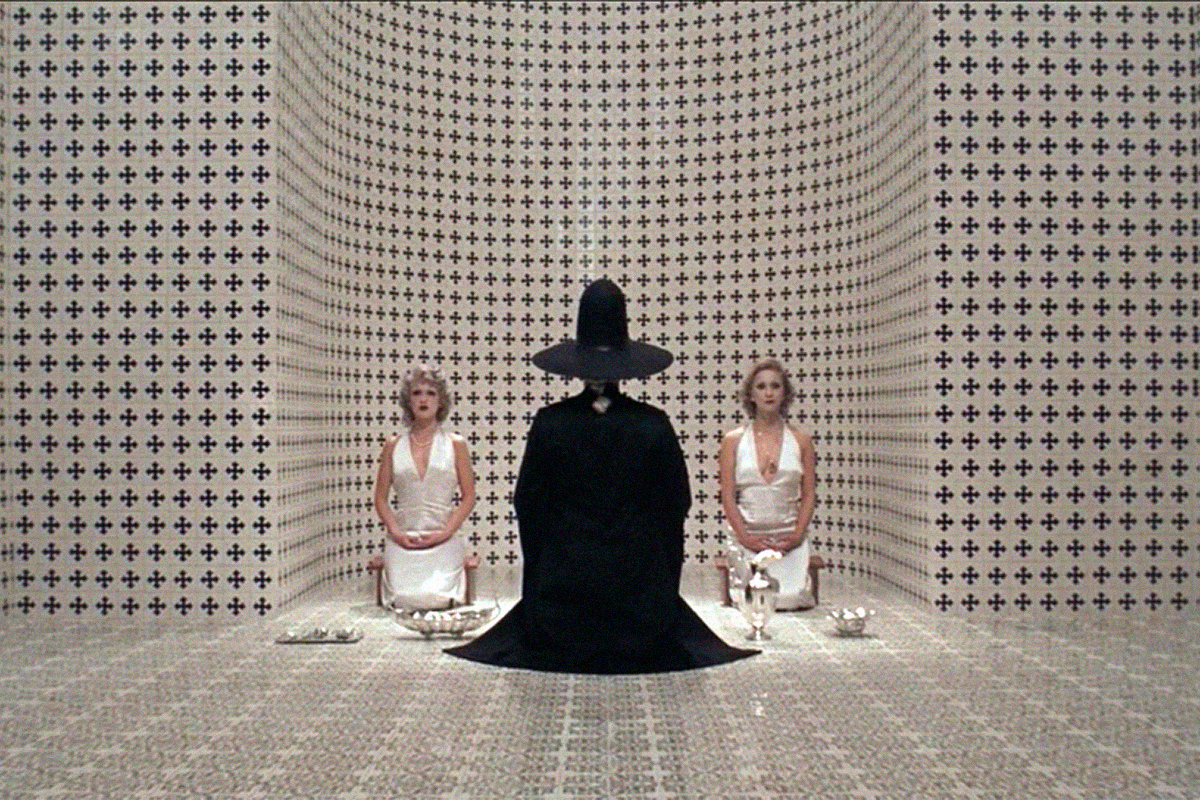 A mysterious Alchemist (Jodorowsky) leads a Christ-like thief (Horacio Salinas) and a group of nine acolytes – named after different deities – on a quest to locate a mystical holy mountain and achieve spiritual enlightenment. Along the way, they are followed by a prostitute (Ana de Sade) and her pet chimpanzee, and a legless, armless dwarf (Bailio Gonzalez) and encounter many strange and puzzling scenarios on their journey.

It’s fair to say that The Holy Mountain is a film in which style clearly takes pride of place over substance. Jodorowsky, who stars, directs, writes, edits and performs multiple aspects of production design as well as co-writing some of the music, reportedly edited out as much of the filmed dialogue as he could prior to general release in order to find the film’s spiritual center (and make it less straightforward for the viewer), and as such – maybe inadvertently – crafted a film so visually compelling, and jaw dropping in its visceral sensibility, you can’t help but be swept up in it all. One might argue that a lack of straightforward narrative makes for difficult general viewing, but I would argue that The Holy Mountain isn’t a film you sit down and watch for the story, you watch it as a movie experience. I have to admit, the sight of a man’s taint being washed by a nude, tattooed African woman wasn’t one I was wholly prepared for, and there are far too many penises and testicles on the screen throughout for my liking, but there’s a whimsy to it all, a sense of jarring iconography seeping from every hyper-coloured pore of this film’s craftsmanship, you can’t help but admire it as the journeyman director plumbs the depths of obscenity and cruelty, as well as beauty and the sacrilegious in order to elicit some kind of response from the viewer. To be fair, though, Jodorowsky is an equal-opportunity nudist: there are just as many boobs and frontbums as there are sausage-fests in this one.

Misanthropically  psychedelic, The Holy Mountain is a cresting wave of delirium: several scenes were reportedly shot with the actors high on LSD (the drug of choice in 1973, as you’d expect) and the brusque, brutal manner in which Jodorowsky refuses to blanche at some of the heinous things his characters (his actors) had to commit to is mind-blowing. The vagaries of the story blue into a litany of human depravity – the Alchemist boils a bot of human shit to turn it into a sizeable nugget of gold, there’s a weird massacre sequence in a Mexico City street that’s as confusing as it is immediately memorable, as several dozen residents are sprayed with red blood before having performative body-ruptured organ harvest performed on their bodies, there’s a protracted sequence in which the Thief, who spends most of the film in a tiny little Tarzan-esque G-string, is unconsciously used as a mould for hundreds of plastic Crucified Christ models by an irascible nun and her Roman-esque soldiers, and at one point one of the women in the film is ordered to “rub her clitoris against the mountain” in one of the most slack-jawed astounding scenes I’ve seen in many years – this isn’t a film for everyone, and I would caution many who find plotless arthouse films pointless to avoid this one at all costs.

It’s difficult to write about The Holy Mountain without just flat-out going scene by scene describing all the visual pleasures and shocks as they occur. It’s a film that barely pauses to allow the audience to ingest what they’ve just seen, before Jodorowsky moves onto the next cathartic sequence of drug-addled insanity. My favourite scene involves a nude woman masturbating a giant washing-machine-like robot to orgasm, and “winning” the competition to do so. It’s just so off-the-wall mad it turns back into must-watch cinema. Animal cruelty is also present: it’s rare to see frogs blown to smithereens for the pleasure of a cinema audience, but there you go. Also, there’s a brief and all-too-disconcerting scene in which two fighting dogs try to rip each other apart, which is obviously not fake. As I said, the weak of stomach need not enter The Holy Mountain. Given the film was made for around $750,000 (just shy of $5m in today’s value), Jodorowsky’s production design work and attention to detail in both the intimate, small-scale moments and the wider, huge scale crowd sequences, is spectacular. The seams of the film’s production are perfectly hidden by edits and colourful props, costumes and set designs, most memorably a rainbow-hued room in which the Thief approaches the Alchemist in the presence of a Bactrian camel for some reason.

In terms of acting, there’s very little to inform the audience of the quality of the performances. Being such a visual film, filled with subversive and controversial material, acting is the least important aspect of Jodorowsky’s requirements in this movie. Most of the cast are asked to get nude, smear themselves with all manner of disgusting liquids and bodily fluids, react to the supposedly mind-altering words of the Alchemist’s predominant narration of the events, and generally flail about in a completely stylistic manner that mitigates emotional content. The animals forced to participate routinely fuck, buck and cluck their way through an orgy of blood and hyper-sexualised analogism, and the esoteric phallic and yonic imagery used by Jodorowski throughout is considerably confronting, if not downright repugnant. It all has a point, I guess, I’m just not entirely sure what the point really is. 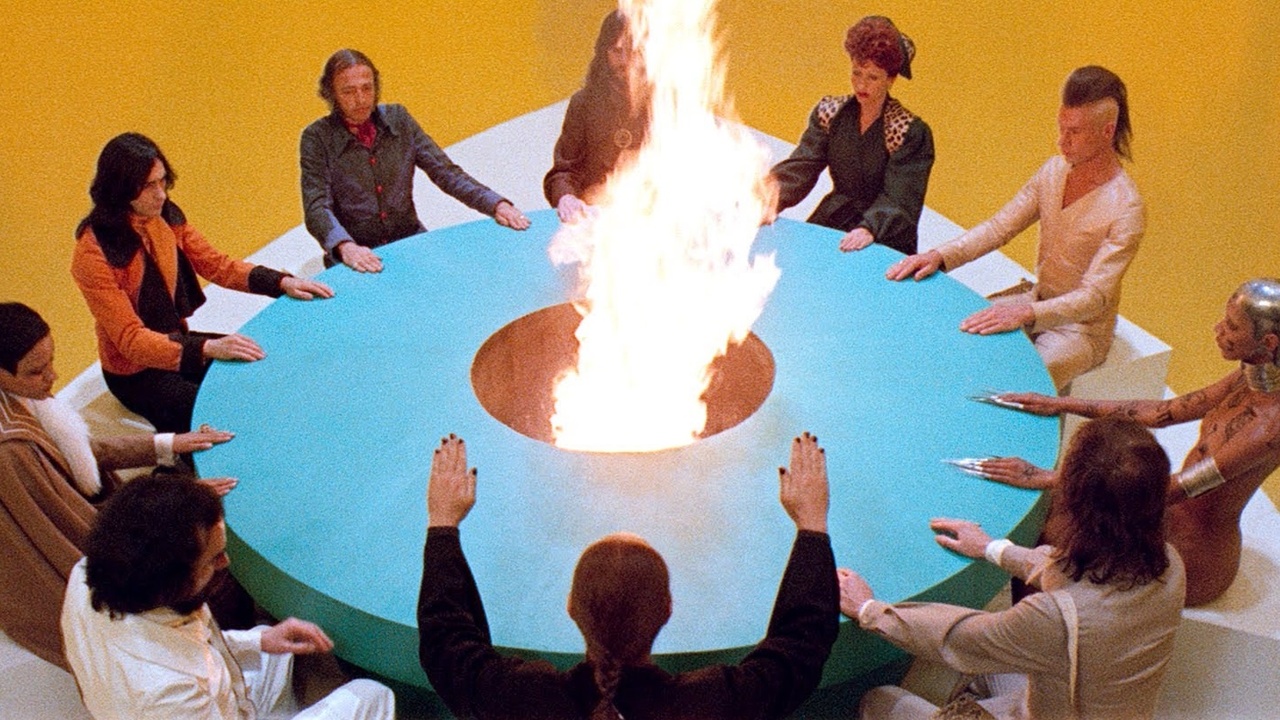 In many ways I think The Holy Mountain is representative of the burgeoning new wave of sexuality explored on film through cinema of the 1970s’. Hotpocket violence and sex were explored with similarly striking visuals (although countenancing a decidedly darker tone) in Kubrick’s A Clockwork Orange, which released two years prior, while provocative subject matter in both In The Realm Of The Senses, Salo and Last Tango In Paris, and the soft-core porn series Emanuelle, all tick the box of mainstreaming sexual activity on the big screen: don’t forget, the rigid Hayes Production code had finally been killed off in 1968 and a new breed of storytellers ascended after that. Filmmakers were unafraid to capture the raw, primal nature of both sex (a run of exploitation films from the 1970’s through to the early Eighties ensured teenage boys wandering into cinemas had a great time) and violence (Scorsese’s Taxi Driver, Mike Hodges’ Get Carter and Sam Peckinpah’s Straw Dogs were among innumerable films taking higher liberties with depicting violence on screen than audiences were used to) had a far freer reign back in the 1970’s than modern creators do today, and could showcase an unfettered look at humanity through what was then an unfiltered gaze. The Holy Mountain takes its cues from the violent and the profanely sexual, but it never really seems intent on specifically being provocative if it can do so with a subtle flourish. It takes the absurd and makes it even sillier. 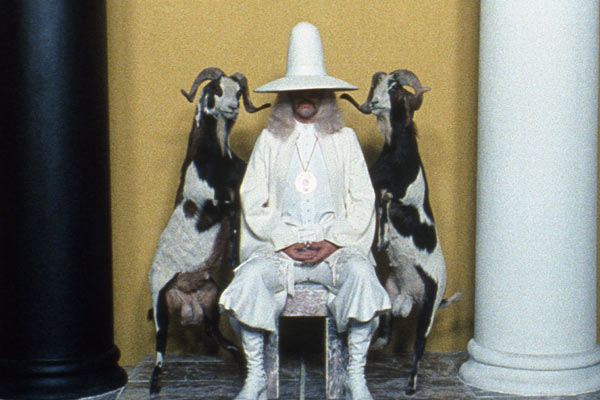 Reaching into the darkest corners of Catholicism, Taoism, Buddhism and probably a whole load of religions I’m managing to forget, Alejandro Jodorowsky’s The Holy Mountain is a promiscuously tantalising headfuck that has to be seen to be believed. A genuine product of its time (it could never be made for a mainstream market today, that’s for sure), some of it appears to have dated a little but on the whole the effect of a largely dialogue-free, rampantly provocative acid-trip into insanity is a masterclass of unforgettable grunge. Alternately filthy and pristine, its gratuity only matched by its subtle wit and satire of many human traits and beliefs, this confronting visual feast invites shock and awe, and at no point is it ever boring. Do yourself a favour and climb The Holy Mountain. For better or worse, you will never forget it.