Fresh from the success of his Oscar-winning Best Picture, The Shape of Water, director Guillermo del Toro returns to the past with another period flick in the form of Nightmare Alley, a version of the 1946 novel by William L Gresham and previously produced as a feature film in 1947, then starring Tyrone Power. Set in the seedy world of sideshow carnivals, with their various grotesqueries, Nightmare Alley is a story of polished conniving and greed, a man who uses his charm and an innate ability to scam people to make himself rich – until he takes on a fish too big to catch. With style to spare and solid cast, not to mention a terrific leading performance from Bradley Cooper, Nightmare Alley is a smoky, tense psychological thriller filled with great moments, bizarre and off-the-wall characters, and a foreboding, sinister tone. 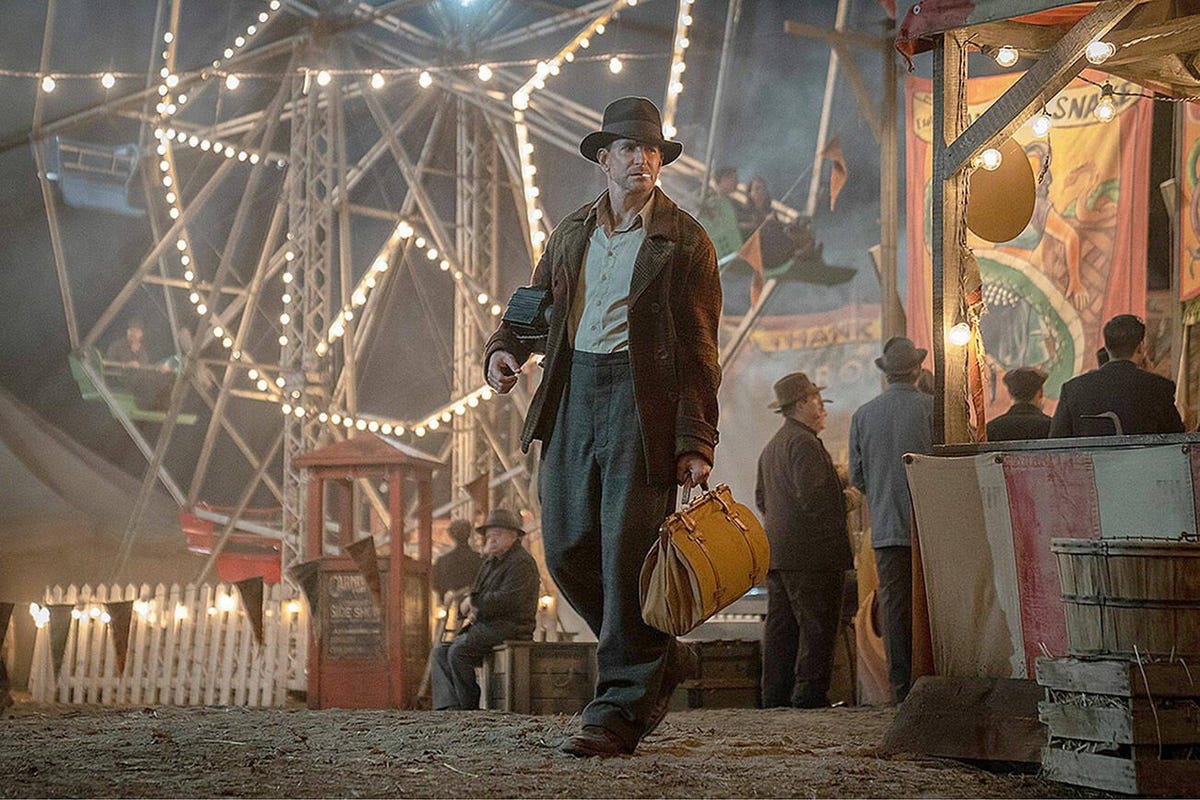 Cooper plays Stanley Carlisle, a carnival huckster of mysterious origins who turns up at a particular circus and gains employment performing various duties. The carnival manager, Clem (Willem Dafoe) even keeps a “geek show” on display, where a drugged or drunk individual in a state of euphoric confusion will bite the head off a live chicken. Stan befriends various carny folks, including “psychic” Zeena (Toni Collette), mentalist Pete (David Strathairn), and scantily clad Molly (Rooney Mara), who allows herself to be “electrified” using rudimentary Tesla coils. Stan senses a kindred spirit in Pete, and requests to learn the skills the drunken mentalist has, until one day he drinks himself to an early death. Stan leaves the carnival with Molly, and over the next few years they work as a team developing a successful mentalist show for wealthy patrons of city nightclubs. One evening, Stan is confronted by a psychologist, Ritter (Cate Blanchett), who challenges the authenticity of his act; humiliating her, Stan is sought out by wealthy multi-millionaire Ezra Grindle (Richard Jenkins), who wants absolution over the distant passing of his wife, Dorrie. In desperation and grief, Grindle exhorts Stan to conjure a manifestation of Dorrie’s ghost, something impossible, and yet a challenge Stan accepts: for a price. Were Nightmare Alley an item of clothing, it would be a silk shirt, or shimmering camisole. Elegantly told, with an edge of violence and gory comeuppance, Nightmare Alley is a superbly mounted piece of period fantasy in which ne’er-do-wells and wealthy upper-class swaffles trade esoteric blows in this conman-centric piece of artifice and extravagance from one of cinema’s master visualists. Guillermo del Toro’s grandiose style and dark sense of humour are brought to bear strongly on this story, a story no doubt torn from relatively recent history when it was first published as a novel in 1946; the film is set in the late 30’s, on the cusp of the Second World War, and the language and behaviour of the characters within the film is a delightfully acerbic throwback to dialects and colloquialisms now long since forgotten. The dank, unscrupulous life of carnival folk, travelling gypsies crossing the American landscape with their thrifty price-tag and equally threadbare morals, is presented with such affection you can’t help but think del Toro is almost apologetic they’re now absent. 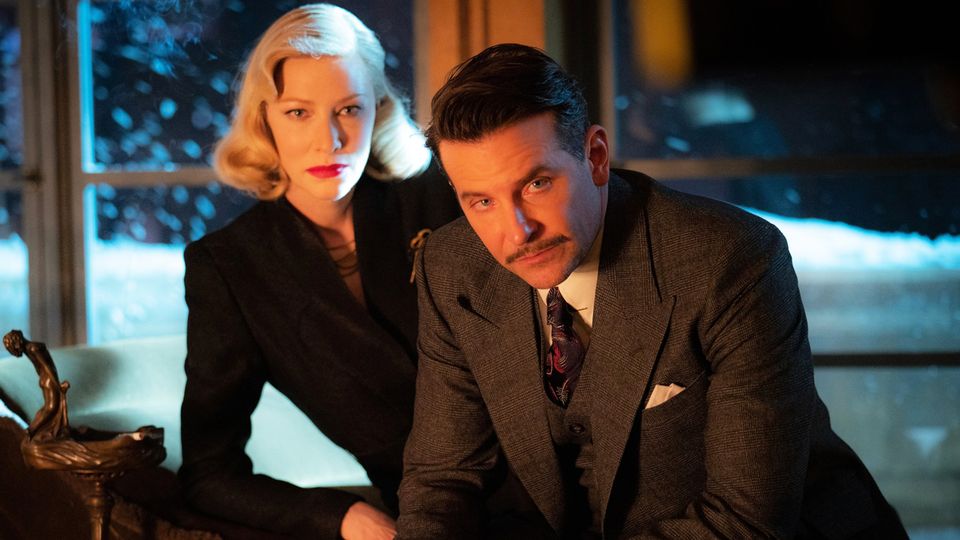 Watching Nightmare Alley, populated by people who are generally unlikeable, the viewer is drawn into the vicarious nature of scams and magic tomfoolery as presented by del Toro’s stylish direction. The idea of being smarter than anyone else in the room, of practicing a trick to fool people using code words, numbers and key phrases, eliciting a response from one of the hoodwinked that draws murmurs of appreciation from a willing crowd, is a fantasy for many; magicians have an allure all their own, and Bradley Cooper’s Stanley Carlisle most definitely has that special something alright – at one point, Cate Blanchett’s icy cool Ritter remarks that he’s “easy on the eye”, as if to suggest that part of his game is to be as suave and sophisticated as he can be to aide with his charade. But it’s all smoke and mirrors, the film’s peek-behind-the-curtain isn’t meant to be pretty or inviting, but rather sullied by the depravity of human nature. It is in our nature to corrupt all good things, and Nightmare Alley is definitely a respondent to the sinister ghoulishness of our purposeful lusts, greed and avarice. In may ways, Nightmare Alley parallels both the tone and overarching narrative of Christopher Nolan’s The Prestige; both stories feature men trying to become better magicians, until they take on a task to big and it ruins them. Written by del Toro and Kim Morgan, the film’s centrality involves Cooper’s Stanley trying to reel in the Big Score, the life-changing con that will see both he and Molly, a terrific Rooney Mara, setup for life, if only his impatience and arrogance don’t get in the way first. Diagonally intruding on Stan’s mission to hook his white whale, Cate Blanchett’s femme fatale role as Ritter is immediately dastardly, but that’s only in comparison to that of Stanley himself, who is immensely intrigant in his own right. Stanley’s awful past is alluded to in numerous fiery flashbacks (and only resolved at the end), but we’re largely unsure if he’s truly good or bad throughout. Hell, Cooper barely gets to utter a word for the first twenty minutes, as his character spends a lot of time simply observing others in the squalid carnival he enters; del Toro keeps us uneasy about Stanley’s true nature or his purpose at the carnival, until it becomes apparent that he is smart enough to learn from others and develop a “magic show” of his own. Cooper leads the film well. I’m not his most ardent fan, and have often found a lot of his performances a bit showboaty here and there, but on the whole he’s generally amiable and in Nightmare Alley he’s actually very good. His ability to produce a chameleonic turn from quiet observer to bullish showman, a little like Hugh Jackman’s PT Barnum, is a delicately poised one and roots the film with that off-kilter sense that quite literally anything could happen. Cate Blanchett is husk-whisper perfect as Ritter, as malevolent a presence in a film as you’ll see this year and arguably the arch-foil for Cooper’s broader style of performance. Toni Collette and Willem Dafoe are solid as fellow carnies, David Strathairn breaks your heart as a forlorn former success turned alcoholic, with minor roles to Mary Steenbergen, Ron Perlman, Holy McCallany and Clifton Collins Jr dotted throughout. Richard Jenkins has the best time, however, as the mysterious and obviously truly evil Ezra Grindle; Stanley recognizes that “he has sinned” in a way that suggests he’s never going up, only down, and Jenkins is quality enough actor to play that kind of presence up for all its worth. Sporting quite the healthy beard and a gravelly sotto voice, Ezra Grindle is one dude you most definitely don’t want to fuck with. Part of the allure of Nightmare Alley is watching this amazing cast perform at the top of their game with even the smallest of character roles. As I mentioned earlier, sliding into Nightmare Alley is a little like wearing comfy couture clothing, or sipping between silk sheets, only in a visual sense. The combination of evocative characters and del Toro’s sumptuous production design, manifested by DP Dan Lausten (John Wick 2, Proud Mary) and some truly remarkable sets and locations, make this thing a joy to engage with. Whether you find it compelling at an emotional level is another thing, for Nightmare Alley does feel a touch aloof in some respects, but I think fans of this kind of noir pastiche cinema and pulp writing will find a lot to enjoy.