Although his heart may have been in the right place, Adam McKay’s awkward, overlong, pretentious end-of-the-world metaphor for climate change is a terrible movie. Touted as a black comedy – much like his rather excellent The Big Short – this Leonardo DiCaprio and Jennifer Lawrence-led ensemble film strikes completely the wrong tone, with a load of humour that doesn’t work at all, marrying the Kubrickian deadpan bureaucracy of Dr Strangelove and the nonsensical rah-rah Michael Bay Armageddon histrionics to try and browbeat a weary audience into considering how we as a society have overlooked our imminent destruction at the hands of Mother Nature. The fact that a film analogy to climate change could easily be interchangeable with how we’ve handled the Covid19 pandemic is perhaps the most striking of notices Don’t Look Up contains. 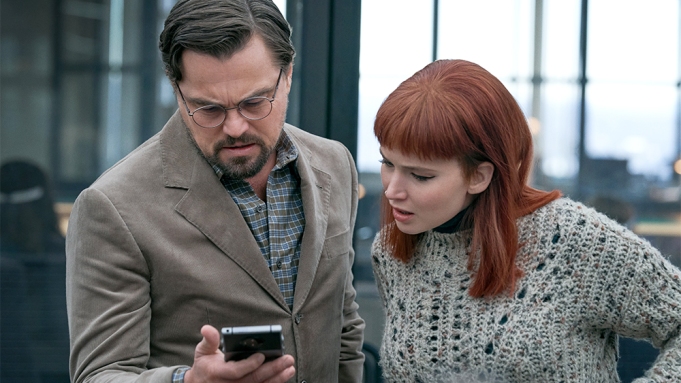 Two lowly astronomers – Kate Dibiasky (Jennifer Lawrence) and Dr Randal Mindy (Leonardo DiCaprio) – unwittingly discover an enormous planet-destroying comet heading directly at Earth. Shattered by their discovery, they contact Dr Teddy Oglethorpe (Rob Morgan – Greyhound), the head of the Planetary Defence Office (or something like that), who recognises the seriousness of the situation and takes them directly to meet the US President, Janie Orlean (Meryl Streep). When informed that planet Earth has roughly six months to prepare, the President scoffs in disbelief and deflects the concern of the scientific community. Rather than stay silent, Dibiasky and Mindy disseminate this information on both social media, through news outlets, and even on a popular lighthearted breakfast show hosted by inanely upbeat Jack Bremmer (Tyler Perry) and Brie Evantee (Cate Blanchett), the latter of whom strikes up an illicit romance with Mindy behind the scenes. As news of the comet’s approach initially is greeted with scorn and disbelief, propagated by the President’s upstart and arrogant son, Jason (Jonah Hill), eventually the celestial apocalypse appears in the night sky and forces everyone to confront their mortality in the most brutal manner possible. 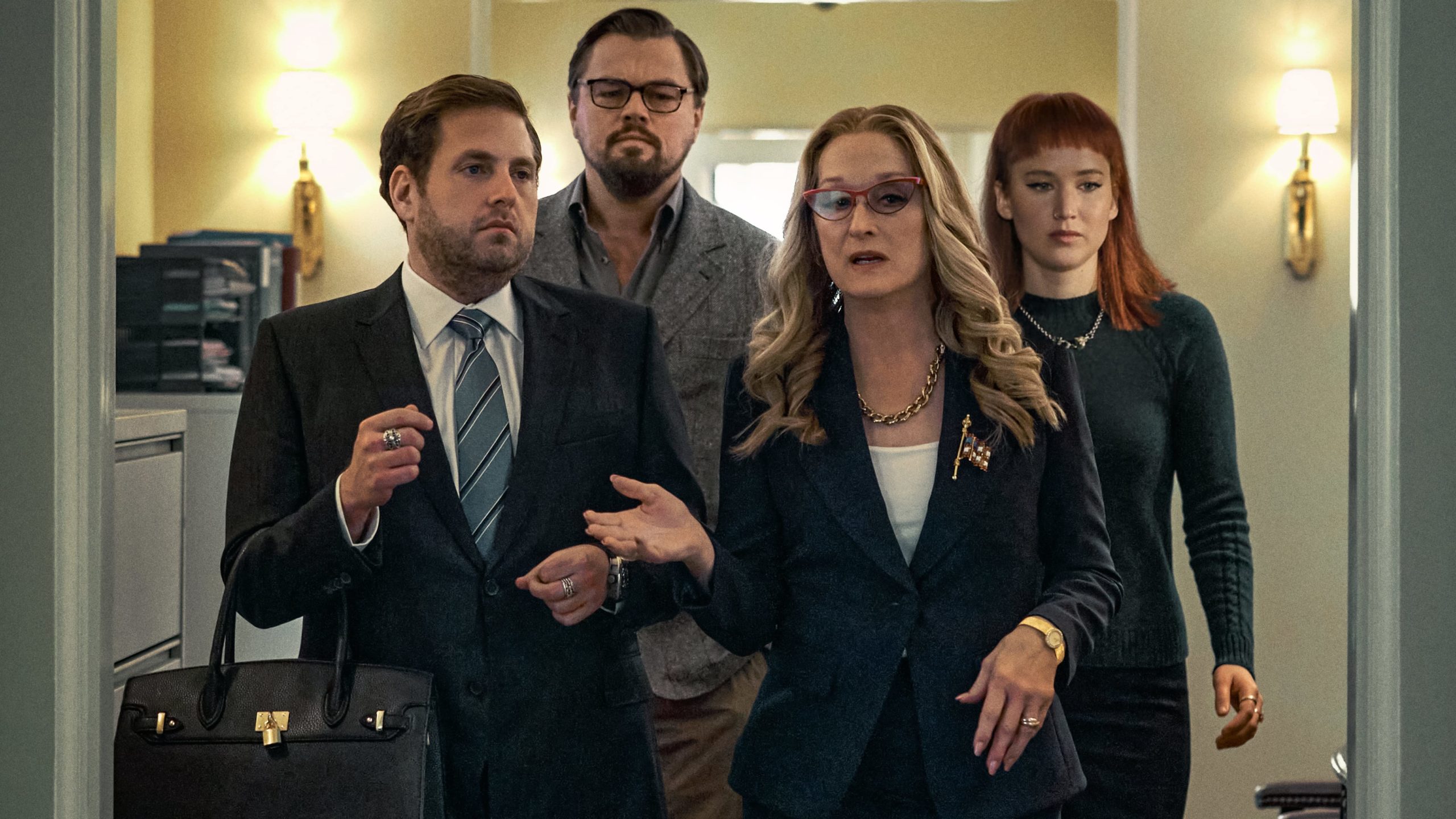 We are, in fact, living in an idiocracy. As much as philosophers and historians like to way lyrical about humanity’s apparent infinitum ability to live, love, laugh, and our attraction to heroism and being a better self, sometimes you just look around and the world is just…. dumb. I mean, like really, really, unapologetically dumb. In the last few years some segments of society have actually started priding themselves on being the dumbest possible people alive just to prove some weird, bizarre, banal point. Actively stupid, I call these people, the kind of irredeemable trash who think the earth is flat and the President is an alien robot. These are the kinds of people Adam McKay is targeting in his latest wide-sweep broadside of political, capitalist Americana, with the kind of bananas concept you can’t help but live, laugh, cry at if it weren’t all that far from the truth. Sadly, Don’t Look Up is entirely believable, although not being funny in the way I think McKay intends, it hammers home its point far too heavily to really latch on. 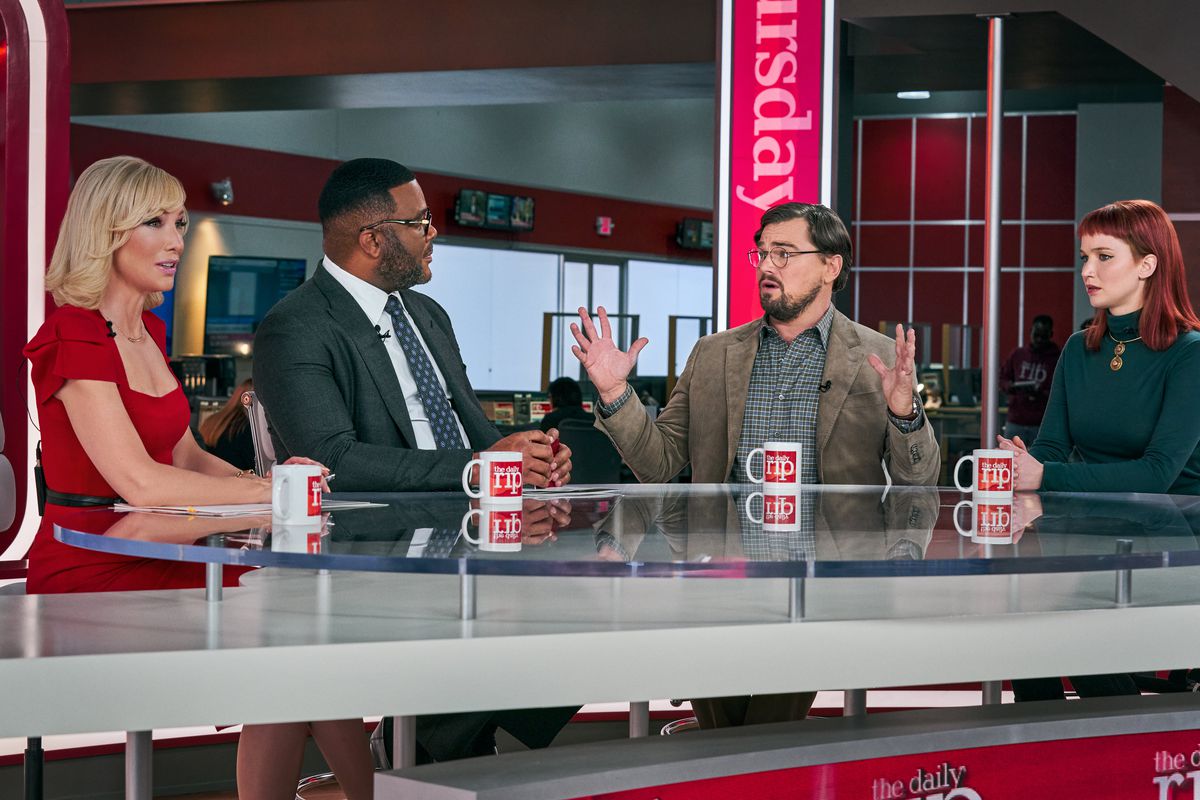 You see, stupid people don’t know they’re stupid. They also know when they’re being preached at, particularly by some leftist, sermonising white filmmaker like McKay, and I think it’s a miscalculation on the director’s part to turn this film into both an homage to, and diatribe against, the very people you hope to reach in this moment of existential crisis with such on-the-nose language. Then again, stupid people won’t get subtlety, so perhaps it’s McKay’s greatest trick in aiming his unsubtle, sledgehammer apocalypse motif at those too stupid to “get” subtle humour. Either way, I didn’t like Don’t Look Up. I understand what the film is going for, I get that it’s a metaphor for humanity’s bizarre refusal to accept the ongoing warnings about climate change, but as a movie it’s too schizophrenic to make much sense. 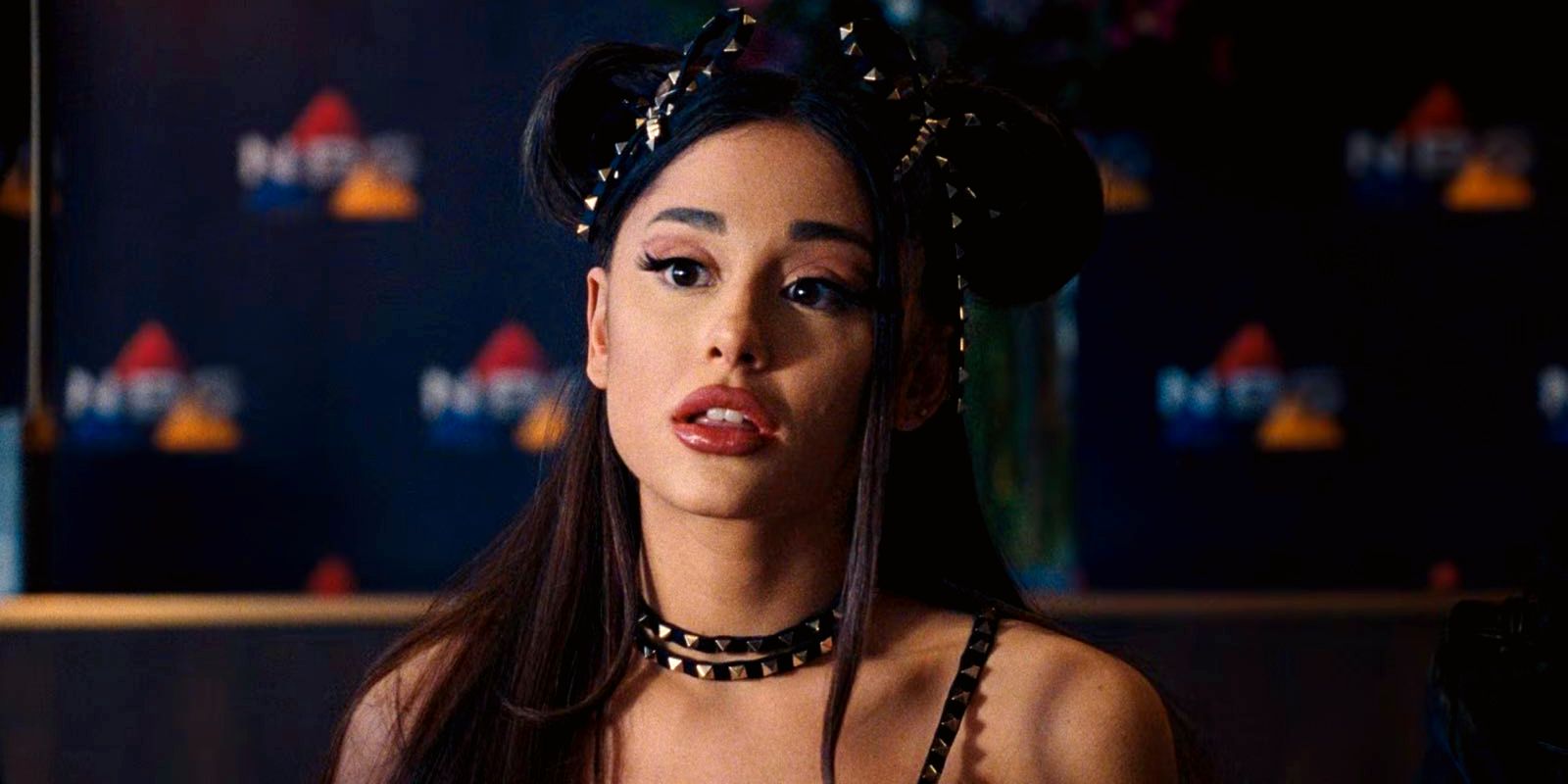 There’s good and bad to Don’t Look Up. On the former, the turns by Leo, Jennifer and Melanie Lynskey (as Leo’s on-screen wife) are effective and deliver plenty of pathos. Their endeavours to convince both the political and social spectrums that the comet is not only real but about to wipe out the planet are heartbreakingly true to form, not only in light of climate change but also other recent crisis including the Covid 19 pandemic. Stupid people claiming conspiracies, not wanting to face the godawful truth, relying on bloviation buffoons on far right “make ‘murica great again” platforms; they’re all here, in some form or another. So too is apathy – apathy from the media, a glorified entertainment complex more about consumerism than actual concern, tech trillionaires (in the form of Mark Rylance’s truly hideous performance as Peter Isherwell, CEO of the fictional BASH corporation – seriously, a dude needs to fire his agent if he’s taking roles like this) with small penises, scabrous political elite jostling for airtime and votes, and of course the rah-rah hysteria of a wound-up American military machine. Strangely, in a sharp U-turn from his normal choice of roles, Timothee Chalamet plays a last act disaffected youth in one of his least bizarre or challenging performances ever. And if you can explain what all that was with Ariana Grande, in a minor cameo role, you’re a genius. About the only person who comes out of Don’t Look Up with their career intact is probably Melanie Lynskey, because it sure isn’t Streep, Tyler Perry, Cate Blanchett or Jonah Hill.

The central problem with Don’t Look Up is that it just doesn’t land any jokes. It plays things too broadly, too over the top, to work. Black comedy works best when you’re laughing at how awful it all is, not how awful the film is. Take, for example, one of the greatest scenes of black comedy ever committed to the screen: the War Room sequence in Kubrick’s Dr Strangelove. In that sequence, the President (played by Peter Sellers) has a dialogue with belligerent General Buck Turgidson (an terrific George C Scott) about using nuclear weapons to prevent a nuclear holocaust, a dichotomy of hilarious and terrifying proportions. Not only is the scene played dead straight, with everyone believing they’re correct, Kubrick peppers in absolute howlers like “you can’t fight in here, this is the War Room” to make his point that war, no matter how righteous, is still war. It’s incredibly well acted, superbly staged, and of course written with sublime skill. Contrast that with a similar world-ending catastrophe, and Adam McKay – who has at his disposal some of the worlds greatest acting talent to pool from – fails utterly to generate similar comedically serious tones in his atonal mishmash of cultural references, all-too-brief cameos and an ongoing bit about having to pay for food at the White House. None of this is amusing, not the chortle-worthy Armageddon-style plan to blow up the comet, not the astoundingly daffy idea of the comet being immensely valuable with precious rare earth metals and thus providing “jobs” for those who might benefit from it, to the constantly bullhorn-obnoxious and protracted “news desk sequences” with Blanchett and Perry that never seem to send… none of it. What you end up with is a film devoid of tact or guile and instead, unfortunately, feeling a lot like the crazy guy standing on a corner yelling at the clouds. 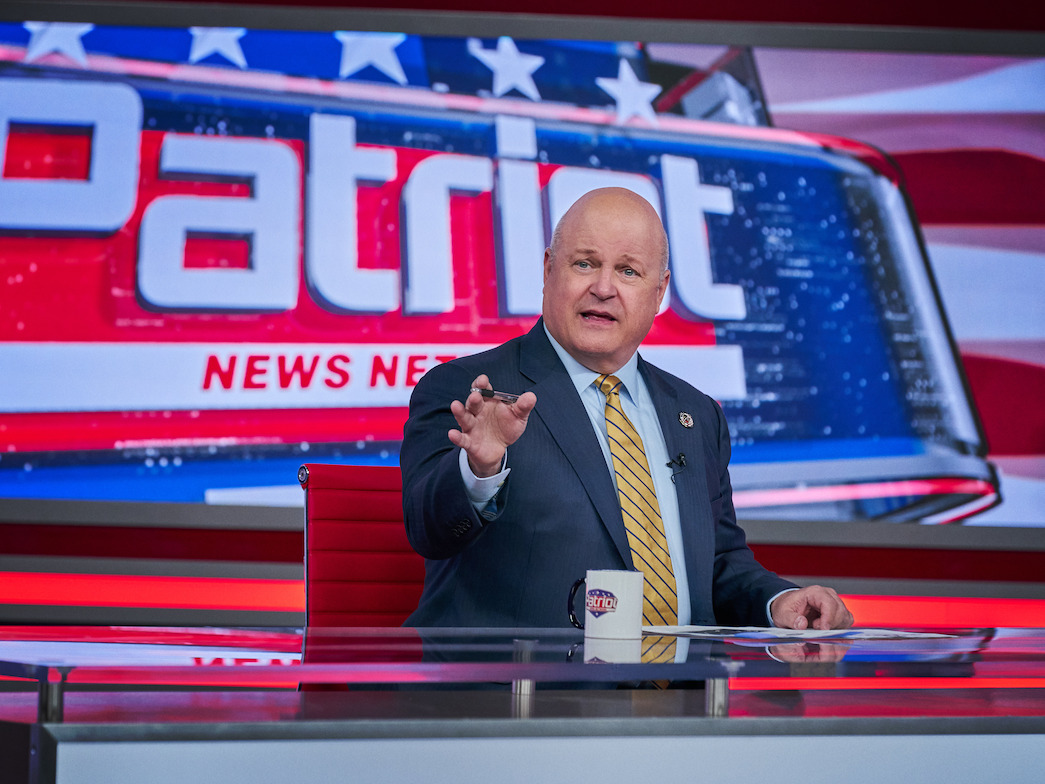 So, if you’re making a film in which the jokes don’t land, and it’s just not working, why would you then proceed to make it nearly two and a half hours long? I mean, seriously? Armageddon was about the same length but at least that had Bruce Willis killing an asteroid and Ben Affleck fucking Liv Tyler (to say nothing about Liv’s dad providing a hell of a closing credit song); Don’t Look Up is a real slog clocking in at 130 minutes and change. The bizarre closing scene, involving several wealthy lobbyists and political donors landing on some far flung planet in cryosleep, having escaped the conflagration of the preceding two hours, is the deranged abortus in McKay’s cinematic miscarriage, a truly misaligned moment of “comedy” that has all the impact of a wet turd in the face. It shows how out of tune the tone of Don’t Look Up really is, that it has to stoop to a fully CG landscape, a bevvy of not-quite-nubile nude extras and some weird Avatar castoff designs to try and land a punch, when the preceding minutes failed to do so. Don’t Look Up could have been a really, really punchy 90 minute movie and been all the better for it; restrain the overload of obvious satire and montages of humanity being plainly idiotic, and maybe focused the story on either Leo or Jennifer rather than the both of them, and I think this could have been quite a decent effort. 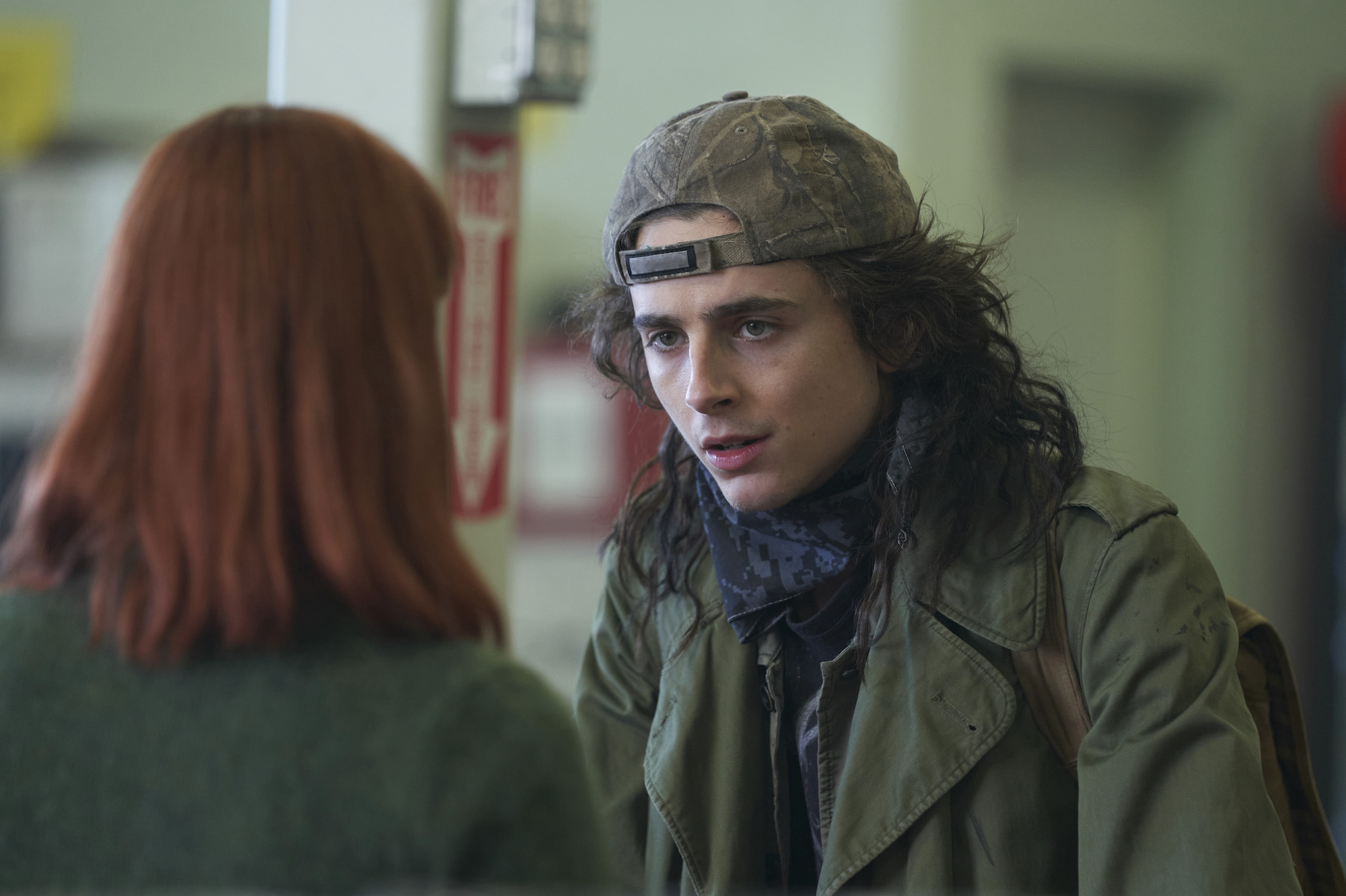 Don’t Look Up is a film in which none of the deleted scenes were cut. It’s also a bastardly inane comedic effort barely masking its contempt for various sections of our society, and for that it’s nigh unforgivable. That so many have been suckered into thinking this film is high art is astoundingly depressing, with not even a committed performance by Leonardo DiCaprio – whose real-world efforts in combatting climate change as a high profile celebrity have been commendable – able to salvage much from this trainwreck. Long, pretentious, largely unfunny and boasting some woefully awful characters, Don’t Look Up is a misfire and a mistake. I urge you not to bother.