I doubt the words “Nuclear Combat” have ever been so funny.

Kubrick’s one and only comedy – a black satire that’s less rib-tickling guffaw and more internal wince at how stupid militarism can be – is still as sharp and relevant in the here and now as it was back in the mid-60’s. The shadows of war in the years since, from Vietnam, to the 1991 Gulf War, to 9/11 and the War On Terror, loom large within the international psyche, contrasting superbly with Strangelove’s brilliant anti-military subtext; the film’s bludgeoning of the military industrial complex and its inherent human faults would be funnier if it wasn’t so possible. 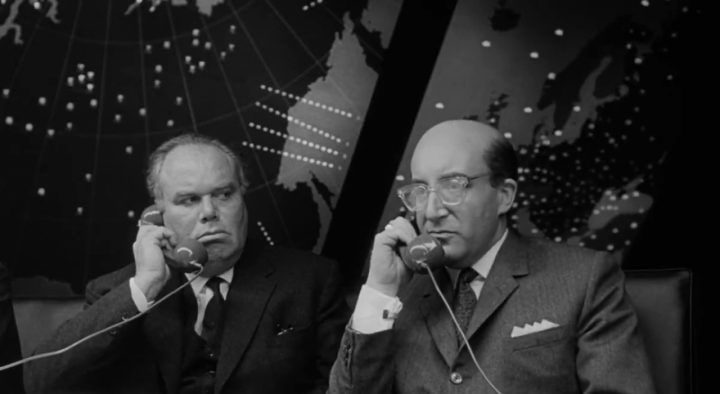 When a rogue American base commander, Jack D Ripper (Sterling Hayden) signals to an unstoppable mission to bomb Russia with nuclear weapons, the US President, Merkin Muffley (Peter Sellers) and his commanders, including the warmongering General Buck Turgidson (George C Scott), as well as former Nazi nuclear war expert Dr Strangelove (Peter Sellers), try to avert nuclear catastrophe. Aboard one of the Russian-bound aircraft, Major “King” Kong (Slim Pickens) and his flight crew (including James Earl Jones and Shane Rimmer) discuss the fact that what they’ve been ordered to do will bring about an atomic holocaust.

By God, how I laughed watching this. I laughed, and silently grimaced at its accuracy. US militarism has since become even more predominant than even this film could have imagined, as has human greed, stupidity, and our propensity to devise methods in which it becomes easier to destroy ourselves. Strangelove’s themes of self-destructive idiocy is sublimely written, carried out with equally sublime performances by the cast – all of whom do terrific work, especially Peter Sellers in a trio of hugely enjoyable roles – and given stark iconographic representation by Kubrick’s use of black and white photography to sell the visual tone. 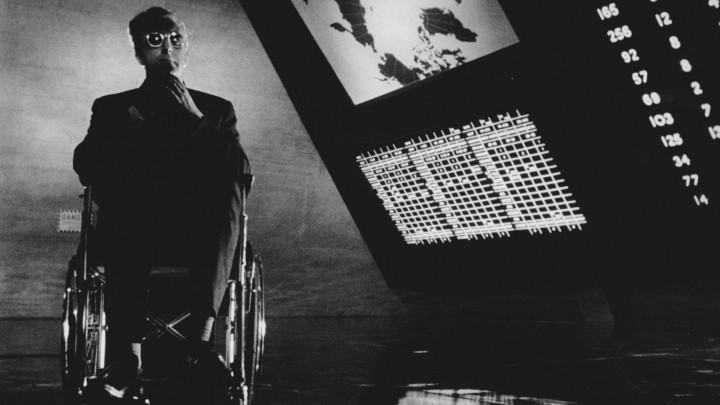 Outside of the horrific juxtaposition of human ineptitude and the onset of the atomic holocaust, Kubrick’s superb script is inhabited by archetypal players in any such scenario, given hilarious names that belie the satirical nature of their actions. Sellers plays three roles; the US President, whose names “Merkin” and “Muffley” refer to pubic hair, the titular Dr Strangelove (whose German origin name, Dr Merkwürdigliebe, translates into English as “Strangelove” – a delirious in-joke that only folks who know German will pick up), and British Group Captain Mandrake (your typical stiff-upper-lipped soldier type) who tries to talk Sterling Hayden’s insane Jack D Ripper down from his platform of war. Sellers is terrific, apparently ad-libbing a large quantity of his dialogue allowing Kubrick to use the most perverse double-talk into the film. President Muffley’s famous line: “You can’t fight in here, this is the War Room”, allows for a beat of self-aware laughter, and is possibly the cleverest moment in a film chock full of them.

George C Scott’s personification of the US’s then cliched square-jawed bombastic commander type, the opportunistic warmonger who prides American might over inadequate ability, Buck Turgidson, is an absolute scream. Turgidson by name, turgid by nature – Scott’s performance of the role is bloated with bluster and arrogance (much like a turgid erection, one imagines) and nearly steals the film outright from Sellers. If anything, Scott’s role here is the perfect antithesis (nay, parody) of his similarly pompous role of the US’s famous General in Patton. You can see the glint in his eye while delivering some of the ripest military dialogue ever put onto the big screen. Obviously Sterling Hayden’s Jack D Ripper (references to Jack The Ripper, doh) is designed as a parallel to uncontrolled or inadvertent human error, with Ripper’s references to “bodily fluids” and his obsession with water astutely creepy as the man’s paranoia overtakes logic and reason. Then there’s Keenan Wynn, as Colonel Bat Guano (Bat Shit), who discovers Group Captain Mandrake following Ripper’s mid-film suicide; Wynn plays the “Everyman soldier” with aplomb, and his patter with Sellers is as sarcastic and superbly underplayed as anything else in the film. 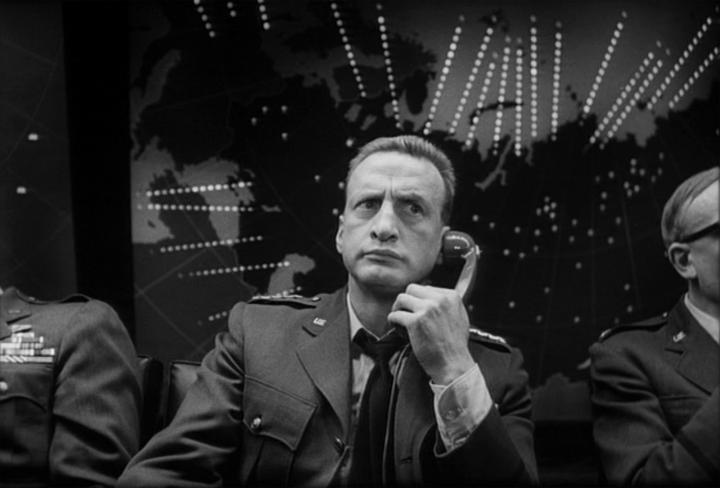 Dr Strangelove is based on the 1958 Peter George novel “Red Alert,” which, while a substantially more somber affair, describes the stupidity of human warfare with equal accuracy. Kubrick’s adaption, while satire, is saturated with Cold War paranoia and then-predominant “we’ll strike first” thinking in the US military’s assessment of “nuclear combat”, an utterly redundant phrase that belies how absurd the very notion of it actually is. The jingoistic War Room commanders and earnest entreating of the Soviet premier, an off-camera character named Dimitri Kissov, to help with avoid catastrophe. Part of “Red Alert’s” dramatic impetus was to examine just how easy it would be to trigger a nuclear strike, and Dr Strangelove’s fictionalized narrative would have served to make this blatantly obvious to general audiences that, if not for the integrity of the men and women of the US military, something like this could happen anyway.

Strangelove’s subtext is sublime and copious; the film could be unpacked a hundred ways from here to doomsday. Each line of dialogue, each shot and moment of black comedy is deleriously clever, making this possibly my favorite Kubrick screenplay (although, with much of Sellers’ dialogue being ad-libbed, exactly how much is the actor and how much is Kubrick I’m not sure) for sheer overload of concept. There’s so much double-talk here, so much entendre work, so much clever use of phrasing and militaristic lingo, it’s the kind of film you really have to examine closely just to acclimate to the level of Kubrick’s writing. The film’s stark cinematography is gorgeous, the Laurie Johnson score is sparse – a crucial moment where Slim Pickens and his flight crew are rallying to unload a bomb is backed by “When The Saints Go Marching In”, which made me smile for its inscrutable irony – and Kubrick’s use of framing and editing is among the strongest of his career here.

I imagine Dr Strangelove isn’t looked upon favorably by the conservative among us who would look upon some of what transpires here and wonder if this shouldn’t be the outcome of any potential nuclear strike. Scary as it is to consider, there’s modern analogous characters within American politics today who would not look out of place among this films’ deadly black wit, if only for their taciturn nature and inability to see beyond their own short-term gain. If it struck a chord for audiences back in the 60’s, for its dark humor and truly frightening believability, then it’s downright terrifying to consider that perhaps not that much has changed in the years since.