In all of recorded cinematic history, there are really very few truly great movies in the relatively tiny submarine film genre. Arguably that list might include Das Boot, probably U571 (despite glaring historical inaccuracies) and The Hunt For Red October, at least in terms of modern entries, but in the vast wartime genre of filmmaking very few have focused on the underwater battles and even fewer have been legitimately excellent. Greyhound is a solid entry into that hallowed genre, although in truth it’s not so much a film from the viewpoint of submariners but rather those seeking to destroy them. Led by Tom Hanks and a resolute cast of able-bodied seamen, Greyhound’s waterlogged battle sequences and ticking-clock tension engender plausible and appropriately incoherent wartime violence within the context of a largely non-graphic aesthetic far removed from the blood and guts of most modern genre films. 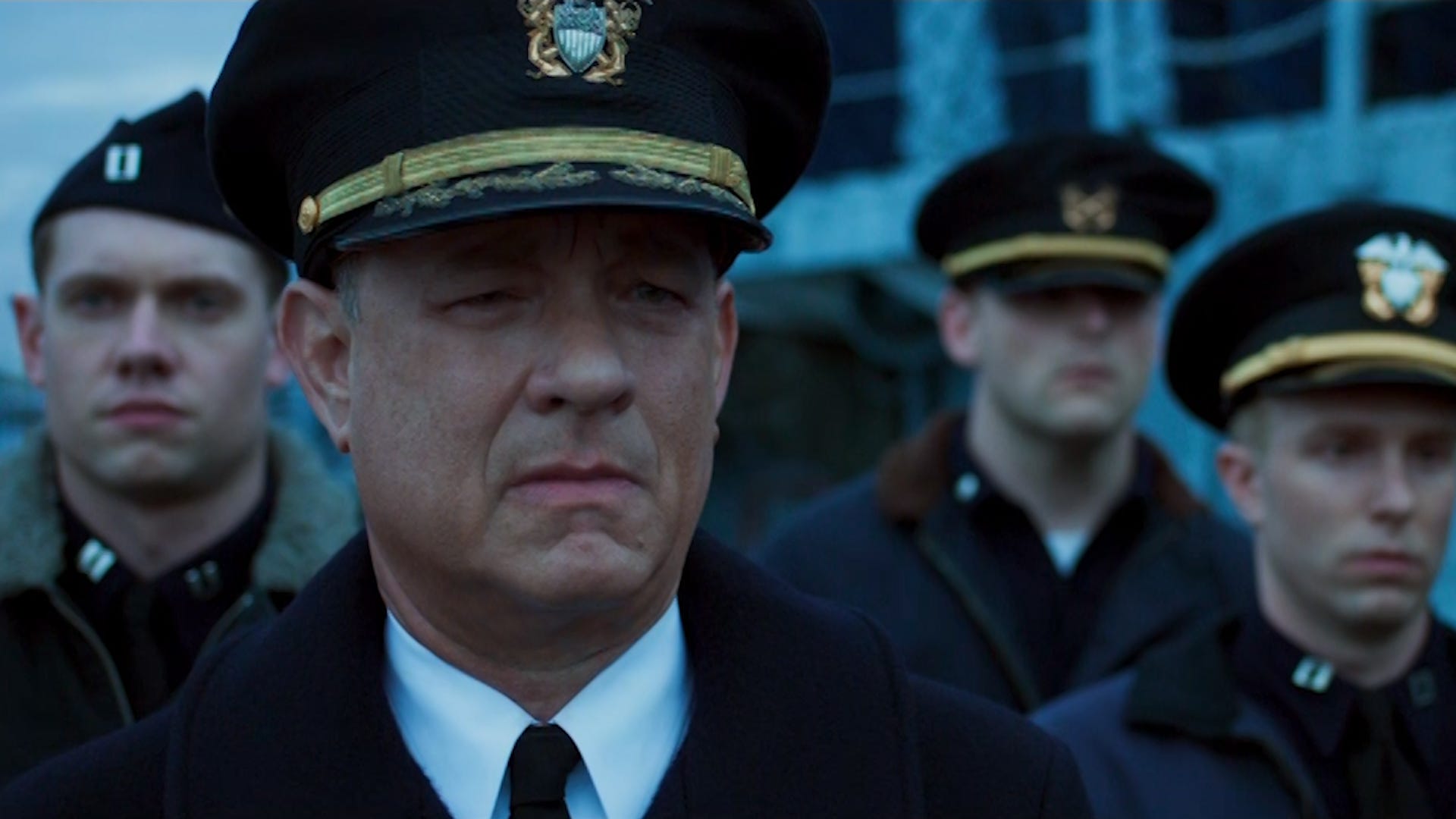 In the early stages of America’s participation of World War II, the Navy was  tasked with escorting supply ships from the USA across to the ravaged, blitzkrieg-riven Britain. The Atlantic was a treacherous battleground for most major shipping lanes, with attacks by deadly German U-Boats, their submarine force, destroying significant numbers of supply vessels and putting strain on the Allied forces on the front. With airforce bombers limited in the distance they could fly before turning back (on both sides of the Atlantic), there was an enormous section of the ocean between the continents – named the Black Pit – where the convoy of boats, numbering in the high 30’s, would be essentially unprotected from the evil beneath the waves. Warships, comprising both US Navy warships and British destroyers would attempt to protect the unarmed food, fuel and medical ships as they crossed this part of the ocean from the quicksilver underwater Nazi fleet, and it’s in this theatre of war in which we find ourselves in Greyhound. 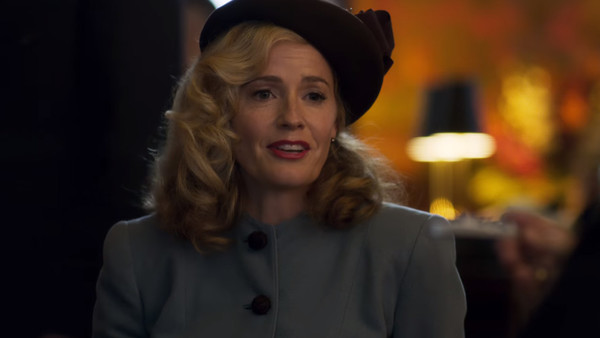 Hanks plays Commander Ernest Krause, captain of the USS Keeling – codenamed “Greyhound” – in what eventuates is his first wartime command. His is the lead ship in a flotilla of 5 similarly powerful navy vessels, codenamed variously “Harry”, “Dicky”, “Eagle” and “Viktor”, who spend a horrifying 50 hours inside the Black Pit trying to protect their charges and combat the omnipresent threat of torpedoes from unseen enemies. Krause, together with his Lieutenant Commander Charlie Coe (Stephen Graham) and his crew of of fresh-faced navy recruits, have to use all their guile, ingenuity and stoicism to weave the ocean waves dropping depth-charges and using their enormous guns to route the enemy, in order to make it across to Britain and the relative safety of air cover. 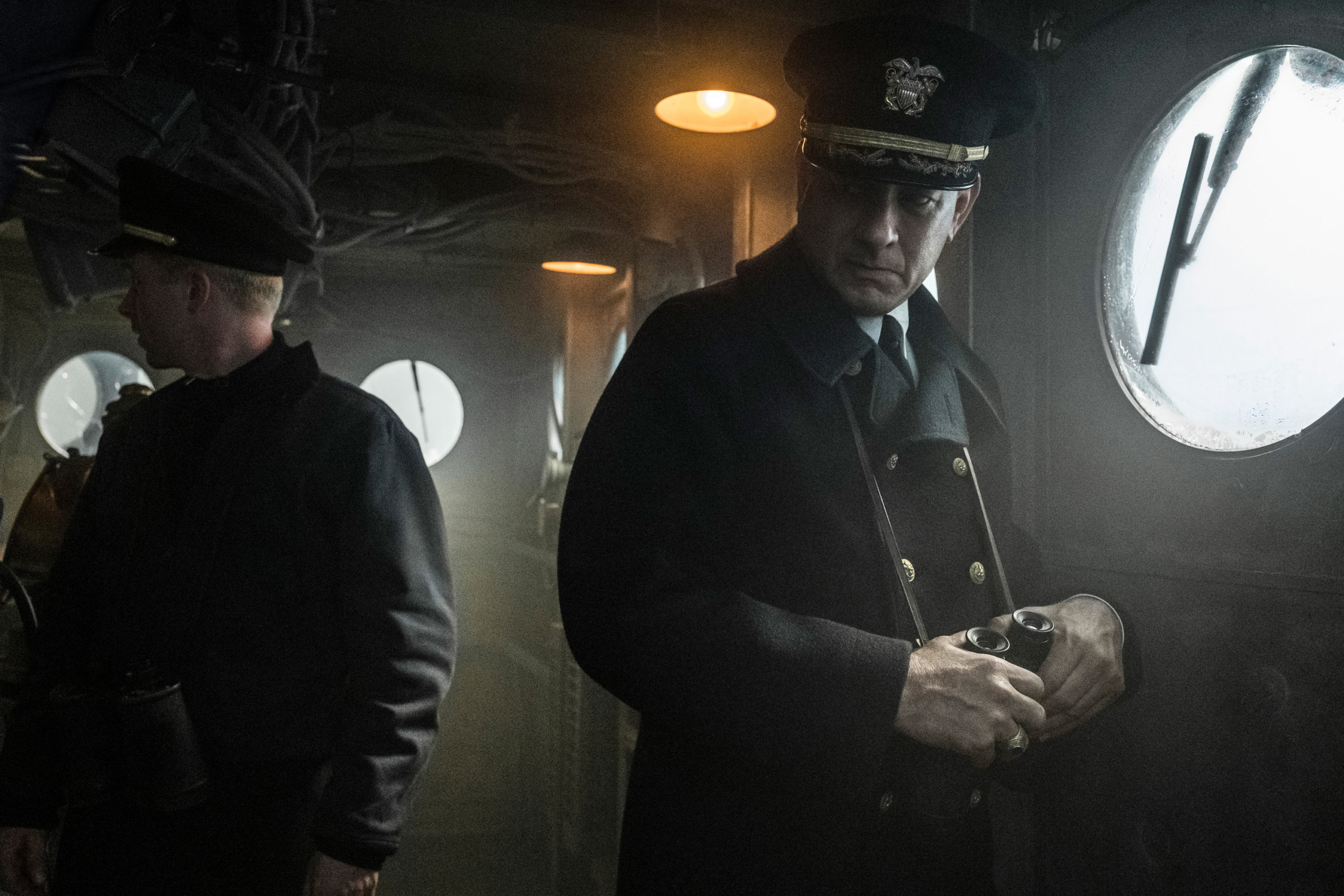 Tom Hanks’ longstanding dedication to pay tribute to the actions of the US military in World War II continues with Greyhound. While most will recall him leading the charge in Saving Private Ryan, Hanks has also been a high profile producer on period productions Band Of Brothers and The Pacific (both prestige miniseries on HBO), and flirted with espionage in Bridge of Spies, which while not about the second world war specifically, owed a lot to the period regardless. Hanks even goes so far as to have written Greyhound’s screenplay, so you’d expect the film to be something of a passion project given the star’s proclivity not to write for the screen typically – his only other prior feature writing credits are That Thing You Do (1996) and Larry Crowne (2011). His writing here opts for a miniscule emotional anchor in an opening scene mini-romance: Hanks’ Klause is apparently mid-relationship with Elisabeth Shue’s character, with a weirdly awkward conversation between the pair prior to Hank’s seagoing adventure trying to root his destiny in some kind of romanticised Boys Own Adventure fairytale. It’s only once we actually get out to sea that the film finds a more solid footing – yes, I understand that’s a contradiction considering how unstable the ocean can be – and it’s here that Hanks writing shows its strengths and weaknesses wholesale.

Oftentimes a lot of these war films trade on the inhumanity of war, and Greyhound is no exception. The crew of the Greyhound are a roster of interchangeable white men (black men served as cooks or cleaners in the US Navy at the time, deemed unable to fight in This Man’s Army – a notable point made in Michael Bay’s excruciating Pearl Harbor – and several minor ethnicities, with the most crucial being the small bridge crew and the requisite sonar signal expert. A lot of the film’s running time is spent head bent towards low-tech sonar screens, anticipating the ping and bing of a sub’s appearance in the movie, and despite a barrage of these scenes tending to blend into each other, director Aaron Schneider (Get Low) carves out a rising dread amongst the crew and us, the viewer – Greyhound’s depth charges, their main defence against the U-Boats, are depleted quite quickly, leaving them largely defenceless for the back end of the film, and so the cacophony of firepower and relentless death from below becomes exhausting in its cresting waves. Hanks excepted, the cast are roundly interchangeable, a largely white mass of humanity bucked and bowled by the pounding ocean maelstrom, and for the life of me I couldn’t remember any one character’s name once it all finished. Is this a deficit to the film? Not really: I don’t think the point of Greyhound is to go on one single character’s journey per se, but rather thrust us into the absolute horror of the Battle Of The Atlantic to experience it. 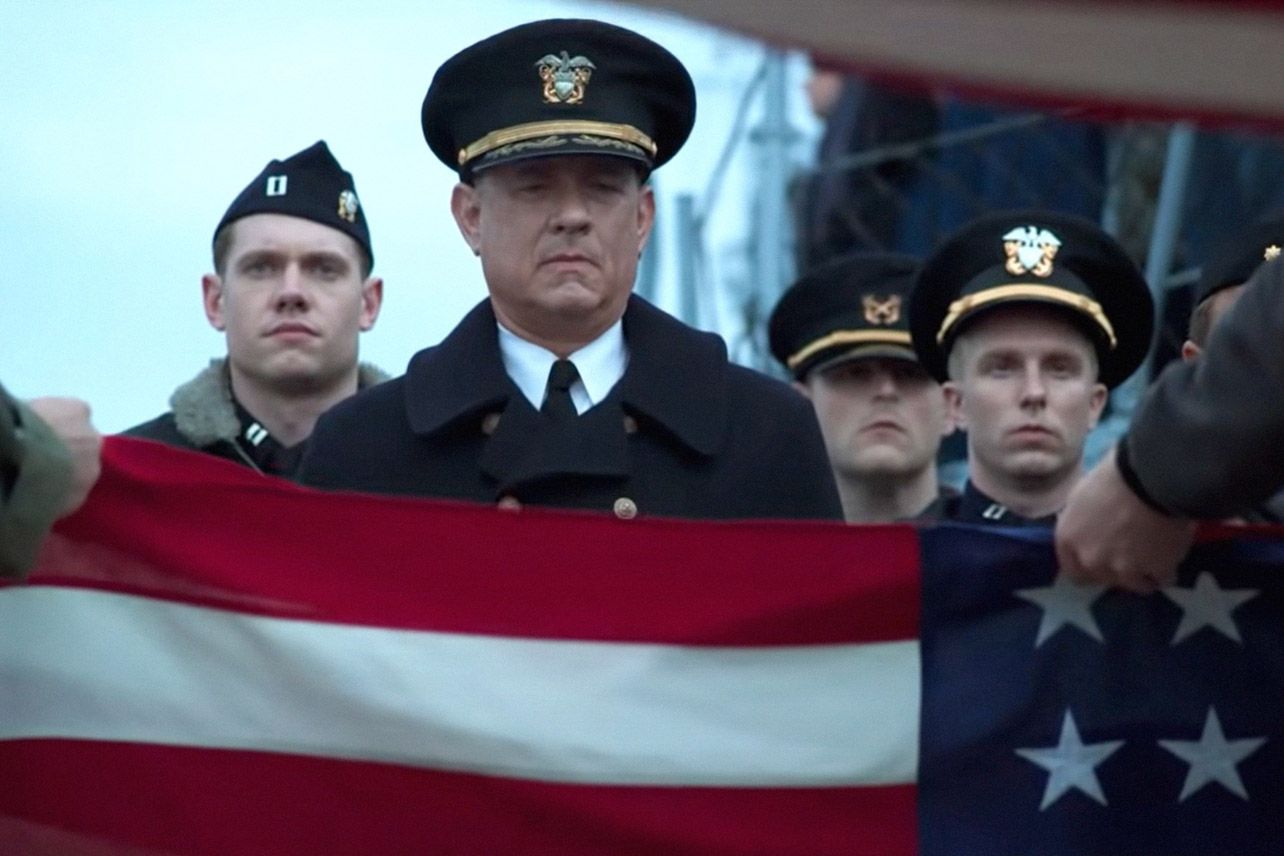 For his part, Hanks treads similar emotional ground that he did in Saving Private Ryan: his character is quiet, unassuming, honourable, demanding of respect, and motivated to keep as many of his crew alive to the other side. If only for a few extra kilograms around his jawline, Hanks’ Commander Krause might as well be Private Ryan’s Captain Miller for all the difference in their personas. As I mentioned, however, the film isn’t so much a character piece as it is a showcase of wartime bravery and astonishing sacrifice in the face of imminent, unrelenting death, so it makes sense that even a major star like Hanks takes a back seat to the scope of Atlantic combat.

When it comes to the depiction of seagoing combat, Greyhound is simply spectacular. The visual effects on display here are brilliantly executed, seamless and, despite having that overused desaturated look a lot of “serious” war films find the need to have, chillingly effective. The freezing ocean waves and metal-and-flesh carnage have never looked so destitute of colour and hope. Shelly Johnson’s cinematography feels fluid and crisp without that ubiquitous jittery framerate shorthand style, some terrific framing and hiding of obvious bluescreen (or greenscreen, whatever) seams between the water spray and grey hulking ship hulls pounding through the waves. I don’t recall much about Blake Neely’s score, to be honest, so I guess it’s not.. that memorable? Keeping things.. er, afloat, so to speak, is the editing work of Mark Czyewski and Sidney Wolinsky, who manage to draw coherence from the frenzy of ocean battle and keep things on track. The quieter moments are few and far between, really, although in retrospect the fact the film barely runs 90 minutes including credits says something about dramatic expediency here. It’s disingenuous to consider Greyhound short-changed by a short running time, rather it’s a film that performs well above its mandate simply by virtue of a simplicity of story being told simply. 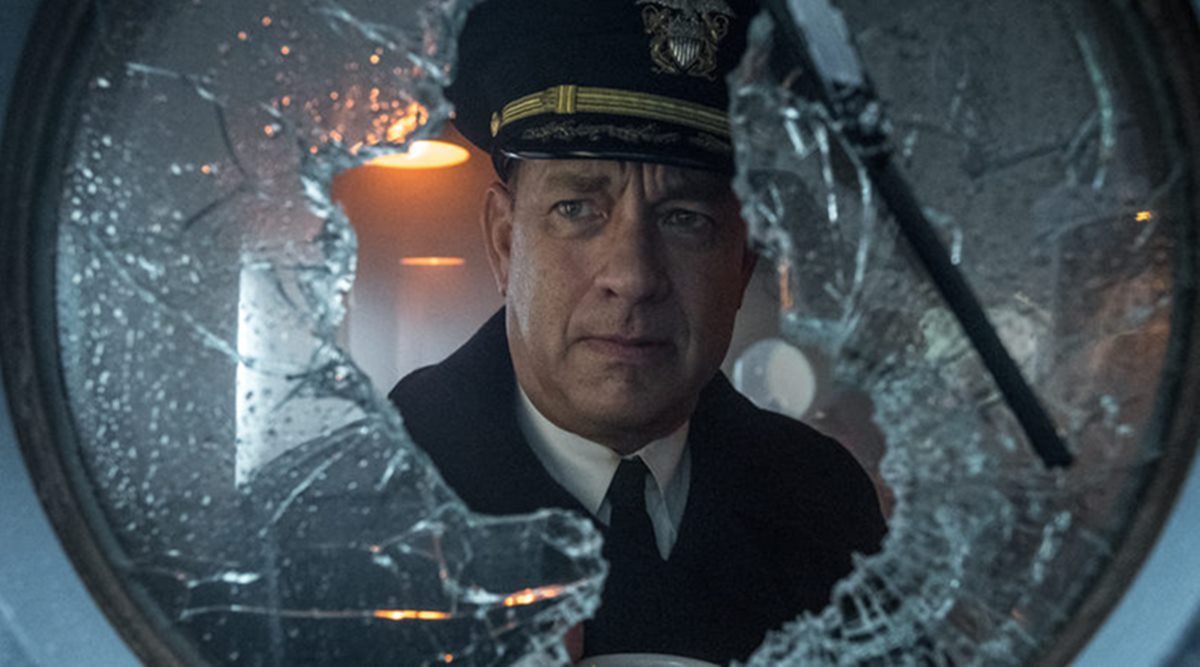 Greyhound may not rattle the cage of its classic screen brethren for icon status, but it’s as amenable and entertaining a war film as you’ll find these days. While it’s shallow on character, and the titular vessel could have been crewed by three dozen department store mannequins for all the script gives the human fodder things to do, the action sequences, visual effects and inherent tension and dread within the premise will keep your interest for as long as the film runs. Solid if undemanding fare.