Preposterous, inane, vacuous and stupid; Red Notice is all of these things – and it’s arguably a terrible riff on The Thomas Crowne Affair or Indiana Jones – but I’ll be darned if I didn’t have a blast watching it. Led by three of the most popular film stars working today, each at the top of their games with massive franchises and pop culture cred afforded their star billing, Red Notice ought to have been a slam-dunk hit for streaming platform Netflix, which optioned the rights following Universal Pictures’ decision to delay the film due to the Covid-19 pandemic, but critical reception has been mixed at best, and outright hostile at worst. It’s hardly the worst film of the year – hell, I’ve seen worse films this month – and many of the critics have rightly pointed to its sheer dumbness and almost offensive treatment of the audience in being unwilling to think for themselves, but with the joyful banter between Dwayne Johnson and Ryan Reynolds, the latter of whom appears to have simply rolled right off the set of Free Guy and onto this one, and the allure of the stunning Gal Gadot in a variety of va-va-voom outfits, Red Notice is an enjoyably silly action romp that’s as forgettable as it is risible in places.

Reynolds plays art thief Nolan Booth, who is hunted by both Interpol (who issue the titular “red notice”) and FBI Agent John Hartley (Johnson) as he attempts to steal priceless artefacts once belonging to Egyptian Queen Cleopatra, depicted as oversized Faberge eggs and, not surprisingly, quest-worthy numbering three in existence. Also hoping to claim possession of the three eggs is fellow thief known only as the Bishop (Gal Gadot); a super-rich Egyptian businessman wants the eggs delivered to him for his daughters wedding, and the reward for success is exponentially alluring. Globetrotting the clues and wrestling with combative distrust, Booth and Hartley find themselves in begrudging alliance as they hope to evade capture, the wrath of arms dealer Sotto Voce (Chris Diamantopoulos) and the danger of a hidden Nazi bunker in order to locate the prized artefacts. 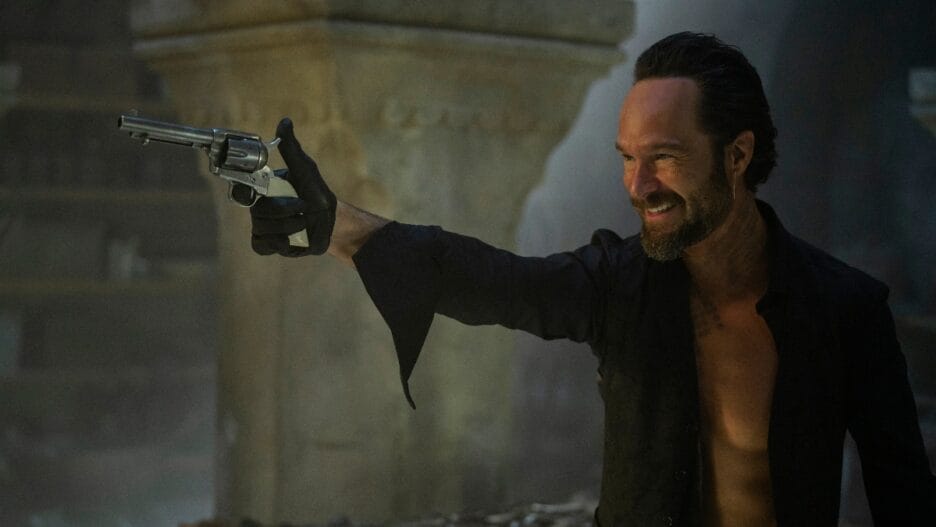 Red Notice has the disposition of well worn shoes, comfortable pyjamas and wood-stained whiskey. It’s a vastly facile facsimile of superior genre films, such as the aforementioned Thomas Crowne Affair, Indiana Jones, a little bit of Steven Sommers’ The Mummy, a scoop of Mission Impossible and a heaping of James Bond’s evocative global scope, offering plenty of guffaws and ripe jabber from Reynolds, a load of confused-or-angry-faced Dwayne Johnson, and a sensuous Gal Gadot playing with the guys’ (and our) sexuality with glee. This isn’t a smart or interesting film, and aside from the last-act plot twist the film hits its straps from the get-go and doesn’t let up throwing every trope, cliché and overstrung dramatic beat at the audience. It doesn’t play around with the familiar heist tropes it engages with, it just amps them up with dynamic cinematography and some occasionally excruciating green-screen. Expecting more from a film in which you have Reynolds and Johnson teaming up is perhaps more fool you than it is the filmmakers, for the the whole thing hangs solely, specifically, and only on their screen personality and elbow-in-the-ribs chemistry (which is palpable, it must be said); written and directed by Skyscraper helmer Rawson Marshall Thurber, the film is slickly produced and effortlessly entertaining but, like fast food, forgettable the moment the credits roll. 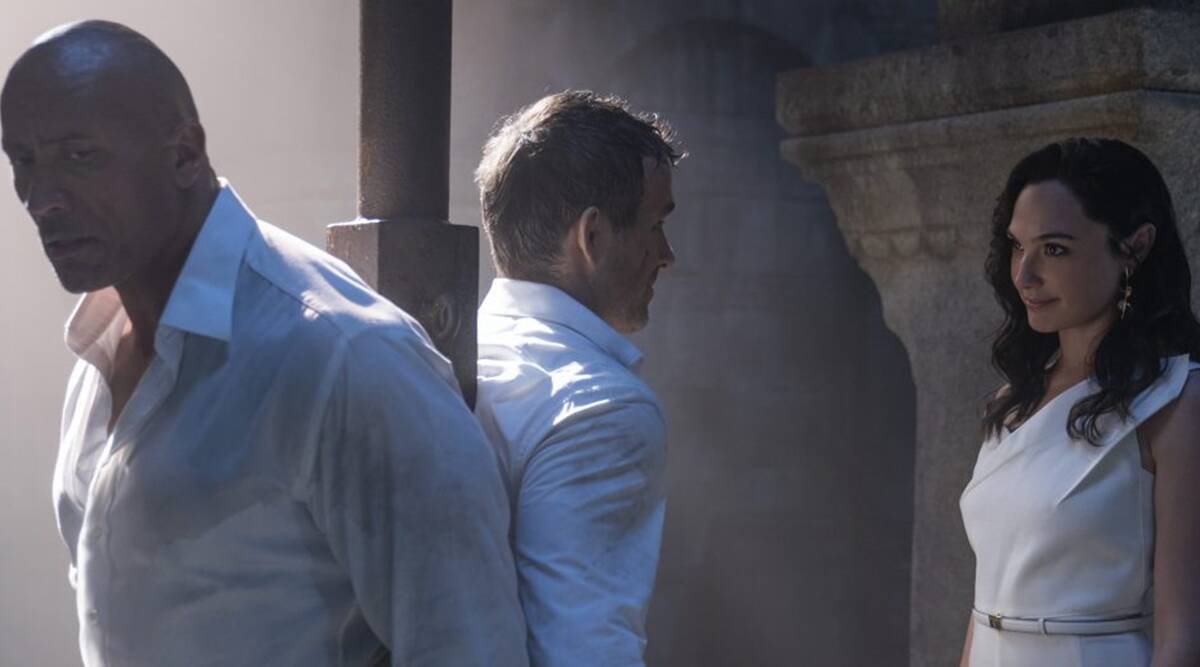 I’m loathe to really kick Red Notice for its flaws and faults, which are numerous, when I’m more inclined to recommend the film purely for the joy of watching Ryan Reynolds spar with Dwayne Johnson on both a verbal and a physical level. I know, Reynolds’ particular brand of comedy seems to have jumped the shark and worn out its welcome in some quarters, but between 6 Underground and Free Guy (and Deadpool, obviously) the man knows his schtick works and by golly he goes for it again here. Cultural non-sequiturs, half-mumbled asides and variably humorous observations make for the majority of Reynolds’ character’s dialogue, probably mostly ad-libbed I’d wager, and I get where some of the criticism of the actor simply cruising through his part comes from. I, however, had fun with it, and I appreciate Reynolds’ particular sense of humour. Johnson, attestably more bulky and prone to brawny fight sequences, delivers the gags he’s given well enough, and augments the muscle of the film’s action sequences where required with the consummate professionalism he’s known throughout the industry for. Gadot, for her part, lacks the charisma to really take it up to either of her male counterparts, instead vamping gloriously on her good looks and the costume designers’ idea of sultry dresses (which are, actually, sultry), delivering pretentiously overwritten dialogue with the panache of an actress knowing she’s just there for her looks. 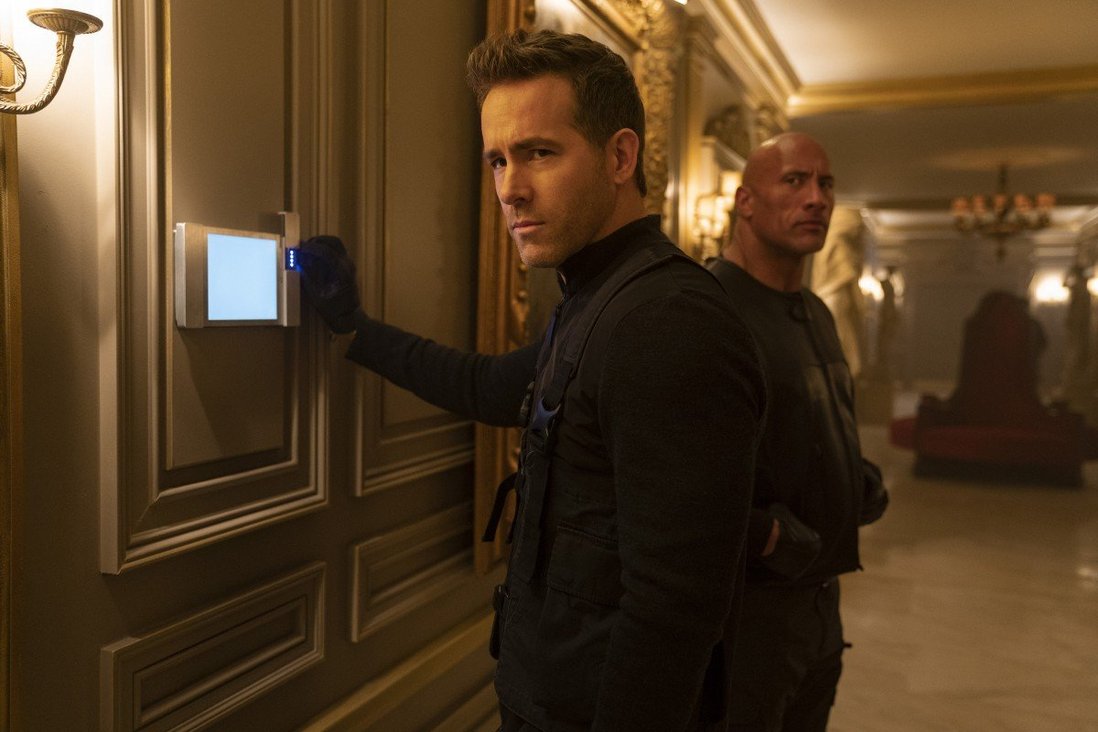 Thurber’s direction is amenable to the story and the stars’ best angles, making everyone look as good as possible while maintaining a sense of momentum and exuberance for what passes as plot in this. Each action sequence feels fluid and dynamic despite bordering on absolute insanity, which is part of the fun. Deafening sound design and Steve Jablonsky’s pounding score offer a speaker-testing surround audiofield, Markus Forderer’s oversaturated cinematography replicates the look of a late-90’s Joel Silver production, and editors Michael Sale and Julian Clarke maximise the violence and chuckles with hyperkinetic cutting around the laughably ludicrous action; it’s all nearly wrapped in a CG-infused bow and dropped into the audience’s lap without an explanation at all. The movie also absolutely refuses to treat the audience as anything other than simpletons; plot exposition is exactingly obvious, every twist and turn espoused by Reynolds’ dithering Nolan Booth, and the action is as hard-PG13 as is possible to get for all the death-defying stunts. But I did laugh (does that make me a simpleton?) more than enough to justify my Netflix monthly fee, which makes this a net positive in my book. 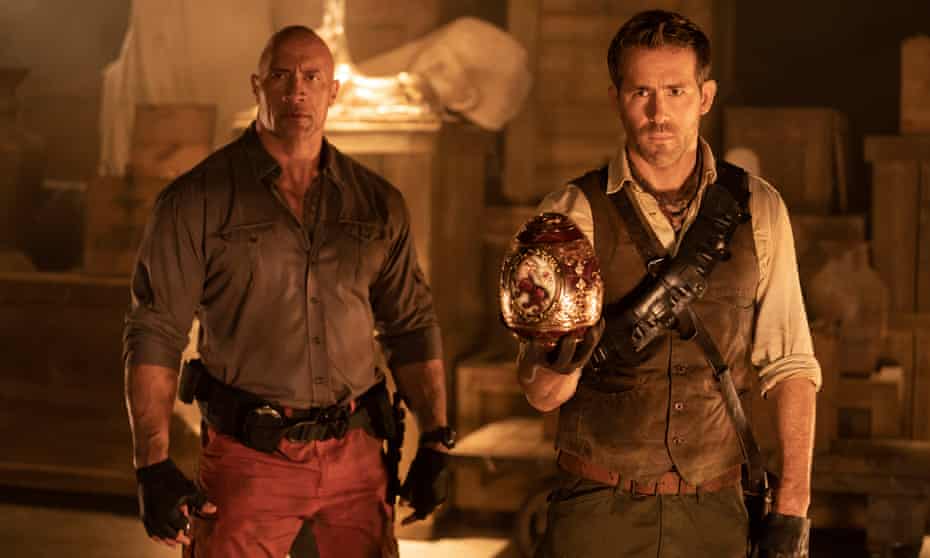 Red Notice (not to be confused with the similarly titled Netflix film out of the UK that was absolutely awful, and retitled here as SAS: Rise Of The Black Swan) is inexplicably stupid and astoundingly simplistic but I had a whale of a time enjoying the mindlessness of it all with a burger and coke for tea. Inoffensive, swaggeringly masculine, derisively asinine at times, Red Notice is imprudently injudicious with quality control scripting and layers the chemistry of the main trio with as thick a covering as is possible. Settle back with a bucket of popcorn and enjoy it for what it is. Expecting it to be something it so obviously isn’t is the fast road to ruin.