Known as SAS: Red Notice in its home country of Britain, Magnus Martens’ feature film adaptation of the 2021 Andy McNab novel of the same name (although inexplicably retitled here on Netflix Australia as Rise of the Black Swan, a far more approachable appellation) is a clunky, awkward and ultimately forgettable action potato. Boasting the talents of Outlander hunk Sam Heughan, Aussie actress Ruby Rose, Ant-Man co-star Hannah John-Kamen and Gollum himself, Andy Serkis, SAS: Rise of The Black Swan lurches between unexciting action setpiece after setpiece, with quite a high body count, before swinging for the fences in a climax torn right out of Brian DePalma’s original Mission Impossible and McTiernan’s Die Hard With A Vengeance. Comparisons with those two action classics is perhaps disingenuous, for Rise Of The Black Swan is nowhere near the quality of either of them. 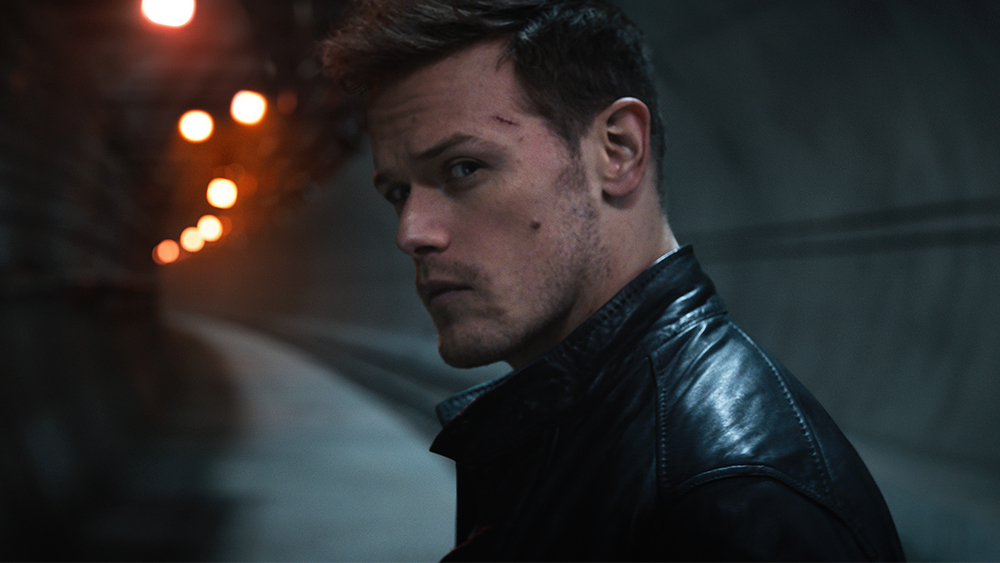 A family of mercenaries, led by patriarch William Lewis (Tom Wilkinson), son Oliver (Owain Yeoman) and daughter Grace (Ruby Rose) are paid by the UK Government, under the auspices of Commander George Clements (Andy Serkis in fine vicious form) to dispose of a Georgian village to allow a gas pipeline to be constructed through the European East. After a video of the murderous atrocity surfaces, Prime Minister Atwood (Ray Panthaki) orders the capture of the Lewis family and sends the SAS, including operative Declan Smith (Tom Hooper) and his associate, the incredibly wealthy Tom Buckingham (Sam Heughan) to carry out the mission. After the mission partially fails, Grace and her brother resurface aboard the Eurostar train – the main mode of transport between the UK and France, beneath the English Channel – and hijack it. Coincidentally, also aboard the train is Tom and his girlfriend, Dr Sophie Hart (Hannah John-Kamen); the pair become involved once the train is brought to a halt and the plans of Grace and her gang of armed thugs begins to play out. 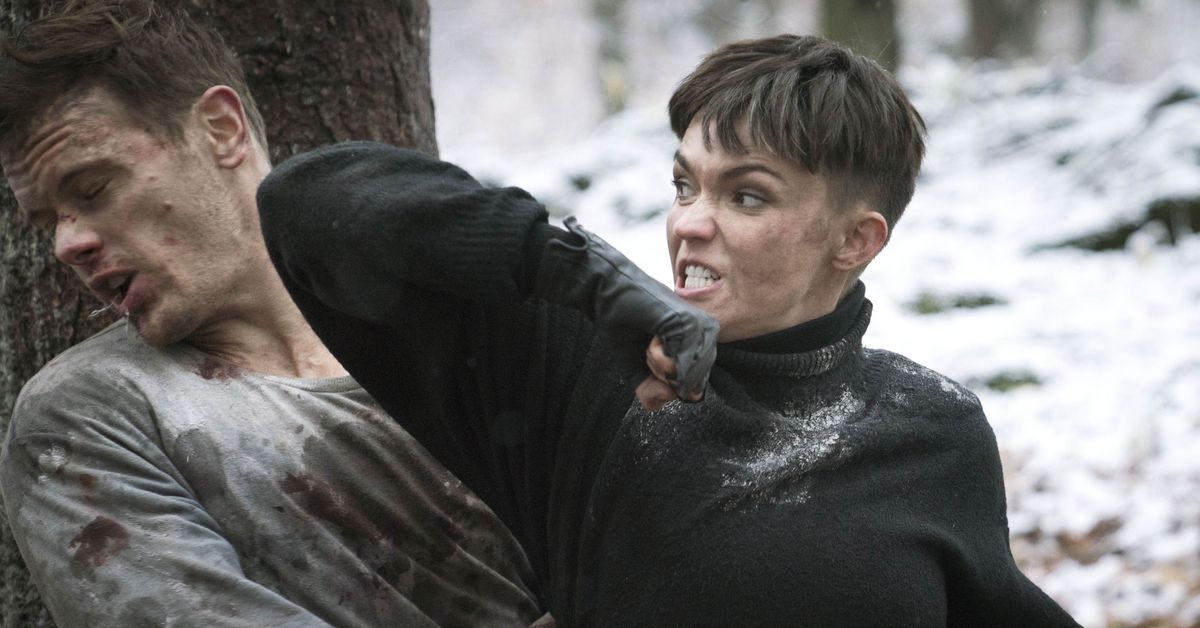 Rise Of The Black Swan begins portentously enough: a voiceover dedicates several minutes of screen time to describing what a psychopath is. Psychopathy is explained as the ability to turn off one’s emotions (or leave them off permanently) and people afflicted with this condition are often prone to lives of incredible loneliness or isolation. Rise Of The Black Swan, however, attempts to turn psychopathy into a superhero trait, flavouring the emotional disconnection with the same idealism that vampirism was depicted in the Twilight Saga – sexy, inviting, and made to be broken. Psychopaths operating on a different level to everyone else – the subtext of psychopathy is often prevalent in the books of Andy McNab (a pseudonym for writer Steven Mitchell, a former British Army soldier), with the writer himself claiming to actually be one as well, and having written a book about the condition there’s every likelihood he’s correct. Anyone who’s ever served in the military has often had to come to grips with guilt and survivor’s grief if they’re unable to switch off the horrors some are often forced to confront, and with respect to being psychopathic it’s perhaps the career of choice for people who can turn off their feelings in such a manner.

Sam Heughan’s character, the big-swinging-dick Capital-H hero of the film Tom Buckingham (if the story was based in America he’d have been called Steele McIronknob, natch), is depicted as a psychopath, able to disassociate between the casual murder of combatants on missions with the emotional complexity of everyday life with his girlfriend and doctor, Sophie. So too, Ruby Rose’s character Grace is also an emotionless freak, casually murdering countless dozens to accomplish whatever mission she’s on at any time; naturally, a hand-to-hand climax between Tom and Grace occurs in the film’s third act, all leaning in heavily on the fact that true psychopaths are rare and that their power of emotionless combat is a valuable commodity rather than something adverse or bad. When the pair eventually meet mid-film, the wide-eyed realisation that they are both cut from the same psychopathic cloth is a heavy-handed point the film goes out of its way to make, despite never really capitalising on the idea or developing it beyond a simplistic, swing-for-the-fences approach. 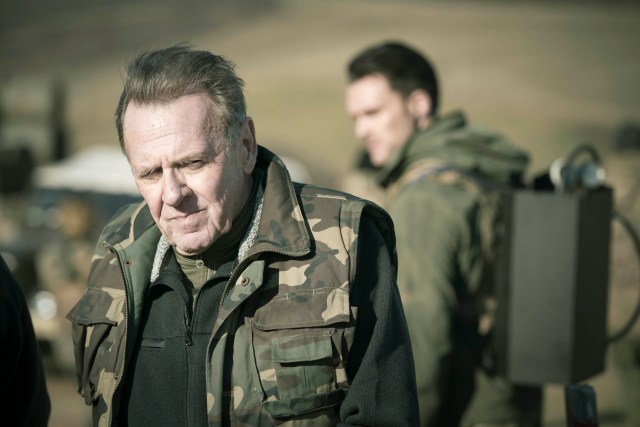 Indeed, the film is pretty ham-fisted throughout its entirety, lacking any real depth of character, or complexity of motivation or thought. In fact, Rise Of The Black Swan feels more like a feature film version of a long-running television show I haven’t seen. Remember when the first X-Files movie came out, but you had to have seen the previous seasons of the television show to make any real sense of what was going on? That’s how this film feels, only there’s no five or six years of character buildup beforehand to get a handle on who these people are. They’re just… there. The plot feels like we’ve come in in the middle of an ongoing story and there’s no handy asterisked comic panel telling us which issue we should go back and read to catch up. The script by screenwriter Laurence Malkin is insipid, really, with generic dialogue, hamfisted exposition and flat, lifelessly boring supporting players doing their level best to spiral this film off into catatonic ambivalence. For a film with the acronym SAS in the title there’s actually very little focus on the actual SAS, with the film spending a lot of time on both Tom Buckingham’s inability to understand why freezing his girlfriend’s dead cat is a shitty idea, or on Grace’s continued smarm to her brother for inexplicable reasons, rather than actually being a film about the SAS. Remember that 2012 action film Act Of Valor, which saw real-life Navy SEALs doing their stuff on the big-screen? This film feels like it should be more like that, but isn’t. 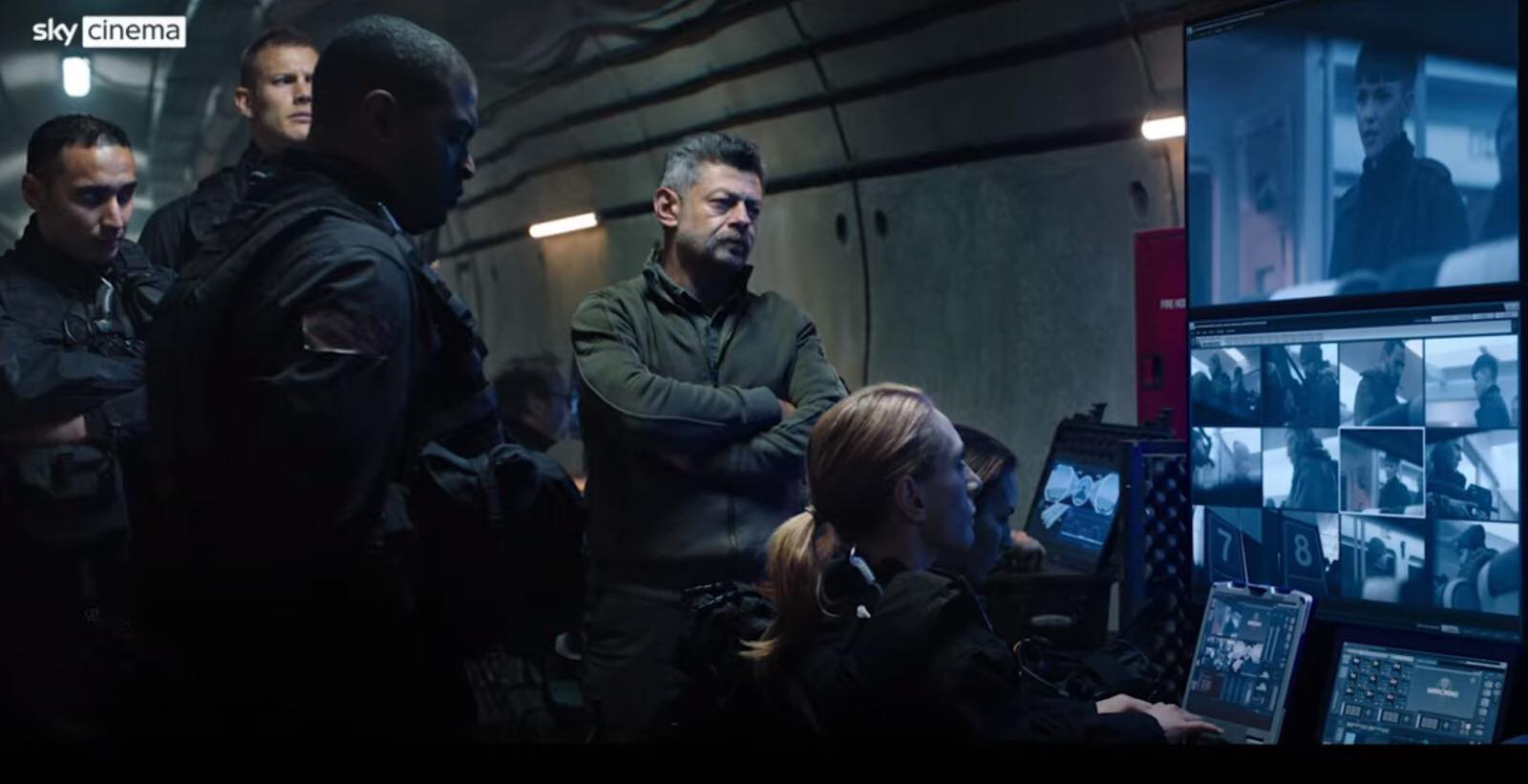 Heughan, sporting modern-day clothes instead of period UK costuming from Outlander, is chisel-jawed and just charismatic enough to portray the heroic Tom Buckingham, while his relationship with Hannah John-Kamen is weirdly distant; these two are supposed to be lovers but it looks like they’ve barely held hands or even looked at each other before the film kicks off, and their indifference physically can’t be overcome by either performers’ talent. Andy Serkis’ role of Clements feels like somebody we ought to know more about in terms of character motivation, but the film avoids giving us any and turns a potentially compelling overlord-style character into a one-note cheese-grating scenery-chewing asshole that fails to resonate. To be honest, he’s barely a step away from reprising the role of Ulysses Klaue from the MCU had he snarled a little more. Ruby Rose, an actress who needs to choose her roles more carefully – maybe she shouldn’t have chucked the Batwoman show away, Lord knows – plays Grace with a sense of showmanship but again her acting prowess isn’t strong enough to really zing. Her ferocity and ice-cool demeanour work well enough, but the film’s climactic fight sequence, in which she’s asked to actually emote just enough to let us know she’s at least a little human, is indicative of her wooden screen presence and acute inability to feel natural with line delivery. Against Tom Wilkinson, who plays her father in the opening act, Rose is truly an anti-actor, but at least she tries. Spotting Noel Clarke, Anne Reid and Owain Yeoman in thankless roles is enjoyable enough but the film wastes their respective talents entirely. 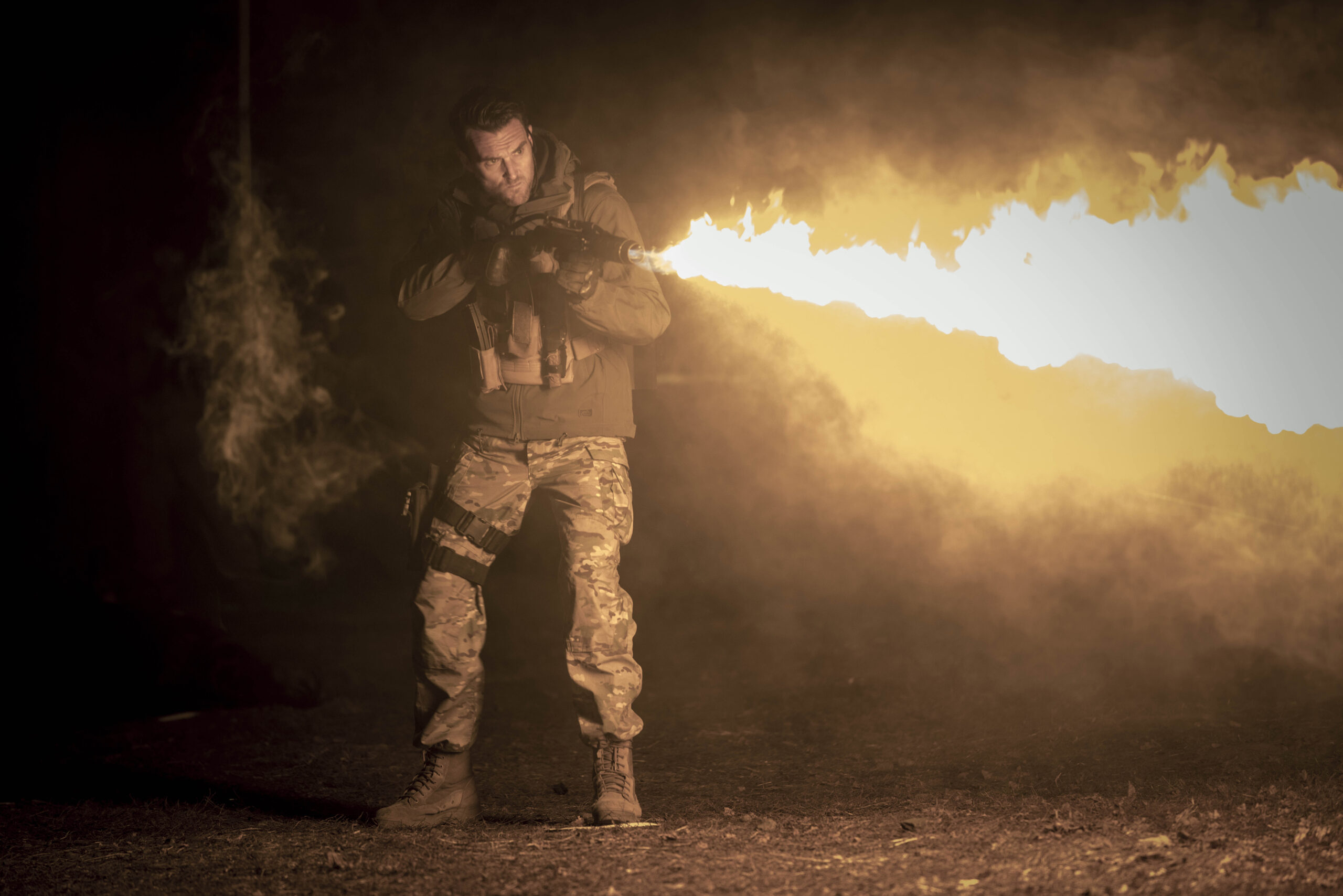 In terms of action and thrills, director Magnus Martens (from what I can gather from his IMDb page, this is his first major feature film, having transitioned from television series such as Banshee, The Walking Dead and Good Behaviour) can’t really muster up much at all. The various gun-battles that occur throughout are frantic and violent but weirdly unengaging, the hand-to-hand combat is laughably cartoonish and poorly staged/choreographed, and the whole Under Siege vibe (itself a Die Hard clone) feels poorly assembled and half-heartedly delivered. Overall staging is generally good – at least the film doesn’t have an overabundance of hand-held shaky-cam to contend with – and the production value seems on-point, so at least in a technical sense there’s much to enjoy here. The cinematography by Aussie-raised DP Nick Remy Matthews looks luscious and crisp, whilst the musical accompaniment (from composer Benji Morrison) is decidedly downbeat and the antithesis of modern action stylings. Yet there’s an intertial stagnation at play, a two-steps-forward, one-step-back feeling of inadequacy in both script and direction to make this a truly thrilling espionage action film or a study in human psychopathy; Rise Of The Black Swan seems to be of the same emotionless void as the two central characters. Perhaps that was the intent. 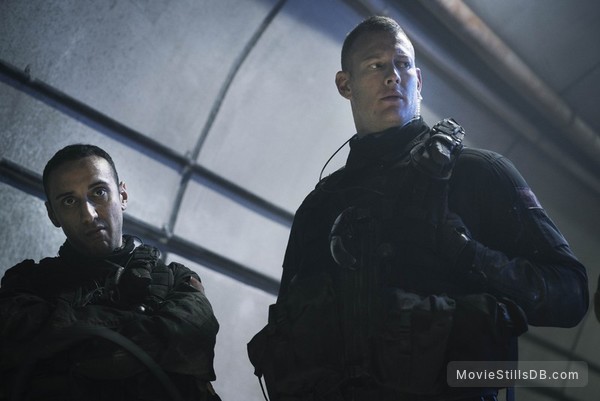 SAS: Rise Of The Black Swan is risible cartoon violence and double-and-triple-cross plot conniptions linked by ganglion performances and earnest but laughable writing. The makings of a great action film are buried beneath cloying dialogue, generic characters and stupid, nonsensical idolisation of a human trait most people equate with serial killers, and that’s not something the film can overcome to take the sour taste away. As much as I love Hannah John-Kamen (her turn as Ghost in Ant-Man & The Wasp was one of that film’s better elements) she’s wasted in this drivel, whilst if Sam Heughan wants to make it as an action star – and he has the looks for it, at least – he needs to choose better vehicles to accomplish it. Rise Of The Black Swan is hardly unwatchable, but the longer you sit with it the less interesting it becomes. For me, it’s yet another Netflix film that fails to live up to any potential whatsoever.