Principal Cast : Anthony Mackie, Damson Idris, Emily Beecham, Michael Kelly, Pilou Asbæk, Kristina Tonteri-Young.
Synopsis: In the near future, a drone pilot sent into a war zone finds himself paired with a top-secret android officer on a mission to stop a nuclear attack.

With a serviceable script and some rousing, albeit confusing action sequences, Mikael Håfström’s futuristic actioner delivers a forgettable matinee-movie story threaded through above-average visual effects and a cacophonous essay on military jurisprudence. Led by MCU stalwart Anthony Mackie and a hugely competent Snowfall actor Damson Idris, Outside The Wire pumps up the frantic camerawork and jittery framerate but can’t escalate more than a mild raising of the viewer’s pulse as it slips from intriguing opening act to wobbly sci-fi trope-twisting finale. 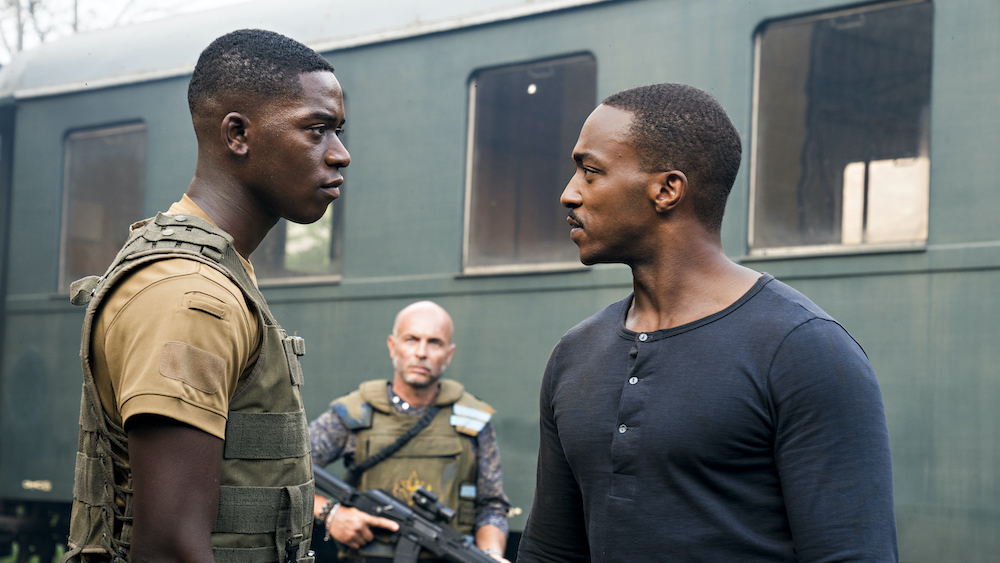 Idris (The Commuter) plays USAF Drone Pilot Lt Thomas Harp, who, after disobeying a direct order, is sent by the powers-that-be to a war-torn Ukraine, where he meets android officer Captain Leo (Mackie), and is tasked on a mission to deliver vaccines to civilians whilst covertly locating a mysterious Russian terrorist named Victor Koval (Pilou Asbæk – Overlord, Game of Thrones). Koval, it seems, is seeking control of nuclear missiles formerly controlled by the now collapsed USSR, something resistance leader Sofiya (Emily Beecham – Hail Caesar!) is desperate to avoid. As Leo and Harp track Koval down, the body-count starts to rise and Harp soon discovers that Leo isn’t everything he seems to be.

Written by Rob Yescombe and Rowan Athale, the subtlety of Outside The Wire unravels quite early on. At first it’s one of those “sent to learn a valuable lesson” military films where the upstart young lieutenant finds himself under the command of an arrogant and/or abusive superior officer, before the young lad learns his lesson and becomes the man we all know he is capable of becoming. Sadly, this film takes that premise and squishes it within a muddy, diffuse subtext of “war is hell” and an oblique dialogue of what constitutes acceptable losses, without a shred of nuance to back up its raucous backdrop. Shoehorning in a Euro-trash setting and dystopian semi-future realism – the film is set in Ukraine in 2036 – and outright stealing design work from Neill Blomkamp’s Chappie for the thunderous “robot soldier” ubiquity involved, Outside The Wire offers flashy action and perplexing choreography without the intelligence to accommodate the on-screen posturing. 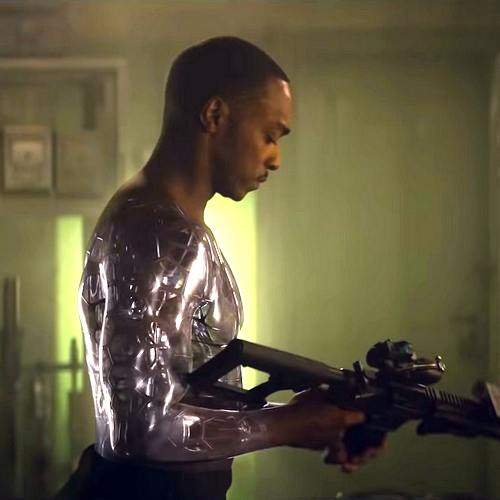 The script aims for “smart” but misfires, with either the actors – all of whom try their mightiest here – or the direction unable to adequately congeal the various plot points into something emotionally saleable. Images of innocent civilians (bless them, they largely avoid having children appear in this slaughterhouse) being caught in various crossfires, dilapidated and shelled city buildings and a variety of slum tenements seem to be made to stand in as a visual shorthand for how dire the situation of the plot is, even if the dialogue can’t manage that on its own. There’s talk of nuclear weapons and the military weaponry on display throughout really isn’t that much more advanced than what we have now (it seems the “robot soldier” motif futurists constantly worry about today are little more than walking, twitching and utterly useless cannon fodder), and the use of drone tech some fifteen years into our future appears to have stalled back in 2016 for all the freshness it brings to the screen; the script is a half-hearted affair with misaligned focus that can’t manage to generate much enthusiasm. It is supposed to be a “robot gone wrong” story? A military oversight run amok fable? A collateral damage analogy? Outside The Wire isn’t particularly clear at any point until we get to the overly cliched climax, whereupon the storytellers decide to go all philosophically Asimov on our asses without having first earned the privilege. It should also be said that the film’s third act “twist” isn’t that jaw-dropping, and the film badly mishandles this moment. 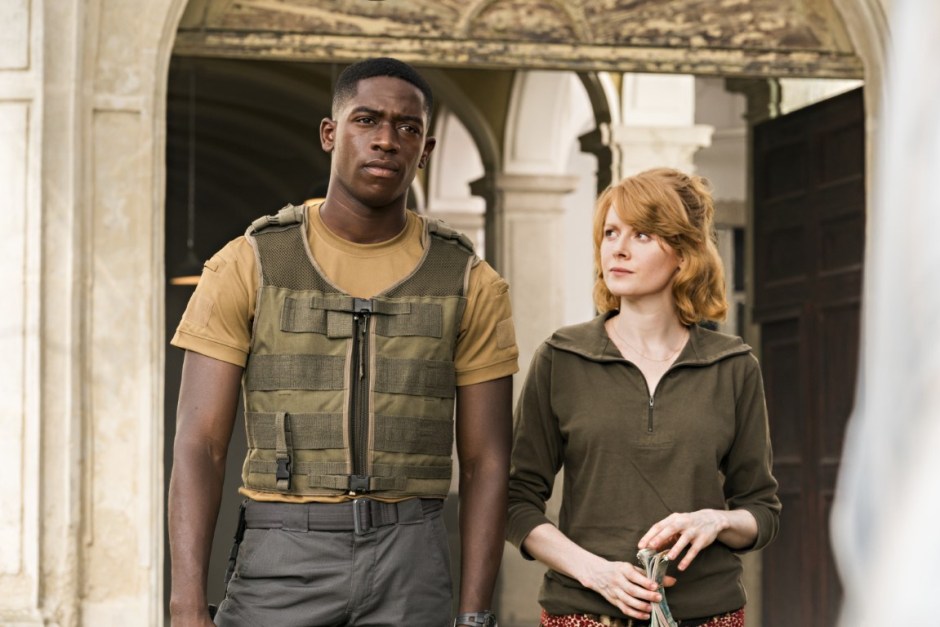 Global audiences are well familiar with lead actor Anthony Mackie, with the man making a name for himself as Captain America’s loyal offsider Falcon in the Marvel Cinematic Universe. Mackie offers a similarly square-jawed approach to this role, that of a cybernetic being far more advanced than “artificial intelligence” – something Leo scoffs at being equated to – but whereas his MCU role requires a little wink and smile behind the serious cosmic destruction, here there’s absolutely no room for humour. Mackie also lacks the gravitas to usurp his light-hearted screen persona to play a dead-set hardass, although he tries hard and generally gets the job done. His action sequences skip between raggedly brutal and comically over-the-top (a shoot-em-up sequence between he and Koval, late in the film, is laughably stupid) and you never quite get a handle on just what the purpose of his character was always intended to be. As far as I can tell, the purpose of Captain Leo was to be what this story needed rather than an accidental hero-type, made for the story rather than being drawn into it organically.

Co-star Damson Idris, as Harp, has a more evocative character arc and owns most of what little emotion the film offers. To be fair, the actor comes off well, given the dearth of material he is given, with a performance intensity akin to that of Daniel Kaluuya’s best work and a physicality matching his characters’ relatively inconsequential combat experience. The film focuses on Idris’ character to a fault, and when he’s on the screen you can’t help but be drawn into his internal and external conflicts. Less is the case with Mackie, sadly, although not for both actors giving it their all. Bit parts to Emily Beecham as a Ukraine resistance fighter, Michael Kelly as a USAF Colonel, and Pilou Asbæk as the nexus of evil in Koval, add to a useful (if bland) cast, with nobody else offering much past simplistic and generic stereotypes. 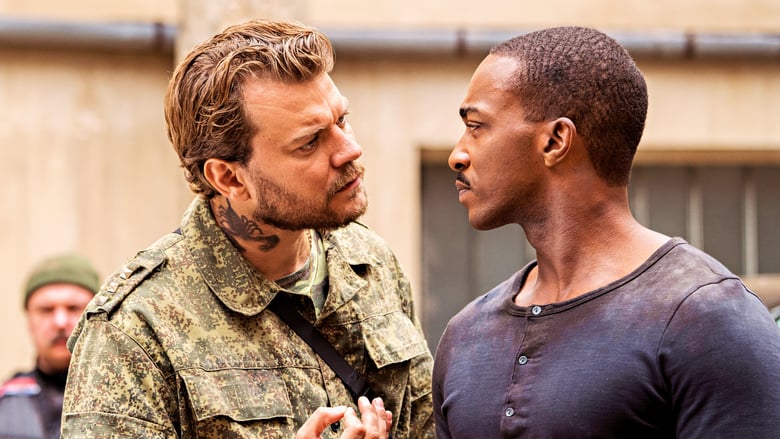 In terms of production, the film feels expensive with its use of visual effects – notably, the Chappie-style urban robotic soldiers (called Gumps) are the film’s most visually appealing creations, whilst a brief early sequence where we see inside Mackie’s artificial Captain Leo is well done, if underused – and the production appears to have made the best use it could from practical locations near Budapest, but drab cinematography by Michael Bonvillain, echoing similarly monochromatic work by Spielberg (Saving Private Ryan) and Ridley Scott (Black Hawk Down) turn this energetically shot actioner into a grimy, mud-splattered chore. The editing by Rickard Krantz turns well-staged sequences of carnage into an orgy of indiscernible squib rounds, exploding buildings and bloody viscera, lamenting coherence in place of digital frame-shaking and high-speed-shutter overkill. Lorne Balfe’s electronic score is up to the challenge, providing requisite energy during the action and suitably melancholy motifs when “story” comes along. 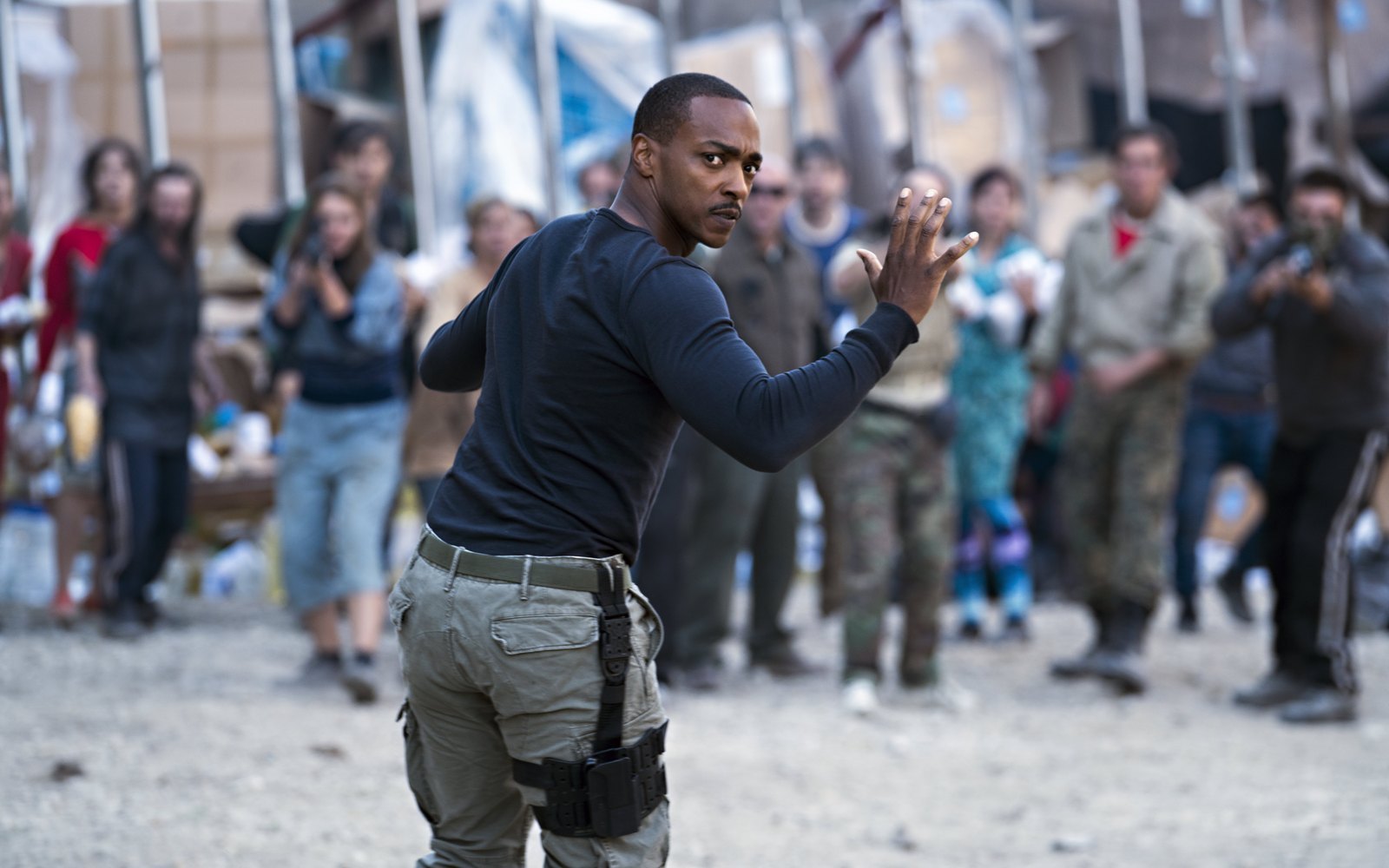 1408 and Escape Plan director Håfström has made a film that is desirably heady in action yet demonstrably deficient in something Mackie’s android character lacks – soul. There’s elements of admirable character work here but Håfström hasn’t the ability to make it truly click, blinding us with showmanship that papers over some rather large cracks. Unfortunately, Outside The Wire won’t linger long as either an action film (it’s too ponderous) or a think-piece about military power and warfare (it takes itself way to seriously), but as a diverting piece of entertainment to waste a couple of hours I guess there’s worse out there. Recommended for hard-core action junkies but casual viewers will find better alternatives if they look.