Boasting a boilerplate plot and stoically grim-faced Liam Neeson leading performance, 2018’s The Commuter is diverting enough action fare to commend, if unremarkable in its execution. Neeson, whose career post-Taken has lurched from one tough-guy flick to the next until even he suggested he’d “retire” from the genre (to no avail, apparently), is his typically charming self throughout this brisk sub-two hour action thriller, which pits his ex-cop character up against a ticking clock premise to locate a fellow train passenger to snag a life-changing amount of cash. It’s a plot that doesn’t dwell on the subtleties of human existence, that’s for sure: what The Commuter does well, however, is deliver crowd-pleasing entertainment of the sort now associated indelibly with Neeson, an archetypal “good guy in a bad situation” trope that’s hammered home for all its worth. 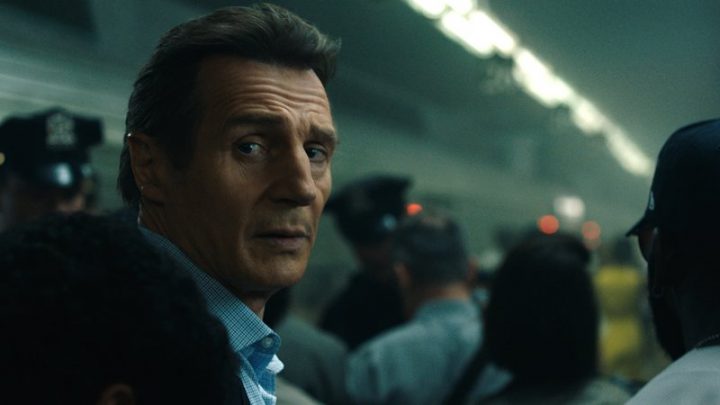 Neeson plays ex-cop, now insurance salesman Michael McCauley, who commuted via passenger train from his home out of the city to his work. After suddenly being fired, Michael is on his way home to tell his wife (Elizabeth McGovern – Kick-Ass, Woman In Gold) and son (Dean-Charles Chapman – Before I Go To Sleep, Game Of Thrones) when he meets a fellow passenger, Joanna (Vera Farmiga – Up In The Air, Source Code), who offers him a substantial amount of money for locating a passenger aboard the train “who does not belong”, named Prynne, and attaching a tracking device to the bag they’re carrying. Michael is initially sceptical, until a bag of money turns out to be legitimate, and his family’s lives are at stake. Michael contacts his friend and former colleague, Detective Luietenant Alex Murphy (Patrick Wilson – The Conjuring, Insidious), and new police Captain David Hawthorne (Sam Neill – Jurassic Park), and searches for clues about his fellow passengers to locate the mysterious Prin before his wife and son are killed. 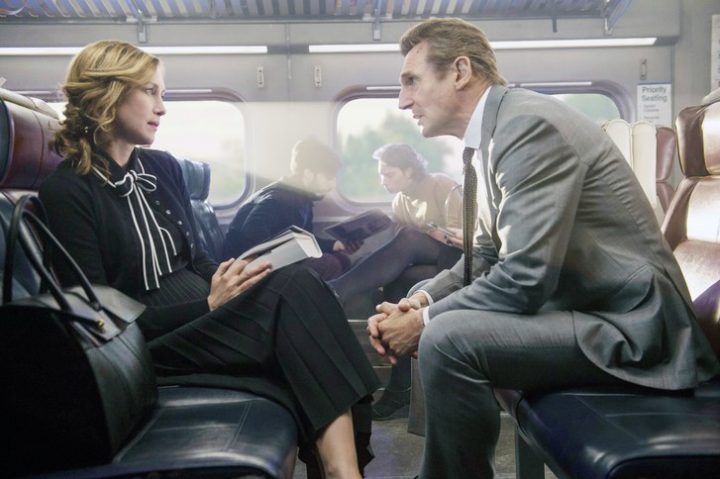 When I first heard about The Commuter, I had reasonably high hopes. The film re-teams Liam Neeson with directorial muse Jaume Collet-Serra, with the pair working together on previous genre films Unknown, Non-Stop, and Run All Night. Competent, if not entirely entertaining feature films from the pair have always eventuated, and I figured The Commuter, while being bog-standard action fare, might be a decent night at the movies. I wasn’t wrong. Collet-Serra’s film is an energetic, well made and utterly engaging thriller flick, featuring bland supporting characters swirling around Neeson’s star power and some very iffy visual effects (and by iffy, I mean occasionally terrible). 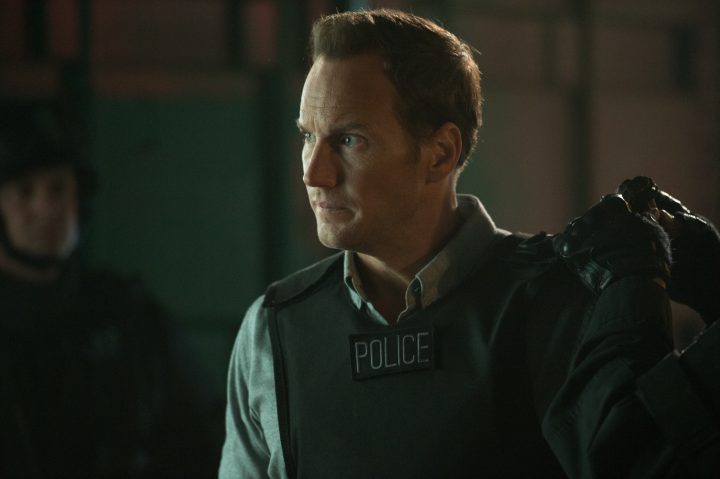 The screenplay’s bulging mandate to invest the audience in Neeson’s characters’ plight is simple: make him empathetic, give him a motive to participate, and throw every curve-ball possible at him whilst on a moving train. It’s a film of ducks-n-drakes, of shadows and red herrings, a film with as many twists and turns as a lightweight thriller like this could offer, although it’s all played mostly for fun. Neeson’s Michael McCauley is a carbon copy clone of every other tough guy the actor has personified in the last decade or so (with the exception of having a particular set of skills, because here he’s basically a middle-aged former cop running purely on instinct and adrenaline and little else) and aside from being stuck on a train, as opposed to Non-Stop’s plane, his role is simply to provide the plot with forward momentum using charisma. Of which Mr Neeson has plenty. It’s the exact kind of role you’d swap in for a Jason Statham or an 80’s Stallone; tough guys who know how to kick ass and take names when placed in pressure-cooker situations. 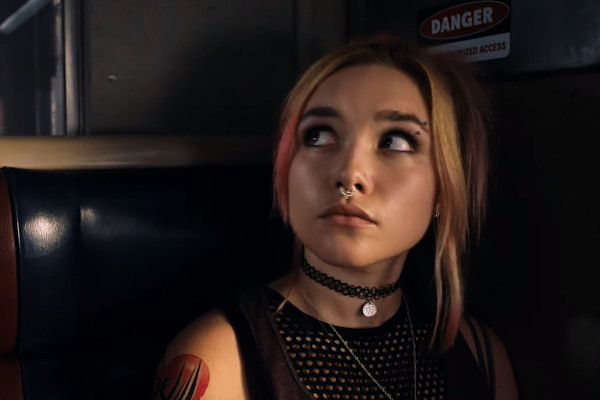 With the character set up, and Neeson’s place on the train put into motion, enter Vera Faramiga, who sparks the conflicted plot with a simple menacing conversation. She’s then pretty much out of the film from there, consigned to being a disembodied voice at the end of the multiple phone conversations which drive much of the film’s plot mechanics. Patrick Wilson shows up as an old buddy of Michael’s, Sam Neill as the hard-assed new police chief, and a smattering of nice acting talent portraying the cluster of fellow train passengers and staff caught up in this wily game of cat-and-mouse. Jonathan Banks (Beverley Hills Cop, Breaking Bad), Florence Pugh (Lady Macbeth) and Andy Nyman (Automata) are among the gathering here to support Neeson’s sweaty, bloody parkour course of a film. The story’s central mystery is the identity of Prynne (are they a male or female, old or young?) and the MacGuffin involves information he/she is carrying as the witness to a murder, and as the film progresses Michael must work out how to turn the tables on the people involved in trying to silence them. It’s not a particularly unique story, the setting isn’t especially fresh, and the almost none of the characters involved have depth beyond their roles as fodder for Neeson’s character to work through the mystery, but in its most simplistic form, The Commuter works.

The film is ably assisted in being entertaining through Collet-Serra’s adrenalised direction. The film’s strength is keeping the audience guessing once the plot is set in motion; through a variety of clever camera tricks and some wayward visual effects (and a fair chunk of obvious green-screen, it has to be said), the director imbues his film with cheesy, B-movie charm and style. The low-fi setting and continued presence inside the train’s carriages until the climactic third act prevents the film’s scope to solidify – a lot of stuff occurs out-of-frame in terms of ancillary storytelling – and this sense of frustration seeps into Neeson’s gruff, paranoid performance. A delightfully overblown train derailment towards the film’s conclusion is handled with all the crash-wallop-bang Hollywood can muster (even if the CG train kinda looks like a tinker toy as it flies through the air in pieces), and the requisite fight sequences, gunplay and general antics you’d expect to find in a film this clunky do serve their purpose. It’s not perfect, and the film threatens to come apart at the seams when striving for high octane camerawork, but commitment to the material and a freewheeling style by Collet-Serra elevate a film that might otherwise have totally sucked. 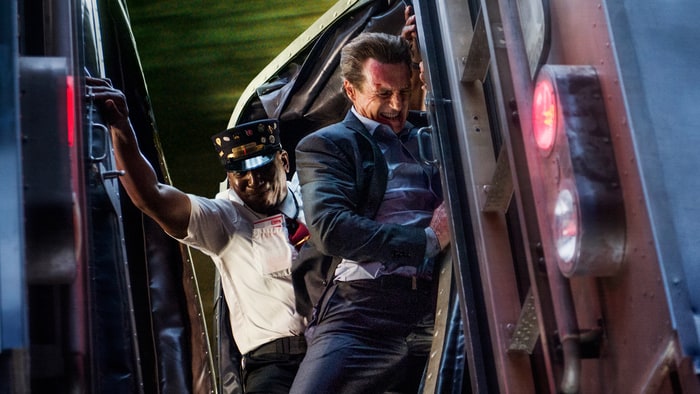 Although nowhere near the cathartic work he enjoyed in Schindler’s List, Liam Neeson’s The Commuter is solidly enjoyable junk cinema that’ll pass a lazy hour or two without subjecting you to too much thought. The film leaves no mystery unsolved, wraps everything up in a nice bow, and explains each step so that even the most obtuse can understand it. Perhaps that’s why I enjoyed it so much. These are perfectly adequate kinds of films, and The Commuter’s adequacy isn’t diminished by various faults one might find. Trashy like few others, The Commuter is a train-ride you’ll have a blast with, even though it won’t remain in your brain long after you’ve seen it.