Principal Cast : Boris Karloff, Warren Hull, Jean Rogers, Alan Baxter, Samuel S Hinds, Hobart Cavanaugh, David Oliver, Ward Bond, Frank Reicher, Edwin Maxwell.
Synopsis: The inventor of a burglar alarm attempts to get back at the man who stole the profits to his invention before he goes blind. The device is then subverted by gangsters who apply pressure to the inventor and use his device to facilitate burglaries.

Semi-interesting crime caper is aided by a wonderful turn by Alan Baxter alongside star Boris Karloff (Frankenstein, The Mummy) in what turns out to be a fairly brisk escapade of simplicity. A man best known for his work as big-screen monsters becomes the victim of his own brilliance as the vengeful David Mallory, a scientist who invents an ingenuous way of avoiding the latest of building security measures and upends the city with his antics. The film clocks in at a sprightly 68 minutes, including credits, so it doesn’t outstay its welcome, but a shoehorned romance subplot (which, let’s face it, is part of the Hollywood mandate) and iffy supporting turn by Hobart Cavanaugh threaten to undo a lot of the good work here. 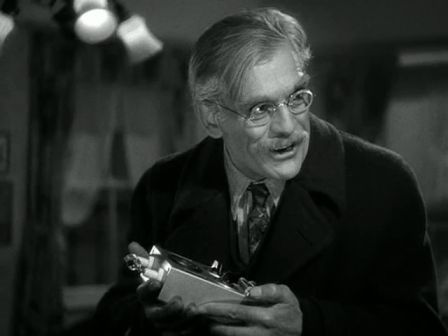 Karloff plays David Mallory, an ageing inventor who harbours a grudge against ruthless businessman Stephen Ranger (Samuel S Hinds), accusing the man of cutting him out of hit patents for a successful alarm system installed in nearly every major enterprise in the city. Mallory has now invented a new security system, but after a deal with Ranger goes south, Mallory threatens revenge, plotting to use his scientific ingenuity to ruin Ranger’s business. Caught in the middle are Mallory’s young daughter, Joan (Jean Rogers), a local petty thief Louie (Hobart Cavanaugh), and one of Ranger’s security forces, Jimmy Travis (Warren Hull). When local crime boss The Kid (Alan Baxter) gets a whiff of Mallory’s ability to circumvent the city’s security systems, he kidnaps the inventor and threatens to harm his daughter unless he assists the Kid’s gang rob everyone blind. 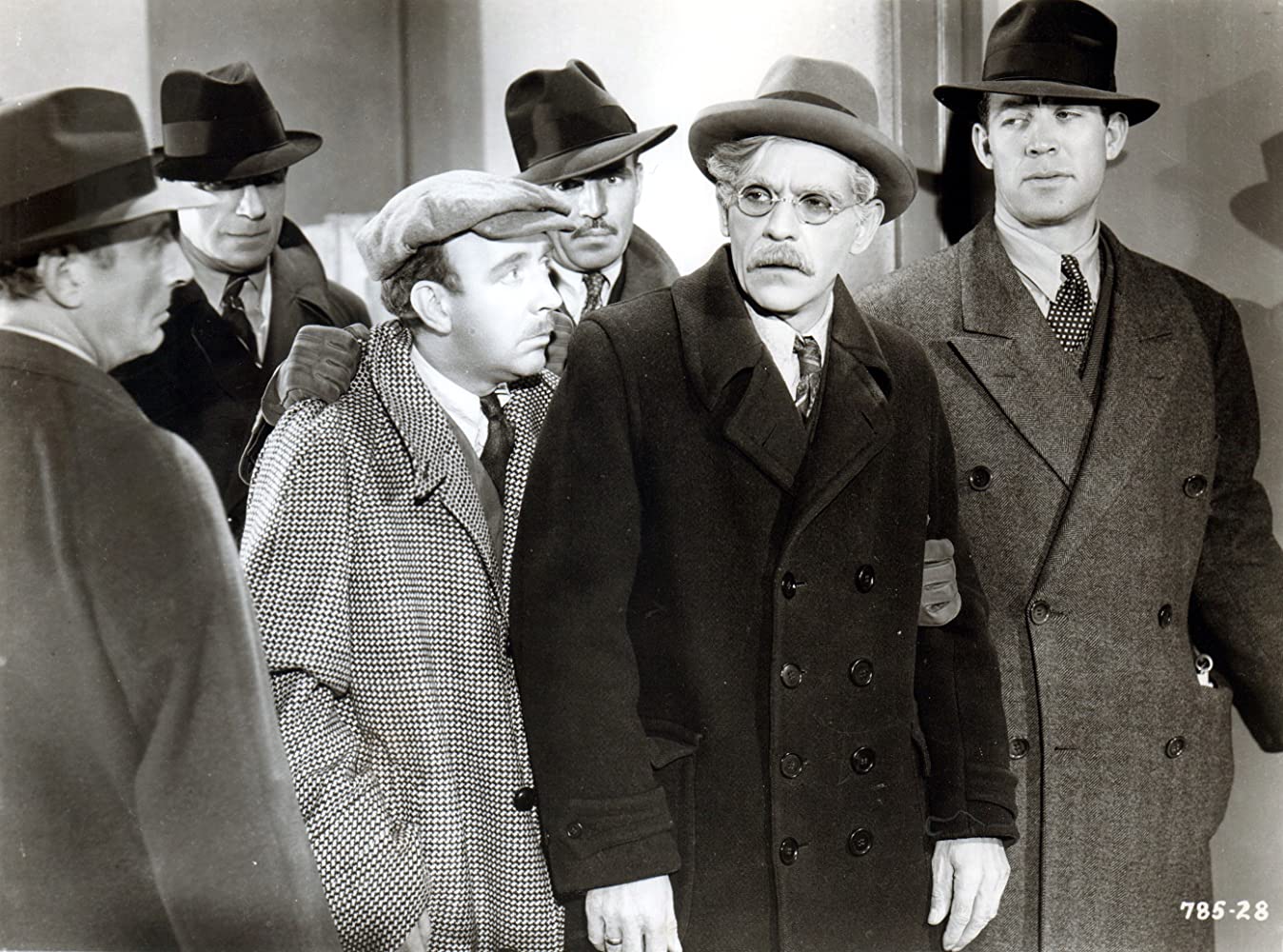 Lloyd Corrigan’s film is qualified as a “science-fiction crime film”; although in 1937 it must have seemed positively impossible to conceive of such convoluted security operations as the one depicted in Night Key, but by today’s standards it’s positively antiquated. Lest this steer you away from Night Key’s charms, there’s an old-world sensibility about the film I found charming, a throwback to when the future was indeed just that, despite it now being firmly rooted in the past. Karloff’s central performance is, if I can be blunt, decidedly downbeat, rooted in the character’s unstoppable impending blindness (exactly why this needed to be a part of the film’s narrative I still cannot fathom, but there you go…) and his own sense of mortality, but the master actor more than holds his own alongside a far better written supporting cast than I might have given this film credit for. 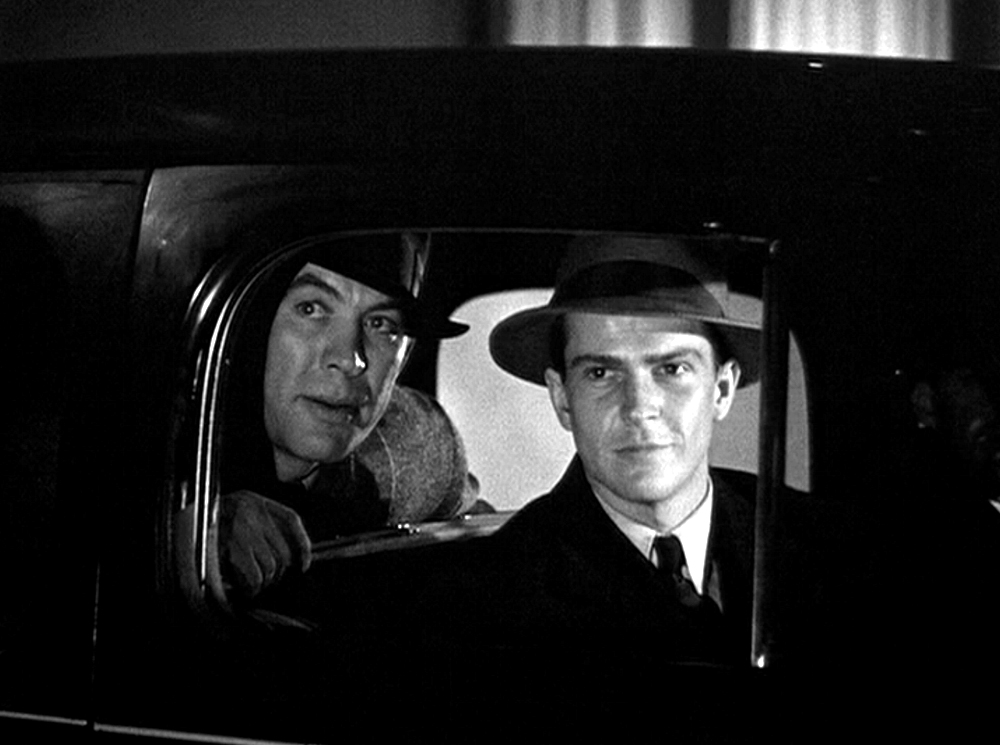 Written by Tristram Tipper and John C Moffitt, Night Key offers a fairly routine crime backstory and throws in the hilariously antiquated use of a device – a gag, as Alan Baxter’s Kid continuously refers to it – devised by Karloff’s Mallory to use short-wave signals to deactivate or obfuscate the installed security alarms at premises throughout the city (I assume it’s New York, although never specifically mentioned by name). The way the wealthy Ranger just rides roughshod over Mallory is quickly manifested in an early sequence, before Mallory’s sci-fi revenge is put into action, and the film doesn’t ever really slow down enough to offer much more than cursory development for any of the characters within. Karloff’s Mallory is a definitive downtrodden and underrepresented inventor schtick, whilst Baxter’s Kid is archetypal big-screen capital-G Gangster, complete with Bronx drawl and near imperceptible facial movement. Baxter, moreso than even Karloff, is the film’s most valuable player, and his addition in the third act really sets the story in motion. 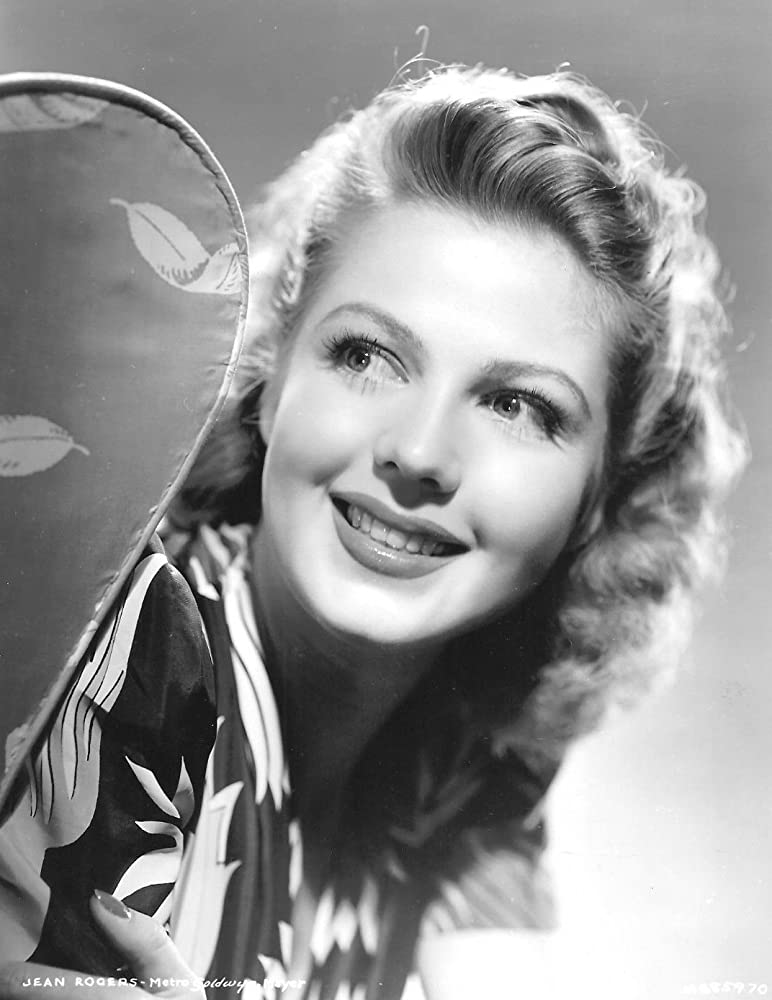 Until then, we’re dealt a lot of Mallory and his beautiful (yet entirely ineffective) daughter, Joan, played by screen siren Jean Rogers (Flash Gordon), alongside the increasingly clownish and entirely destitute comedic stylings of Hobart Cavanaugh’s dull-witted and simple Petty Louis, a local thief who befriends Mallory in an attempt to “get in” with the bigger crime gangs. Cavanaugh’s character is the obvious comedy relief here, a blindingly silly role rote with terrible sight gags and horrible delivery; it’s hard to know if the actor was asked to channel Dickins’ Fagin or not but he seems to be, and poorly. Hollywood serial star Warren Hull has the devil’s time making his square-jawed romantic interest for Joan work enough to make the film’s kissing-sequence finale work at all, but as a straight-man to a film filled with character work I guess he’s okay. And Sam Hinds, playing Mallory’s antithesis, has just enough swagger and smarm to make the part sing, and alongside Baxter he’s a worthy contrast to Karloff’s circumspect inventor. 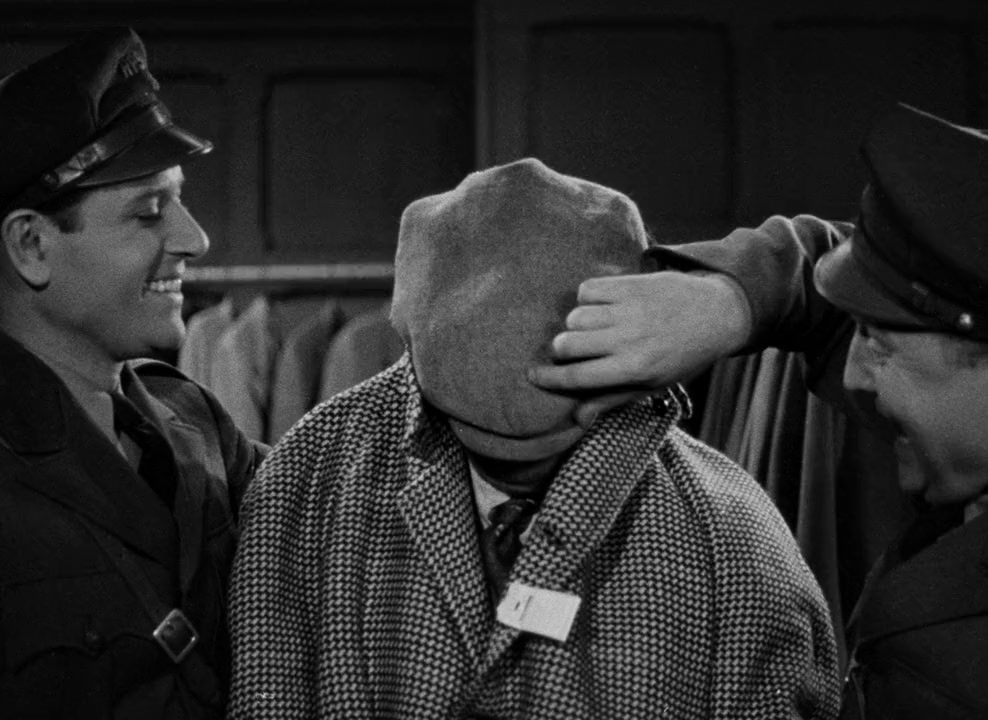 The title Night Key is derived from the anonymous character title used by Mallory to break into various city businesses, with his calling card the phrase “What I can create…. I can destroy” stencilled onto walls around the city. It’s the exact kind of noir anti-hero theme I’d expect from a film of this kind, although the concept of doing the wrong thing for the right reason is brushed aside in favour what becomes a fairly uninspiring cops-and-crime pursuit movie. The film bustles along at a rapid clip, using its brief running time to move the plot along superbly well, even having time to throw some red-herring twists in throughout, keeping the characters within off-balance. A last-act sacrifice by one of the key players feels tonally off-key to the rest of the film but works in spite of itself, whilst some fairly decent 1930’s special visual effects are actually quite convincing, despite the distance of decades between then and now. Lloyd Corrigan’s direction is tight, well balanced and in most respects masterful with framing, editing and use of his cast quite delightful. A car chase towards the film’s conclusion has the hallmarks of many a rear-projection gagfest but the practical stunt work on display should also not be overlooked. 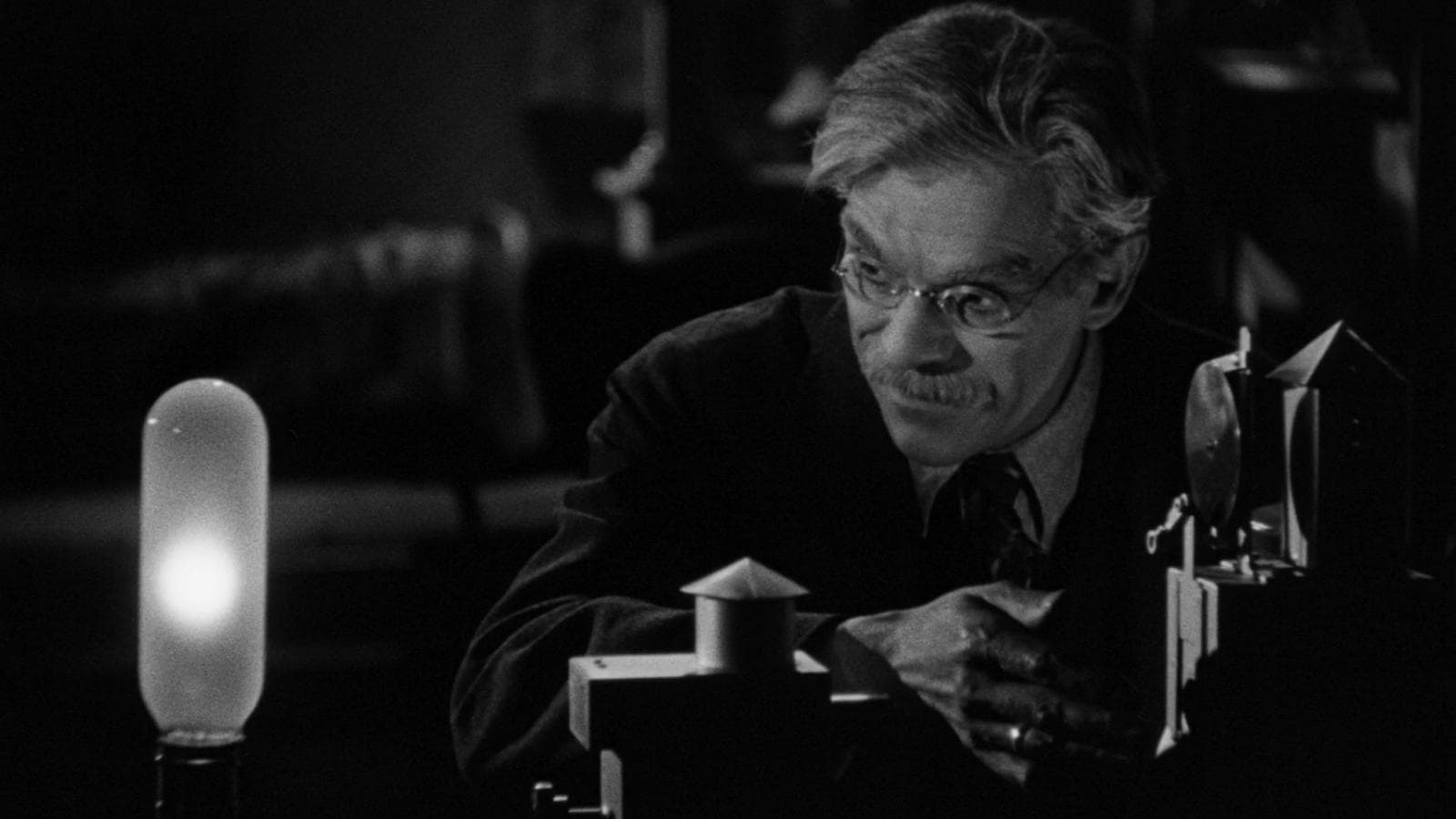 Night Key may not rank highly in the pantheon of Boris Karloff’s many films but it’s a worthy little time-waster that has a cool – if uninspired – story and several decent screen performances to enjoy. Offering not a single hideous horror icon in sight, Night Key will appeal to aficionados and Karloff completists but, I’d wager, few others, which is a shame, because it’s quite a cool little movie.