As much as I loved revisiting Bill & Ted’s Excellent Adventure, I found sitting through Bill & Ted’s Bogus Journey, the 1991 sequel to the original movie, a chore. Oh it had its moments, sure, but they were fewer and further between, with the film having a nastier streak and an overly complicated plot to contend with that I just felt went too dark. At times it bordered on stupid, to be honest, and while my kids cackled at the silliness of it all the fact that it took a different tonal pitch to the original caught me off guard and not in a particularly pleasant way. 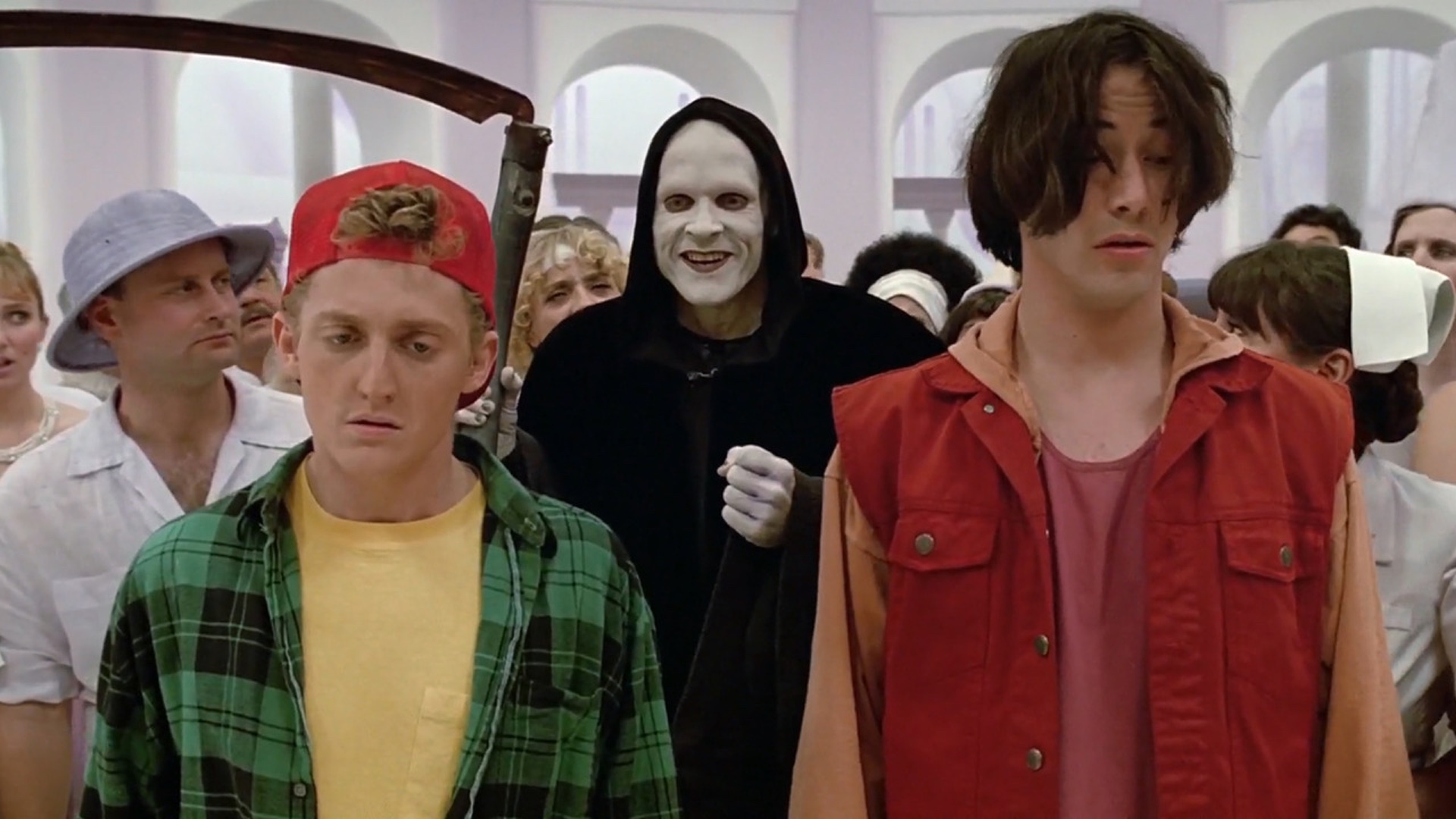 In the far future, the music of Bill & Ted, through their band The Wyld Stallyns, the Earth is a utopian society. However, one angry rebel, Chuck De Nomolos (Joss Ackland) has had enough, and intends to change the future for the better – he plans to send evil robot versions of Bill and Ted back to the past to wreck history. Attempting to stop him, Rufus (George Carlin) becomes lost in the circuits of time. When the Evil Bill And Ted arrive, they promptly kill off the real Bill and Ted by throwing them off a cliff, and return to San Diemas to break up with The Babes (Annette Azcuy and Sarah Trigger) and prevent the pair from winning the Battle Of The Bands, an event through which they will go on to world fame. Meanwhile, the real Bill and Ted head into the afterlife where they meet The Grim Reaper (William Sadler), beat him at a variety of games and eventually win their way back to life alongside a duo of alien creatures named Station, who assist them in building good robot versions of themselves to take down the evil robot versions of themselves. 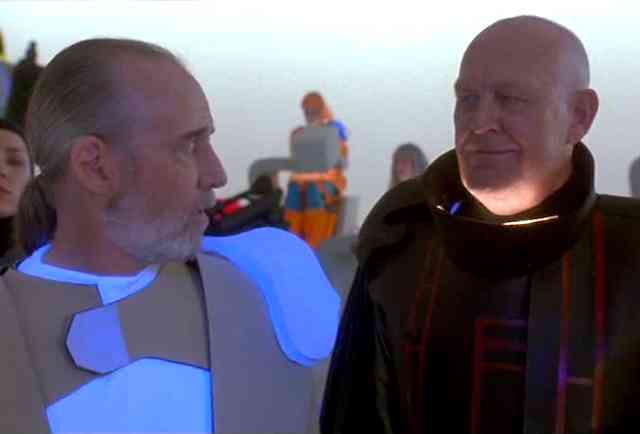 This was a tough one. The longer it went, the more I wanted to switch it off. Although it attempted to outdo the original film’s sense of wonderful charm, familiarity with these characters ensured we had to go somewhere new with them, not just retread over old ground. Sadly, going to hell with Bill and Ted isn’t as fun as it probably sounded on paper, with the pair of eternal slackers roundly unequal to the task of making this whole thing fun. Instead, Bogus Journey feels incredibly forced, not aided at all by some of the worst plot points in 90’s cinema and a removal of the kooky good-natured gags the first film had in spades. Reeves and Winter pull double duty playing both good and evil versions of their characters, the former with barely contained repetition and the latter with a strange degree of hatred that feels out of kilter with what the tone of the film is trying to be. 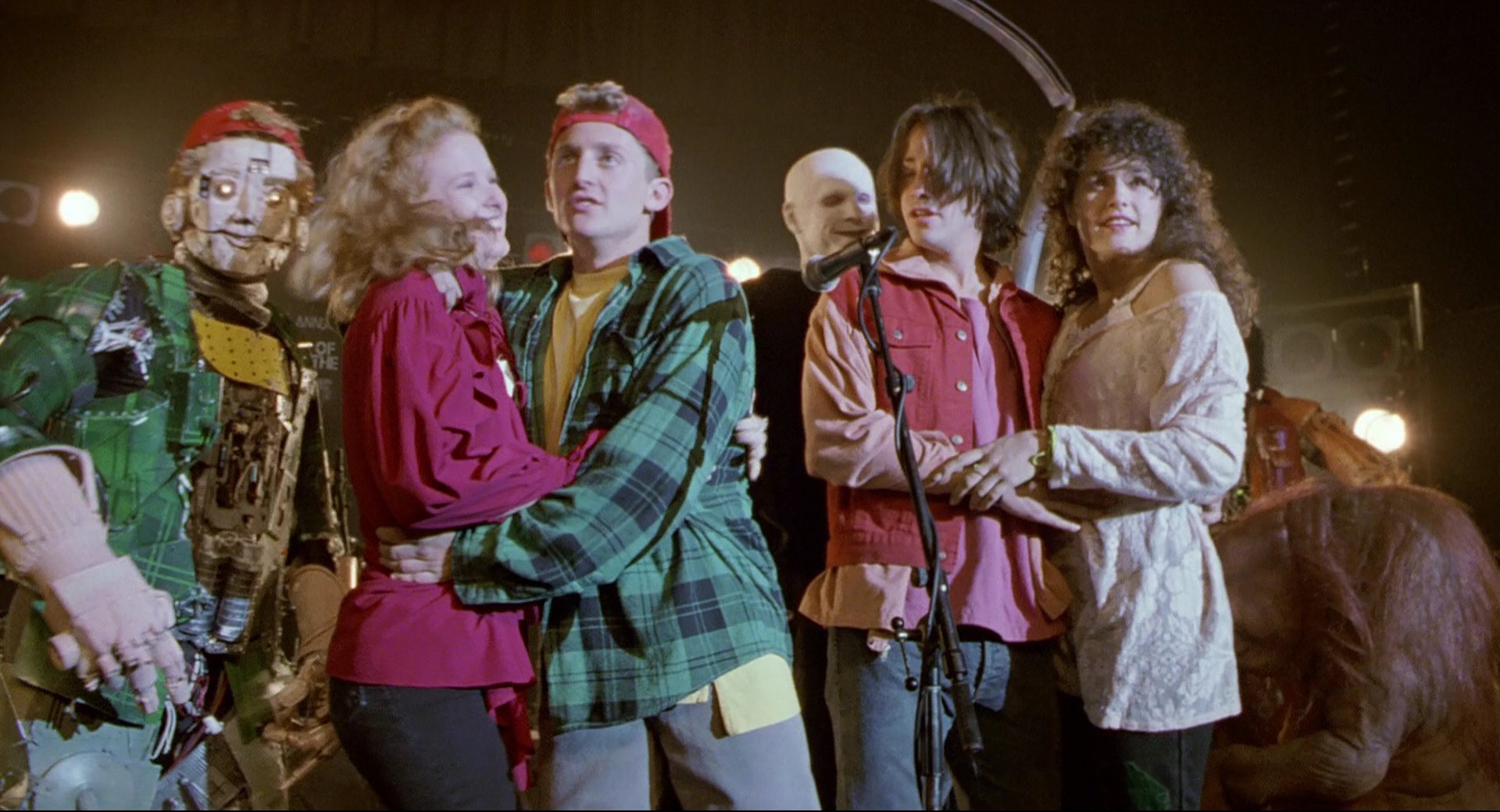 On paper though? Probably ought to have worked. The gang all returns – Bill, Ted, Rufus, the gold-digging Missy (an underused Missy Stock-Poynton), as well as the boy’s respective dads in J Patrick McNamara and Hal Landon Jr, and throws in Joss Ackland as the film’s central antagonist, Pam Grier as the organiser of the Battle Of The Bands, and William Sadler as a rather bemused Grim Reaper, perhaps the film’s only real shining light. The problem is that the original film’s core conceit, time travel into history, is all but removed as a catalyst for the premise: sure, Ackland’s ingloriously named Chuck De Nomolos uses it as a premise to kill our heroes but aside from a brief opening sequence and the film’s climactic battle of the bands (which isn’t a climax as much as it is a shrug of creative expiration) the good old phone box is hardly used. The idea of time travel is inextricably entwined within the franchise’s DNA and so for the film to avoid using it much at all baffled me. 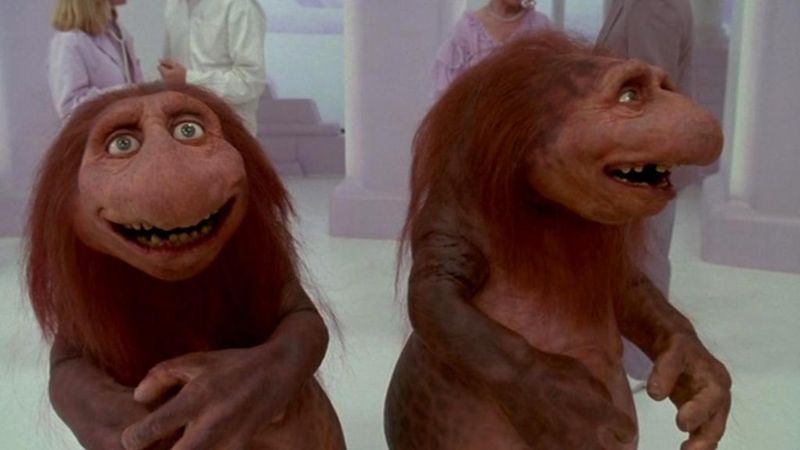 Then there’s the extended decision to have Bill and Ted journey through various stages of the afterlife; first in hell, where they meet monstrous nightmares that younger kids will probably be traumatised by, then Purgatory where the Grim Reaper awaits them, and finally heaven where they mug a couple of new arrivals in order to meet God, the tonal imbalance between fun, funny and outright strange shifts too frequently to allow the film to flesh itself out enough to work. As mentioned, William Sadler’s Grim Reaper is an absolute blast, and the irony of our two resident dimwits taking it to the ghastly figure of death like they do should be a total riot (it isn’t, more’s the pity), but the laughs from this are few and far between. Then there’s the inadequately explained inclusion of what are alluded to be twin alien creatures named Station that for some reason know how to create junkyard robots from random hardware parts who essentially propel the film’s middling second act to its utterly lacklustre finale. 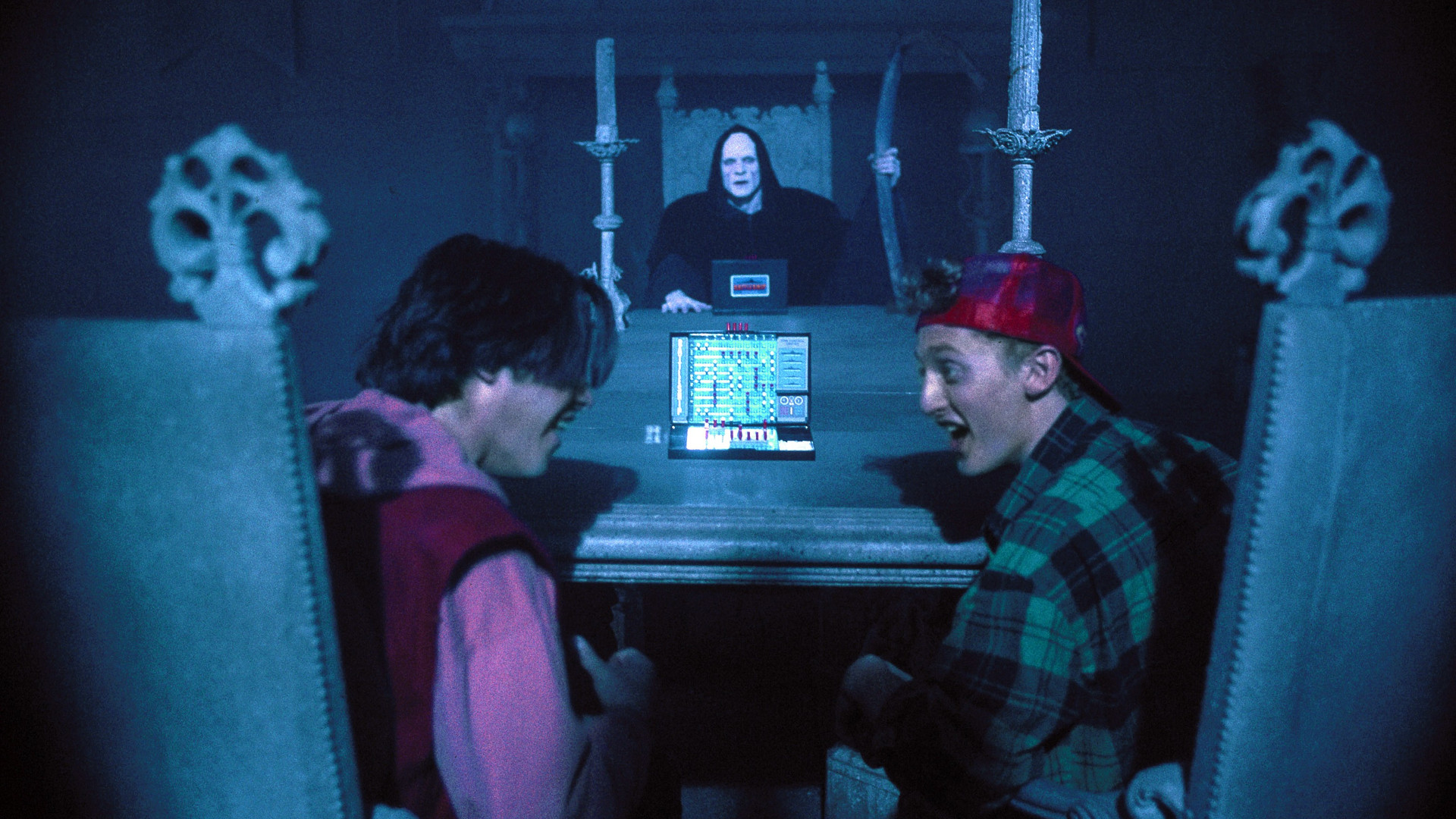 Never before has a film’s climax so roundly disappointed me. The finale of Excellent Adventure worked because it was charming, paid off multiple character moments and roused the audience for its energetic sense of closure. Bogus Journey lacks the momentum and the willpower to deliver a similar ending, fizzling out with some stupid visual effects and two of the worst practical effects in modern cinema: Jim Henson Workshop castoffs Station, and the two Good Bill And Ted Robots they construct in the back of a panel van. They’re story elements that fail utterly, and upon which the climax relies so you know things are bad before they happen. I mean, when your film includes a satanic Easter Bunny, a hideous cadaverous grandmother and a belligerent army recruiter and they’re not the worst thing about your film, you’re doing terribly. 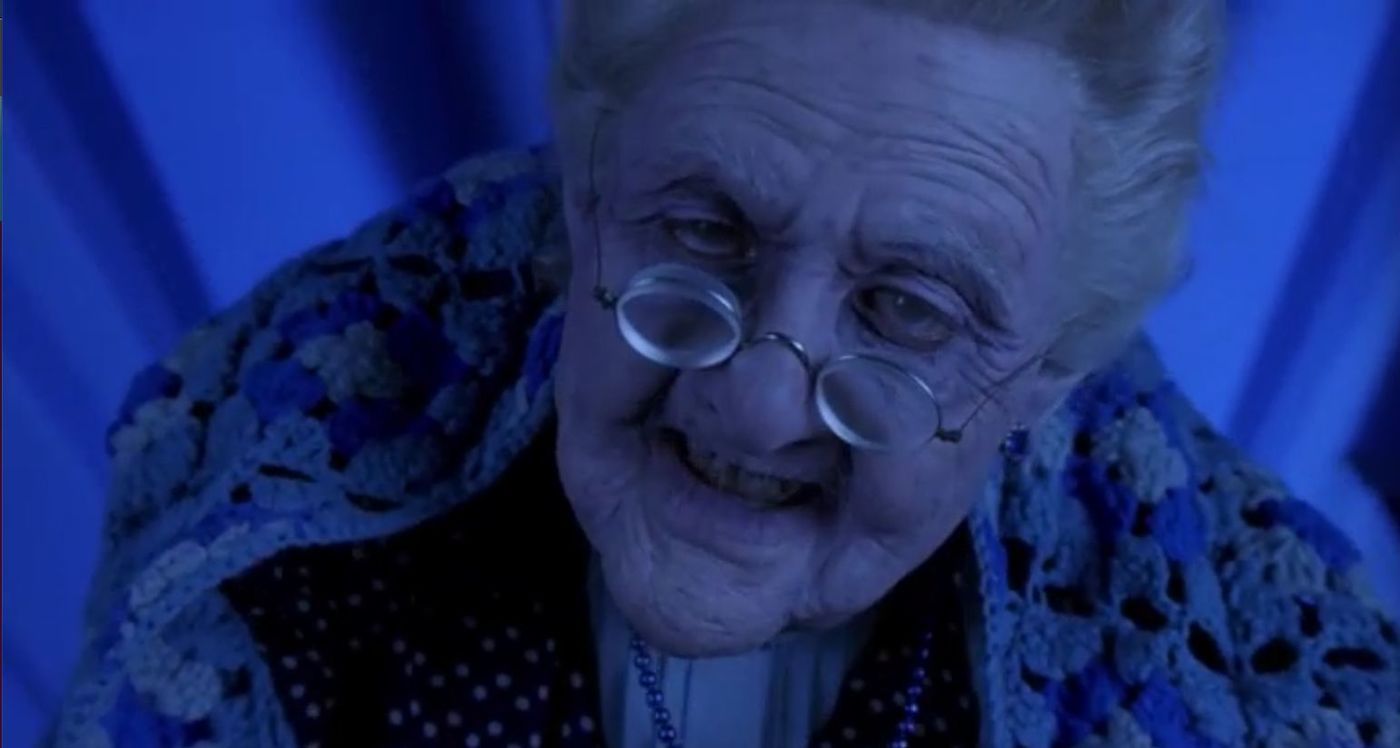 Bill & Ted’s Bogus Journey was incredibly disappointing. Gone is the happy-go-lucky silliness and eternally optimistic humour of Excellent Adventure and in its place is nihilism and a streak of meanness you don’t often find in kids flicks these days. Indecipherable silliness might work well enough for some, and the broad slapstick humour strikes well enough in places, but Pete Hewitt’s debut feature film as director isn’t one to savour. William Sadler’s Grim Reaper is the standout among a plethora of problems and terrible creative decisions. That George Carlin is hardly in this one is a true blessing for both him and us.