Proto-feminist action franchise Charlie’s Angels returns with a vengeance in Elizabeth Banks’ enthusiastic but strangely inert entry rebooting the property for the modern age. Girl power never looked so good (Aladdin star Naomi Scott is still white-hot gorgeous, y’all) and Elizabeth Banks’ film trades heavily on this aesthetic to its favour, but the director’s lack of action chops and inability to energise the film in the way she obviously intends to limits its carryover potential. This isn’t to suggest the film is poor; far from it, it has a lot going for it, but either I’m not the target demographic (I obviously am not) or I’m perhaps too demanding of my action genre, I just found the 2019 revamp of Charlie’s Angels lacking in some respects.

After developing a revolutionary new power source, scientist Elena Houghlin (Naomi Scott) finds herself on the run from a mysterious black market operative (Jonathan Tucker) after being double-crossed by her former boss, Fleming (Nat Faxon). She is assisted by a duo of operatives from the secretive Townsend Agency: Sabina Wilson (Kirsten Stewart) and Jane Kano (Ella Balinska), at the behest of Bosley (Elizabeth Banks), with the group globe-trotting to discover who the real enemy is. Is is the CEO of Brock Industries, Alexander Brock (Sam Claflin), the international smuggler “Australian” Johnny (Chris Pang), or one of the early Bosleys (Patrick Stewart), who has recently gone into retirement? 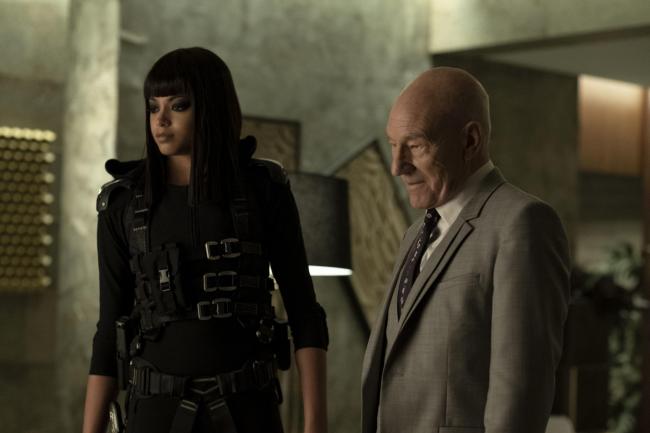 Charlie’s Angels is one of those weird PG-13 action films that feels somehow anaemic with its prime directive (that’s a pun on the inclusion of Patrick Stewart in this movie, folks): action films have a formula, most people enjoy them, and the execution of said action will go a long way to propelling the story alongside the explosions and gunfire. Almost impossibly, Elizabeth Banks (who directed most of the Pitch Perfect films and who co-stars here in a pivotal role) has crafted an action-centric film with action so muddled and confused the film’s inherent cheesiness – and let’s face it, a trio of sexy female operatives in multiple wigs and stilettos is more about cheese than legitimate feminist ideals – is lost betwixt the indifferent humour and ill-equipped style. It reminded me a lot of Corey Yuen’s incessantly vapid and incredibly exploitative DOA: Dead Or Alive, which I don’t think was the point of what they were trying to achieve here but ended up managing anyway. 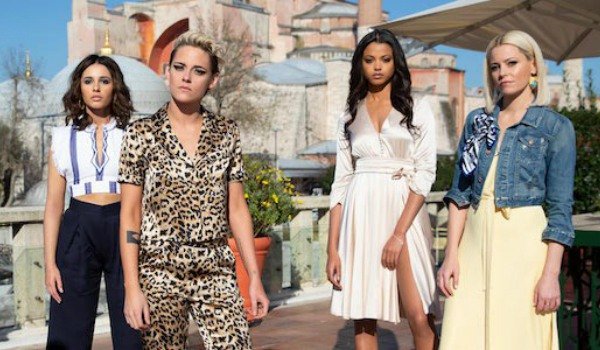 The film kicks off reasonably enough, with Kristen Stewart’s delectable Sabina rousing up Chris Pang’s suave businessman before things turn all James Bond and everyone’s Kung Fu Fighting. Then it’s off to Charlie’s School of Exposition, which catches newbies up with exactly what the premise of Charlie’s Angels is, all whilst informing us that the nomenclature “Bosley” is a code name used by multiple handlers for the Townsend Agency – Patrick Stewart’s retiring Bosley is wished farewell by Elizabeth Banks’ version (and many others are shown in cameos) – and setting up the overly complicated plot device of an Ikea dodecahedron-shaped power source designed by Naomi Scott’s unbelievably intelligent science character. It’s weird that Elena is saddled with a laboratory assistant as dull-witted as the one portrayed by sex-on-a-stick Noah Centineo (To All The Boys I’ve Loved Before), but that’s Charlie’s Angels, folks. The plot is pretty much intransigent to the action, folks: a simplistic saddlebag of conniptions designed to send our film across Europe and America like any good espionage flick ought, and to this end I think the movie works well enough as a showcase of the varied locations the budget allowed.

Sadly, through the glitz and glamour of Stewart and Ballinska’s multitudinous costume changes and hairstyles, the silliness can’t generate genuine fun. I’m all for films that don’t take themselves seriously (and this one is definitely trying) but Banks (who also wrote the screenplay) can’t balance the cheese with the earnestness of the female heroines, stumbling into a weird Austin Powers vibe at times when it should be hitting harder with a Jason Bourne-esque sincerity. Make no mistake: the film has its fair share of shocks amid the bloodless antics (impalement, defenestration and somebody being obliterated in a rock crusher are particularly gruesome beats in a film played mainly for a good time) but hard-core action fans will find this a frustrating affair for what it doesn’t do more than what it does. Banks’ work gathering pace in the exposition and “style” sequences is really good, and the film sparkles whenever (and I mean whenever) Naomi Scott is on screen (her appearance in a red dress late in the film is sexy as hell) but the action sequences feel… I don’t know, weak? Meandering? Insufficient? They didn’t punch like they ought, and some of the visual effects were weak, but if nothing else there’s a sense of genuine love for the material in spite of the weaknesses within it. 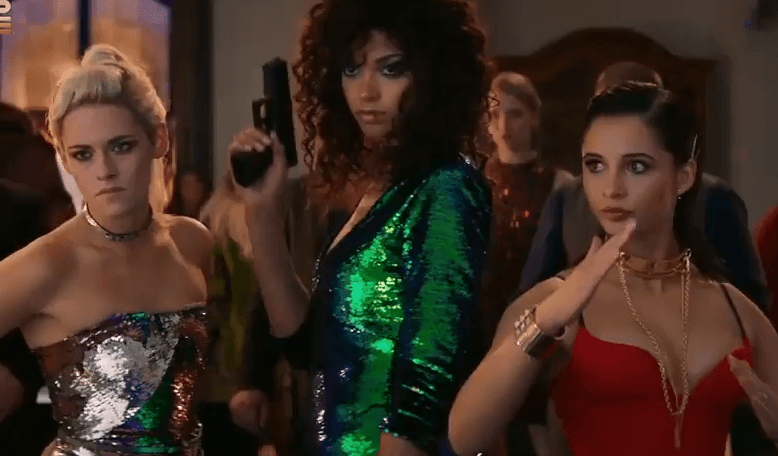 If this film was intended to kick-start the franchise again (after McG’s films and a lame television series did their best) then it’s a colourful, gleeful failure. Charlie’s Angels was never highbrow entertainment, and as much as people bash McG’s feature films at least they honed in on the rambunctious insanity the franchise offered audiences. Sadly, Banks’ film lacks energy where it counts, feeling often too insular and too restrained to really sell the transcontinental antics of our resident beauties. Stewart, Ballinska and Scott are always watchable, and Jonathan Tucker’s tattooed assassin is almost as creepy as Crispin Glover’s Thin Man was in the 2000 film, but the “fun” of this film feels too trite and manufactured, too glib and transient with its motivation. Played for laughs and working hard to achieve them, Charlie’s Angels is amenable enough but ultimately unremarkable.