The long-awaited sequel to the hugely successful 2015 film Shaun The Sheep The Movie, Aardman’s Farmageddon is a trippy nod to all things UFO and popular culture as well as being a fond addition to the Shaun the Sheep canon of adventures. Stop-motion animation still holds a certain degree of charm in this PC-friendly digitised world, and as expected the studio’s patented style and sense of whimsy continue to delight and entertain. Much like their Wallace & Gromit days, the studio places a great deal of care into visual storytelling – the entire Shaun The Sheep franchise is built on the premise of being universally understood without needing traditional dialogue – and Farmageddon is no different; sight gags are the order of the day here, although a couple of decent audio cues (notably a reprise of the X-Files theme in a key sequence) certainly will being a smile to the face of any adult sitting down to watch this one. 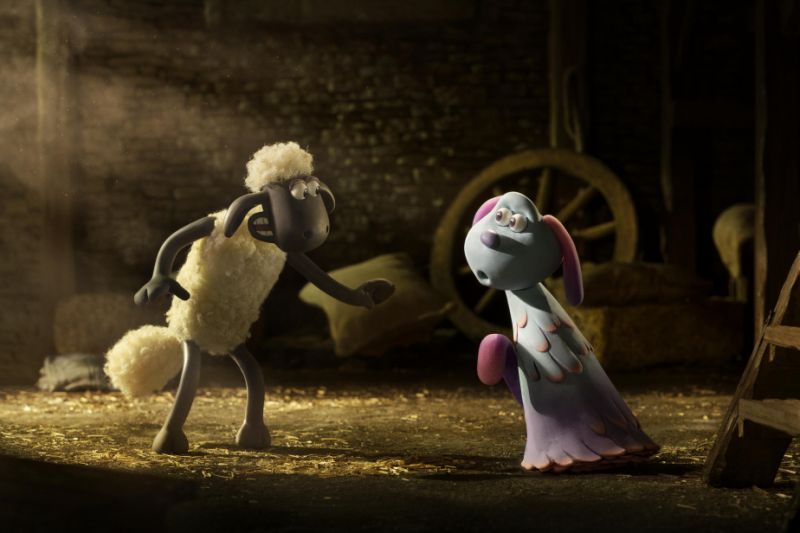 Late one night, in the town of Mossingham, a farmer and his dog are walking through a forest when they encounter what they believe to be an alien creature emerging from a spaceship. This alerts the attention of the Ministry Of Alien Detections (or MAD), whose leader, Agent Red (Kate Harbour) is obsessed with finding proof of alien life. Meanwhile, on Mossy Bottom Farm, Shaun the Sheep (Justin Fletcher), Bitzer (John Sparkes) and the rest of the farm’s inhabitants are going about their lives in relative ignorance, until Shaun encounters a tiny alien, Lu-La (Amalia Vitale) hiding in the barn. Lu-La has become separated from his spaceship and parents, and Shaun tries to help him escape. The Farmer (Sparkes again), seeking the alien craze as a way to make money for a new harvester, constructs a gigantic theme park on his property, names is “Farmageddon” and invites a load of UFO fanatics to experience it. 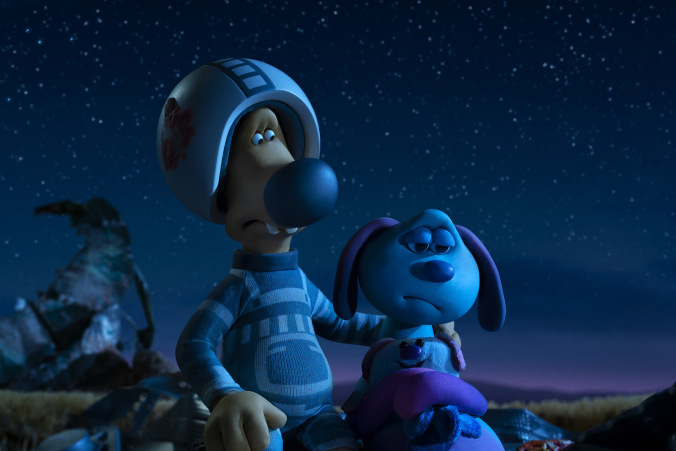 As Aardman’s penchant for homages to specific genre of film goes, Farmageddon is easily one of the most subtle. Where Chicken Run was based on The Great Escape, the original Shaun The Sheep movie was a “kid lost in a big city” motif, and Wallace & Gromit’s adventures touched on classic monster horror, detective themes and classic sci-fi, then Farmageddon latches onto the “alien visitors” subgenre and runs amok with nods and winks to the audience. It pays tribute in small ways to Close Encounters Of The Third Kind, ET The Extra-terrestrial, The X-Files, Doctor Who, and a bevvy of other notable films and television programmes, but only in a loving, comedic manner and never at the expense of the story. The entire premise is based on an Alien stuck on Earth a la ET, with pursuing Agents and Shaun’s child-like sense of heroism (akin to Elliot from Spielberg’s seminal film) helping the stranger to our planet find his way home. The little references and jokes will make canny observers smile a lot, whilst the kids get caught up in the intricacies of a pretty basic Looney Toons plot. 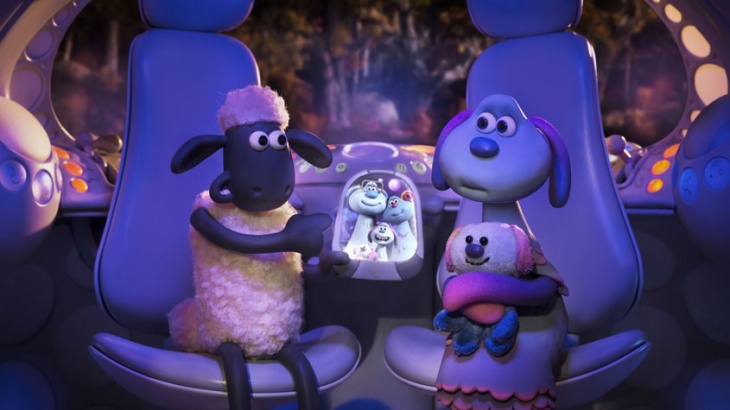 The trouble with Farmageddon, though, is that the film doesn’t play to the franchise’s strongest elements. The friction between Shaun and Bitzer, the farm’s resident 2IC dog, is absent for a lot of Farmageddon’s running time, whilst the Farmer, typically the oblivious participant in all of Shaun’s schemes throughout the long-running television series, feels less like he’s involved and more like the filmmakers couldn’t really find much for him to do. The franchise works best when it’s working with the bonds between Shaun, Bitzer and the Farmer, and bizarrely they spend very little actual time together in this film – by comparison, in Shaun’s original feature film, the trio had equal screen time and significant emotional payoff for their respective arcs. Instead, the film is usurped to its detriment by Lu-La, a cute but indifferent alien of indeterminate powers (other than perfect vocal mimicry and the gift of levitation) who springboards into the story but lacks impact throughout, rather like a lost puppy. Thrusting this fourth element into the established order normally ought to have worked in giving the film’s jokey, set-piece driven plot a little more to work with but strangely it doesn’t: Farmageddon grinds to a halt when the alien is on the screen, only zipping along lethargically when Shaun is working his sheepy magic. 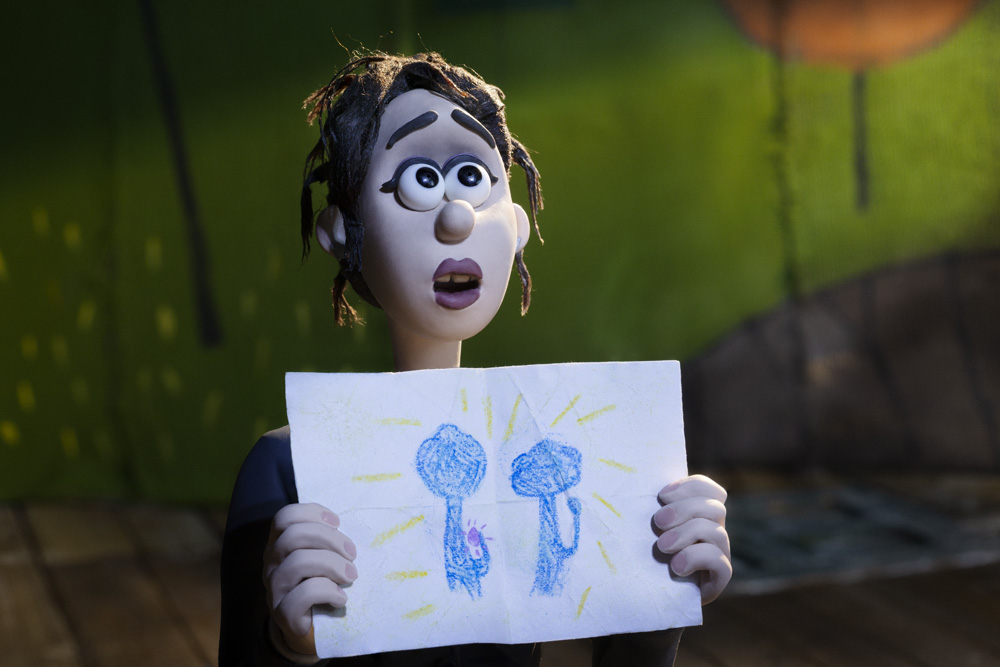 The film’s lesser light is Agent Red, the central villain, and it’s her obsession with alien life that perhaps should have been a bigger foil for Shaun and the gang. She’s too easily defeated but her backstory, whilst rote, is arguably the best element of the new characters in the movie, if only they’d focused more on that than the Farmer’s godawful attempt to Disneyland his own farm. To a certain point she reminded me of Mrs Tweedy in Chicken Run, but where Tweedy had genuine menace and a sense of prevailing evil, Agent Red’s arc is less defined and far more simplified, which acutely robs the story of energy when it’s required most. The climax of the film involves Agent Red aping King Kong (ha!) but the showdown feels hamstrung by a perplexing iniquity of tone, and you get the sense that the film is going through the motions. I know, I know, you’d never claim that from an Aardman film but directors Will Becher and Richard Phelan, working from a story by Shaun creator Richard Starzak, never strike the same fun-loving and emotionally cathartic resonance we enjoyed in the first film.

Look, have I asked too much of a film starring an animated Plasticine sheep? Am I expecting some grandiose masterpiece that transcends the medium? No, I’m not: Farmageddon is a delightfully cute and routinely hilarious sci-fi inspired comedic adventure that will keep any aficionado of the franchise happy. It lags at times, feels a touch long (which is bad considering it’s barely 90 minutes anyway) and misfires with its villain and climax, but it’s hardly world ending for a bunch of characters as beloved as these. Worth a look for casual viewers, but a decidedly ambivalent tone lower its score.