Based on true people and events, sprinkled with just enough post-modern sexual equality subtext to captivate the masses, and told with a sense of magic and wonder (as well as terrifying danger), Tom Harper’s semi-biographical account of 19th Century scientist and meteorologist James Glaisher’s ascent into the clouds via a balloon to discover more about our world is a curious thing indeed. The film’s main draw is its two leads, a bullish Eddie Redmayne and a strong-willed Felicity Jones, who play people at competing odds with the mission but whom come to recognise each other’s strengths as Jones’ balloon pilot continues to deal with the tragic death of her husband some time earlier. The film refuses to be pigeonholed as a specific genre of film: one part biography, the film doesn’t feel very biographical with its rewriting of history, and another part adventure that’s less adventurous than it appears, The Aeronauts is a curiously enthralling but strangely ambivalent adventure film lacking a central theme to pivot on but containing multitudes of breathtaking sky-high visual effects. 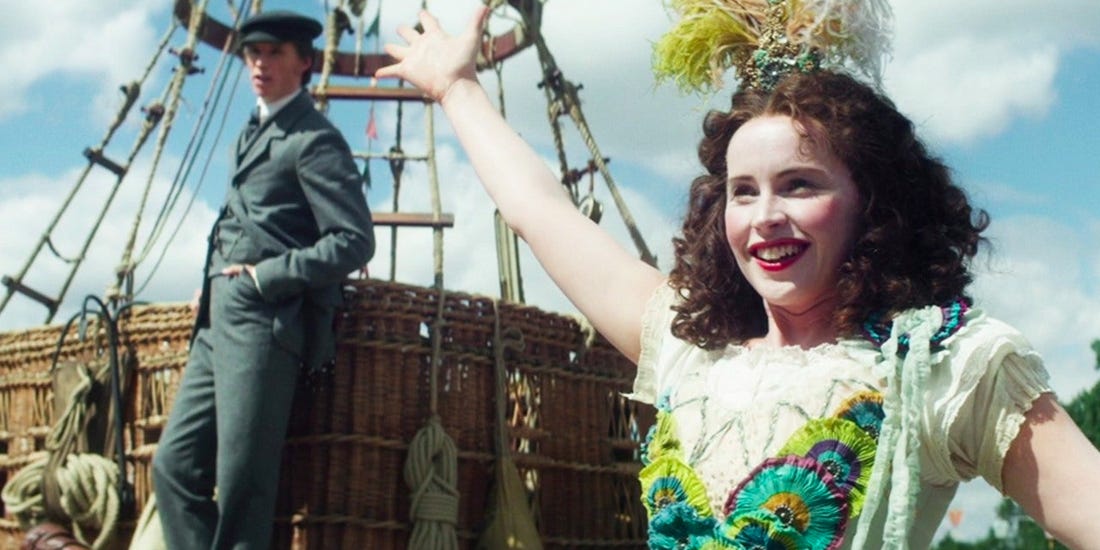 In 1862 London, young scientist and meteorologist James Glaisher (Redmayne) plans to ascend into the heavens to discover more about out atmosphere, under the proposition that weather can be predicted if enough information is gathered. He recruits renowned balloon pilot Amelia Rennes (Jones), herself subsumed by grief at the tragic death of her husband (Vincent Perez) in a ballooning accident years before, and the pair form an unlikely partnership. Glaisher’s friend John Trew (Himesh Patel) and Amelia’s sister Antonia (Phoebe Fox) are reticent to fully support the venture, whilst Glaisher’s collegiate associates at the Royal Society scoff and ridicule the young scientist for his perceived insanity. However, once the pair take off into the clouds on their silken balloon, they soon discover far more adventure, beauty and danger than either of them bargained for. 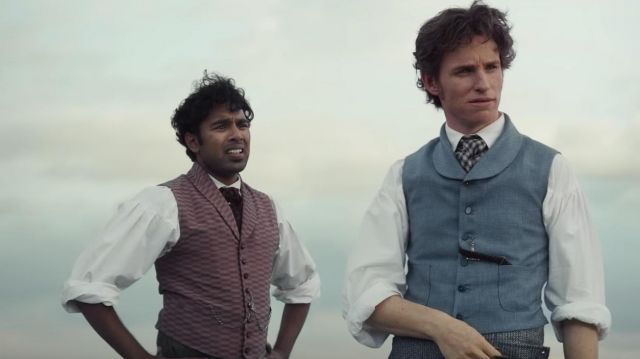 It’s one thing to have a good time with a film you know almost nothing about, it’s another to have a good time with it despite recognising some crucial flaws that prevent it from, if you’ll pardon the pun, reaching the heights it so richly deserved. On the surface The Aeronauts is a fairly competent adventure film, with the aerial antics far surpassing the staid and stilted story on the ground. It’s fair to say that when Redmayne and Jones fly aloft the film… takes off. Heh heh. You don’t get this kind of humour at other websites, folks. Ahem. Written by Wonder scribe Jack Thorne from a story by Thorne and director Jack Harper, and based upon Richard Holmes’ non-fiction book “Falling Upwards”, The Aeronauts tries to balance historical accuracy and modern big-screen adventure and makes some really bad mistakes that hindered my enjoyment. 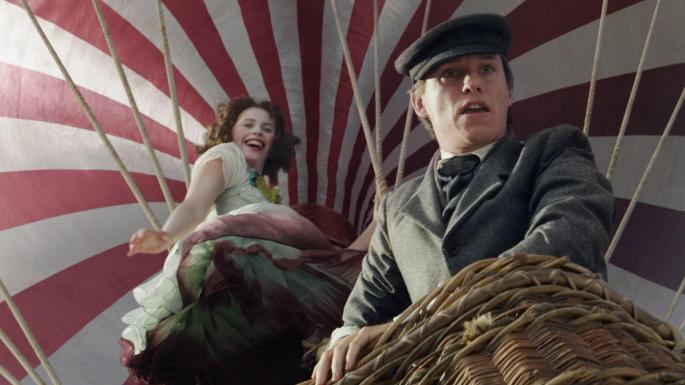 For a start, Felicity Jones’ character Amelia Rennes is entirely fictional, reputedly a composition of several notable female scientists of the era (including Margaret Graham and Sophie Blanchard), which wouldn’t be such an issue had the writers not excluded completely Glaisher’s real-life friend and fellow aeronaut Henry Coxwell from the story. Coxwell played an integral part of the scientific discoveries alongside Glaisher but he’s not even mentioned here, replaced by what is obviously a creative choice to get more women into the film. Let’s face it, women were woefully underrepresented in the scientific community back in the 19th Century, but to replace a key figure in the meteorological theme just for the sake of having a strong female lead seems counter-intuitive to the truth of the story itself. The film has very few female roles anyway, left mainly to the Glaisher’s dutiful sister and mother left below to worry and fret over the fate of their sibling, but replacing a key figure in the story just to promote the idea of a female balloon pilot with a tragic history doesn’t sit well with me. That said, the film does try and give Amelia a strong sense of feminist purpose, a woman of skill living at a time when women were meant to be seen and married off, rather than escaping onto dangerous adventures, so for that I give it credit. It’s a good thing so see women represented in film, but The Aeronauts badly misjudges the reliance of contemporary requirements that women have larger roles to play; had Harper replaced Coxwell with a real-life female scientist of historical note, that would have been far and away the better thing to do. To replace him with a complete fiction? Hmmm, not so much. 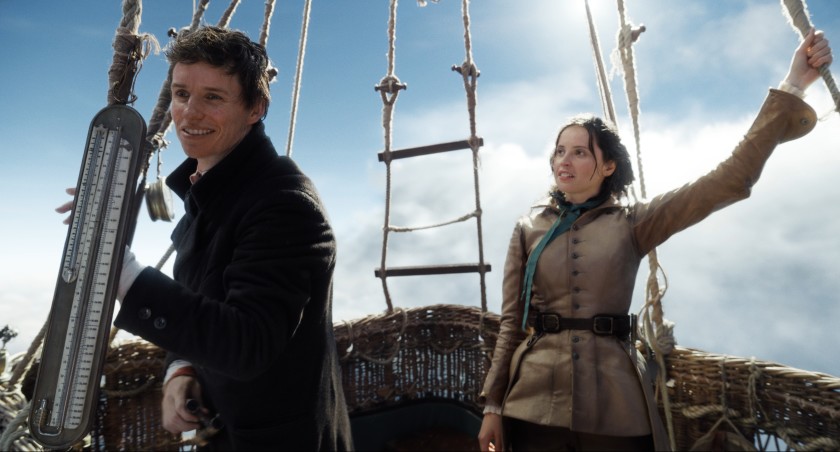 That aside, The Aeronauts feels a bit limited with the way its put together. The story of Glaisher and Amelia isn’t interesting at all when they’re on the ground, what with the prejudice to his theories and lack of respect within the scientific community, and her grief over losing her husband. The film features a lot of flashbacks that I guess are intended to reveal more about both Amelia and Glaisher at key moments of the film, but they’re muddled and don’t work well, feeling underdeveloped within the breathtaking accomplishment of balloon flight. The development between the two leads is also insufficient, unable to bridge the gap between pure historical narrative and grand human adventure, offering a middling mix of confused angst and grief that underwhelms. Redmayne plays Glaisher with a rigid sense of purpose that’s obviously of-the-period and the actor carries it off well, yet his persistence – nay, obsession – with his theories is given glib lip-service without really feeling it. The character of Amelia and her history of tragedy with ballooning is not quite the obvious choice for Glaisher’s mission: exactly why he would choose her above so many others (maybe it’s because he’s a laughing stock and nobody will back him? Cool… but where is the development of this to warrant the choice?) isn’t given enough room to breathe. Instead, we’re treated to a combative, near-antagonistic relationship without the script doing the work to make it believable. 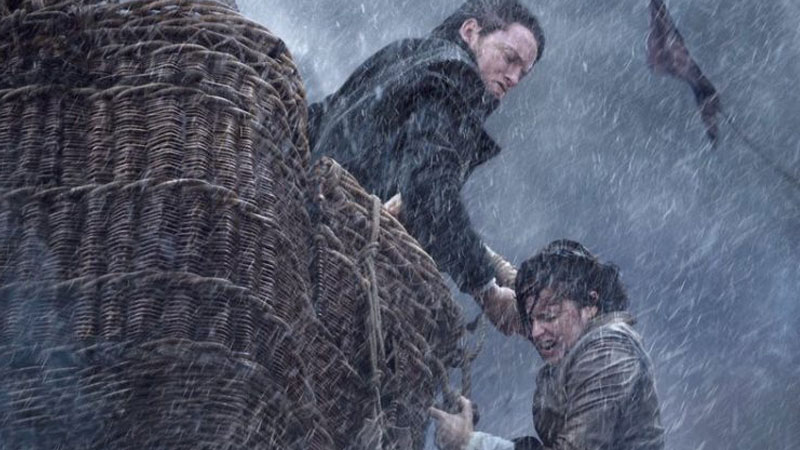 But, and this is a huge but, the film’s visual effects and cinematography of its vast aerial sequences are, and I cannot emphasise this enough, incredible. Harper does for stratospheric adventure what Alfonso Cuaron did for orbital flight in Gravity: The Aeronauts depicts early balloon flight into the upper atmosphere as a heady, beautiful and understandably dangerous adventure, with changes in air pressure, temperature and the relatively simplistic technical advancements of the day playing a key role in making the film as white-knuckle as it is. The ballooning sequences are wonderful, truly awesome filmmaking and George Steel’s cinematography during these moments is absolutely first-rate. As our two leads fly higher into the sky, reaching altitudes that would make early jet airliners whimper, the stakes become more and more palpable as ice and lack of oxygen threaten to overwhelm the adventurers. For all the weaknesses in story and character development, the aerial sequences are more than worth their price of admission, spectacularly rendered with mind-blowing visual effects and compelling editing by Mark Eckersley to generate some truly scintillating tension. Will Amelia throw herself out of the basket to save them both? Will Glaisher continue to flinging homing pigeons back to Earth to “ner ner ner” his disbelieving scientific colleagues?

Although the creative choices around the central characters are difficult to parse with the historical aspects of the story, and the development of both Glaisher and Amelia flounders poorly within the framework of the adventure, there’s enough spectacular storytelling here to outweigh many of the problems I had with the movie. Redmayne and Jones are excellent with the limited material they have, and I found the indistinct development around their relationship and the relationship with the ill-used supporting players frustrating, but for a glimpse of a little-known period in scientific discovery that probably needed a more straightforward telling I found The Aeronauts engaging enough to warrant recommendation. Albeit with caveats in place.