More a curiosity in the Godzilla pantheon than an outright classic, 1966’s Ebirah, Horror of The Deep (and retitled as Godzilla Vs The Sea Monster in the US two years later) features a lot less kaiju action than I was hoping for but a far more intriguing human element than I was anticipating; not only does the 7th Japanese film featuring Godzilla boast a “heroic” return for the slumbering screen icon, as well as introducing a giant farking lobster thing (Ebirah itself), but a reappearance of fan favourite Mothra as well as a smaller cameo from a gigantic bird that flaps about for a bit before being offed in a completely casual manner. Reputedly shot with a lower budget than previous instalments, and set on a mysterious Pacific island to keep visual effects costs down, Ebirah does indeed look quite cheaply made, although in its own way has a bubbly charm that’s impossible to deny. 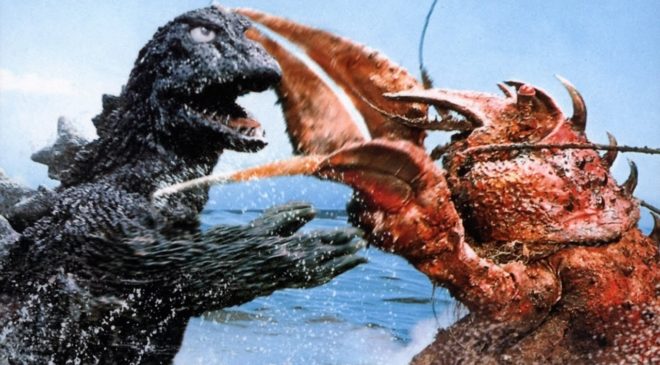 A terrorist organisation known as Red Bamboo have made their base on the secretive Letchi Island, where they are protected by a gigantic lobster-like creature living under the water named Ebirah. There, the Red Bamboo, led by Captain Yamoto (Akihiro Hirata) capture and enslave the inhabitants of nearby Infant Island (seen in 1961’s Mothra) to create weapons of mass destruction. One of a group of captured slaves is Yata (Toru Ibuki), whose brother Ryota (Toru Watanabe) sets sail with two of his friends and a boat thief (Akira Takarada) to rescue him. There they uncover the existence of a slumbering Godzilla (Harau Nakajima) and awaken him in order to defeat not just Ebirah but a gigantic condor that protects the island. Godzilla is also aided by Mothra, who arrives to collect the human slaves and return them to their home island. 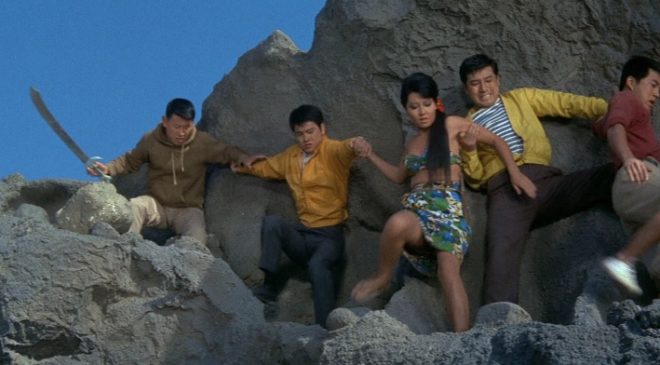 One could never hand-on-heart describe Ebirah, Horror of The Deep as a “good” film. In terms of story and character, the film is flimsy indeed, lacking depth or quality development when it comes to the human ingredients. The addition of a terrorist organisation amidst the titanic battling monsters merely allows for convoluted gunbattles and explosions and a preposterously inane nuclear threat (remember, the early Godzilla films were made at the very height of the Red Scare of the 50’s and 60’s, when the Cold War was up and running), and the join-the-dots scripting does lean heavily into contrivance moreso than realism in any sense. The original Godzilla was a razor-taut sci-fi chiller that tapped into a realistic fear of nuclear holocaust, whereas by the time we get to Ebirah, things had become more pop-oriented with regards to the creature’s depiction on the screen.

A large portion of the film’s early going is primarily human-driven, setting up the smattering of characters and locales with a perfunctory, exposition-heavy manner lacking subtlety or wit. The aforementioned requirement of producing studio Toho to keep the budget down required repositioning the gigantic man-in-suit monsters to a fairly low-key island in the ocean, rather than the far more destruction-friendly Japanese mainland, with the more insular premise feeling more like “made for TV” than a genuine widescreen cinematic adventure. The acting is about on-par for this genre of film, and the Japanese dialogue (with English subtitles) wants not for introspection or a sense of humanity: it’s almost entirely explanatory material designed to move the players into position and set up the inevitable showdown between Godzilla and his oversized foes. Akihiro Hirata makes for a compellingly cheesy villain, eyepatch and all, whilst Akira Takarada, Toru Wantanabe and the rest of the lead cast provide requisite awe and energy as they clamber across the escarpments and chasms of the island on which they become stranded.

Naturally, attention is drawn to the enormous Godzilla, Ebirah, Mothra and the nameless giant bird that attacks Godzilla at one point, and to the credit of all involved the effects of these scale muppets is really quite charming. Not faultless, but at least competent. The title character, Ebirah, is an enormous lobster creature that really doesn’t work well at all given the camera rarely ventures beneath the waves, making his bulk largely hidden from view for a long time – and director Jun Fukuda isn’t able to generate a sense of terror or doom a la Spielberg’s Jaws shark, which suffered the same technical problems a decade later – and the showdown with Godzilla to end the film is actually rather weak. The rise of Godzilla from his slumber beneath an island peak (I guess this was explained in a previous film?) is cleverly done, and a showdown between the titan and the giant pterodactyl-ish bird is handled with all the ground-shaking extravagance a minuscule budget allows. The inclusion of Mothra is a welcome one, but the crappy effects of Mothra’s flight, and her constant resistance to actually doing much at all for almost the entire film, is frustrating indeed. The destruction of the terrorist’s headquarters through creature or human intervention are nicely done – obviously models, but practical always trumps digital with this kind of thing – and the charming wobbliness of the entire film, reaching for a sense of scale it could never truly attain, remains intact.

Ebirah, Horror of The Deep is a kaiju film for fans of the genre and almost nobody else. The cheesy effects, roundly 60’s photography and style, and shift of focus from the monsters to the humans makes this a more specific entry into the Toho canon that will confuse more general audiences and perplex perhaps even the hardiest advocate of the genre. It has its moments, this film, and when they arrive they arrive with full force. But limited quality in scripting, and an obvious budgetary restriction really hampers the enjoyment overall, despite intrinsic appeal. Ebirah isn’t quite as much a horror as its title might indicate, rooted firmly as it is in the middle-tier of Godzilla entries of the period.