Long before I ever got into DC or Marvel, well before I came to collect old Frew Phantom issues and pore through my father’s deteriorating collection of Footrot Flats compendiums, I was entrenched in the comic book antics of two distinctly European literary creations; Herge’s Tintin and the Coscinny/Uderzo comedic creation of Asterix The Gaul. Published as far back as the late 1950’s, Asterix’ adventures became a staple of my early 80’s school life, as our local librarian made the fortunate decision to obtain the collected stories of this French champion, and I began reading the (at that point) 28 volumes of the character’s adventures in ancient Gaul (France) voraciously. Asterix was a largely comedic creation of Rene Goscinny and Albert Uderzo, a pair of French comic collaborators who took readers back into the height of the Roman Empire, where a small coastal village of local Gaulish inhabitants, led by their chief Vercingetorix and protected by a magic potion brewed by village druid Getafix (known as Panoramix in the French editions), held out against the Roman invaders and became a continual thorn in Emperor Julius Caesar’s side. 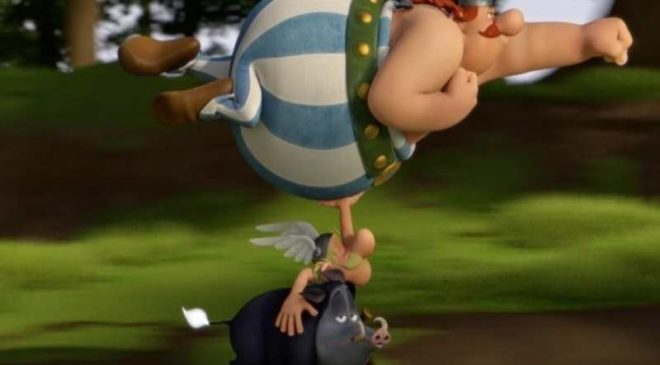 The Mansions Of The Gods is based on the similarly named 17th collected volume of Asterix’ adventures (originally published in its collected volume in 1973, two years before I was born!), in which Caesar (voice of Jim Broadbent) intends to build a new colony near the Gaulish village as a way of forcing them to accept Roman rule. He sends an architect, Squareonthehypotenus (get it?) to construct an enormous set of Roman apartment buildings in the forest surrounding the village, much to Asterix (Jack Whitehall), Obelix (Nick Frost) and Getafix’s (John Innes) chagrin. Initially, the villagers are wary of the new Roman civilian inhabitants, but soon realise there is plenty of sestertii (Roman money) to be made selling “original” souvenirs to the newcomers, with only Asterix and his friends realising that the Gaulish way of life is threatened by this plan and set about stopping it. 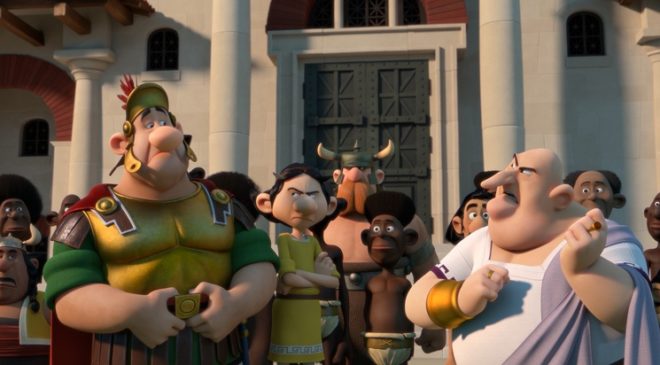 The Mansions Of The Gods will make not a jot of sense to anyone unfamiliar with the original comic property. The jokes and puns (on which the Asterix franchise is entirely based) are hilarious, but understanding the backstory and premise initially is going to be the toughest ask for incoming non-fans. The antagonistic relationship between village blacksmith Fulliautomatix (Dominic Wood) and fishmonger Unhygenix (Richard McCourt) plays out exactly as expected, the continued references to Obelix’s super-powered origin story isn’t explained at all until well into the film’s climax, and the ongoing bleakness personified by the weary Roman army encamped just beyond the village’s walls engenders knowing about all the previous encounters Asterix, Obelix and Dogmatix have with the blithering soldiers, but the wholesale fun and cartoonish physicality of the original comics transfers wonderfully to the screen in at-times gorgeous CG animation. I’ve never really “got” into the Asterix films as heavily as I have the source texts, and the live-action versions seem to remove the cheeky recklessness of the drawn figures despite decent money being thrown at the screen (Asterix & The Olympic Games is one such egregious live-action example); to wit, the premise of Asterix and his indomitable Gauls battling Romans and having transcontinental adventures translates far better to animation than it does it’s real-world counterpart. The Mansions Of The Gods is a return to form for the character’s potential. 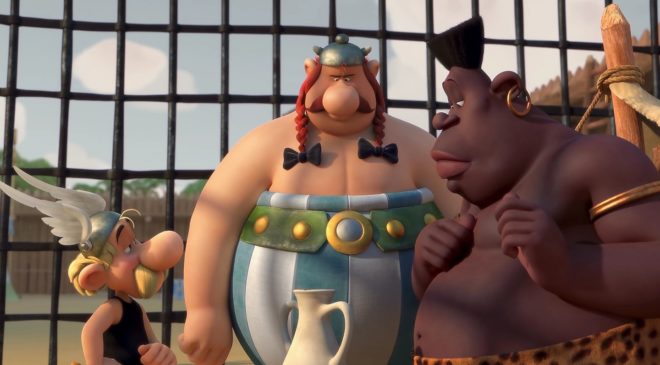 The skeleton of Goscinny’s original plot is apparent early in the film version, and a lot of the cool moments from the comic find their way into the movie wholesale or at least in part. One of my favourite elements of the original comic was the plan to replant magical acorn trees where the Romans had just deforested, driving them crazy, and the idea here is given relatively brief focus in a beautifully executed sequence. The arrival of Roman civilians at the newly built apartment blocks sees our favourite Gaulish village cash in on their own celebrated uniqueness, trading their very livelihoods for quick (and voluminous) cash at the expense of their own identities; in the comics, the village is populated by a field of idiotic inhabitants who see no further than the next all-in brawl, and that makes for an approximate Looney Toons-esque silliness, much of which is superbly woven into the fabric of this movie. The film does take some liberties with fleshing out the Roman perspective (in my opinion) with the expansion of a small family unit sent to the new colony under protest and how they relate to the Gauls personally, and the very young Michiefus (Hanna Beth Jackson) gets into all kinds of trouble that eventually brings things to a head. 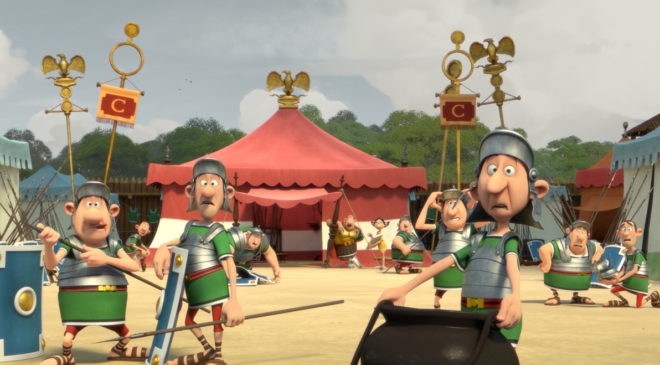 Naturally, the film’s MacGuffin is the ubiquitous Magic Potion, a mysterious brew concocted by druid Getafix that imbues its drinker with superhuman strength and physics-defying feats of impossibility. As with most Asterix tales, the potion comes into play at some crucial juncture – it’s either unavailable or unreachable or somehow used as a deus ex macahina more often than not – and here it happens again (the effects of the potion are long established as a visual shorthand in the Asterix franchise) and of course salvages a victory from the jaws of defeat. Everybody wants to see Obelix (who fell into a cauldron of potion as a baby and has now been permanently affected by it, and is always requesting a sneaky sip whenever possible despite the potential outcome being disastrous) smash Roman skulls and the film’s grand, operatic climax builds towards that with routine cleverness and wit, offering the typically wry puns and sight gags the comic is well known for verbatim from both the source and director Alexandre Astier’s screenplay, which is packed to the rafters with jokes that work more often than not, thankfully. A lot of the characters names (such as the architect of the apartments, Squareonthehypotenus, for example) make fun of popular culture or humours references to places, names and things from history, although it should be mentioned that the film is so rapid-paced that a lot of these gags get lost in the translation. 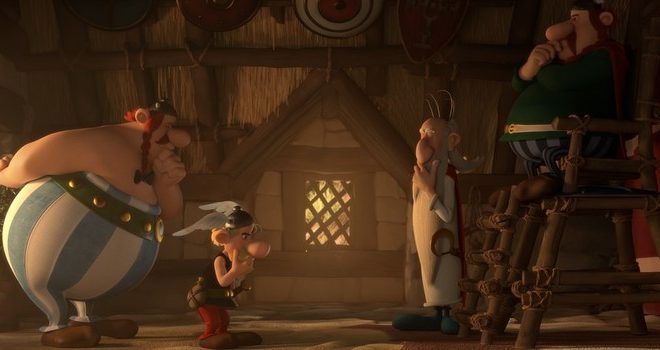 The original French dialogue has been replaced with variously British or Canadian vocal talent (depending on your market): I was blessed to have the British dub which features the likes of Jim Broadbent and Nick Frost amid the talent. The trouble with a direct translation is that a lot of the English needs to be said at a far more rapid clip than the animation might comfortably allow, with a lot of dialogue having to trip over itself simply to exposit the plot and jokes in a comprehensible manner. It’s about the only fault in the film overall, and it’s a small one, but worth mentioning for franchise fans who know these characters and stories well. 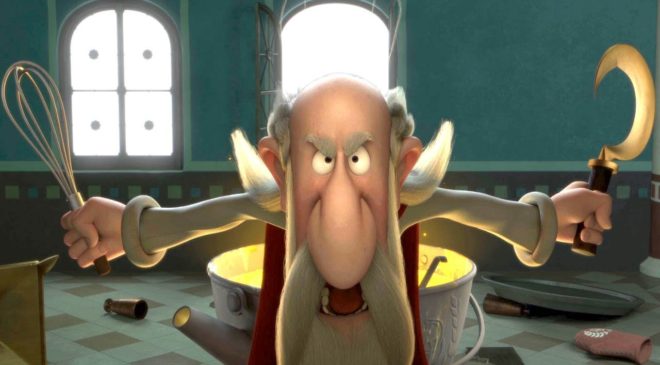 The Mansions Of The Gods is wonderfully animated, brilliantly written and superbly acted by an epic vocal cast of recognisable names, although I wager it will succeed only for those who know what’s going on. New fans or people entirely unfamiliar with the concept will probably check out early, simply because the film never takes the time to “catch you up” on what you’re about to see, and for that I would recommend getting to read the original stories on which the film is based before seeing the film itself. As an Asterix film for Asterix fans, however, it’s a laugh riot and a genuine crowd-pleaser, and I was really pleased with how it turned out.