A knockout, all-star cast doing A-grade work. Terrific writing by Downton Abbey creator Julian Fellowes. Sublime direction from the legendary Robert Altman. Beautiful cinematography and luscious production design, complemented by wonderful location filming and exquisite attention to detail. It’s hard to know just where to start with Gosford Park, this millennial period murder mystery, but I know where it ends: general disappointment. Every aspect of this film seems designed to curry awards and to this end the film largely succeeded (bested in the 2001 Best Picture Oscar stakes by the far less amenable A Beautiful Mind) but I found the film a fairly displeasing mystery experience. The wife and I both picked apart the layered plot and “whodunit” elements with relative ease, and I say that as somebody with a genuine lack of ability to come to a conclusion before the characters in the film do. 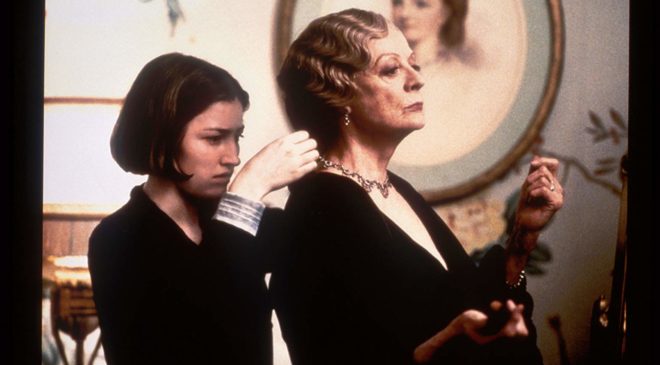 Set on a lavish English estate in 1932, Gosford Park stars a veritable who’s who of British Cinema in this sprawling, red-herring infested murder mystery that takes an absolute age to get moving and even then, spends a lot of time thinking how clever it all is without actually doing anything clever. Michael Gambon (the Harry Potter franchise) plays the garrulous Sir William McCordle, a patronising, arrogant industrialist who hosts a shooting party at his home for many of the country’s wealthy elite, more than a few of whom would like to see him dead. The film is populated by various upper-class types (including McCordle’s younger wife, Sylvia (Kristen Scott Thomas – Four Weddings & A Funeral), the Countess of Trentham (Maggie Smith), and American film producer Morris Weissman (Bob Balaban – Jurassic Park: The Lost World, Full Metal Jacket), while the servants below include head housekeeper Mrs Wilson (Helen Mirren – Eye In The Sky, The Woman In Gold), brooding valet Robert Parks (Clive Owen – The International, Children of Men), and young maid Mary MacEachran (Kelly Macdonald – Brave, Nanny McPhee), all of whom harbour secrets to clues in unravelling the killer’s identity. After Sir William is killed (in the library with both poison and a knife!), Inspector Thompson (Stephen Fry – The Hobbit: The Desolation of Smaug) arrives to try and piece together what happened. 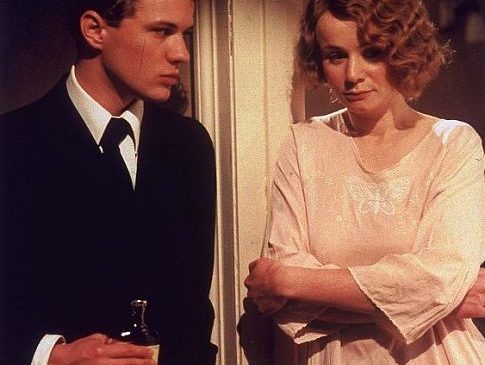 Gosford Park might well be touted as a “murder mystery” drama, but it spends far less time on death and a whole lot of time depicting the British class system post-World War I, an evocative time period tackled two decades later by writer Julian Fellowes by Downton Abbey, a series for which this film contains significant genetic material. The byplay between the servants and their masters, from the cooks, cleaners and footmen to the Lords and Ladies of the land that variously inhabit the estate on which the film is set, provides a large portion of the film’s delightfully droll humour and dramatic weight, with the melancholy sadness of the downtrodden house staff contrasted with the downtrodden sadness of the shallow lives led by those supposedly “superior” upper class folk to the dexterous writing of Fellowes’ pitch-perfect elicitation of society at the time. Gosford Park positively brims with withering examination of the perplexing complexity of British life at the time, of at least the perceived wealthy elite in this case, and it makes for sublimely black viewing despite a dearth of acute intrigue or clever twists. 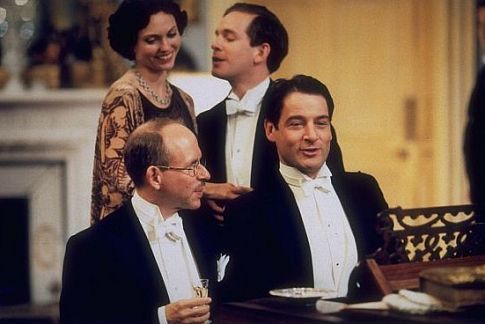 One of the key elements to Gosford Park’s mysterious undertones is a subplot involving a mysterious baby given up at birth to an orphanage, and a man’s apparent history at having grown up in an orphanage. It’s here that the film’s predictability undoes a lot of the otherwise sterling writing Fellowes provides, director Robert Altman taking great effort to literally point out the murder weapons and links between disparate characters, his roving camera ensuring that even the stupidest viewer will grasp a small inkling of how to “solve” the grander mystery within. And when you think the obvious clues are just too obvious to be correct, you’re correct anyway. Guessing whodunnit is a great part of the classic murder mystery trope, but both my wife and I had a good handle on the result well before it should have become apparent. Which leaves a lot of the film’s intertwined character interplay to shoulder the burden of a 2 hour (and change) running time, a hefty weight to handle when most of the “mystery” ain’t that mysterious. It’s not hard to feel grateful to Altman for populating his film with a literal legion of great British acting talent (Ryan Phillipe notwithstanding, playing the role of a young servant who could be an actor researching a role…. whatever) doing exquisite work in bringing their characters to life; it’s a smorgasbord of perfect casting and delightfully spry dialogue, and spotting who’s who is half the fun. 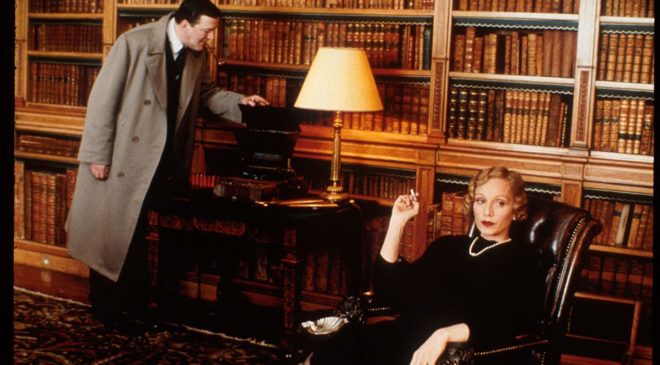 Charles Dance (Game Of Thrones) appears as a partially deaf Lord, Tom Hollander (Pride & Prejudice, Pirates Of The Caribbean) has a minor role as a desperate Lt Commander seeking financial aide, Jeremy Northam dabbles in 1930’s singing as a famous actor/singer/star, Eileen Atkins plays the grumpy Mrs Croft, a housekeeper, Derek Jacobi one of the valets to the wealthy aristocrats above, and Emily Watson as a dedicated maid within the household. The vast ensemble might cause headaches for such an intimate story but the actors – particularly Maggie Smith, who is positively delightful, and the always magnetic Richard E Grant, who plays another servant – do excellent work with roles both large and small to give the film a genuinely fleshed out canvas. Gosford Park feels inhabited by people, not just actors playing people, much to my amusement. The screenplay sparkles with undercurrents of illicit affairs and angsty interpersonal relationships, not to mention hidden agendas and personal grief, some of which is alluded to and never revealed, and some of which is revealed without even an expectation. It’s a perfect precursor to more recent productions of similar aesthetic (I’ve mentioned Downton Abbey, and its that show which owes a lot to Gosford Park’s sprawling textures) but even with a substantial running time to play with, Altman’s movie moves at a positively glacial pace. 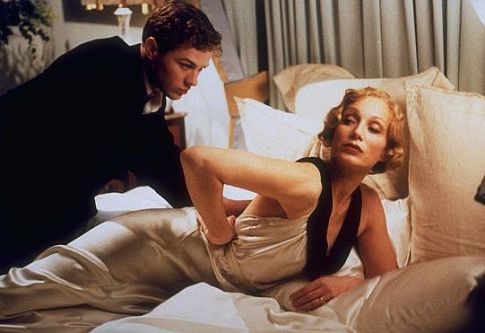 In most murder mystery films, the ensemble is set up quite quickly, giving us all the relevant intrigue needed to try and determine “the killer” before it happens, then the killing happens and the bulk of the film or show is spent watching the characters work out whodunnit. The reverse is true of Godford Park: McCordle’s murder doesn’t occur until nearly two thirds of the way into the film (at about the 1 hour 15 minute mark), with the preamble to the killing taking an inordinate amount of time to transpire. The build up isn’t worthy of such drawn out lengths, either, with Altman unable to generate legitimate tension in the audience as we are awaiting the inevitable gruesome act. He sprinkles in some obvious red herrings and puzzle pieces (I worked out who stabbed the old man quite easily, which perhaps wasn’t the point of the film’s murderous plot in any case) but spends a lot of time dwelling on the social mores and character byplay than I expected, not all of which is either required or resolved well. Some of the character work goes absolutely nowhere, too, making for frustrating resolutions at the close, and dense motivation, while catching canny Oscar voters, will confuse less applicable audiences. The pacing feels mysterious at first, but by the end becomes simply tedious; most films breathe with life, having moments to excite the audience with speed and then pause to catch a breath, yet Gosford Park moves at the same stately pace throughout, refusing the engage with the audience at any primal level when it can attempt to (with varying degrees of success), and making it hard for any viewer to really feel for what’s going on on the screen. There’s a distance wrought by indifferent excitement: you’ll find this film either an enthralling intellectual exercise or a slow-moving melodramatic sloth, with no middle ground option. 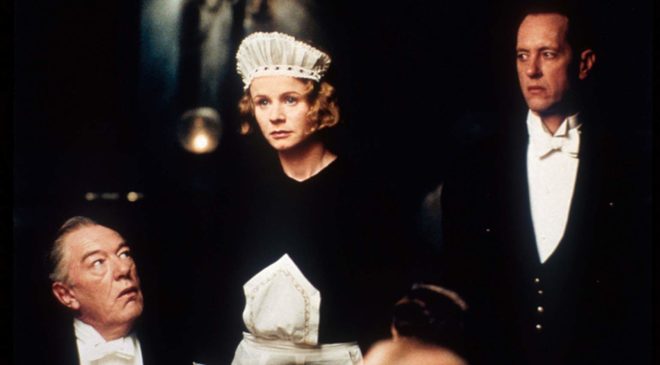 Gosford Park isn’t as clever as it thinks it is, but it is still an opulent, magnificently cast thing to witness. Held together by sheer force of star power and crafty, sublime dialogue, Gosford Park’s mystery elements doesn’t work like I’d hoped it would despite superb production design and location filming. In the end I was disappointed at just how easily I guessed several of the outcomes, and I couldn’t work out whether the film hoped to be a mystery drama or a dramatic mystery, but it wasn’t either of those things with the heft required to do them well. Handsomely mounted, Gosford Park is a curious precursor to Downton Abbey’s more prestigious, serialised room-to-move antics. Even with a relatively constrictive 130-odd minute running time there was a lot here that didn’t need to be. Maggie Smith, as she always does, rules the roost and commands the screen, while the lesser beings beside her do equally solid work as well. Worth a look.