Some references for our review were obtained from this Silent Era article about The Lost World’s reconstruction and home video history.

The Lost World represents a milestone of visual effects in film. With the talents of Willis O’Brien behind the camera developing the stop-motion techniques he would go on to perfect for 1933’s King Kong, this dinosaur-adventure themed sci-fi spectacle has been fully reinvigorated on HD BluRay thanks to Lobster Films, and is presented in as complete a version as is possible with the surviving film elements. For decades, much of The Lost World was considered lost – the public domain version ran just over an hour – until recent efforts to preserve and restore disparate reels of film presented us with a “re-edited” version which forms the basis of this review. Using alternative takes and shots derived from international prints of the film – the original negatives were destroyed back in the late 1920’s, at the behest of the producer’s widow (who owned the rights to the movie) and only First National, the original distributor, retained a print for archival purposes. 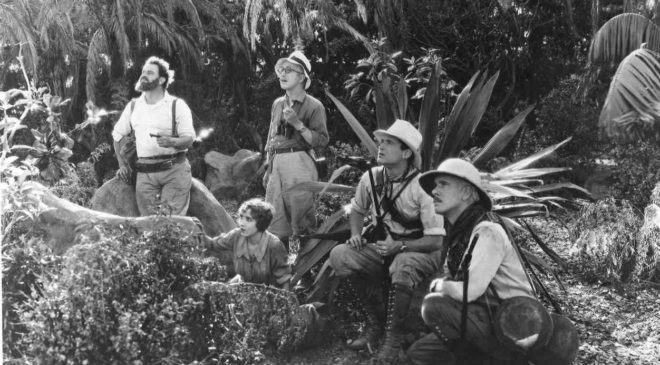 It is, without doubt, the template film for all within its genre to follow: the archetypal monster adventure film, traced quite well by the likes of King Kong, Journey to the Centre of The Earth, and even more recent iterations such as Jurassic Park and Kong: Skull Island, to name but a few. A group of willing human beings venture into a landscape populated by ancient prehistoric creatures in order to a) bring back a specimen or b) rescue somebody or c) both of those things, The Lost World sets the tone of exploratory adventure and jaw-dropping visual effects that Hollywood has emulated verbatim ever since. Harry O Hoyt’s film features some truly remarkable early 20th Century stop-motion animation to bring the story’s sauropod stars to life, while the human elements within offer requisite romantic interludes threaded in a manner not entirely out of place here. 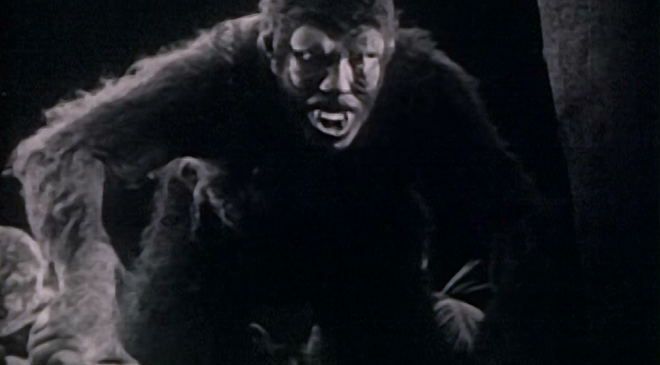 Danger and romance are terrific bedfellows in cinema (vis a vis Keanu Reeves and Sandra Bullock in Speed, as a prime example), and the venerable Arthur Conan Doyle’s novel, on which The Lost World is based, throws plenty of that melodramatic urging into the film where possible. Doyle himself makes a small cameo at the reconstructed film’s opening, before the film begins its odyssey to take us deep into the South American jungle. Young London newspaper journalist Edward Malone (Lloyd Hughes), in attempting to woo the beautiful Gladys Hungerford (Alma Bennett) finds himself intrigued by the claims of zoological expert Professor Challenger (Wallace Beery), who has returned from the deepest jungles of the Amazon claiming to have encountered dinosaurs, animals long thought extinct today. Challenger is jeered by his peers, despite the written proof of the diary of one of his expedition’s lost members, one Maple White, whose daughter Paula (Bessie Love) is distraught by his absence. Under the guise of a rescue mission to locate the missing Maple, Challenger, Paula, Ed and Ed’s benefactor Sir John Roxton (Lewis Stone) set about voyaging back to the jungle, and there they encounter the living proof of an ancient animal population and all the dangers therein. 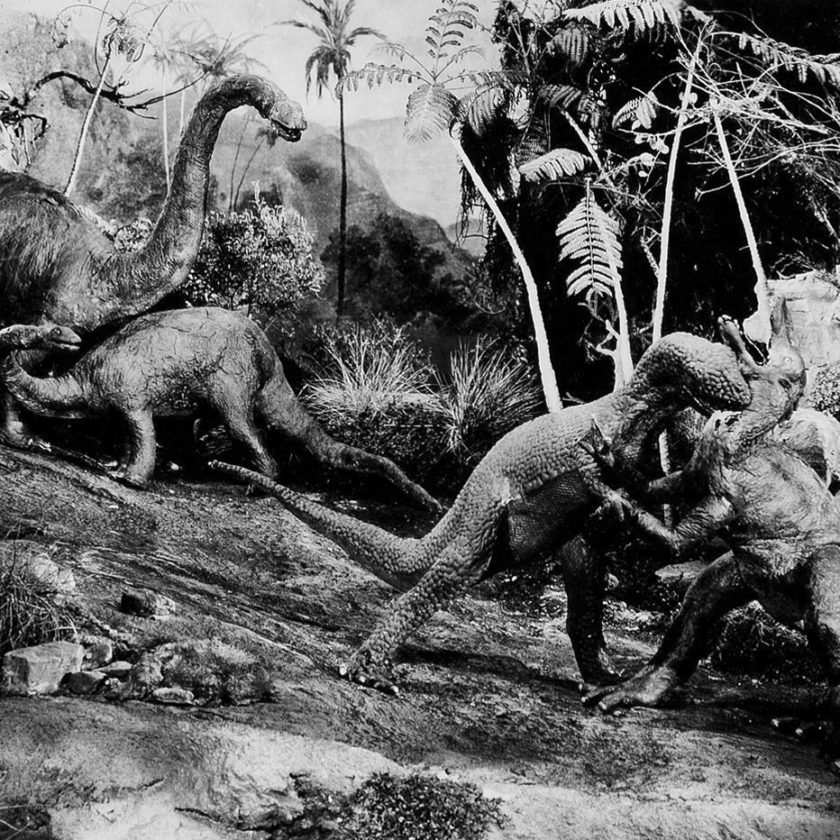 Like any great monster movie, the success of it rides in building the audience’s anticipation. You know you’re going to see creatures of some sort, and The Lost World certainly delivers on that promise, but the film also does a solid job teasing, teasing the audience with a lengthy expositional opening act that, at least to me, serves to frame the dramatic and romantic subplots intertwined through the narrative. From the garrulous Professor Challenger to the erstwhile Paula White and the bizarre collection of supporting actors throughout, The Lost World builds on mystique and anticipatory atmosphere with consummate skill, director Harry O Hoyt (brother to one of the actors in the film, Arthur Hoyt, who plays the blithering Professor Summerlee) deftly places his characters within a fully realised world of dinosaur antics and dank, hidden jungles. For a film nearly a century old, it’s startling to see just how vivid the execution of the film’s bold premise is, using the magnificent stop-motion animation of Willis O’Brien to astutely creative degrees. For it’s time, the story was no doubt a newly born classic, but the tropes and plot points The Lost World hits are relatively cliched by today’s standards: much of the film’s latter half mirrors the later film of King Kong, in particular with one member of the party wanting to bring back “proof” of his discovery to show the world; in The Lost World, a giant brontosaur ends up tearing through the streets of a misty downtown London, which has plenty of cool effects to bring to the screen. The old “monster on the loose” gags get a fair run here too. 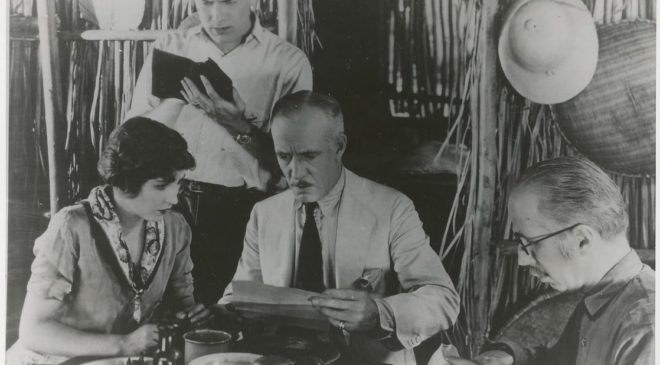 The dinosaurs O’Brien has crafted are fairly limited in their details, by today’s standards, and the animation is somewhat clunky and jittery in places, but the anachronistic nostalgia of seeing these kinds of practical effects brought to life with so much craftsmanship and care overrides any inhibitors the technical skill might engender. Frankly, some of the shots and effects O’Brien was able to assemble are nothing short of jaw-dropping – watch as blood drips off the jaw of a vicious Allosaurus, a giant pteranodon flies through the sky, and a magnificent brontosaurus plummets from the edge of a tepui to a muddy lake below, all with exceptional attention to physics and laws of gravity – and I admit to being mightily impressed considering the film’s vintage. The fact that they were able to put the actors alongside the giant beasts within the same frame of film in 1925 and have it look convincing is chief among the film’s successes. 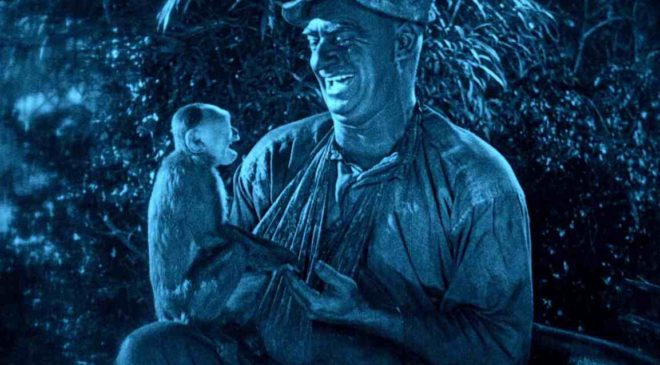 The cast of humans within The Lost World all do excellent work too: Bessie Love and Lloyd Hughes make a wonderful on-screen couple who find love amid the dino excrement, Wallace Beery’s angry, bearded Professor Challenger is worth a chuckle or two, and Lewis Stone makes a commanding job of John Roxton, who harbours his own desires for Paula White but allows the natural romance between her and Ed Malone to blossom unhindered. There’s an actor in blackface – Jules Cowles, as the “native” porter Zambo – which may trigger some viewers, a man dressed as a giant “missing link” ape (Bull Montana) reminiscent of the ones from Kubrick’s 2001: A Space Odyssey, a few actual primates in a monkey and a chimpanzee, and the film’s wonderful jungle photography and miniature effects look really cool. The musical accompaniment on the most current version of the film is by Robert Israel and contains a number of recognisable classical tunes (among them, Elgar’s Pomp & Circumstance), and the film’s visual style holds up well under the high definition glare, even when the available elements show signs of wear and tear congruent with the film’s age. 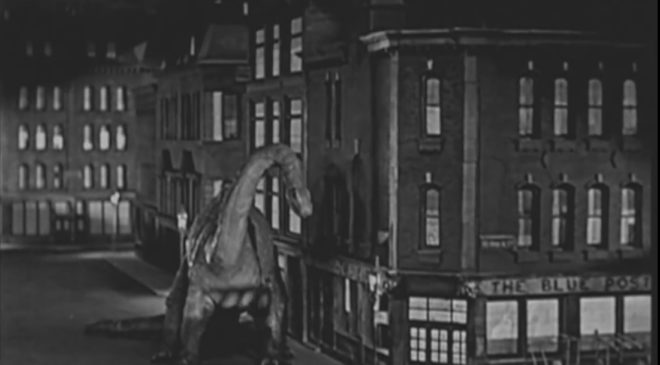 The Lost World is a showstopping tour-de-force of stop motion effects that are placed front and center throughout the action-packed second half of the movie. As with all great creature-features the director knows how to play to the audience in giving them what they want, and whereas Spielberg’s Jurassic Park accomplished greatness by keeping a lot of that film’s effects hidden off-screen for much of the movie, with The Lost World it’s all up on screen, once the characters arrive in the jungle. For a film of this vintage to have achieved so much technical wizardry boggles the mind, and hats off to Willis O’Brien and his team for maximising the budget to create some of cinema’s most legendary early-era special effects. We kinda take this sort of thing for granted today, what with Aardman and Laika upping the ante on stop-motion perfection, but looking past the 1920’s clunkiness and cheesy nature of the plot, The Lost World is a masterclass in tone, style and atmosphere. It builds the sense of dread, romance and excitement with exquisite perfection and parlays a fairly simple adventure story into a legitimately enthralling exercise in early blockbuster entertainment.