The first of Hollywood’s big-budget feature film versions of HG Wells’ classic sci-fi story of martian invasion, Byron Haskin’s 1953 technicolor opus is immediately indelible and astoundingly iconic. It’s also wondrously inventive, showcasing then-state-of-the-art visual effects to their grandest, most effectively chilling potential. It’s also easy to identify thematic and visual motifs lifted wholesale by Steven Spielberg for his 2005 remake, from the sounds of the alien invaders to several key scenes the filmmaker would replicate using modern visual effects. Make no mistake, however, the ’53 edition of The War of The Worlds is dynamite even today, albeit a touch kitschy and trite (and overly melodramatic), remaining an enduring classic thanks to genuine thrills and chills that bring Wells’ brilliant psychological terror test to vivid life. 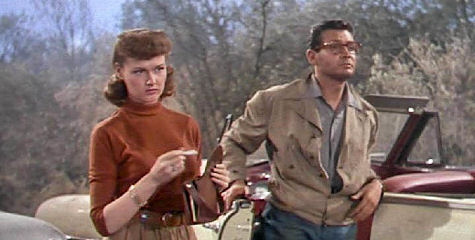 Rural California, and the life of atomic scientist Dr Clayton Forrester (Gene Barry) is shattered when an enormous alien vessel appears to crash-land near the town of Linda Rosa. Upon investigating, Forrester meets local girl Sylvia Van Buren (Ann Robinson) and her uncle, the town’s pastor, Matthew Collins (Lewis Martin). As the military arrives to investigate, the vessel suddenly opens to reveal an enormous martian death-machine, spitting a deadly heat ray and incinerating all life and infrastructure it encounters. The military, as is their wont, fight back, although no weapons – from the smallest gun to the most powerful atomic weapon in the United States arsenal – appear to make a dent. With major global cities under threat from annihilation, small pockets of humanity gather to try to work out exactly what can stop these malevolent marauders from beyond the stars. 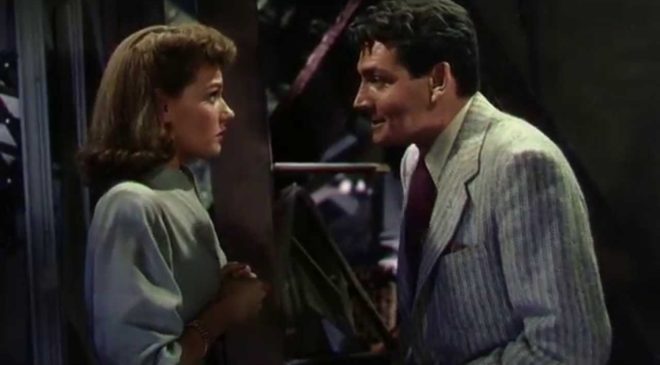 The War of The Worlds is pure 50’s sci-fi cheese. It’s a reflection of the US’s preoccupation with the Red Scare, the rise of Communism and humanity’s brink-of-disaster relationship with nuclear power. As an allegory for our own mortality, few stories have been as unambiguous in its forthrightness as HG Wells’ story, in which invaders from Mars arrive to decimate us all, only to find their ultimate defeat at the hands of our world’s microbial life. Given humanity’s propensity for fear of the unknown, and our typically “shoot first, ask questions later” approach to the things we fear, War of The Worlds’ redolent apocalyptic narrative resounds with the perplexing histrionics of our neutered military might as well as the discord of wailing destruction, and the confounding insertion of ripe religious subtext betwixt the explosions and the howl of martian machinery. 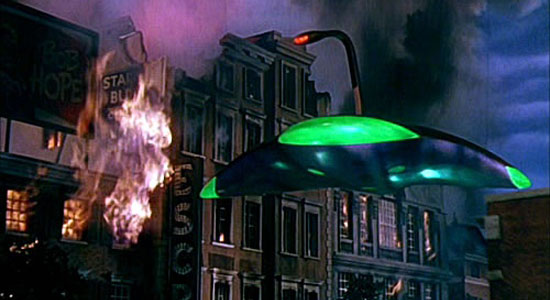 The screenplay is handled by Barré Lyndon (no, not the Kubrick film), and features a number of genuinely creepy and memorable sequences of tension and dread: notably, a scene in which Forrester and Sylvia become wedged inside a partially collapsed farmhouse where they encounter a bizarre alien “periscope” and actual creature (which is your typical rubber man-in-suit-puppet creation), and the now-ubiquitous deserted streetscape of some downtown metropolis through which our heroes desperately prowl, provide legitimately evocative moments against the backdrop of imminent human extinction. The dialogue is nothing if not perfunctory, and the exposition and leaps of logic are pursuant to the film’s brisk running time, while the performances range from excellent to routinely contrived. 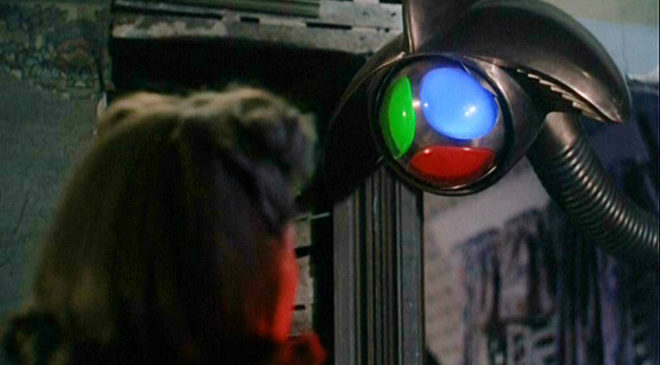 Marking the former is Gene Berry, as Forrester, who happens to always be in the right place at the right time for the audience to follow along as the plot and point unfolds. Berry’s performance is solid if somewhat flat, although he’s ably backed up by the luminously hysterical Ann Robinson, as his love interest. Robinson’s character is the cliche of mid-Century sci-fi spectacle, all screamy, hysteria-loving damsel in distress, and a woman for whom getting a single hair out of place throughout her trials and tribulations is an effort in the impossible. Despite surviving an actual place crash with no physical injury whatsoever, crawling through a sewerage pipe, encountering an alien craft slamming into their hiding spot and subsequently having a martian lay his tri-digital hand upon her, Robinson’s Sylvia never seems to fatigue or show any signs of wear or tear. Both have a chemistry befitting the nature of the plot, and neither are roundly poor, rather they manage to be serviceable. 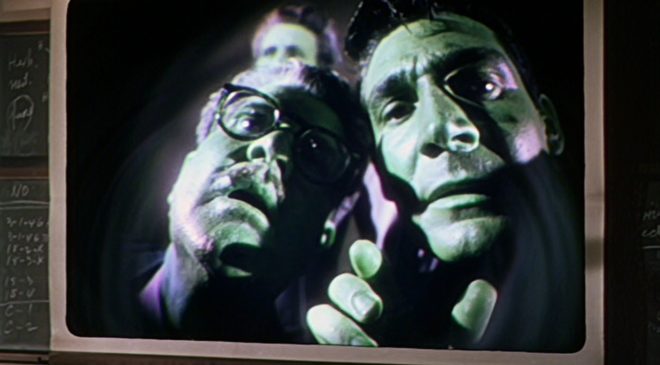 Supporting roles to the likes of Les Tremayne, as the dependable General Mann (who orders the military action), Bob Cornthwaite (as the venerable Dr Pryor) and Lewis Martin (as the resident Pastor Matthew Collins) provide a wider canvas of ideologies and human subsets – notably, it’s the theological paradigm inserted into the film’s latter stages that proves the most astonishing; it’s always been a belief that the arrival of aliens would inherently disprove the notion of God – or a supreme being of any kind, really – which makes it surprising that in their time of greatest need, humans would congregate within the churches of our society for protection, both physical and spiritual, despite the Martian slaughter seemingly offering irrefutable evidence that humanity – and subsequently our deities – aren’t compatible with our belief us being a God-like form. What kicks off as an outright science-fiction examination of our first contact with aliens turns into a treatise in using faith as a cornerstone of survival, despite it being usurped by the invading creatures.

The War Of The Worlds also boasts some quite startling visual effects, especially given their vintage. The alien ships that arise from their landing craft (unlike Spielberg’s film, these aliens haven’t been buried here since time immemorial) and the destruction of the Earthly landscape wrought upon humanity is brilliantly conceived and executed, from full-scale to models obliterated in ever moment. The sound effects serve to enhance the sense of dread as the martians approach, that pitchy whine and pulsating electrical throb accompanying the very deadly heat blasts, while Leith Stevens’ accompanying score is ethereal and magnificent. George Barnes’ lovely Technicolor cinematography, with its vivid hues and magnificent depth, looks superb in today’s HD technology and the blend of mattes, rotoscoping and rear projection techniques is near-seamless. As a technical exercise, The War of The Worlds holds up brilliantly. 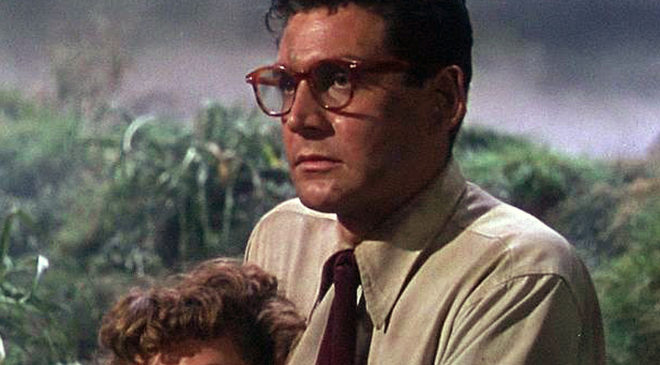 Fear not the film’s age or its occasionally cliched performance tropes (the only way a man can silence a hysterical woman is to shake her vigorously, apparently), for there is fun and excitement to be found in The War of The Worlds’ first foray onto the big screen. Captivating period effects and some legitimately creepy moments of terror make for enthralling viewing even now, and the genetic material inhabiting Spielberg’s more forceful take on the story later can easily be spotted. The direction is appropriately staged for 50’s audiences, the alarming nuclear option feels strangely modern, and the memorable narration dialogue (here performed by Sir Cedric Hardwicke) underpins the visual dynamism on display; this is a well made film, for sure, and perhaps because of its vintage somehow worms its way into our collective subconsciousness and taps into that base fear of the unknown that to this day plays a large part in our way of life.