Sheer star wattage is the order of the day in Stanley Donen’s classic mystery-thriller Charade, once described as “the greatest Hitchcock movie Hitchcock never made”; as true a statement about a film I don’t think I’ve read, for Charade is a perfectly succinct Hitchcockian tale in the best possible manner. Replete with double-crosses, plot twists and villains-who-may-or-may-not-be-villains, Charade’s Parisian setting and the addition of Cary Grant and Audrey Hepburn as romantic leads – this despite a two decade age gap between them – Charade balances the mix of violent crime and bumbling screwball comedy with ease, and Donen’s deft direction together with solid production value enshrine it’s classic status as one of Hollywood’s all-time great genre pictures. 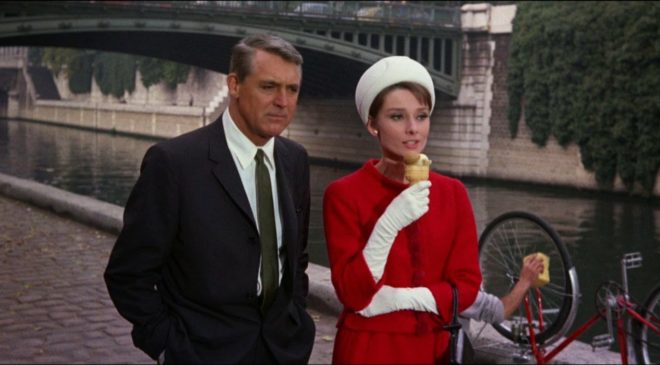 After her husband is mysteriously murdered aboard a train, young translator Regina “Reggie” Lampert (Hepburn) returns to their Paris home from her alpine holiday to find it stripped bare; the police notify her that her husband sold all their belongings before he was killed, and that money to the value of a quarter million dollars is now missing. Unknowing of where the missing loot may be, Reggie is befriended by American stranger Peter Joshua (Cary Grant), who initially attempts to help her track down the wealth. Reggie also find herself pursued by three strange men, Tex Panthollow (James Coburn), Leopold Gideon (Ned Glass) and the one-handed Herman Scobie (George Kennedy), all of whom lay claim to the money. Reggie is also assisted by CIA Agent Hamilton Bartholomew (Walter Matthau), whose knowledge of her pursuers enables her to remain one step ahead. It’s only when the identity of her friend Joshua comes into question that Reggie learns not everyone is who they say they are. 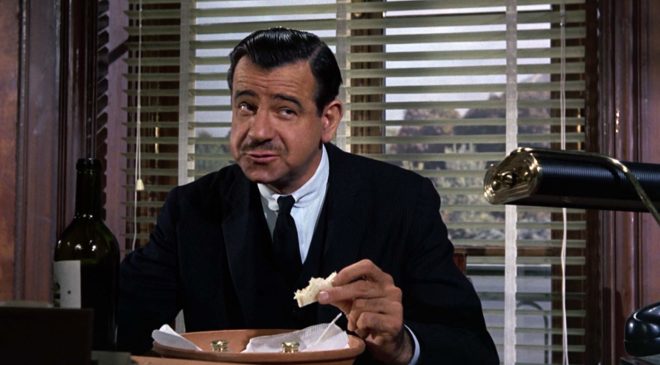 Okay, let’s get the icky stuff out of the way first. Cary Grant is old enough here to be Audrey Hepburn’s father, and it shows. Whilst Hepburn was strikingly beautiful, youthful and with that innocent glimmer in her eye, the greying, ageing visage of Grant – while still handsome, a little like George Clooney these days – stands in stark contrast to her screen presence, making their romantic entanglement a touch creepy to modern eyes. Some twenty five years separated them in age, which Grant notably felt uncomfortable about enough to have some jokey lines thrown into the script to actually reference it, but even that isn’t enough to make watching Hepburn and Grant’s passionless kisses anything other than skin-crawling. Thankfully, however, the film doesn’t focus on this aspect as much as I’d expected, revelling moreso in the crime and thriller aspect of the story, which, when  it happens, is far more satisfying. 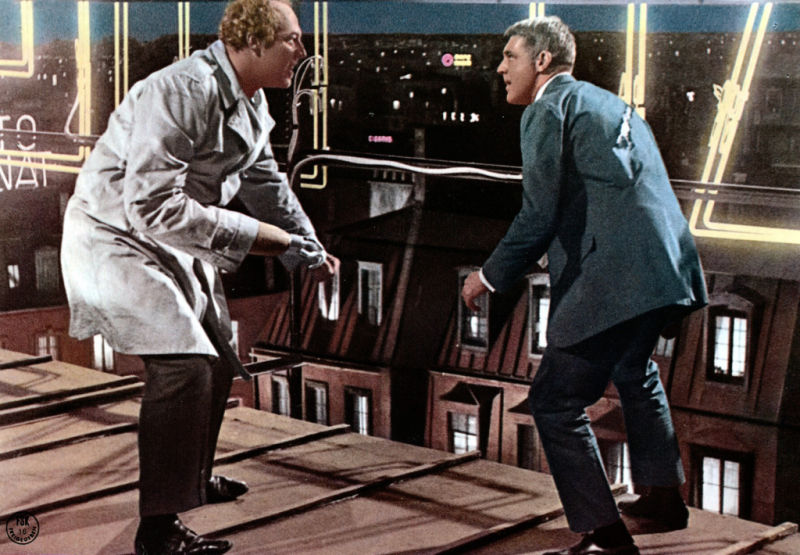 The film’s writing is by Peter Stone, for whom Charade represented his Hollywood debut. The dialogue practically crackles with intended urgency, a breathless Reggie and more sanguine Peter Joshua contrasting wonderfully as the machinations of the “where’s the money” plotline starts to wind up. Genre archetypes abound, from the disabled villain (George Kennedy) to the tut-tutting local police officer (Jacques Marin), to the sweaty bespectacled creep (Ned Glass) and even the ubiquitous CIA subplot (Walter Matthau, absolutely nailing it): there’s little in Charade that’s surprising if you’ve ever seen… you know, a film, but it’s the way it’s all handled by the criss-crossing plot and wonderful character interplay that brings Charade to life. Multiple chase sequences and subterfuge-driven twists and turns offer some clever turns of phrase and enhance the already beautiful Parisian location shooting (the city’s underground railway and out-of-the-way non-touristy architecture certainly plays a large part in the film’s climax), which serves as an operatic backdrop to what is, essentially, a character piece with top-notch actors. 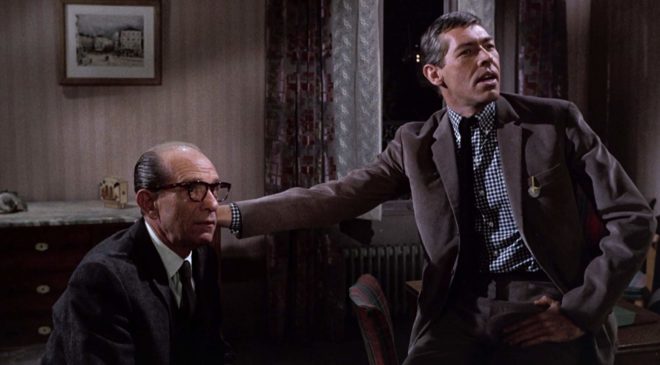 Hepburn, surrounded by what amounts to an enormous Hollywood sausage-fest, scintillates with her breathless, unwitting character’s innocence and gradual descent into panic, and it’s around her that Donen wisely builds the tension in this fabulously silly story. Missing money and a not-quite grieving widow – Reggie was discussing divorce with a friend (Dominique Minot) in the film’s opening scene, which instantly puts us in the frame for not quite trusting her either – make for shadowy criminal leanings, while the quintet of interested male parties surrounding her vault subterfuge into constant play as the identity and truth of each participant starts to become clear. In terms of production value, the set design, sound effects and Charles Lang’s sumptuous cinematography (the scene in which Reggie’s husband lies in the coffin, approached by each member of the cast in various states of anger is a particularly well shot piece, as is the famous rooftop fight between Grant and Kennedy) together with Henry Mancini’s memorable score (he snagged an Oscar for the title track, “Charade”) make the film truly a diamond-encrusted piece of entertainment that never fails to amuse. 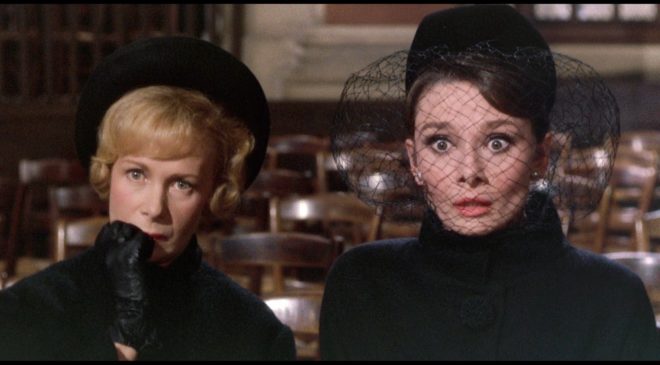 Charade contains all the jigsaw pieces to make up a great Hollywood Movie. That it all works as well as it does is testament not just to director Stanley Donen (Singin’ In The Rain), but to the consummate performances of the actors, and the technical mastery by those working behind the camera. With sizzling dialogue, earnest performances and a wonderful setting in which to occur, Charade’s mystery-thrills will captivate and ensnare the viewer with its period charm and effortless screen charisma.