Very few cinematic films I have seen venture into territory so egregiously awful, so embarrassingly bad, so unimaginably unwatchable, as that achieved by Chris Roberts’ 1999 sci-fi adventure Wing Commander. Based on the director’s own video game franchise, Wing Commander is a Frankenstein’s Monster of tropes and cliches, liberally borrowing not just its junk-tech steampunk aesthetic from any number of other (better) films but wasting an A-list cast with such heinous dialogue it should be considered a crime to have even been written. Then white-hot screen star Freddie Prinze Jr (I Know What You Did Last Summer, Scooby Doo) teams up with recurring B-movie stalwart Matthew Lillard (Scream, 13 Ghosts, Scooby Doo) and up-and-coming model-slash-actress Saffron Burrows (Deep Blue Sea) to headline this astonishingly bad waste of everyone’s time (a film so bad, even Mark Hamill wasn’t credited for a voice cameo he provided) that proves the old adage whereby you can’t make a silk purse out of a sows ear; the dialogue is rancid, the visual effects are third-rate, and Roberts’ direction approaches incoherence the longer this miasma goes. 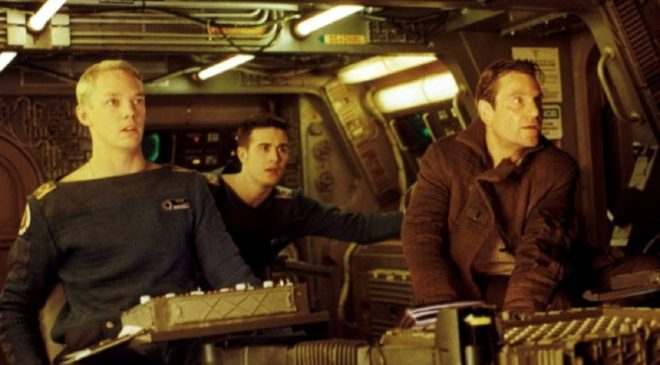 Several hundred years into our future, and humanity has spread into the cosmos, only to encounter the warlike race of aliens known as the Kilrathi Empire. Our army, equipped with vessels build with bubblegum, string and cardboard (apparently) and fighter craft that function like actual airborne jets in space, are in grave jeopardy when the Kilrathi fleet approaches Earth faster than the our lads can manage. Two fighter pilots, Lieutenant Christopher Blair (Prinze Jr) and Todd Marshall (Mathew Lillard) rendezvous with Tiger Claw commander Captain Janson Sanski (David Suchet) to undertake a near-suicidal mission to uncover the strength and plans of the Kilrathi fleet. Sanski’s second in command, Paul Gerald (Jurgen Prochnow – Das Boot) doesn’t trust Blair, given his genetic makeup as one half of a race known as “Pilgrims”, who have special abilities that it is believed started the war in the first place. Blair also encounters Wing Commander Jeanette Devereaux (Saffron Burrows), a ball-busting leader who suffers no fools but beneath her steely exterior is literally just waiting for him to fall for her. Blech. Missions. Explosions. Submarine warfare in space. Last-gasp heroics. Tragic accidental deaths. And Matthew Lillard’s blonde highlights. This film has. it. all.

Forget thinking that maybe Wing Commander isn’t as bad as you’ve heard. It is that bad, and it’s a billion times worse. If, like me, you’re one of the very few who actually went to see it in cinemas, you’ll likely have blocked it from your mind for being so awful. For those who even consider thinking about considering watching this film, can I exhort you in the strongest possible sense to not, to avoid it at all costs. Yeah, Wing Commander is that bad. 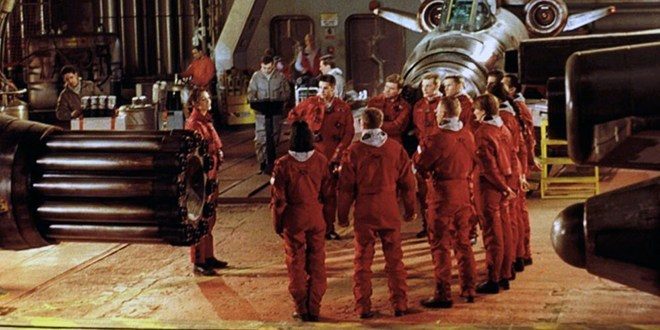 Look, the basic premise is purely cinematic. Alien species, dogfights in space and a reasonably attractive young cast doing all their hoo-rah macho bullshit sounds like a fun B-movie time, right? Wrong! Written by Kevin Droney, the film’s dialogue, plotting and twists and turns are laughable at best, execrable at worst. The film’s hackneyed characters and risible dialogue bury interest within moments of commencing, and not even the gorgeous face of Prinze Jr, all wet-eyed confusion and all, can salvage this shit. Droney’s script calls for a mixture of Star Wars, Starship Troopers, a hundred space-battle movies, a thousand submarine movies, and an over-dependence on frankly ghastly special visual effects. Remember, this film arrived in 1999, the same year as both The Matrix and, to a lesser extent, The Phantom Menace, so high expectations in terms of computer graphics were setup to fail here. Effects house Digital Anvil, which has a significant opening title credit and so must bear the full brunt of this critic’s fury, should be utterly ashamed of their work, a hodgepodge of poorly rendered, inadequately conceptualised and entirely inane CG work that feels more like shitty computer game graphics than big-budget feature film-making. The fact that Wing Commander is based on a video game notwithstanding, we expected and deserved far better.

To their credit, Freddie, Saffy and Matty all put in engaging performances, and were they in a better film with better writing this might have become an underrated cult classic. Instead, Roberts’ manifestly inadequate direction, his raw inability to create any legitimate tension or cohesion between scenes and characters, trashes utterly the audience’s interest almost as soon as the opening credits have finished. The low-fi tech of Star Wars and the high-octane thrills of a Top Gun clone in outer space might have seemed like a good idea, but the shoestring budget allows no width for Thierry Arbogast’s grimy cinematography to really flesh out the world. It’s a film of almost entirely exposition, not an ounce of dialogue is used to define a character or generate empathy; instead, we’re subjected to a barrage of cryptic nonsense-speak about the Kilrathi, warp jumping and all manner of crazy genre ephemera. To be honest, for the first time in a long time a sci-fi film actually confused me. Perhaps it was my rapidly waning interest but Wing Commander’s utterly incomprehensible scripting and scattershot direction aren’t strong enough to overcome inbuilt stupidity in the movie. Watching actors of the calibre of Suchet, Warner and the excellent Prochnow garble their way through scenes full of inexplicably stupid dialogue should be considered a crime against humanity, while good ol’ Tcheky Karyo seems to be having a blast as the recalcitrant Taggart, whose true identity is “revealed” in an unearned plot twist towards the end of the second act. Poor Hugh Quarshie plays a minor role, which makes him two-for-two in shitty 1999 films with his other major release, The Phantom Menace, also landing that year. And if you think that’s bad, wait until you hear British actor Richard Dillane’s astonishingly horrifying Australian accent here. Ghastly.

Wing Commander is a very, very bad film. There’s an argument that had they stuck with the original script (apparently a complete rewrite occurred after Prinze Jr and Lillard had signed on, and both apparently disavowed the finished film in its release), thrown a bit more money at the effects and given it to an actual film director, not a video game designer, Wing Commander might have been at least halfway competent. But we’re not here to judge the woulda-coulda-shoulda: the end result of whatever behind the scenes shenanigans took place on Wing Commander resulted in a film to patently awful, so abysmally bad, so regrettably insufferable, it wasn’t worth it. This film is inexcusably bad in every possible way. It’s a film of irredeemable problematic structure, of crass directorial oversight and spectacularly bad production choices, not the least are the visual effects and the schizophrenic editing by Peter Davies. All I can say is: I want my fucking money back.