In America’s Old West, women had a pretty tough time of it. At the height of a patriarchal society that disenfranchised and belittled women and their low social status, quality role models were almost impossible to come by. Conversely, Jonathan Kaplan’s incredibly pretty Bad Girls shoehorns some halfway decent role models into a Western setting and bastardises its reverse Unforgiven narrative into a proto-feminist action film of indeterminate quality. On the one hand, watching talent like Madeline Stowe, Drew Barrymore and Robert Loggia mix it up with hoary old timey dialogue and accents is pleasant enough, but the film plays like a big-budget telemovie rather than a big-screen venture. It’s as cutesy as apple pie and half as tasty. 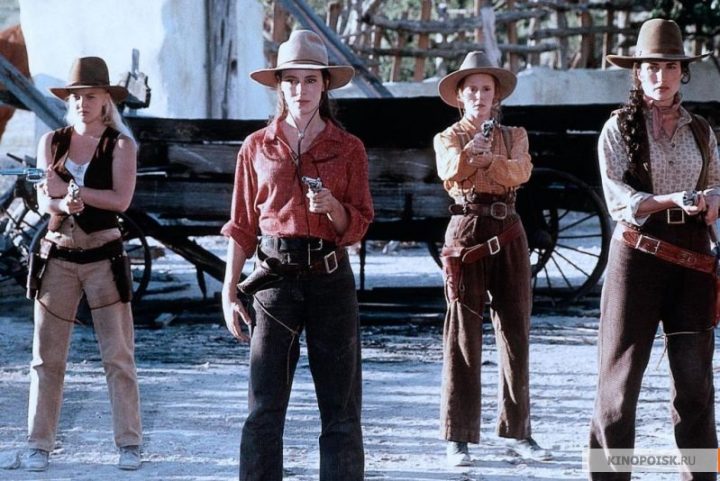 The late 19th Century: at a Colorado drinking establishment, a drunken reveller assaults a local whore, Anita Crown (Mary Stuart Masterson), and is promptly shot by her friend Cody Zamora (Madeline Stowe), which leads the townsfolk to set out to hang her. Cody, Anita, and their two other harlot friends, Eileen Spenser (Andie MacDowell) and Lily Laronette (Drew Barrymore) take off to escape the lynching. The reveller’s wife hires Pinkteron Detectives (Nick Chinlund and Jim Beaver) to pursue the women and bring Cody to justice. 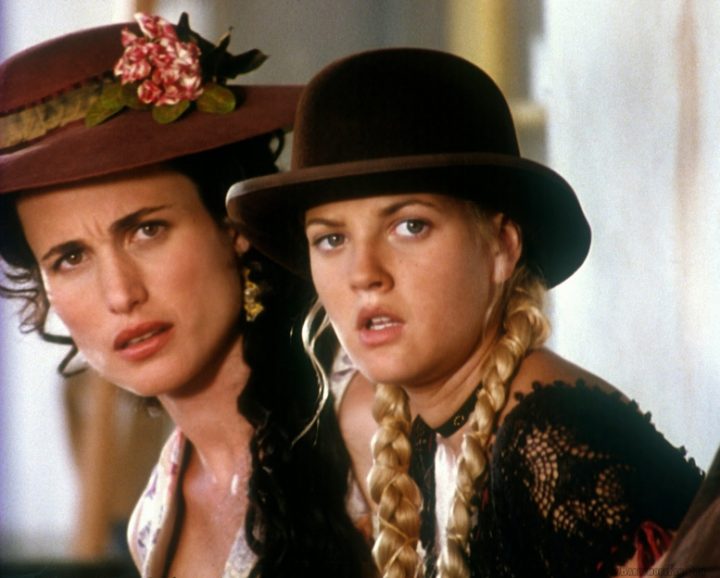 There’s a sense of iniquity to Bad Girls that the film cannot escape. Although populated by a solid cast, including four strong female leads, and filmed throughout some of the most lavish American landscapes, Bad Girls is a tortured, progressively retrograde example of Hollywood capitalising on the early-90’s resurgence of the Western genre, with even the title paying tangential reference to Young Guns‘ all-male posturing. The film’s female-centric focus is different to the more masculine examples of the genre, although in many ways probably far too lightweight to matter, thanks to Ken Friedman and Yolande Finch’s generic script, which panders to tropes and arguably the most indifferent dialogue I’ve seen in a film of this type in many years. The plot confuses depth with exposition, indifferent violence and scant humour the order of the day as the film’s meandering point becomes increasingly diffuse. 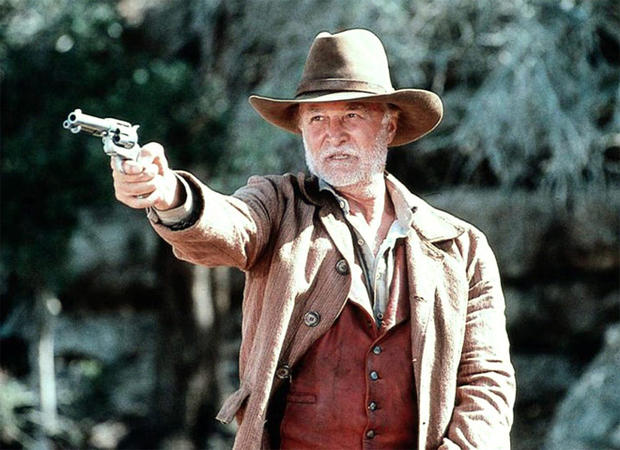 The core quartet of women are only vaguely developed, more often being punching bags for asshole men and disposed to the harsh colonial country in which they have the misfortune to live. Stowe, as their unelected leader, gives her role at least the commitment she’s being paid for, even if the role is nothing more than a heavy-breathing victim of circumstance. Drew Barrymore and Mary Stuart Masterson offer varying degrees of sexy allure (which is fairly groan-worthy, I’ll be honest) and Andie MacDowell struggles to rise above her wooden performance in Four Weddings & A Funeral as the raven-haired Eileen; the film makes these women out to be pioneers of feminine strength at a time when that was exceptionally rare, but I kept getting the feeling that they were mere window dressing or tarted-up avatars that never quite worked as intended. The chasm between good intentions and execution in Bad Girls is vast, and Kaplan’s not a director or the strength to bridge it. 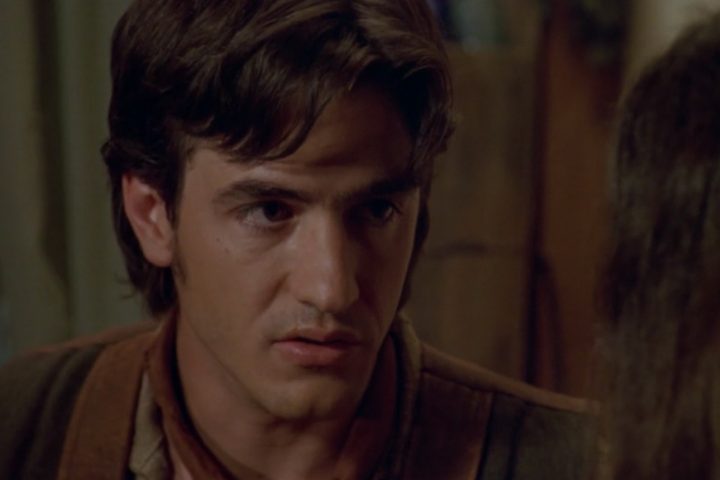 Supporting the girls are, of course, a bunch of handsome and rugged actors willing to grow stubble and wield a six-shooter. Dermot Mulroney brings the sighs and gasps as one of the women’s allies, Josh McCoy, his smouldering good looks the perfect recipe for keeping the ladies watching this movie interested, while James Russo (as the outlaw Kid Jarrett), James LeGos (as rancher William Tucker) and Nick Chinlund (as one of the Pinkerton Detectives sent to capture Cody) offer alternative testosterone injections, but the awkwardly placid tone and suggestions of terrible violence (most of the violence towards the women occurs off-screen, or is implied moreso than it is specifically depicted) conflict heavily, making the film supposedly adult but largely devoid of the grit it so obviously intends. For what it’s worth, the film’s aesthetic skews more towards The Quick & The Dead than it does Unforgiven. It’s an un-serious, seriously misguided attempt to jam feminine heroism and revenge into a genre of film that barely supports it. If you were to attempt a film like this you’d need to really hammer home the brutality women faced at this time, not make it a laced-and-sexy porridge of misaligned provenance. Revisionist history might have played in 1994, but it lacks something terrible today. 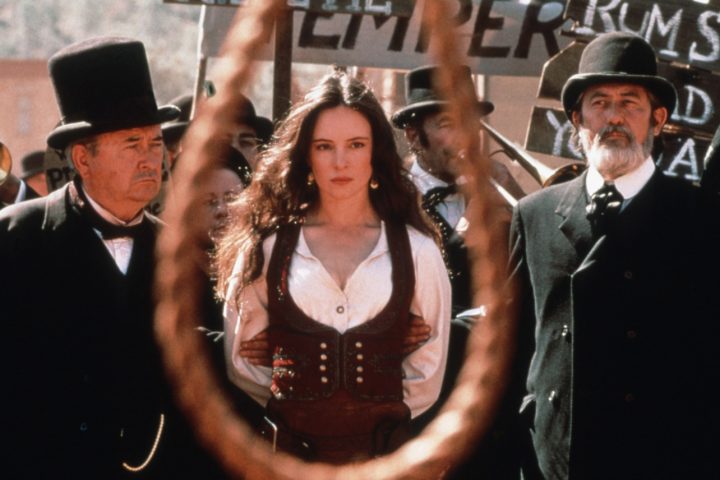 Look, I get it, the film panders to the female viewer in attempting to make these four women forthright, strong-willed and able to survive a harsh environment with their intelligence and wiles. I say pander because the script and character land squarely in the “action movie” realm of smart-lipped clean-dirty (yeah, it looks like they rolled about on the ground just before the cameras fired up) movie stars doing tough-guy speak, and although the direction is such that the action and gunplay do smack of a late-renaissance frivolousness (the film came along barely six years after Die Hard set the bar for this muscular style of action movie) the impact is simply absent any real energy. It’s a fast paced affair, and the ensemble work well together within the context of their story, but Kaplan’s bland direction, terrible action photography and soft-focused melodramatic sudsy lethargy here makes for indifferent viewing. Worth a look for an early Barrymore role (she’s sexy as hell) and Madeline Stowe proving what a class act she truly is to rise above such muck, but Bad Girls is a largely formulaic, cliche-ridden entry into a film genre stuffed with similarly iniquitous fare.