Cult Italian horror director Dario Argento has made some of the most influential and iconic movies of their kind. Profondo rosso (aka Deep Red) is rightly lauded as one of the greatest giallo movies ever made, while his 1977 effort, Suspiria, retains an almost mythic status for genre devotees, and both films have assured Argento a place in the pantheon of horror greats. Packing a visual punch, Suspiria is a journey into a nightmare, a dervish collection of saturated imagery and rock band Goblin’s thunderous score; Argento’s sensibilities behind the camera make the grotesque seem to leap off the screen, a blast of stylised horror that lingers long after the closing credits roll.

American dancer Suzy Bannon (Jessica Harper – Shock Treatment, Minority Report) arrives at a prestigious German ballet academy run by Madam Blanc (Joan Bennet – The Woman In The Window, Little Women) and taught by Miss Tanner (Alida Valli – The Paradine Case). Upon her arrival, Suzy witnesses an expelled student leaving the academy, only to learn later that she was brutally murdered by an unseen assailant. Suzy struggles to fit into the academy’s regimen of bizarre behaviour, the spooky surrounds setting her ill at ease. A student, Olga (Barbara Magnolfi) befriends her initially, while the attention of handsome local assistant Mark (Miguel Bose) draws her favour. Following a series of horrifying occurrences, Suzy soon begins to suspect that something isn’t right with the Academy and its staff.

Suspiria is both red and loud. The use of red throughout the film feels like the viewer is forcibly being dragged into hell, a motif not entirely inaccurate considering the film’s spooky supernaturalism. Loud, because Argento’s use of Goblin’s creepy score overpowers a lot of the aural experience for a raucous hellscape of tonal jarring and screeching malevolence. The film isn’t so much an intellectual expose of the genre, but rather a film to experience through sight and sound. It’s a film brilliantly hued in all manner of turquoise and ruby, all manner of derivation of red thrust into the frame and offering at times garish perplexity to an otherwise fruitful sense of tension. Occasional blooms of blue, green and yellow offset the continued dread red tones, pastels intended to evoke an emotional response in the viewer externally of the inherent madness of a scene.

The character of Suzy, played by Jessica Harper, is our “in” to Argento’s madness, a beautiful innocent thrust into a world of blood and deception. Harper is gorgeous, although her role feels more reactionary than exploratory, a character to which things happen without her actually propelling the action herself. Her nubile co-stars in Stefania Casini, as co-student Sara, and the sensual Barbara Magnolfi, are there simply as dressing to manifest hidden fears and tension, while Argento’s focus on style and atmosphere predisposes the supporting roles to dressing on an otherwise sumptuous banquet table of death. Roles to Joan Bennett as the matriarchal Madam Blanc, and creepy Alida Valli as the school’s vice principal, as well as Flavio Bucci as a blind pianist who meets a tragic end, are enjoyable for their sinister overtones, something Argento is able to accomplish with a mere flick of his camera. A cameo by a very young Udo Kier is also fun.

The story itself isn’t particularly new for those with a deep love of the horror genre, and what drew me to the story was primarily its exotic setting, a “stranger in a strange land” feeling of isolation that heightens the impending tragedy. Suzy’s arrival at the Academy feels more ordained, predestined, than a simple student exchange, the script’s occasionally clunky exposition doesn’t dwell in subtlety; at times, characters give us obvious information we’re meant to remember, in a manner that doesn’t hide the fact something’s wrong. It’s forced story, rather than organic, and the fastidious part of my critical faculties kept wishing the characters weren’t so forthcoming with “oh look, here’s an important clue for the viewer” the whole time, but on the whole it all works. The kitschy 70’s aesthetic (the film was the last in Europe processed using Technicolour) enhances the ragged nature of Suspiria’s suspense, the alacritous script and dubbed performances (I viewed the English dub for the purposes of this review) serving as discordant ingredients in a bubbling broth of terror. 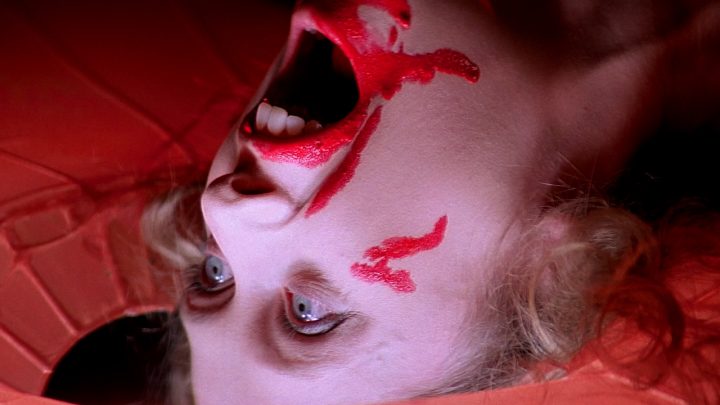 And Suspiria is terrifying at times. The film’s opening kill sequence, in which a young woman is brutally stabbed before falling through a stained glass ceiling to her death, is quite shocking and elicits a legitimate thrill of fear, even if the use of obscenely bright red blood effects and gory prosthetic body parts (we witness a heart actually being penetrated by a knife!) do feel a tad melodramatic. Argento ratchets up the sense of discombobulation and dissonant, trembling fear with some highly stylised camera moves and editing techniques, not all of which worked for me but are electrifying enough to catapult the story forward and stimulate the audience into shock. The pulsating dolly zoom shots the director utilises, something he honed on Deep Red and returns to with great effect here, are his stock in trade, in some manner echoing similar work by contemporary director Sergio Leone in the Western genre. It’s a film of visual panache, a sweet, sweet balm for the eyeballs, colours and hues of all manner jarring to life as the oblivion of doom approaches.

Argento’s wicked sense of humour and subversion of then nascent horror techniques are somewhat passe today, of course, but it’s in Suspiria we witness their birth to mainstream audiences. Jump scares and sinister soundtrack cues combine in perfect unison here, Goblin’s themes and creepy-as-hell music a truly memorable component of this operatically visceral movie. Argento uses breathing, chanting and hissing underneath the music to suggest some incorporeal presence within the academy, and the sound design (aside from the dubbing, which is suitably 70’s bad) is remarkably effective. The film’s vignettes are highly stylised, set design a key feature evoking a moody, uneven vulnerability in the characters and story, as they stumble and clamber through a gamut of horrors designed to terrify.

Ridiculously stylish, beautifully terrifying and altogether a manifesto of inestimable legacy, Dario Argento’s Suspiria is a pulsating exercise in orchestral terror. Forget the structure of traditional film, this is a movie that breaks the rules and arguably reinvents the genre for a new generation. Even its more traditional elements take on a weirdly off-kilter vibe, as if the entire film was a whole Dutch angle you can’t help but want to straighten. The film is a visual fever dream, a magnified nightmare brought to life, a virtuoso performance by the director and one of the most intriguing experiments in horror yet put onto film. A veritable rock opera of horror, Suspiria is a devilishly diabolical landmark of the genre and deserves the status with which it’s upheld. The work of a visionary, Suspiria is boldly magnificent.