Over the last few years, Hollywood has seen a gradual shift in public perception to the casting of its films, whether it be all-female casts, to leading roles going to minority actors – people of colour, people of Asian descent, lesbian and transgender performers – and to a certain extent this is both agreeably “about time” and, in some cases, an overreaction to a situation people need to be careful of. A recent case erupted on Twitter this week regarding the casting of Stranger Things‘ Charlie Heaton in a BBC production of The Elephant Man, as documented in this article over at Top 10 Films, with a charity for disabled persons labelling it as a “missed opportunity”.

The suggestion or inference is that the production should have instead cast a disabled actor in the role of famously disfigured John Merrick (a role popularised by the David Lynch film of the same name), again in the name of inclusion, an argument for which there is significant merit. There has been a lot – and I mean a lot – of outcry for casting decisions of late, specifically by studios who cast nominally against type; straight people cast as gays, whitewashing the upcoming Disney live-action Aladdin with a leading cast of not-quite-brown Arabic people in order to cater for traditionally White American audiences, and having minorities in supporting roles rather than leading.

Obviously, there are precedents, and there have been for a long while. 1946’s Best Picture Oscar Winner, The Best Years Of Our Lives, cast a real-live non-actor amputee in the role of a returning war veteran who had lost his hands, and was having trouble re-acclimatising to a normal life. The dude went on to win two Oscars for the role. The Elephant Man argument being that if you want to cast somebody as a deformed man in Edwardian England, perhaps cast a real-life deformed actor to portray him. Sure, no doubt there’s a lot of actors around with the right kind of deformity to portray John Merrick with some empathy and accuracy. Sure. But could they bring something to the role the casting directors saw in Heaton? We’ll never know. 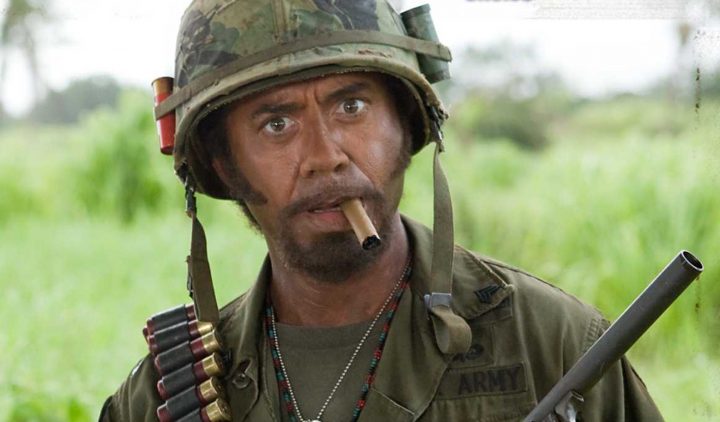 Look, the argument that casting actual gay people in the role of a gay man or woman on screen defeats the purpose of acting, which is to, you know, act. To portray a character, not some variant of yourself. Rupert Everett was portraying straight white dudes for the longest time, and he did it rather well, I must say. The whole idea behind film is to cast a person for the role who can bring a certain sense of truth or believability to it, and inhabit the role completely, but to suggest that only a gay man can play a gay man on screen or a straight man can’t play a role outside of their normal day-to-day life is utterly preposterous. Filmmakers choose their cast with the artistic bent in mind, that is typically the best person to suit the role they want portrayed on screen. Whether that person is gay, straight, black, Asian, or a head in a jar probably isn’t so much the consideration as whether or not their ability can withstand the role itself. Perhaps I’m too optimistic in this, I don’t know.

The cultural shift in Hollywood has been going on for the last few years with recent successes as Black Panther (a predominantly black cast), Crazy Rich Asians (a predominantly Asian cast), Get Out (a film in which a young black man was the lead role in an interracial relationship), the Disney Star Wars films (in which the lead roles are a black man, a white woman, and a Latin American man, or some combination of the three in the case of Rogue One) and more recently the Netflix film To All The Boys I’ve Loved Before, which saw Asian-American Lana Condor shoulder a pleasant romantic comedy without actually making a point of being racially slanted towards her. To wit: there’s a lot of examples of minority led films being successful, and Hollywood, while glacially paced, will eventually find this becoming the norm rather than the exception.

We all understand that there are some lines you just can’t cross with regards to casting the right actors for a role – Robert Downey Jr’s blackface role in Tropic Thunder brought a lot of discussion over racial stereotyping and casting, and I think had that film been made in 2018 rather than a decade ago that entire character and arc might never have made it into the movie, such would be the outcry (go on, suggest I’m wrong). Racism and cultural appropriation on screen is now hugely scrutinised, because God forbid a studio offend anyone with problematic imagery. Today’s Hollywood is more about perception than ever before, even the halcyon Golden Age where an actor’s sordid real life was kept from the mainstream papers to ensure commercial viability. It’s sensible that studios are perceptive to public awareness of minority casting and how that representation can affect their audience, but this perceptiveness shouldn’t become the crutch of minority groups to clamour for such specificity in casting and production. If people playing roles have to actually be the kinds of people they’re portraying, rather than acting a role, it swings the pendulum too far back the other way to make viable sense, at least in my opinion.

I’m all for the depiction of minority groups on the screen, I really am. My manifesto has already been made clear here. I am not affiliated with any particular minority group – as a straight, middle-aged white guy I personify the very thing these minority groups are trying to emulate. What I’m interested in are the characters I’m watching, rather than the actors playing them. An acting performance from a black, Asian, lesbian or transgender actor could be just as moving as that of a straight, white man like myself, which is what our focus should be on. Forcing studios and production companies to cast a gay man in a gay role, for example, is reductive reasoning. The role should be given to the person who fulfils the demand of the role, not some arbitrary quota system for forced inclusiveness.

2 thoughts on “A Matter of Representation: Casting For Performance”