Principal Cast : David Oakes, Ray Stevenson, Aura Garrido, John Benfield, Ivan Gonzalez, Winslow Iwaki, Ben Temple.
Synopsis:  In 1914, a young man arrives at a remote island near the Antarctic Circle to take the post of weather observer only to find himself trapped in a watchtower besieged by deadly creatures which live in hiding on the island.

Based on the debut novel of the same name by Albert Sánchez Piñol, French director Xavier Gen’s adaptation of Cold Skin is an atmospheric, intense survival horror story filtered through the prism of the dawn of the 20th Century, a modern day Lovecraftian Robinson Crusoe meets The Shape Of Water via The Walking Dead. Startling creature effects on co-star Aura Garrido, playing a weird humanoid sea creature domesticated by Ray Stevenson’s garrulous island dwelling role, are one of the film’s many highlights, as Gens’ proclivity for moist, crisp cinematography and highly stylised narrative flourishes deliver a film that transcends its mid-budget setting and maximises the isolated setting with surprising results.

1914, an isolated island in the Atlantic, and an idealistic meteorologist, Friend (David Oakes – Ripper Street, Victoria) arrives to replace the recently deceased previous incumbent, only to find the island populated by a single individual, lighthouse keeper Gruner (Ray Stevenson – Punisher: War Zone). Not long after arriving, Friend discovers that each night the island is overrun by aquatic humanoid creatures intent on killing the men. Gruner has made one, a female named Aneris (Aura Garrido – The Body, Stockholm), into a pet and sex slave, with Friend questioning his humanity in an isolated world in which they aren’t the dominant species. As supplies dwindle, and the ammunition for their limited weapons runs low, the battle for survival heats up as the temperature drops and attacks by the creatures intensifies. 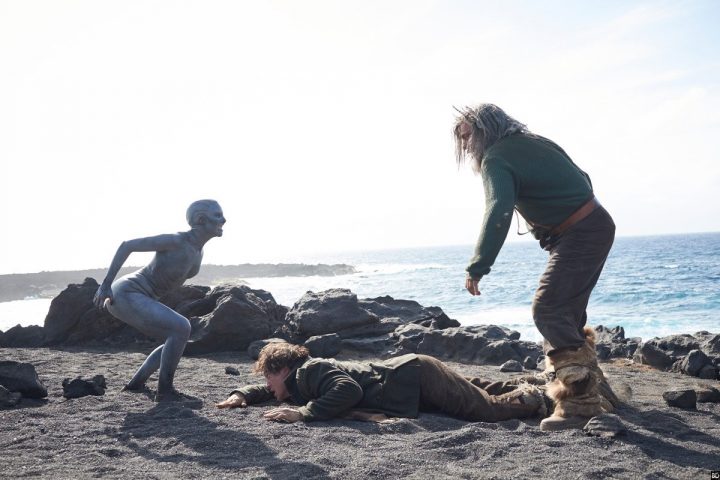 Cold Skin isn’t an easy film to penetrate with any decisive conclusion. It’s a blend of a number of thematic touchstones, from the shipwrecked isolation survivalist drama, a dissection on what makes humans human, to a semi-romantic love story to an outright blood-soaked monster horror flick. Xavier Gens infuses his film with style, a highly tuned atmosphere of tension behind the Edwardian expansion of human knowledge – the film is set at a time when the world was on the cusp of being engulfed in the Great War – and magnifies the inherent terror of loneliness and fear with a superb realisation of the story’s creatures, brilliantly achieved by some superb makeup and prosthetic effects.

Friend is our entry point to the story, we see the world through his idealistic eyes, confronting at every turn Ray Stevenson’s Gruner who, it would seem, is in no hurry to escape their situation. The juxtaposition of their personalities drives much of the film’s drama, as Friend finds his scientific curiosity at odds with his quite rational desire to leave the island and the terror he’s landed upon, and his humanity in attaching to Gruner, who would as soon kill him to live as be his friend for company, makes compelling stuff. Gruner, meanwhile, has lost a lot of his humanity thanks to the horrors he’s witnessed, essentially becoming a rage-filled beast against the unending wave of creature attacks, and while he’s initially a monster himself, the film’s deliberate eventual softening of our fear of him is indicative of the way we tend to bond with those we are forced to spend a long time with in scenarios of terror. 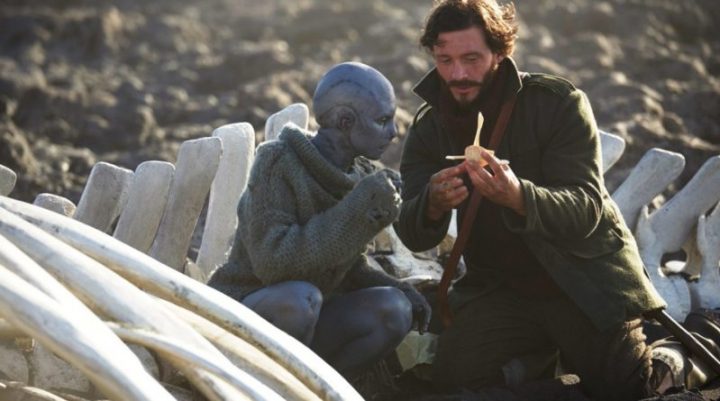 Both Stevenson and Oakes are excellent in their respective roles, representing the disparate nature of man as both killer and curious intellectual, our desire for companionship and innate moral sensibility combating our primal instinct of survival. Co-star Aura Garrido, as Aneris (an anagram of the Spanish “sirena”, representative of ancient myth) does solid work in a limited capacity – she can’t speak, thus we only get a read on her character through actions – and comes across as a vastly sympathetic role in an otherwise brutally tough slog for her. Midway through the film things turn into a Game Of Thrones-esque winter hellscape, snowbound and freezing our heroes are forced to face their own mortality, smothering our protagonists with a dank, inhospitable landscape as the setting for their torturous story. 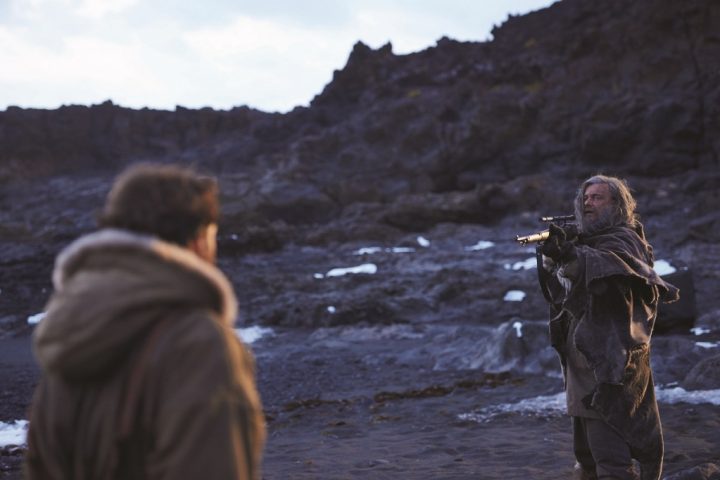 In terms of production, Xavier Gens is a filmmaker I’ve struggled with (he helmed the mediocre first live-action Hitman adaptation) but his work here is a thing of beauty. From the stunning Icelandic locations and Daniel Aranyó’s (Regression, Into The Badlands) exquisite cinematography, Gens makes superb use of the setting in which the story takes place, highlighted perfectly by an atmospheric and sublime score by Victor Reyes (Buried, Grand Piano) that is as haunting as it is powerful. The film’s use of visual effects is well handled, and as mentioned the makeup and creature prosthetics are a thing of beauty. All told, production design on Cold Skin is excellent, with Gens creating a world that feels lived in and believable.

Cold Skin handles its themes well, despite never quite settling on a specific article of intent. It offers broad strokes of sci-fi cliche but executed with a sense of style and purpose by Xavier Gens, whose work on this film is really strong, maximising the available material and giving it an atmosphere of dread throughout. It’s not a film that will readily appeal to all, mind, and I can understand if some have issue with its sense of generic “Aliens meets Robert Louis Stevenson” flavouring, but there’s enough mineral mined here to satisfy the curious viewer, both genre fan and casual newcomer alike. Cold Skin is an underrated entry into the genre’s canon and I think it’s been underserved by a limited publicity campaign.