I guess if you had to swap out Brad Pitt and George Clooney for a #MeToo Ocean’s soft-sequel, you could do a lot worse than incoming headliners Cate Blanchett and Sandra Bullock, both of who do excellent work with style and class as the leaders of the titular jewel thieves of Ocean’s 8. I don’t know if anyone was asking for this movie, and it certainly lacks Steven Soderberg’s particular style (although incoming helmer Gary Ross is more than serviceable), but there’s a fair amount of fluffy fun to be had here watching this ensemble of inestimable female actors dabble in charlatanism and criminal enterprise. I know next to nothing about the Met Gala, other than it’s some fancy pants shindig where celebs and wealthy hobnobbers gather to ponce about, but the show forms the centrepiece in this wildly tepid comedic thriller that’s neither exceptionally funny or particularly thrilling. Ocean’s 8 feels like drinking water at room temperature: it’s satisfying but hardly something noteworthy.

Newly released inmate Debbie Ocean (Bullock) meets up with former criminal associate Lou (Cate Blanchett) to steal an enormous diamond necklace from its appearance at New York’s famous Met Gala. Debbie, sister to legendary thief Danny Ocean (George Clooney is appropriately name-checked via photograph at one point in the movie) also has a grudge against former boyfriend Claude Becker (Richard Armitage), who is responsible for putting her in prison. She and Lou concoct a plan to use superstar actress Daphne Kluger (Anne Hathaway) as a carrier for a famous Cartier diamond necklace, worth some $150m, and plan to steal it from her at the gala. Under tight security and heavy makeup, Debbie and Lou form their own gang to pull off the heist, including jewellery maker Amita (Mindy Kaling), racketeer Tammy (Sarah Paulson), local computer hacker 9-Ball (Rihanna), street hustler and pickpocket Constance (Awkwafina) and semi-forgotten fashion designer Rose Weill (Helena Bonham Carter), each with their own special set of skills. 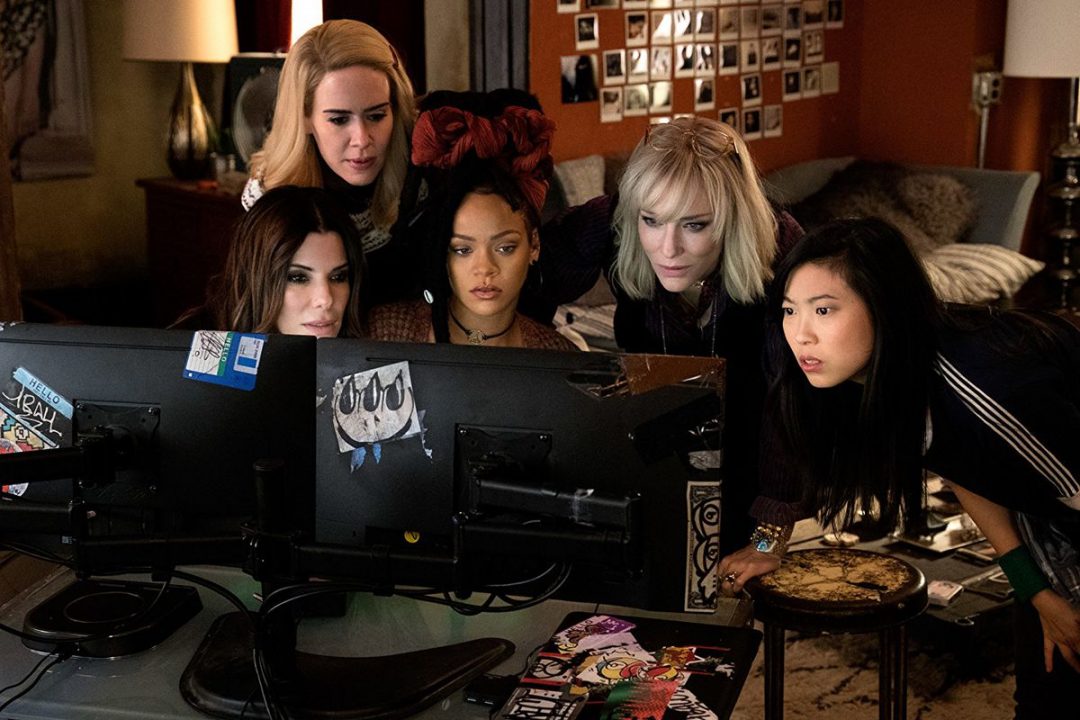 Look, an all-female Ocean’s film was never going to fail. The ensemble cast assembled by Gary Ross and Warner Bros to lead this softly-softly rebootquel film is a particularly high standard, and to perfection everyone looks like they’re having a blast here, weaving in and out of the convoluted plot with panache and grace. The film’s snappy heist cliches work well, subterfuge and misdirections coming from all corners of the screen and a delightful screenplay by both Ross and co-writer Olivia Milch. Assembling the avenging Ocean’s team certainly has that level of cool engendered by both the original 60’s film and Soderberg’s more masculine trilogy and to the credit of all involved you really do feel wrapped in the movie’s sophisticated aesthetic; is it just me, or is watching bad people be bad a whole load of fun? 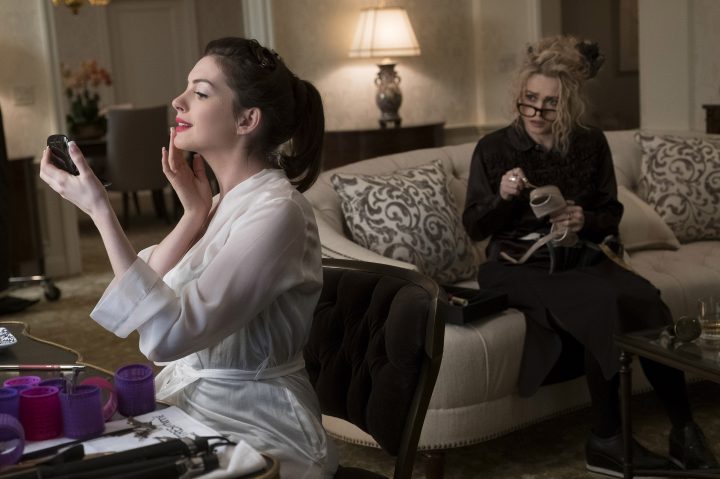 Bullock and Blanchett, leading the charge, are smooth as silk and Bullock in particular handles her associated backstory with Clooney’s absent Danny – he died on the way back to his home planet off-screen, apparently – well, albeit in perfunctory “don’t let this get in the way of the real plot” manner. Blanchett’s character isn’t particularly well developed beyond her blonde bob and penchant for snappy dialogue, something the actress is sublime at, while secondary work from Helena Bonham Carter, as a ditzy, washed up old fashion house disaster, and Rihanna, as a gum-chewing generic computer hacker, provide ballast to this souffle story. Indeed, the characters within Ocean’s 8 are secondary to the plot, a writhing, contorted criminal enterprise of a thing that isn’t as clever as it pretends to be nor as sharp-turn gifted as it needs to be. It’s just there, a simple canvas on which simple art is painted. Ocean’s 8 is a diet-cola of heist movies, neither falling foul of iniquity nor rising above mere mediocrity. 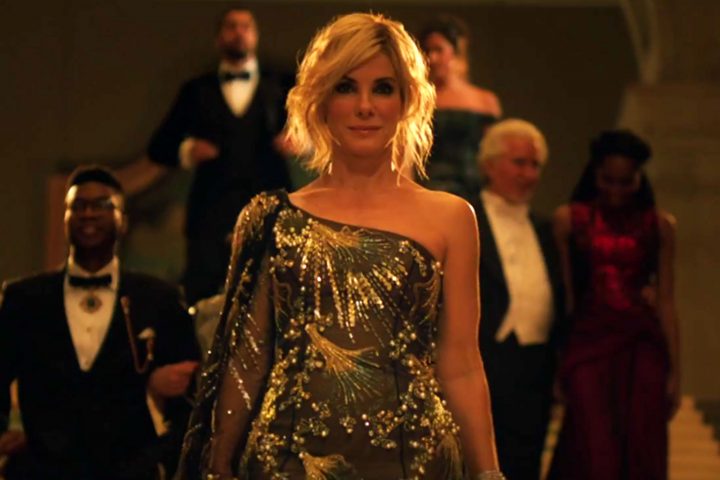 Part of the problem – which feels difficult to swallow considering I legitimately did have fun with this movie – is that there’s no real sense of danger. The plot is as vanilla as it gets: gather the gang, set up their abilities congruent to required plot points, set the wheels in motion and watch the antics unfold. The problem is, at no point do the characters or the plan ever feel really challenged, and this results in a well-executed, entirely successful outcome that leaves one wondering why our investment in the movie was even required. Did Debbie or Lou or anyone involved grow as a character throughout? Was there ever a moment when the audience ever thought our protagonists would be caught? Did the outcome really feel out of reach, unattainable? No, none of this happened in a manner worthy of a big-screen adventure for this franchise. 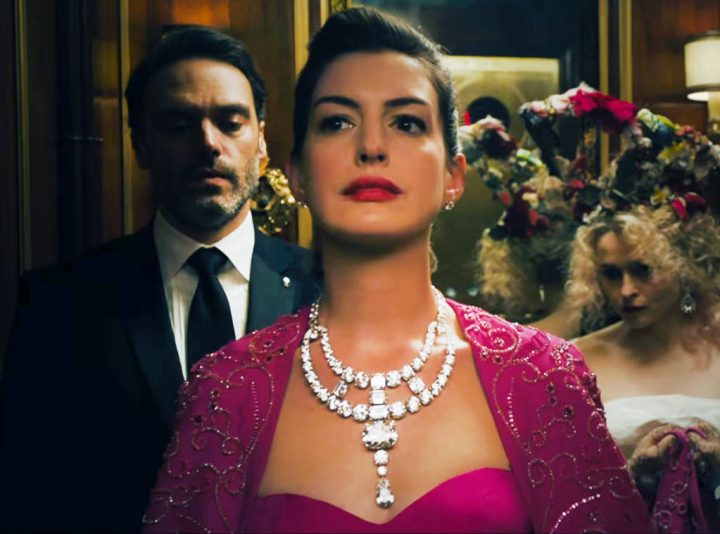 While it’s certainly entertaining watching the likes of Paulson and Bullock and Armitage and a delightful Anne Hathaway (she’s the best thing in this movie by a mile) do their stuff and play up to tropes and archetypes, there was never a real sense of jeopardy, which dilutes the end result and makes for a thoroughly indifferent film experience. At least in Soderberg’s films the villain was a worthy opponent. Here, the villains are two inept security guards – hardly a match for Bullock’s magnificent Swedish accent. Ocean’s 8, while competent and certainly engaging from a “spot the celebrity” perspective (the film is stuffed with celebrity cameos), lacks real meat or depth, and as such feels more like a cheaper bag snatch than a full scale heist. Worth a look, but hardly memorable.