With an impressive Hollywood career tucked away in his back pocket, English writer/director dynamo Alex Garland (Sunshine, Dredd, Ex Machina) has carved a niche of “must see cinema” into his marketability, despite Annihilation, his latest mind-bending journey into astonishment, being given short-thrift by a nervous studio: Paramount handed the film a cinematic release in the United States, but gave up and threw it at streaming giant Netflix for its international release. Sadly, international audiences have been well and truly dudded, for Annihilation is not only a near-perfect film experience, but one utterly deserving of the large screen viewing most of us have missed out on. 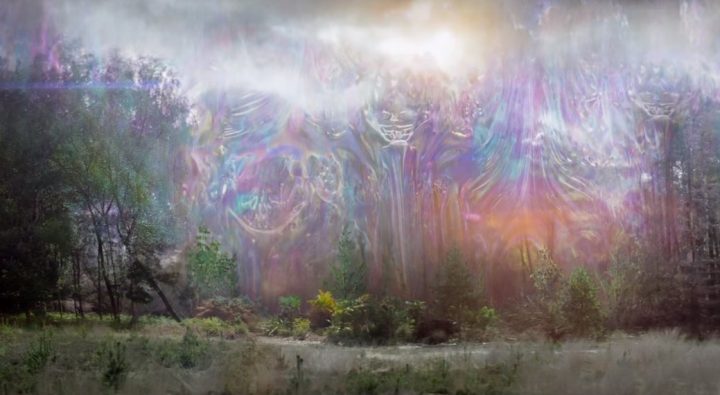 Former soldier Lena (Natalie Portman) awaits the return of her husband, Kane (Oscar Isaac) from a top secret mission; 12 months later, he returns a changed man, and not long after returning he collapses from major internal organ damage. Lena is sequestered to a top secret base near a mysterious entity known only as “the Shimmer”, a slowly expanding field of energy which is most likely alien in origin. Lena, together with Dr Ventress (Jennifer Jason Leigh), and a trio of female military personnel, paramedic Anya (Gina Rodriguez), physicist Josie (Tessa Thompson) and geologist Cass (Tuva Novotny), enter the Shimmer to further investigate its origins. What they encounter will change everything: mutated animals, cross-bred plant life and even possible alien life all mixing to an exhilarating journey into madness.

Annihilation is a very strong film, in almost every sense. The script, by Garland, features an ensemble cast of well developed female characters, a story that unwraps itself much like a JJ Abrams mystery box blockbuster, and enigmatic subtexts that permeate the core mystery, while the visual sense of the film is, in short, spectacular. Themes of identity, of humanity, of mutated nature and coercive alien power make up this enthralling jigsaw puzzle of a film, what with its languid character arcs and tense, moody atmospherics. Garland’s script is based on a novel by Jeff VanderMeer, although from what I’m able to determine very little of the source material makes up the bulk of this movie. This is not a problem, mainly because Garland has taken a mystery motif and attached creepy genetic mutations and fate-of-humanity apocalyptic drive to what is at its heart is a search for meaning.

The film borrows liberally from a lot of iconic cinematic moments. Garland sprinkles flavourings of Ridley Scott’s Alien, Cameron’s Aliens, Coppola’s Apocalypse Now, Peter Hyams’ The Relic (yeah, really!) and even Cronenberg’s The Fly in Annihilation’s stylish, hybrid layers, all of which mirror the central plot conceit of DNA and cellular mutation. The film never feels too samey, though, and overcomes labels of pretension by being clever with its reveals. And there are a lot of reveals. From Lena and Kane (which, let’s face it, has to be a reference to John Hurt’s ill-fated character in Alien) and their relationship, hinted at in flashbacks, to Lena’s combative mode with Jennifer Jason Leigh’s unscrupulous Ventress, Gardland populates his story with byplay and complex character beats that feel savoury and expansive. It’s moreso the manner in which Garland gives his characters room to breathe than it is his straight-up storytelling prowess, which is dynamic indeed, and Annihilation’s core pretext of drama gradually gives way to a final act that feels like the alien encounter in Robert Zemeckis’ Contact. 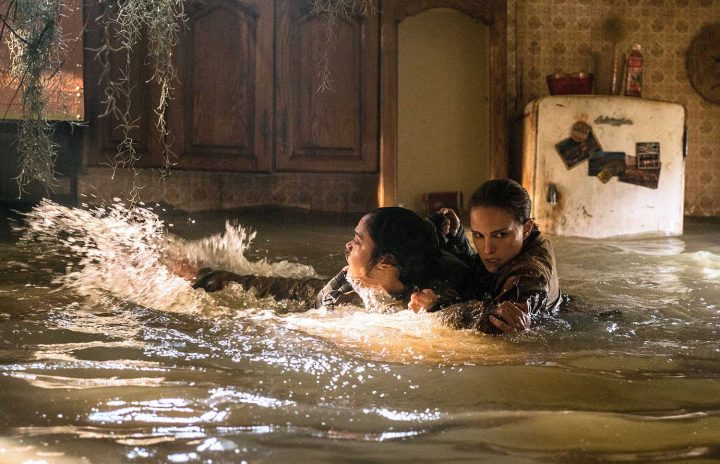 A lot of the film’s lyrically mythic quality stems from Rob Hardy’s ethereal cinematography. If you thought JJ Abrams gave Star Trek too many lens flares, then Annihilation revises the limit on how many anamorphic glints one can shoehorn into a sub-two hour film. It’s glorious to look at, but distracting at first if you’re unprepared. The world outside the Shimmer is devoted to flat, muted tones and a drab, oppressive aesthetic, whilst the look of the movie when inside the Shimmer is beatific, bordering on heavenly. Colours pop when required, and the film’s use of CG effects during its final act are excellent, if noticeable. The film’s violence and gore – of which there is enough to satisfy without being gratuitous – is well realised, and the creatures the women encounter through the movie are believable and well-realised. The best sci-fi has aspects of horror in it, particularly the “there’s something under your skin” stuff, and Annihilation taps into this subgenre with its focus on cells and biology; as a visual treat, the film really does deserve a big-screen treatment. 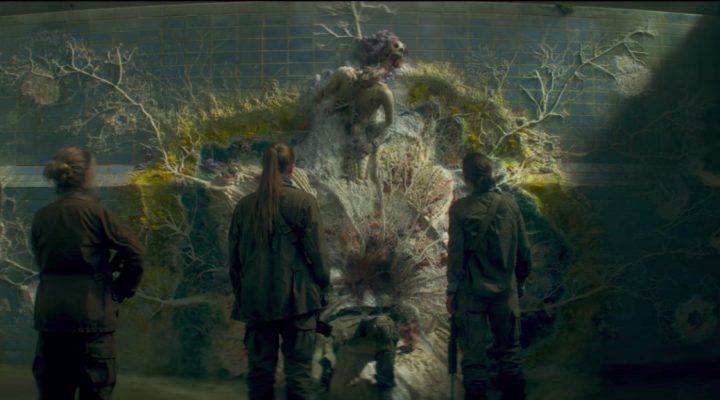 Leading the film is the exquisite Natalie Portman, who gives Lena a real sense of a journeyman representative of humanity with her hidden motivations and corrupted morality. Portman is a fine actor and delivers requisite emotional depth to the role, and more than accommodates the story’s less tangible elements. Co-star Jennifer Jason Leigh appears to be in uptight bitch mode as Ventriss, with flat delivery and a disappointing resolution to her arc within the film being about the only true weakness to Garland’s project. Gina Rodriguez, Tessa Thompson and Tuva Novotny offer fun and interesting tangential supporting characters, all of whom feel vaguely familiar yet utterly fresh. Rodriguez, particularly, does great work with her limited material. Nuvotny is an actress I’m keen to see more of, after this. Oscar Isaac, as Kane, offers an alternately creepy and endearing male opposite to Portman’s Lena, and even when he’s not actually on the screen, his presence if felt throughout. A small role to Benedict Wong, as an interrogator in the military base Lena is at, is nice.

Don’t let Annihilation’s Kubrickian mystery-box unfathomable-ness fool you: this film is a mind-bending trip that will require several rewatches to completely soak it all in. Even then, there’s enough here to have people discussing the film for years to come. Sometimes films that don’t resolve in a straightforward manner tend to be a touch wanky, a problem I had with the end of Christopher Nolan’s Interstellar, but Annihilation earns its stripes by actually being a mystery worth investigating. Garland cements his position as a filmmaker of considerable storytelling talent, crafting a haunting, prickly cerebral venture into the unknown that will captivate and confuse.