As astonishing as it is to suggest, there’s talk among film blogging circles that the trio of Planet of The Apes films released in this new “reboot” phase, consisting of Rise Of The Planet of The Apes, Dawn Of The Planet of The Apes, and now the full-bore War For The Planet of The Apes is one of the best sci-fi trilogies ever made, certainly outside of Star Wars and Back To The Future, and I’m hard pressed to disagree. All three Apes films have applied their thematic material superbly, creating nuanced, well developed characters and scenarios that resound with emotive heft and impactful meaning. War is no different: director Matt Reeves, who helmed the brilliant Dawn instalment, returns to round out the franchise’s Caesar arc and delivers a film ripe with meaning and subtext, an involving and often captivating primal dramatic narrative that has you actually cheering on the digitally rendered simian 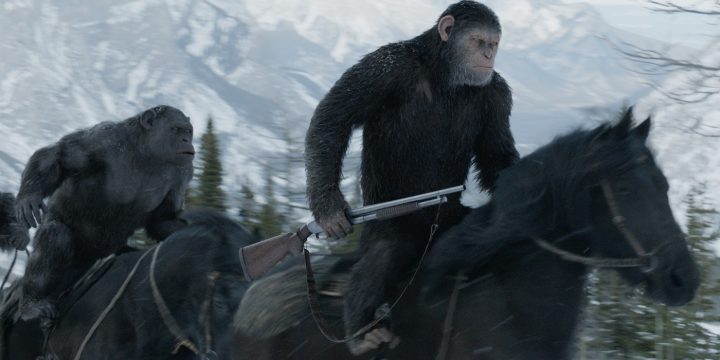 Following the events of Dawn, Caesar (Andy Serkis) and his intelligent apes live a relatively secluded life in the forest, although skirmishes with human military forces continue to keep their fledgling society on edge. After a brutal guerrilla attack by the forces of a mysterious Colonel (Woody Harrelson) which leaves wife (Judy Greer) and elder son dead, Caesar vows to seek revenge no matter the cost. Leading his tribe across the wasteland of Earth, he ventures towards the “border”, where a hermit ape (Steve Zahn) lives on the fringes of America, in order to confront and kill the Colonel. However, when the apes are captured and forced to build an enormous wall at the command of the Colonel, Caesar himself is forced into a battle of wills with their very existence the prize.

Few modern sci-fi film franchises tickle the grey matter quite like the current Planet of The Apes saga. Within a trio of hugely popular films, Caesar the ape, brought to digital life by both Andy Serkis via MoCap and the artisans at ILM, has become an iconic figure in the genre’s landscape. Much of this can be laid at the feet of the writing, which has remained strong across all three films (a rarity in itself, let’s be honest), but the lion’s share of the work in making Caesar and the apes’ world so identifiable and relatable is the direction of Matt Reeves and the performances of the ape-actors, particularly Serkis and, of all people, Steve Zahn here, in a new role for the trilogy. The Apes films are an obvious parallel to racism and human hubris, even from the Charlton Heston original one could see the manifesting of racial hatred within the framework of that film, and while this theme largely remains unspoken in the reboot saga, it remains a tangible element in spite of the darker, brooding nature of what transpires.

The Apes films have gradually become darker thematically throughout their journey: the original film is largely bright and sunny, for all its antics, and it’s only when the apes escape captivity and the simian flu virus begins its global pandemic does the film twist into a nightmarish scenario. Dawn’s colour palette was suitably muted to represent the decay of modern society and the fall of humanity, a lot of grey and concrete tones mixed with a hint of greenery. War’s overall look is of… well, a war film; the vibrant colours of the apes contrasts against the monochromatic style of the humans involved, namely soldiers and the virtual concentration camp the apes are held captive in for the second half of the film. There’s subtle nods to Auschwitz and World War II threaded throughout, and while the violence isn’t particularly gruesome in its depiction, the film is especially dark for the intellectual murmurings Reeves’ work throws up. 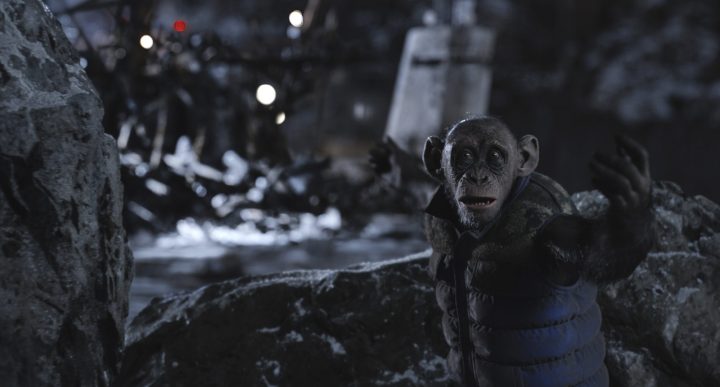 The film is written by Reeves and Mark Bomback, the latter of whom returns with Reeves after Dawn’s commercial and critical success, and while Bomback’s career also includes films like Deception (ugh), Race To Witch Mountain (cool) and the Divergent instalment Insurgent (blech), in his hands the apes and Caesar become tangibly enthralling participants in what can only be described as a nightmarish vision of a future not too far removed from the classic films. The writing in War – as it has been in all along – is terrific, mixing pathos, subtle humour (largely thanks to the inclusion of Steve Zahn’s bumbling Bad Ape), rage and sadness, the latter of which drive much of Caesar’s actions in this movie. His trajectory from the first film sees him assume a reluctant leader role, giving his tribe of apes a focal point, although the burden is heavy on his mind given his actions against Koba (a returning Toby Kebbell cameo here) in the previous film. 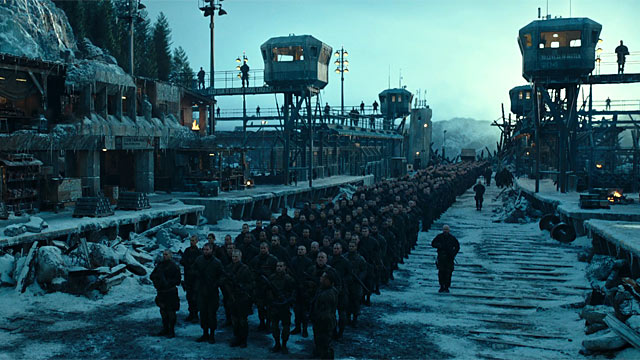 This reluctance shifts into revenge following the murder of his family, and as you’d expect the question of revenge-versus-survival arise and conflict against the ape’s natural inclinations. Caesar also has to weigh his personal desires against the responsibility of his role as leader, and it’s a thematic torture watching him wrangle with the concept. Much of the dialogue is signed by the non-speaking apes, with Reeves spending a lot of time focusing on the often silent communication between the group, although Caesar does give the subtitlers a break with his continued vocal English; through both silence and talking, the film is a fairly quiet one a lot of the time, content to allow the broad emotional moments to infuse slowly rather than pander to idiotic audience members and simply tell them what’s going on. A subplot involving the mutation of the simian flu, which renders humans unable to speak and regressing to a primitive state (basically the reverse of what happened to the apes in the first film) is a subplot I felt could have been utilised a lot more than it was here, but added a nice sense of symmetry to the trilogy and provided a nice resolution to Woody Harrelson’s odious Colonel character, for whom this whole bit came as his prime motivator. 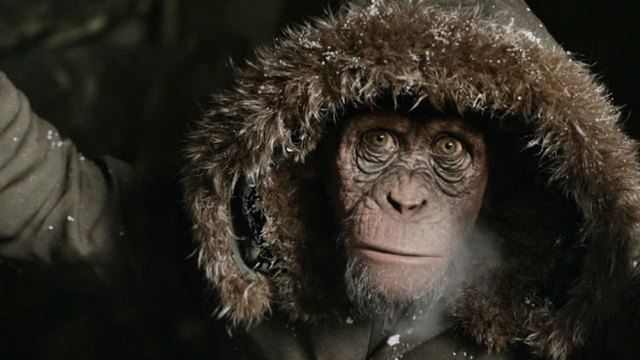 Reeves and Bomback give a hearty homage to Apocalypse Now’s plot which they use as the basis for their movie: the Colonel might as well be Marlon Brando’s Colonel Kurtz, sitting pretty at the end of a river surrounded by acolytes and desperately fending off unwanted military intervention. Caesar, providing the film’s variant of Martin Sheen’s Willard, voyages “upriver” in pursuit of the Colonel, intent on exacting revenge, finding tidbits of important story along the way. A young human girl, now mute thanks the to Simian Flu’s mutation, accompanies them thanks to a brief fit of social bravery by Caesar, while Bad Ape’s knowledge of the human base (a former weapons depot turned Helm’s Deep-esque fortified bunker) is essential to Caesar’s sense of vengeance. Even a touch of graffiti referencing the Ape-ocalypse hints at Reeves’ admiration of Coppola’s seminal war film. Yes, Joseph Conrad might be well pleased with War For The Planet of The Apes‘ narrative depth, for it is appropriately complex and well conceived, and delivered in an entertaining and thought-provoking manner by all involved.

Like it’s cinematic predecessors, the entire rebooted Apes trilogy hangs on the effects of the title characters; as with Dawn and Rise, the digital creation of the apes in this film is astonishing, and worth the price of a ticket alone. These creations are so lifelike, so textured and impossible to distinguish between artifice and reality, it’s absolutely gobsmacking. War should easily snag Best Visual Effects at all the awards shows this season, and if it doesn’t there’s a flaw somewhere. Reeves’ use of digital effects is by definition for a film like this essentially enormous, but unlike many (coughMichaelBaycough) he doesn’t showcase the effects simply for their own sake. Reeves has taken the school of filmmaking whereby effects are used to tell a story rather than be the story, and as with Dawn, War For The Planet Of The Apes is a showcase of digital artistry that might make your jaw drop, but never once feels like it’s showing off. And that, my friends, takes skill. 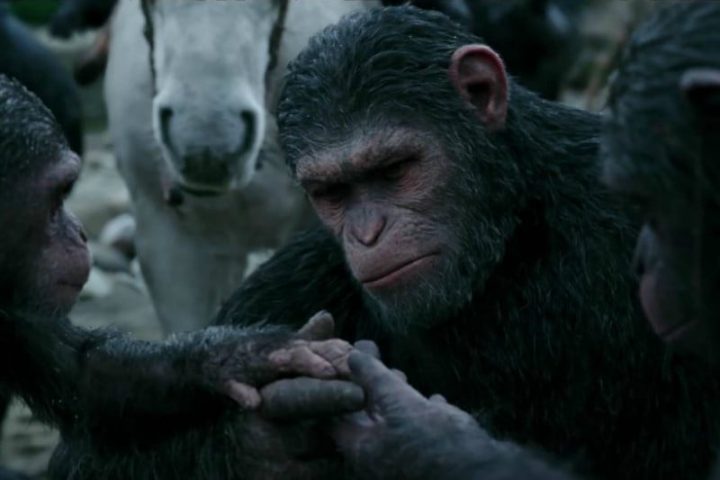 Again, Andy Serkis commits to a role unlike any actor working to-date, imbuing Caesar with all manner of inflections and emotive beats, each one magnified due to the pixeled work his face undergoes. Reeves allows time for Caesar’s magnificent emotional journey to unspool, giving the character plenty of close-up’s to maximise his money, and Serkis absolutely delivers a performance for the ages. The rest of the ape performers, particularly Steve Zahn (yeah, I know, it surprised me too) as Bad Ape, and Karin Konoval as Maurice the orangutan, all do superb work in bringing even minor supporting characters to life, while Harrelson and the nameless human characters personify desperate survival in the face of overwhelming odds. Harrelson’s snarling, embittered and patriotic Colonel is a complex character as well, which brings the conflict between he and Caesar into sharp relief as perhaps the most interesting of all antagonists in the entire franchise so far. 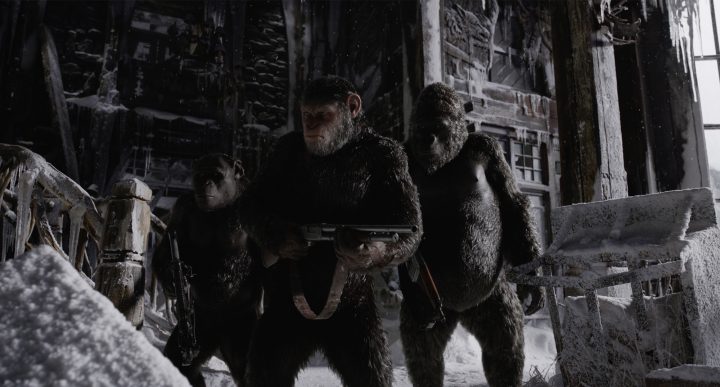 War For The Planet Of The Apes is operatic filmmaking at its finest. It offers both small and widescreen narratives, a global sense of arrhythmia for humanity and a Bear Grylls survivalist thriller for the apes, making the subtext and growth of Caesar as a leader as complete an arc as cinema has given us since the turn of the century. Statements about the Apes reboot trilogy being some of cinema’s finest overall storytelling aren’t wrong, and I add my own voice to the chorus giving Reeves and his team positive acclamation. War For The Planet of The Apes is brutal, violent, dark storytelling, yet feels almost hopeful in parts as it brings its audience along for a ride that doesn’t go where you think it might. Caesar’s part in this story might be done, but the foundation has been set for what I hope will be a lengthy and quality-assured continuing mythology for this franchise to explore.