There was a point during the early 00’s when my DVD of Stephen Sommers’ The Mummy, together with the sequel The Mummy Returns, were my go-to home theatre demo discs. They were also high on my most-played lists for the early part of Y2K. Revisiting The Mummy many, many years later (on Blu), the film remains an entertaining romp, although time hasn’t been as kind to its kitschy, bursting-at-the-seams visual effects. Boasting a young Rachel Weisz (this was her breakout role following low-key supporting appearances in films like Chain Reaction and Stealing Beauty), Sliding Doors’ alum John Hannah and then A-lister Brendan Fraser, The Mummy successfully rebooted Universal’s monster franchise with over-the-top action, hammy performances, and spectacular set-pieces that enabled multiple sequels and spin-offs (including an early Dwayne “The Rock” Johnson in The Scorpion King).

Adventurous American Rick O’Connell (Fraser) seeks glory with the French Foreign legion in Africa, where he meets up with fellow Legionnaire Benny (Kevin J O’Connor) to assist bookish Egyptologist Evelyn Carnahan (Weisz) search for the mysterious lost city of Hamunaptra, where it is believed to be the last resting place of Pharaoh Seti I. Evelyn’s brother, the scrupulous Jonathan (Hannah) joins them, where they accidentally unleash the underworld-bound mummy of the Pharaoh’s High Priest Imhotep (Arnold Vosloo) who begins to hunt for the reincarnated spirit of his ancient love, the Pharaoh’s mistress Anck-Su-Namun (Patricia Velasquez).

Unabashedly, I love The Mummy. Also, I love Indiana Jones, and this film owes more to Spielberg’s eponymous pulp adventure hero than Sommers might have envisioned originally, so revisiting The Mummy again made me chuckle and grin like an idiot the entire time I was watching it. The film borrows liberally from the 1933 original in terms of overall story, but adds in some genuine 90’s adrenaline and pulse-pounding action sequences that – while a touch clunky today – enthral and deliver spectacle and excitement in spades. Sommers was one of my “most anticipated” directors of the time, coming off one of the all-time greatest B-movies in Deep Rising (I’m yet to review it here, but goddam it’s cheesy-great!) and a solid live-action version of The Jungle Book in 1994. His sense of staging and energy behind the camera seemed to be attuned to my own personal proclivities as an action connoisseur, and so I came into The Mummy with much enthusiasm despite not having the same cinematic standards I do now. To wit: I knew almost nothing about the 1933 film from which this blockbuster shares its name and genetic foundation. 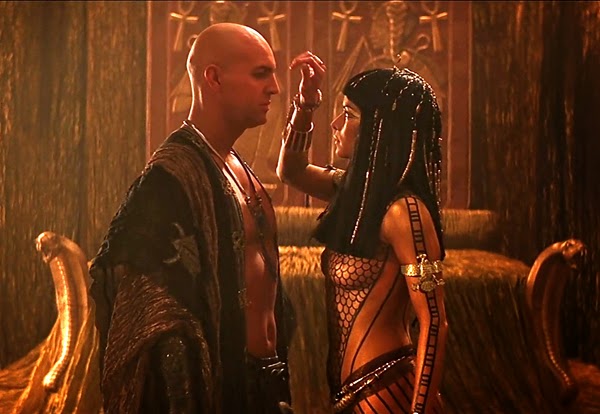 Whereas the 1933 Mummy was largely intellectual terror personified, the 1999 film is the very definition of the phrase “rollicking adventure”. The plot weaves itself into convulsions of exposition and character crossover, betrayal, romance and evil given a boost of hyperkinetic 90’s style through Sommers’ dusty sand-wiped lensing. The screenplay, by Sommers himself, embraces its sense of widescreen adventure, mysticism and high fantasy and runs with it; breathless, at times chaotic, and altogether cheesy, The Mummy makes no bones (ha!) about the fact that it’s as glorious a B-movie romp as the decade ever produced. Throw in an bombastic Jerry Goldsmith score and then-state-of-the-art CG effects (more on these in a moment), and you have a perfect distillation of 30’s aesthetic in a 90’s muscularity and a gloriously cheesy Hollywood affair that made us long for a new Indiana Jones film.

It helps that the cast, led by a solid Brendan Fraser and doe-eyed Rachel Weisz, look like they’re having an absolute blast: as they all rocket around Egypt on camels, sandstorms, bi-planes and early automobiles, spouting the most nonsensical Egyptian mythological exposition you’ll ever hear, The Mummy could very well have been too silly for its own good. But the wink-wink charisma of Fraser’s Rick O’Connell, as well as Arnold Vosloo’s hammy, snarling title character, are played straight, allowing the film to work in and of itself, while the audience can recognise its sly wit and camp-ness for what it is. Sommers knows he’s not making high art, so he doesn’t pretend to. Fraser’s adventurous hero archetype is pure Hollywood cheese; square jawed, morally upright and yet somewhat roguish, you half expect Harrison Ford to step into frame and claim some kind of copyright. Weisz is gorgeous, her galloping clumsiness both awkwardly charming and lovable, and altogether overplayed; Evelyn’s the prime motivator for the film’s narrative, being largely responsible for the emergence of Vosloo’s mummy in the first place, and her on-screen chemistry with Fraser is one of the film’s real highlights. Watching Jonathan Hyde, John Hannah and Omid Djalili clown about in their respective roles is equally as fun, while Sommers ensemble player Kevin J O’Connor does the “snivelling sorta-friend-sorta-villain” role with a tenacity and nuance that’s awfully hilarious. 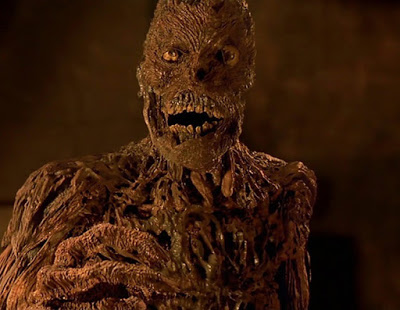 But you don’t walk into a Hollywood tentpole film like this for the characters, not really. You’re here for the effects and the action, and in the near-20 years (!) since the film hit cinemas, some of it holds up, and more than a lot of it does not. Sommers’ command of action is superb here, lacking the modern prevalence for shaky-cam or over-edited fakery, and the film is the better for it. Sprawling battle sequences and labyrinthine puzzle tombs, as well as the whirling sandstorm of the title character, Sommers captures it all with energy and surety, and with editor de jour Bob Ducsay (Vegas Vacation, Looper, Star Wars: The Last Jedi) the pacing and humour of the film just sings. Sadly, plenty of the CG effects no longer hold up – at least, not in full 1080p HD, anyway – and this is detrimental to the film only a touch. Animated CG skeleton corpse things attack Rick in the Imhotep’s tomb, a dervish of acting and pixel wizardry that just looks spectacularly bad compared to more recent fare: no doubt the technological limit was pushed back in 1999, but the overuse of this effect shows the cracks and its almost – almost – brings the film’s pulsating conclusion undone. There are still some effects that work well even now; Imhotep’s face inside a cresting wave of sand, as well as his appearance inside an apartment in Cairo, are sandy perfection and jaw-dropping when they happen. But the dry-corpse effect used to often throughout feels clunky nowadays, a nostalgic throwback to when CG was going to make live action humans redundant when it was patently obvious it wouldn’t.

Despite this, The Mummy is a hell of a lot of fun, a rollercoaster of laughs and scares, action and fantasy, and whatever your feelings on the 1933 original, this film is perhaps the most complete statement of the premise to-date. It riffs on the ’33 original, and yet goes someplace entirely new and different, and offers the audience a real escape from reality that doesn’t let up from almost the opening frames. Brendan Fraser makes a charismatic leading man (this is easily his best role, IMO), Rachel Weisz makes a definite impression, while the cracking action sequences are engaging and potent. This Mummy roars into action and doesn’t let up, and although it hasn’t aged well in some visual aspects, remains perhaps the best Mummy movie made to this point.