Fast cars and even faster women: there’s few films like Faster, Pussycat! Kill! Kill!, the seminal 60’s exploitation film directed by renowned titty-helmer Russ Meyer. Frankly, it’s an awful film, and for some reason has gained an inexplicable cult fame – perhaps deservedly so – but there’s a kitschy appeal about Meyer’s black-and-white direction and laughable script that works in a serendipitous B-movie way. It’s a film about angles: every second shot is designed to maximise the cleavage and sexuality of its trio of starlets, led by Tura Santana, who feel the need to wear skintight outfits through the Californian desert, so if you’re into big-breasted vixens and corny, laughable dialogue delivered in that rat-a-tat manner the sixties enjoyed, you’ll have a blast with this one. 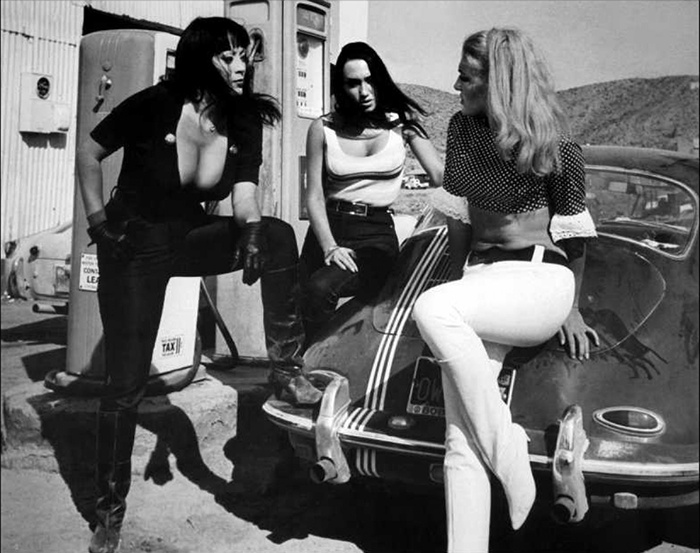 Three go-go dancers, Varla (Tura Santana), Rosie (Haji) and Billie (Lori Williams), are out in the Californian salt-flats racing their cars, when they chance upon a young couple, Linda (Susan Bernard) and Tommy (Ray Barlow), who are out to test Tommy’s car in a time trial. Violence ensues, with Varla breaking Tommy’s neck; fleeing, the trio kidnap Linda and discover an isolated farm inhabited by a supposedly wealthy father (Stuart Lancaster) and his two sons, one of whom is a dimwit (Dennis Busch).

There’s no denying the sheer awfulness of Pussycat’s overall rationale for existing. It’s a film designed to showcase the ample assets of stars Tura Santana, Haji (a Russ Meyer regular) and Lori Williams, all of whom sports particularly tight clothing (if any at all) throughout the film’s grindhouse story. Admittedly, one can watch this from the vantage point of history and admire its relative simplistic style, betwixt it’s horrifying misogyny and hilariously ripe dialogue, and enjoy the film for the time capsule it represents. Described by one reviewer in the 70’s as nothing more than soft-core porn (it isn’t, it’s nowhere near that) and lauded by fans of B-movie cinema in the decades since its release, Faster Pussycat’s allure is simply its sexualised violent underpinnings and larger than life central caricatures, none of whom are particularly likeable but all of whom are eminently watchable.

Meyer’s career in lowbrow exploitation cinema led to his epitaph partially reading  “King of the nudies: I was glad to do it!” so you keeping that in mind you know what kind of film Faster Pussycat is going to be. Hyper-sexualised, largely to the point of calamitous silliness, the film’s boobs-n-babes eroticism comes not from specific nudity or scenes of sexuality, but the raw femininity exuded by the quartet of females within it – the trio of modern exhibitionists in Varla, Rosie and Billie, and the bikini-wearing small-town gal (and unfortunate kidnap victim) Linda, and how Meyer reins them into his utterly bizarre get-rich-quick plot device. The opening narration (by John Furlong) specifically stipulates the long-held link between sex and violence, intimating to the no-doubt teenage audience who snuck into the cinema what they’re expecting to see.

Pussycat’s 60’s feel is derived largely from its cliche-ridden screenplay. The three lascivious vixens disperse all the classic American idioms of the period with the entendre-smooth delivery sultry sirens like them would enjoy: it’s a script overripe with subtext, both sexual and otherwise, and you almost get the sense Meyers delights in pushing the envelope of descriptive imagery through dialogue. Take this line from Stuart Lancaster’s dinner table exchange with Santana’s Varla: “What you eat seems to settle in the right places. But then you look to me like a girl with a big appetite for everything.” Dear Lord, it doesn’t get any more suggestive. It’s as if a film was made entirely from quotable lines written by Austin Powers. 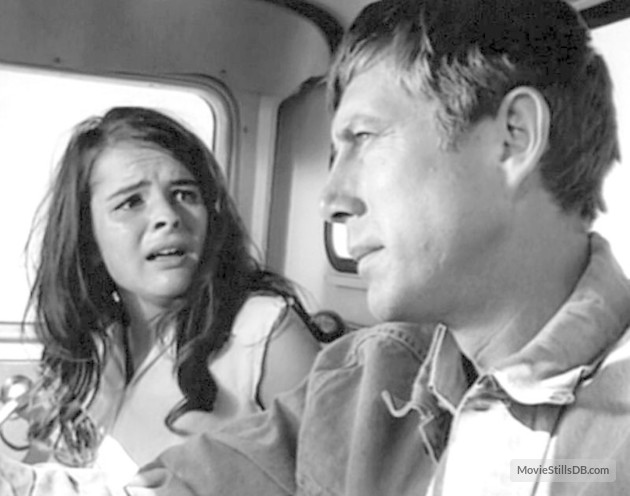 The amateur filmmaker in me had to laugh a number of times at Meyers’ clunky direction. To save time, every shot of people inside a moving vehicle is filmed against a stationary car that’s being rocked by some grip or production assistant off-screen. It’s a nostalgic element to the film that works wonderfully well, raises a chuckle, and somehow feels consistent with Pussycat’s cheap aesthetic. There’s also an absolute plethora of down-blouse and ass-shots in this film, to the point it’s embarrassing watching in company. Boobs present as a method of storytelling, somehow, with even then-16-year-old Susan Bernard’s lithe body coming in for a degree of attention by the cameraman. Meyers understood his audience (teenage boys, I gather) and plays for the cheap seats in every moment. The film’s bruising car chases and stunts are well shot (and acted, particularly by Tura Santana, who famously performed all her own stunts) and there’s just enough glimpses of side-boob and bareback women to make even the most staid viewer blush.

Shot in crisp black-and-white to save on costs, the filmmaker’s use of desert and isolated locations accounts for a very secluded sense of menace throughout the movie. What doesn’t work as well is the laboured, jarring musical orchestrations, overblown porn-esque melodies written by Paul Sawtell and Bert Shefter. Jazzy, bluesy, screeching delirium flits about almost constantly, a wailing, piercing music tone that never fits with the action in any way other than combative.

Quentin Tarantino has often cited Pussycat as a film that inspired him, and one can see elements of this film in some of his work, particularly his Grindhouse effort Deathproof. Indeed, much of both Tarantino and fellow trashploitation helmer Robert Rodriguez’s careers have been made off the back of similarly garish, subtlety-free affairs (Rodriguez’ Machete films elicit similar feelings of violent rampant excess, albeit to a far higher standard than Meyers was able to afford) and for the sheer fact of its influential nature and obvious sexual and violent depictions is enough to garner serious critical appraisal.

Faster Pussycat! Kill! Kill! is first class trash that delivers its salacious story with a vindictive, anti-establishment motif of feminine rage against the backdrop of virginal innocence. Sexually promiscuous women, dusty backwater locales and pulpy, greed-driven violence make for an enticing brew, and Pussycat’s particular brand of entertainment runs the gauntlet between hideously malformed and barley competent, replacing intelligence with a pulsating animalism and exploitative visceralness that’s alternately charming and horrifying. As a piece of American B-grade cinema, Pussycat is king of the hill, and Russ Meyer’s powers were pretty close to his peak here: the combination of Tura Santana’s buxom femme fatale and Meyer’s grisly, lewd cinematic prose makes for a film that’s the distillation of all that I love about this kind of cheesy visual claptrap.