When the first trailers for The Great Wall landed online, I, like many others, figured the film would be yet another White Saviour narrative a la The Last Samurai and Dances With Wolves. Matt Damon, one of the whitest white actors known to exist, starring in a Chinese-based film about Chinese mythology co-starring a battalion of Chinese acting talent, all directed by one of the industry’s most credentialed Chinese filmmakers, Zhang Yimou, looked for all the world like exactly the type of film popular culture rails against these days. Yimou, a filmmaker I’m relatively ignorant of aside from Hero and House Of Flying Daggers (both beautiful but emotionally weak films, in my opinion) brings the full box of tricks to this Hollywood-friendly action spectacle, yet despite the inclusion of Matt Damon’s bland-as-butter performance, The Great Wall remains largely ineffectual as a cinematic entertainment thanks to inept scripting and tonally inauspicious direction. 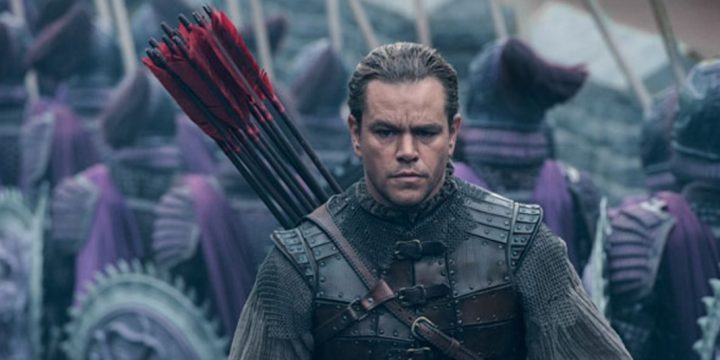 Damon plays mercenary William Garin, who, along with partner Pero Tovar (Pedro Pascal) travels through ancient China in search of magical black powder (gunpowder). Chancing upon the country’s famous Great Wall, Gain and Tovar find themselves in the middle of a battle between a legion of soldiers defending the wall against an advancing army of creatures who only want to slaughter them; proving their skill in battle, Garin and Tovar are granted a stay of imminent execution, and undertake to aide the army, led by Commander Lin Mae (Jing Tian), in their fight against the creatures’ advance, lest they overrun the nearby city and decimate the earth.

The Great Wall doesn’t start well. A chase, lumbered with slo-motion imposed for no apparent reason, guides us into the fray, before Damon’s battered and grimy William Garin plants his furrowed brow onto the screen in a mixture of confusion and awe. Exposition is rat-a-tat, with nuance and emotional weight absent and replaced by attention-grabbing expediency. Subtle, The Great Wall is not. It’s a strange mixture of fantasy and action, adventure and bonkers war film, and while trying to be everything, too often is nothing. Nothing special, certainly. Considerably not worth the whitewashing protests that accompanied it into cinemas.

Approximating the feeling of films such as Prince Of Persia and the Brendan Fraser Mummy movies, The Great Wall’s gaggle-and-platoon of effects and brimming Chinese casting makes for visually dynamic, sumptuous viewing; it’s the film’s emotional investment in character than things flail. The film’s screenplay, co-scribed by Carlo Bernardi, Tony Gilroy and Doug Miro, puts our heroes into harms way almost constantly, giving their respective backstory and arcs minimal development other than what’s needed to move the story along. Damon’s character transitions from rebellious scoundrel to morally-upright hero within the blink of a pointless story twist, while Pedro Pascal’s less upright Spaniard, Tovar, lacks even the most basic empathetic undertones. Willem Dafoe, about the only other actor in this film who isn’t of Asian descent, plays a grizzled, conniving Westerner who knows the secret of the black powder (and can translate a lot of the Chinese dialogue for us, handily), but even he can’t elevate his role beyond sidebar pot-stirrer.

The beautiful Jing Tian plays Damon’s semi-romantic interest, the leader of the army guarding the wall, Lin Mae. Tian’s glowering sensuality is buried beneath armour so gorgeous it reminded me a lot of the Elf stuff in Lord Of The Rings. Production design is among the strongest elements of this film, particularly costuming and the spectacular sets, which are of a high standard indeed. Aiding this is some terrific cinematography by Stuart Dryburgh and Zhao Xiaoding, giving the movie an ethereal, romanticised feeling of pre-history; if only the creatures dominating much of the film’s action sequences were quite as well developed. The visual effects are functionally impressive, although nowhere near a patch on Westernised Hollywood blockbusters like Transformers. 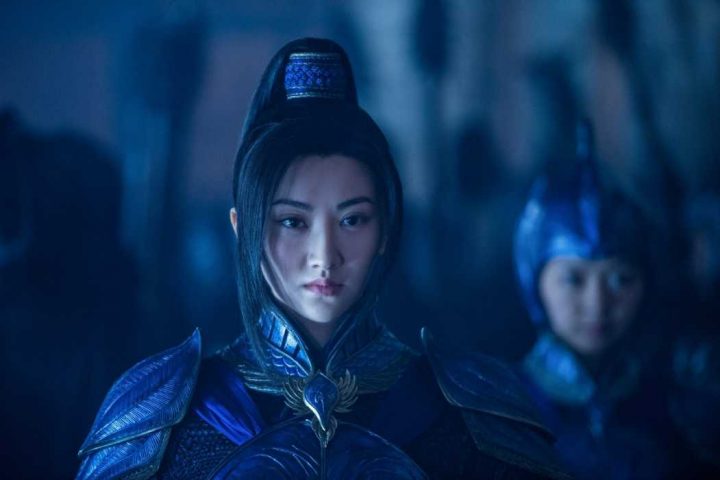 The creatures, named “Tao Ties”, are typical genre hive-like monsters, controlled by a Queen, so the mission to destroy the Queen and thus defeat the monsters is awfully generic (and reduces a lot of the film’s tension, because you kinda know how it’ll all end up), but offers effective design work nonetheless. They’re never frightening, not really, and Zhang Yimou’s tonal imbalance resolutely keeps them at a distance in terms of threat – the characters all say they’re deadly dangerous, but aside from the swarming herd (similar to World War Z’s zombie effects – one of the producers on this film actually developed that Brad Pitt enterprise, so similarities are amusing indeed) looking impressive, their impact in terms of amping up adrenaline is indifferent.

It’s pleasing that my fears about the film’s “white saviour” narrative proved unfounded. Damon’s character isn’t some all-knowing superhero who single-handedly defeats the threat – in actuality, he’s pretty much lost without his Chinese allies on-screen, and never once does hubris or arrogance attempt to do otherwise. The Great Wall’s narrative is mundane, the direction is graciously beautiful without emotional resonance, and aside from solid production value the film’s inert adrenalized momentum robs the film of otherwise well-deserved kudos. As a slick, highly fantasized blockbuster there’s elements of The Great Wall that really work. Unfortunately, the bits that work do so independently of each other and never add up to a quality whole.