Since his return from governing the state of California, the Austrian Oak’s film resume has resembled a schizophrenic approach to latter-day projects, most obviously represented in the legendary action star’s appearance in the Expendables movies, to say nothing about Escape Plan and The Last Stand. In keeping with his more restrained on-screen persona these days, Arnie has also embarked upon a series of more dramatic projects, stretching himself as an actor rather than a gun-totin’ hulk slaying all before him. Maggie, for example, is an attempt at a more mellow, emotional portrayal for Arnie, while David Ayer’s fumbling Sabotage tried to being humanity to an otherwise unlikeable character. Aftermath is another attempt to bring dramatic width to Arnie’s late stage career, a story based off a real-life tragedy occurring in 2002, and grafted onto Schwarzenegger’s particular brand of screen charisma. While it doesn’t always work, Aftermath’s entrenched sombre human story is soul-destroying on so many levels, and affects the viewer in any number of ways.

Schwarzenegger plays Roman Melnyk, a construction worker whose wife and pregnant daughter are killed in a mid-air jetliner collision. Air traffic controller Jacob Bonanos (Scoot McNairy – Batman V Superman), who was in the tower at the time of the collision, finds himself investigated and blamed for the event, with his relationship with wife Christina and son Samuel (Judah Nelson) deteriorates in the weeks and months afterwards. Eventually, Melnyk discovers Jacob’s identity and seeks him out, hoping to avenge the death of his family and find some kind of peace.

Aftermath marinates the idea of human error and the desire for apportioning blame in the event of tragedy. Modern justice appears to favour the criminal more often than the victim or the victim’s families, and law courts are littered with the stories of those who appear to have “gotten away with it” by most liberal social standards. But what about accidents? What about pure human error, the kind that leads to impossible anguish and lives torn apart for a simple split second of inattention or ignorance? Our desire to blame people we feel responsible for tragedy – in this case, Jacob Bonanos, the poor guy who makes an all-too-human mistake on night and causes the deaths of hundreds of people – leverages the weight of aggrievement with that of revenge. It’s an intriguing narrative in which Aftermath develops, the passage of time doing little to dilute the searing hurt something like this might generate.

Written by Javier Gullon, Aftermath’s dual-character arc is both prescient and hard-hitting: neither Jacob nor Roman are bad people, they’re just victims of a mistake, an oversight. The film offers empathy for both men, as they attempt to reconnect with their humanity and lives following the accident. Roman, seeking an end to the pain of loss, searches for an apology for the death of his wife and daughter, whilst Jacob suffers with the burden of knowing he’s ultimately responsible for what happened. Jacob, to his credit, never tries to redirect the blame, but the guilt of all that carnage sends him to the brink – eventually, he moves state and changes his name, but thanks to the investigations of a journalist, Roman discovers his address and begins to seek him out. The tension within Gullon’s screenplay develops primarily as an almost unavoidable collision (pardon the pun) of guilt and rage, and the inevitability ratcheting up the frisson of dramatic detonation in a manner both understandable and torturously developed. 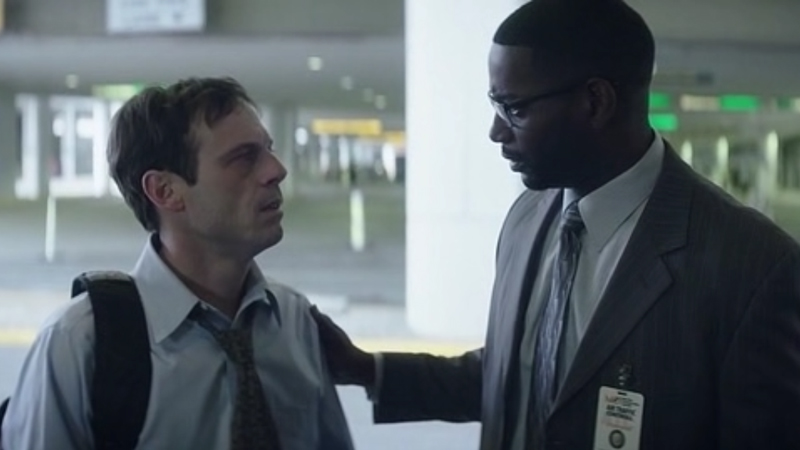 Elliot Lester’s direction of Aftermath is restrained and strong, giving both Schwarzenegger and McNairy, who handle the respective emotional journeys with depth and nuance, the width to do so without resorting to overblown melodrama. Aftermath is an inherently sad film, a fact we’re almost suffocated with as the pulsating score (by Mark Todd) and Pieter Vemeer’s crisp, dusky-toned cinematography seek to add weight to the dark human story. It’s almost unimaginably unfathomable to those of us who’ve never experienced it, and only adds to the weight of the film’s performances that they’re rooted in a truth that could have happened to any of us.

I guess you’re reading this to determine if Arnie’s performance is any good or not. It is good, and much of the film’s sense of justice hinges on whether or not we can empathise with Roman’s justification for what he does. Arnie’s subtle, fatherly countenance here engenders all kinds of sympathy, a man lost in grief and utterly unable to find a way out, and the film is better for it. McNairy, in turn, captures the hollow terror of knowing you’ve caused unimaginable tragedy with sweaty, tingling disbelief, and while neither have much screen time alongside the other, their disparate arcs through the film seem to echo each other almost unknowingly. Maggie Grace’s turn as McNairy’s on-screen wife is typically underdeveloped for this kind of moody, atmospheric think-piece, while the film’s sudden, jarring ending feels anticlimactic when consideration is made of the preceding 80-odd minutes. If anything, the film’s final few minutes actually detract from what would have been a first-rate film had it ended slightly earlier, but I can understand the resolution Lester and Gullon were aiming at even if it felt a touch hackneyed.

Aftermath is solid, meaningful cinema, dissecting the weight of victimhood and guilt alongside the need by people for justice – or in Roman’s case, an apology. It’s not an easy film to watch purely because of the immediacy of its plot, nor is it one that answers questions with any sense of finality; the film’s statement about abrogation of blame, or at least smothering it with obfuscation, is frustratingly pointed, while the lack of apparent assistance for both Roman and Jacob in the white-hot moment of grief mirrors much of what we see in modern tragedies, both the smaller ones and those that affect many. Aftermath makes its point inside of 90 minutes (although it feels longer), and delivers it with commendable panache and an aversion to histrionics. Well worth a look.