For the purposes of reviewing Passengers accurately, this review will discuss specific spoilers. Plot points and the film’s key twist are revealed.

Passengers is an awfully creepy movie. It’s beautiful, sure, and watching two beautiful people like Chris Pratt and Jennifer Lawrence for two hours isn’t exactly a chore, but the altogether icky central premise (of which we’ll be discussing after the jump in considerable detail) makes one’s forehead crease in that way one does when one considers infanticide a viable option for population control. Passengers attempts to amplify deeper issues than it’s truly prepared to tackle – isolation, humanity, companionship, the solitude of interstellar travel – things Christopher Nolan briefly touched on in Interstellar, I might add, but it does so with the adequacy of mediocrity, never with acuity or a sense of the sublime. 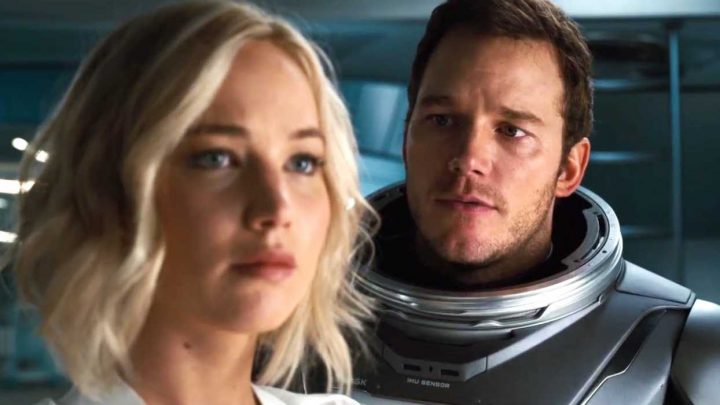 The starship Avalon is mid-flight between Earth and a new planet to colonise, Homestead II, when an accident wakes one of the 5000 sleeping colonists, mechanical engineer Jim Preston (Pratt). Alone aboard a vessel designed for luxurious comfort, Jim becomes suicidal after nearly a year without human contact or company. However, one evening he stumbles upon the sleeping pod of the beautiful Aurora Lane (Lawrence), the daughter of a famed author. Jim, knowing the Avalon is still some 90 years from its destination, decides to wake Aurora up, only without telling her his motives. Eventually, Aurora falls for Jim, before the ships robotic bartender, Arthur (Michael Sheen) accidentally reveals the truth, tearing the pair apart. Meanwhile, continued ship malfunctions revive another ship crewman, Gus (Laurence Fishburne), but the problems for the Avalon are only just beginning.

Passengers purports to be a space drama, very much establishing a Cast Away in space narrative involving Pratt and Lawrence spending months and years aboard an iShip bound for some galactic utopia. As with most space-things, time and distance are problematic for humans, as the time it takes for somebody to get from here to, say, a far distant galaxy, is prohibitive, even at the speed of light (and the Avalon only travels half that speed), so when Jim Preston is woken with some 90 years of travel ahead, he makes the resolute decision to spend his time going slowly insane. Okay, hardly resolute – he goes insane over the course of a year alone aboard the ship. With only Arthur, his trusty yet magnificently distant android bartender, to talk to. Yes, Pratt goes full Robinson Crusoe, and at times it is magnificent.

Then, of course, comes the moment the film has spent dividing viewers – Pratt’s character falls for a hibernating co-passenger, and the moral quandary arrives. Does he wake her, knowing there’s nearly a century of travel still to come, effectively sentencing her to die aboard with him, or does he forgo human company and spend his final years alone? It’s a terrific dilemma, and one the film tragically underuses, suffocating potential dramatic potency for a substantive romantic arc that feels more like melodrama than compelling examination a film like this ought to capture. The agony of Parsons’ decision is spent in conflict between potential company and absolute suicidal agony (Jim actually hovers over an outer airlock momentarily, considering whether to simply end it all in the blessed vacuum of space) is exquisitely captured, as is the inevitable revelation to Aurora some months later once the pair have grown close.

There’s a brilliant line of dialogue in which Pratt asks Martin Sheen’s affably diffident bartender what he’d do if he was trapped on a deserted island, but had the option to whisk somebody there for company, only it would also maroon that person as well, would he do it. I suspect the moral quandary would be answered “of course not” by the vast majority, almost off-hand, but consider the fate of Tom Hanks in Cast Away, and what he’d have given for anybody other than a busted volleyball for company. The key difference here is that the Avalon is essentially a luxury liner, where every whim and need is catered for (similar to Wall-E’s spacefaring vessel, in which humanity has grown fat and incoherent) so the pleasures of life are not an issue, but rather the lack of human contact.

It’s here that Passengers does rise to its conceit, offering an interesting insight into what is effectively hugely comfortable solitary confinement. It’s still confinement, however, and the film makes critical point of ensuring we understand Parsons’ loneliness. His actions in reviving Aurora aren’t born out of simple, horny lust, but driven by a deep desire for contact with another person; if nothing else about Passengers works, this element most surely does. Jennifer Lawrence’s reaction to discovering her waking wasn’t an accident is brilliant and excruciatingly well played: suddenly, as an audience, you’re dead set ready to punch Pratt in the face for doing what he does, counter to what you were thinking barely twenty minutes earlier. This is particularly clever by director Tyldum (The Imitation Game), although as shiny and clever as the setting is, once this plot point plays out, the film lurches into fairly banal sci-fi hokum and cliche.

When it isn’t tackling humanism as its chief subject matter, and focuses on the Avalon’s gradual shutdown and problematic failures, Passengers plays as big and wide as any Hollywood flick before it. Visual effects are solid, the expansive sets and design work for the ship and it’s structure is indeed marvellous, but filling an enormous structure like the Avalon with two tiny (admittedly gorgeous) human beings for the film’s two-hour running time (not including a brief cameo by Laurence Fishburne) seems wasteful. Tyldum isn’t wasteful with his direction, nor is he visually flat with his camerawork, and at times there are moments within Passengers where it reaches an almost Kubrickian level of shock and awe (the Avalon itself is wonderfully designed), but the hokum within it never works as well as it might. It’s hard to put my finger on what I found lacking in Passengers’ dramatic thrills, but the empty feeling of time being wasted rushed over me when the credits started to roll.

Passengers engineers itself into raptures trying to be all things to many people; one part dramatic introspective drama, one part romantic melodrama, and a third part sci-fi thriller (that beggars contrivance, seriously); while it lacks depth to really go hard on some key themes, it’ll while away the time nicely for those not wanting to think too hard about how creepy Pratt’s decision to wake Jennifer Lawrence up truly is: he’s a weird space-stalker with a hard-on for blonde babes, I guess. Sadly, the film flounders considerably, unable to make up its mind what kind of film it wants to be, and while flashy visuals and the diverting hotness of the Pratt/Lawrence combo might sell tickets, the end result is a film that feels as flavourless as the aesthetically pleasing yet utterly antiseptic set design of the ship.