It’s rapidly becoming apparent that a new film from director Denis Villeneuve (Sicario, Prisoners, Enemy) is an event not to be missed. Solidifying his reputation for creating intelligent, artistically challenging, emotionally resonant cinematic works, Villeneuve’s Arrival is not only one of the best films of 2016 but could mount a solid argument as being one of the best sci-fi films of all time. Marked by a superb performance by Amy Adams, as well as exquisite visual effects and an affecting story that slams home its gut-punch mid-film reveal, Arrival’s themes of loss, grief, tension and hope are subtly delivered in a melancholy, haunting essay on what it means to be human. 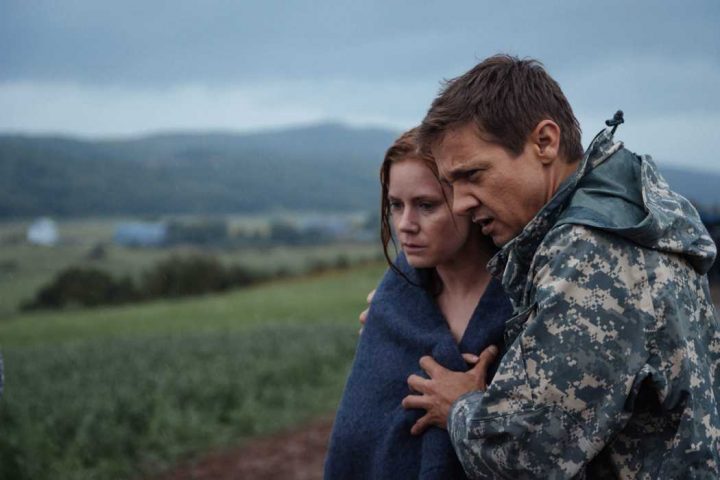 Adams plays linguistics lecturer Louise Banks, who finds herself seconded by the military following the arrival of twelve enormous spacecraft in different corners of the globe. Banks, working with theoretical physicist Ian Donnelly (Jeremy Renner), works to decipher the aliens’ language, a transcendent form of symbols that could possibly unlock human understanding of the Universe. The military commander overseeing the programme, Colonel Weber (Forest Whitaker), believes in safety and security first and foremost, although he is willing to work with Louise despite reservations as to the alien’s intentions. However, the belligerent Chinese commander, General Shang (Tzi Ma) takes a different, less peaceful stance, threatening to go to war with the aliens if they do not leave humanity alone. Louise and Ian race against the clock to unlock the aliens’ mysterious language before the chance of understanding is lost.

Were Arrival to.. er, arrive twenty or thirty years ago, there’s little doubt we’d be discussing it in the same rapturous tones as 2001: A Space Odyssey, Star Wars or The Matrix. Generationally significant films in a genre don’t come along often, and when they do we must be prepared to recognise them and applaud them for what they achieve. It’s my belief that Arrival belongs with such hallowed company. It may not boast the spiffy visual effects bombast of Star Wars, or the mind-bending philosophical underpinnings of The Matrix, nor the warp-drive epoch-spanning mystery of 2001, but Arrival offers not only a compelling emotional narrative but a distinctly taut, occasionally terrifying intellectual one. It’s a big call for such a recent film, but I’m of the opinion that Arrival’s sublime transcendence as a film will ensure its longevity in genre discussion for decades to come.

Villeneuve is a director with a particular visual style. Mixing one-part Terrence Malick (blech), several parts Christopher Nolan and Stanley Kubrick, and a smidge of Steven Spielberg, Villeneuve’s aesthetic is crisp, cool storytelling delivering precision technicality and, in what can only be described as something of a wonder, enthralling human drama. Those of you who’ve beheld the magnificence of Sicario, dwelt in the darkness of Prisoners, or argued the point about whatever Enemy was about, will understand that the man is the thinking-person’s blockbuster director, offering more than simple explosions and empty visual effects. Arrival evokes echoes of films as diverse as The Day The Earth Stood Still, Close Encounters Of The Third Kind, Robert Zemeckis’ Contact, and even Kubrick’s 2001 to a degree, but rather than simply homage those films it mixes them into something refreshing, something unique within the medium. It makes Arrival into actual moving art.

Key to the film’s emotional core is Amy Adams, as Louise. The film depicts her as something of a lost soul, ostensibly having recently lost her teenage daughter to cancer. Bereft of focus, her life lecturing at the nearby campus is cut short by the arrival of the aliens, and her mandate to unlock the riddle of their language. Adams inhabits the role with a mix of fragility, barely-hanging-on distraught solitude, and strength. The film delicately obfuscates Louise’s past with her memories of her lost daughter, from infancy (which opens the film) to her passing a few minutes later, and threaded throughout the film until its resounding conclusion. It’s less a specific history than it is a carefully emotional palette on which we feel her sense of loss. Louise’s baffling indifference to the aliens’ arrival isn’t really dwelt upon until later in the film; and while bordering on spoilers, the way the film weaves in her daughter Hannah is one of the strongest pieces of narrative bait-and-switch I’ve seen in years. Adams gives a terrific performance, perhaps her best to-date, while she’s supported by an unflinching Jeremy Renner, as Ian, and a solid Forest Whitaker in a thankless militaristic role. 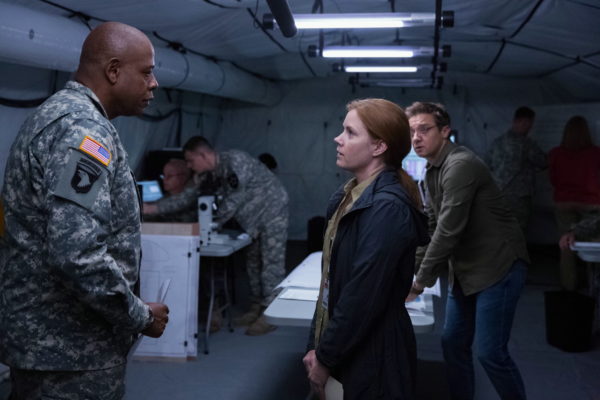 The mystery and enigma of the film’s labyrinthine narrative resolve is chief in giving the story its operatic feel. Alternating between tragedy and hope, Arrival’s sense of tension and impending global holocaust seems torn directly from this decade’s political playbook. Arrival is believable, or at least it would be were aliens to actually arrive. Humanity’s great fear of annihilation from beyond the stars saddles us with the uncomfortable sense that somewhere, somebody isn’t going to be as altruistic as Louise and Ian are about the whole thing – remember that bit in Contact where a nutty Jake Busey sabotaged the alien device? Something similar happens here… – and it’s this fear, whether overt or not, that Villeneuve works through the entirety of the movie. Wisely, Villeneuve plays the film exceedingly close to Louise, refusing to give us too many glimpses at things occurring of which she’s unaware; as she learns, we learn. If anything, Arrival is entirely small in focus, while playing as wide and global in effect as it can.

Villeneuve’s direction is superb: eschewing kinetic camera moves and threshing-machine editing for gliding, smooth, locked-down style, he gives Arrival a sense of menace within its blue-hued framework. Are the aliens benign? Are they malevolent? The film never really answers that until the last possible minute, although in truth the question should really be whether we are benign or malevolent. Villeneuve handles the titular arrival with a foreboding sense of grandiose terror, evoking Independence Day for the reaction humanity might have were this to actually happen. It’s played for real, lacking gaudy sci-fi tropes or pop-culture soundbites simply for their own sake; Arrival is a film about first contact, delivered with the appropriate sense of curiosity and abject fear.

Few films in the sci-fi genre tackle such humanistic themes as well or as compelling as Arrival. Even fewer belong in the vaunted pantheon of legitimate “greats”. Arrival is a transcendent cinematic experience, the kind of film people will discuss, dissect, review and re-review for as long as film exists. It’s beautiful both visually and intellectually, a portrait of our fundamental fragility without approaching melodrama or trite, genre excessive heavy-handedness. Villeneuve dazzled with Sicario, and he’s outdone himself with Arrival. It’s a piece of cinematic artistry that deserves to stand alongside the legendary entries into the genre. A brilliant, beautiful film.

Dan The Man enjoyed it: “While it’s still thrilling and sometimes unpredictable, it’s not dark, it’s not dreary, and it sure as hell isn’t ultra-violent – it’s actually quite heartfelt and inspiring.”

Ruth gave it a glowing summation: “Whether or not this will be a sci-fi classic remains to be seen, but without a doubt this is one of the best films of the year.”

Lyndon Wells thought: “I would recommend seeing it, but it’s far from a five-star masterpiece.”